William Clothier Watts began painting early and, by the age of 18, he had exhibited at the Pennsylvania Academy of Fine Arts (PAFA) where he also studied under Thomas Anshutz and Robert Vonnoh. From 1889-1946, he exhibited at the PAFA Annual Exhibitions over 25 times. Watts also exhibited at: the California State Fair (where he received first prizes five times) and at the Carmel Art Association in (1946,1952,1967), the Panama-Pacific International Exposition in San Francisco in 1915 (silver medal), the Golden Gate International Exposition in 1939, the Art Institute of Chicago in 1923–25, 1929, among many prestigious museums and art galleries. Watts settled in Carmel in 1915, buying a property in Carmel Highlands where he built a house and studio overlooking the Pacific Ocean. An early and active member of the Carmel Art Association, he was also a teacher, exhibitor and judge for many exhibitions held at the Carmel art colony. Watts traveled widely and painted throughout the world. His journeys included North Africa (Morocco, Tunisia, Egypt), the Mediterranean (Greece, Syria, Jordan, Palestine), the Balkans (Bosnia, Serbia, Dalmatia), Northern Europe (Norway), Asia (China, India, Burma) and other exotic places. He also worked extensively in the Carmel and Big Sur areas, Arizona, New Mexico and other Southwest and East Coast regions. His vibrant studies of the places he visited capture their essential spirit and constitute a valuable record of significant historical and geographic sites. In addition to the Carmel Art Association, Watts was a member of the Philadelphia Sketch Club, the Philadelphia Watercolor Club and the California Watercolor Society. Over the course of a long career, Watts exhibited widely and with success and was the recipient of numerous prizes, medals and juried awards. 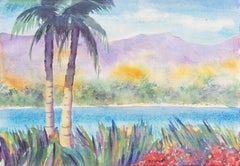 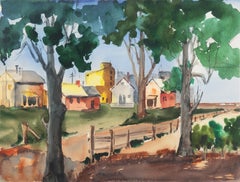