William Langson Lathrop, deemed the Father of the New Hope Art Colony, was born in Warren, Illinois. He was largely self-taught, having only studied briefly with William Merritt Chase in 1887 at the Art Students League. Lathrop first moved east in the early 1880s and took a job at the Photo-engraving Company in New York City. While there, he befriended fellow employee, Henry B. Snell. The two men became lifelong friends and ultimately, both would be considered central figures among the New Hope Art Colony. Lathrop’s early years as an artist were ones of continuing struggles. His efforts to break through in the New York art scene seemed futile, so he scraped enough money together and traveled to Europe with Henry Snell in 1888. There, he met and married an English girl, Annie Burt. Upon returning to New York, he tried his hand at etching, making tools from old saw blades. Even though his prints were extremely beautiful, he remained impoverished.

Lathrop would return to his family in Ohio, before once again attempting the New York art scene. In 1899, with great trepidation, he submitted five small watercolors to an exhibit at the New York Watercolor Club. He won the Evans Prize, the only award given, and four of the five paintings were sold the opening night. At age 40, Lathrop’s career would finally take off as he became an overnight success. Lathrop came to Phillips Mill for the first time in 1898 to visit his boyhood friend, Dr. George Marshall. Shortly after, he and his family purchased the old miller’s house from Dr. Marshall. The Lathrop’s home became a social and artistic center for the growing New Hope artists’ community. Tea and fascinating conversation were the “order of the day” every Sunday. This was a scene fondly recalled by many younger art students who Lathrop taught privately at Phillips Mill. It was common to see groups of his students painting and sketching along the banks of the canal or aboard his boat. He had previously taught in the Poconos and at the Lyme Summer School in Lyme, Connecticut in 1907, but Phillips Mill always remained Lathrop’s permanent address.

In 1928, a committee headed by Lathrop was formed to purchase the old Phillips Mill building as a place to hold community gatherings and art exhibitions. The committee had success and in 1929, the Phillips Mill Community Association was formed. This became the center of the New Hope Art Colony, holding annual exhibitions, and continues its operations today. In 1930, Lathrop built a sailboat, which he named the “Widge”. For eight consecutive seasons, he sailed it along the coast of Long Island, painting as he cruised. In 1938, while trying to ride out a storm off of Montauk, he died aboard his beloved “Widge” during the hurricane. Lathrop is remembered not only for his leading role as founder of the New Hope Art Colony, but as one of the most talented artists to emerge from this group of painters. His atmospheric and tonalist works as well as his colorful Impressionist landscapes are highly sought after by collectors. Relatively prolific throughout his career, Lathrop’s paintings still remain one of the greatest values among the important New Hope painters. His work is in the permanent collections of over 20 museums throughout the United States. William Lathrop exhibited at the Pennsylvania Academy of the Fine Arts (1922 Gold Medal), the Art Institute of Chicago, the Boston Art Club, the American Watercolor Society, the New York Watercolor Club (1899 prize), the National Academy of Design, the Philadelphia Art Club (Gold Medal), the Society of American Artists (1899 prize), the Worcester Art Museum (1904 prize), the Corcoran Gallery Biennials and the Panama-Pacific Exposition in San Francisco (1915 Gold Medal).

"The Old Pasture"
By William Langson Lathrop
Located in Lambertville, NJ
Jim’s of Lambertville is proud to offer this artwork. Signed lower right. Complemented by a hand carved and gilt frame. William L. Lathrop (1859-1938) Deemed “Father of the Ne...
Category 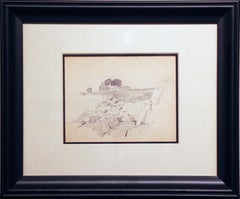 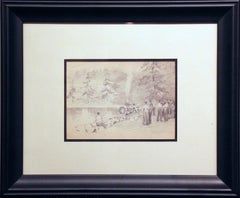 H 25 in. W 22 in.
"Summer Clouds"
By William Langson Lathrop
Located in Lambertville, NJ
Jim’s of Lambertville is proud to offer this artwork. Signed lower right. Complemented by a hand carved and gilt frame. William L. Lathrop (1859-1938) Deemed “Father of the ...
Category