William Sanderson, born in Dubbeln, Latvia, emigrated to the United States at the age of eighteen. He settled first in New York City where he studied at the National Academy of Design and the Art Students League. Following his studies, Sanderson worked as a book and magazine illustrator. His work appeared in several popular publications including The New Yorker, Esquire and The New Masses. In 1937, Sanderson was honored with a solo exhibition held at the Contemporary American Artist Gallery in New York City. After World War II, Sanderson relocated to Denver where he was hired by Vance Kirkland to instruct in advertising design at the University of Denver. He remained with the University from 1946 until 1972. In Colorado, Sanderson became active in the artist community, co-founding the Denver based organization known as the Fifteen Colorado Artists. Sanderson painted in a variety of styles, including Cubism, Social Realism and Hard-Edge Abstraction. His work often depicts architecture, ships, nature and the common man. In 1977, Sanderson donated a collection of forty paintings to Northeastern Junior College in Sterling, Colorado. The paintings remain on permanent display at the college in a gallery bearing his name. 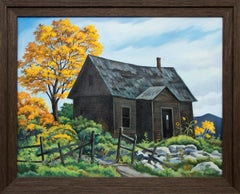 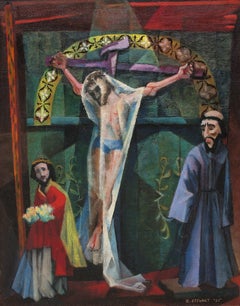 The Oracles Decree All Men Are Equal
By Edward Marecak
Located in Denver, CO
Category

Edward Marecak
The Oracles Decree All Men Are Equal, 1968

H 21 in. W 35.75 in.
The Shotgun Wedding
By William Sanderson
Located in Denver, CO
Custom frame is included; framed dimensions are 18 x 12 inches. About the Artist: William Sanderson, born in Dubbeln, Latvia, immigrated to the United States at the age of eighte...
Category