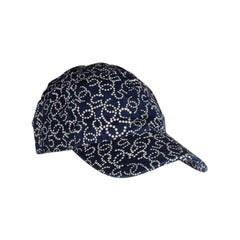 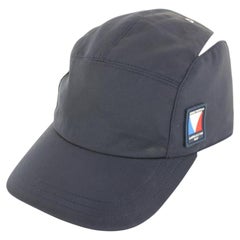 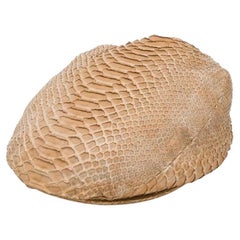 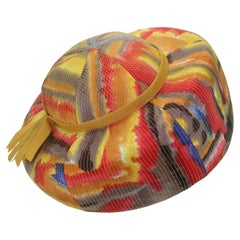 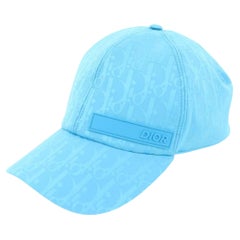 Chanel Tan Straw CC Fedora Hat S
By Chanel
Located in Dubai, Al Qouz 2
The straw construction, wide brim, and contrasting trims come together to create this Chanel hat. Fedora is one style essential that has never gone out of the fashion scene. They con...
Category

Dolce & Gabbana Leather Cheetah Print Fisherman's Cap
By Dolce & Gabbana
Located in Scottsdale, AZ
This Dolce and Gabbana Hat is a perfect addition to any outfit. Adding a fun print to upgrade any outfit, this hat does just that. The D&G leather cheetah print fisherman's cap is a...
Category

1920s Ladies Boater Hat
Located in San Francisco, CA
1920s Art Deco Ladies boater hat of handwoven straw that has been tinted a cocoa brown color. The shallow crown of the hat is decorated with a multi-striped and colored grosgrain hat...
Category

Jack McConnell Orange Petal Hat with Rhinestones
By Jack McConnell
Located in Los Angeles, CA
This Jack McConnell hat is composed of orange petals a-top a mesh base. The petals are adorned with rhinestones. The hat is in good condition for design inspiration and as a collecto...
Category

Star Spangled Sequin Straw Hat
Located in Atlanta, GA
The stars and stripes get all glammed up in this Sonni of California hat designed by Michelle McGann, the 'hat lady' of professional golf. Ms. McGann has become known not only for h...
Category

1950s Japanese Emerald Green Satin Zig Zag Graphic Hat W/ Dotted Veil
Located in San Francisco, CA
A fabulous 1950s statement hat, most likely from Japan. This emerald green satin stunner is stiffened and molded to fit the front of the head and is lined with a traditional Japanese...
Category

Ultra Stylish 1940's Rose Kraysler Sheared Beaver Fur Hat
Located in Atlanta, GA
Soft and stylish...this Rose Kraysler hat from the 1940's is so fun to play with. The body is made from a neutral mousey brown wool felt and trimmed in sheared beaver fur creating t...
Category

Hermés Fedora Hat
By Hermès
Located in Scottsdale, AZ
For the ultimate Hermés lover! Circa 21st century, this beautifully structured fedora is crafted from ultra soft rabbit felt with a rouge red finish. Around the base of the crown is ...
Category

FENDI Ski Helmet
By Fendi
Located in Paris, FR
Tribute to Karl Lagerfeld, who has worked for Maison Fendi since 1965. Polymer helmet, multicolored, adjustable. Spy inspiration. It complies with and is approved by European standar...
Category

The right vintage or designer hat can transform a look. This humble accessory is your reliable pièce de résistance, boosting confidence and lending an air of sophistication to any ensemble.

Functional and a widely renowned, versatile finishing touch when heading out for a night on the town, hats have long been a part of the history of fashion. Wealthy Egyptians, for example, wore hats to keep them cool in the blazing sun.

In the early 1800s, the wide-brimmed bonnets that women wore became increasingly elaborate. The brims broadened and many were embellished with colorful floral decorations. Legendary fashion designer Gabrielle “Coco” Chanel’s career began in millinery, a term that stems from Milan, Italy, as it was the city best known for producing quality hats during the 16th century. That was before she would set the fashion world alight with comfortable and practical jackets and skirts, encouraging women to leave extravagant clothes behind. Halston, who defined the spare, body-conscious style of the so-called Studio 54 era, was the hat designer for Bergdorf Goodman when he first moved to New York City. He had his first encounter with fame in 1961 when Jackie Kennedy wore a pillbox hat he designed.

From fascinators at a prestigious derby to a baseball cap for a walk in the park, there’s a hat for every occasion. When shopping for the right hat, you’ll want to pick one you feel confident in. Think about size too — you don’t want a wide-brimmed headpiece that will hog the spotlight on every occasion (or maybe you do). If you’ve got a petite face, an oversize hat might be too overbearing.

On 1stDibs find an expansive assortment of vintage and designer hats today. You can search for hats by style, designer or color.