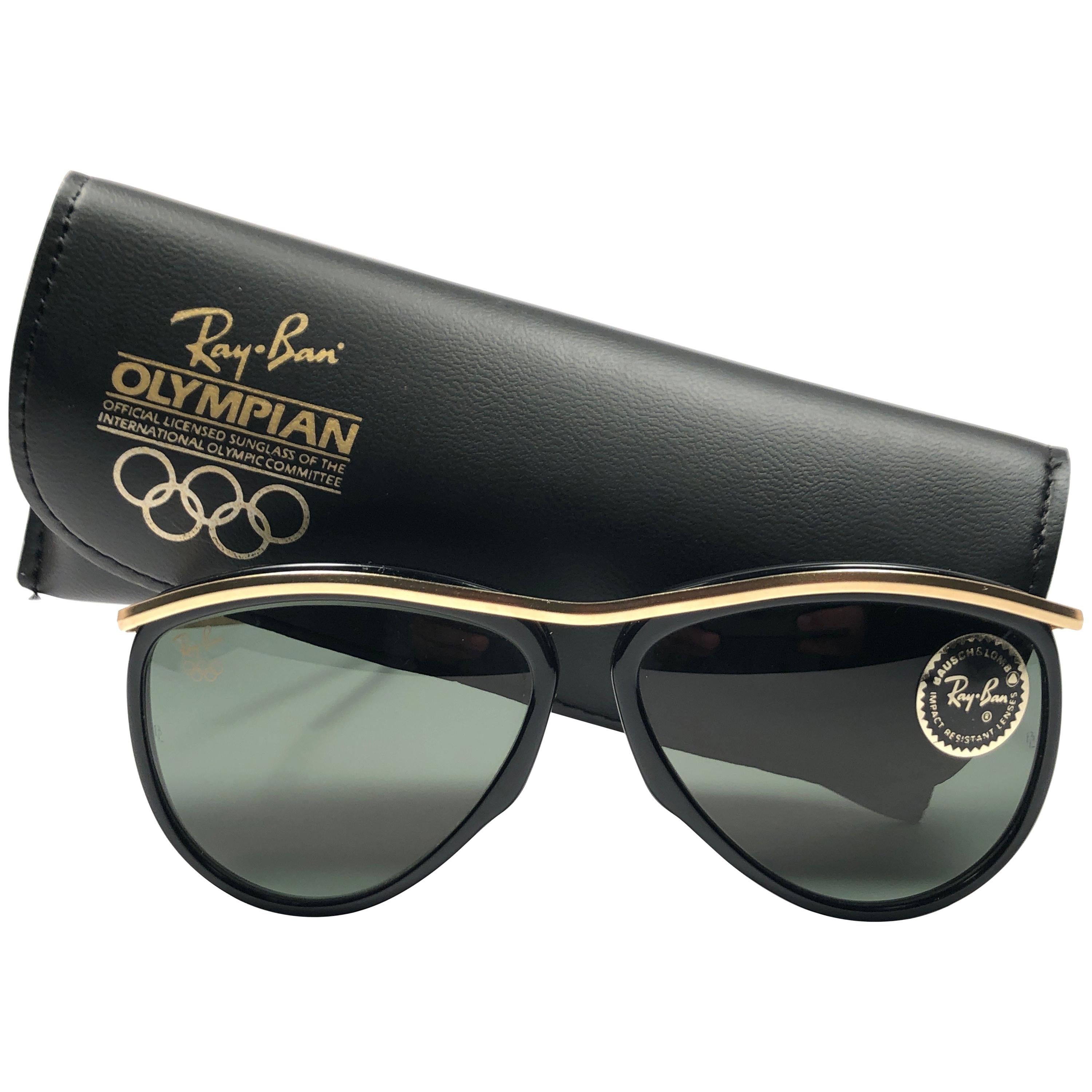 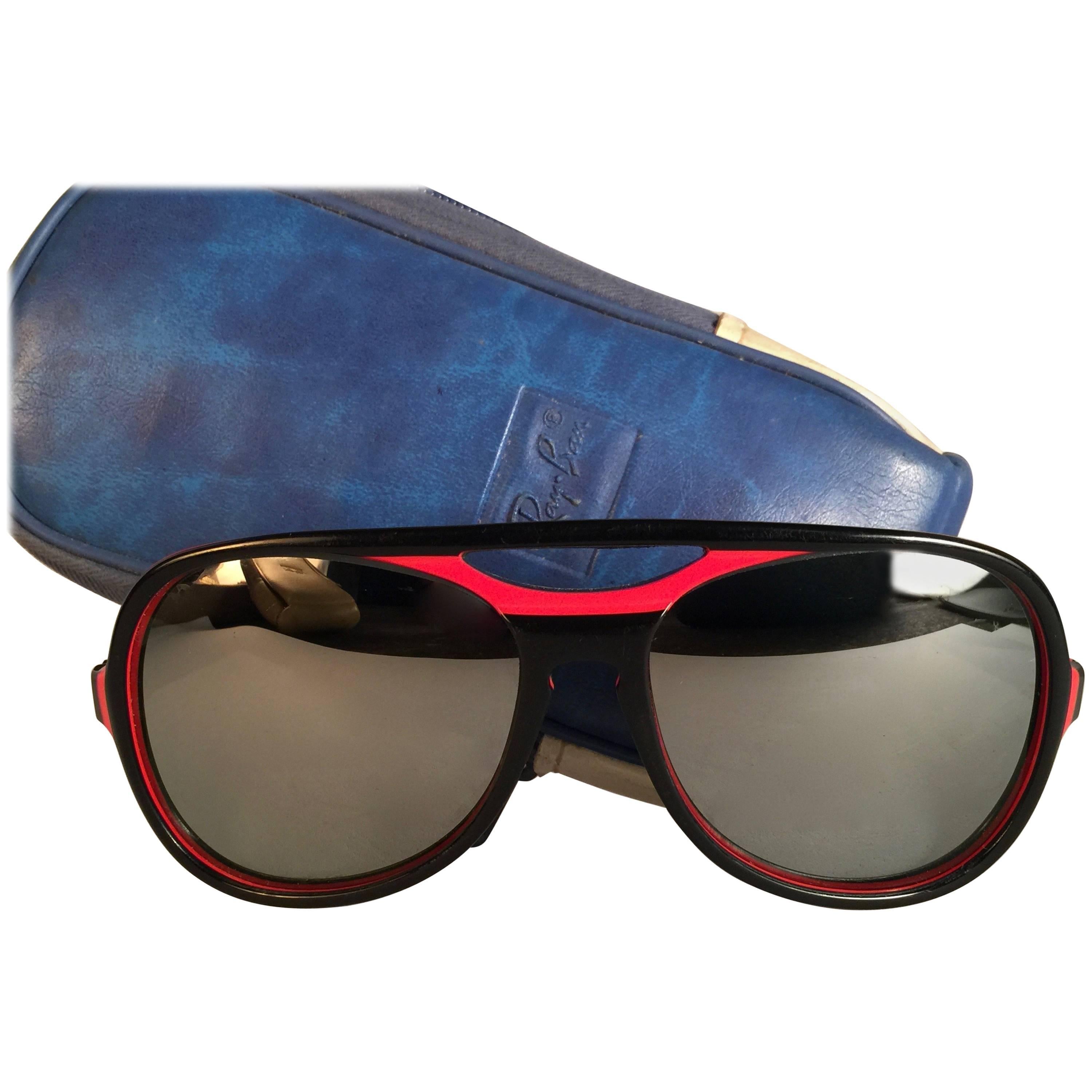 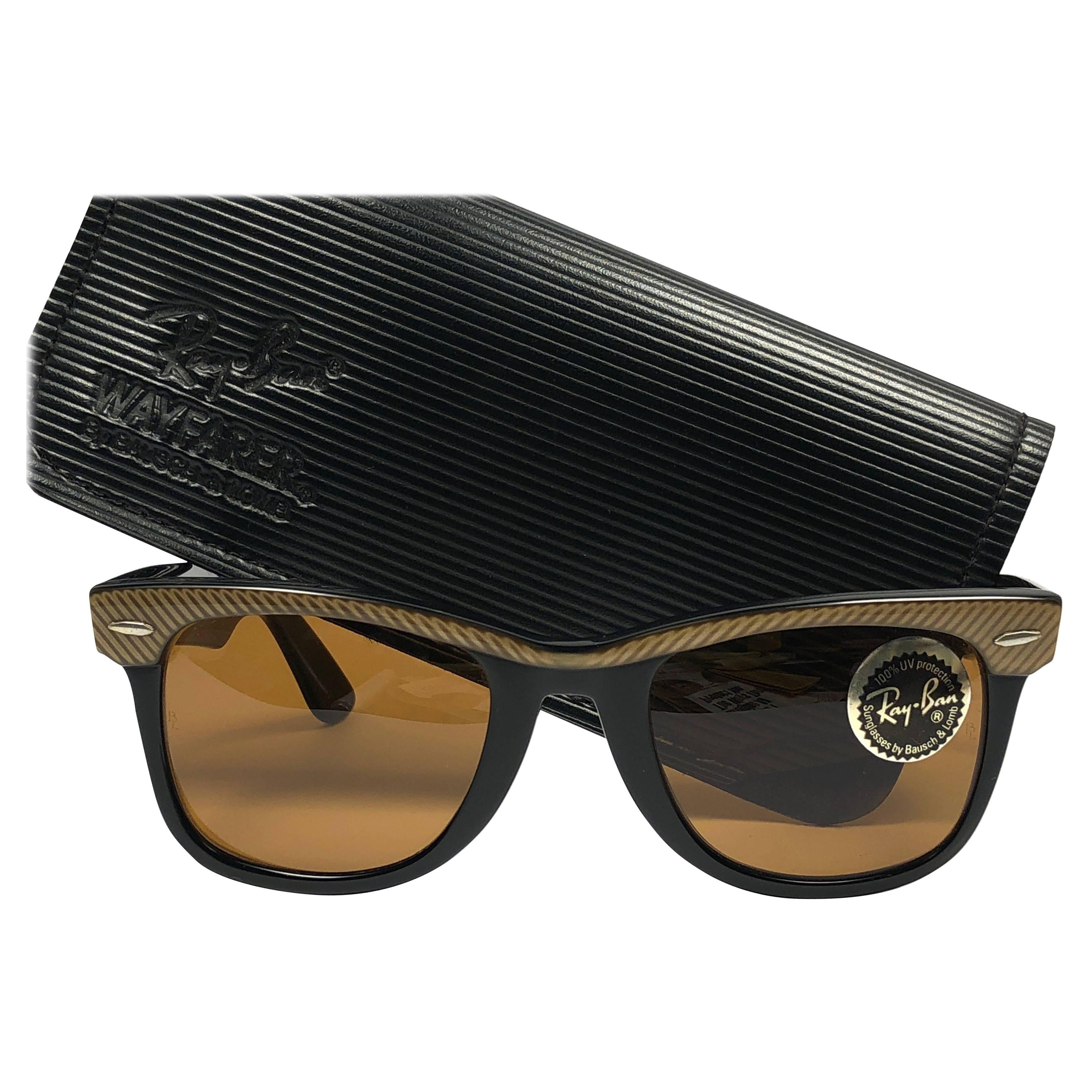 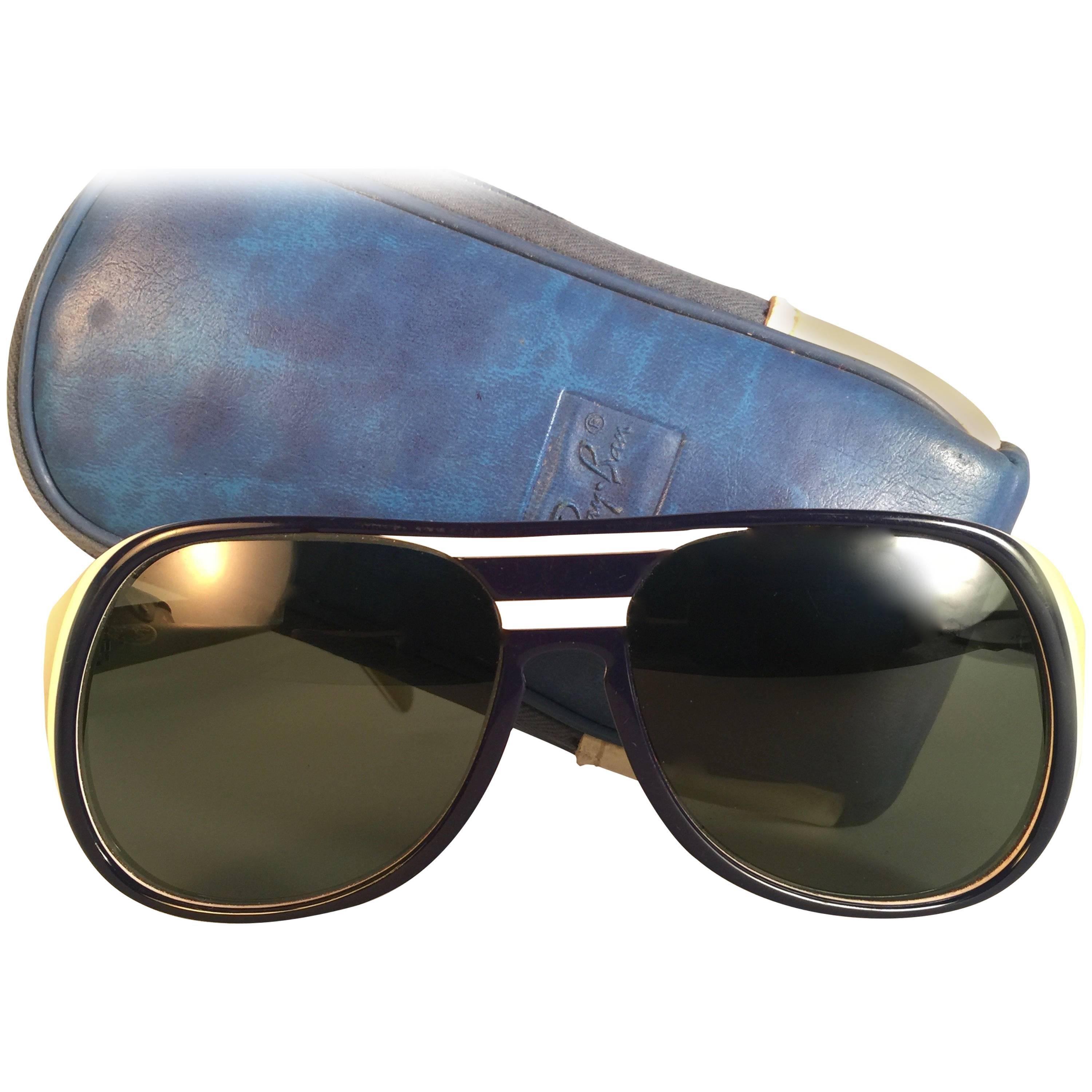 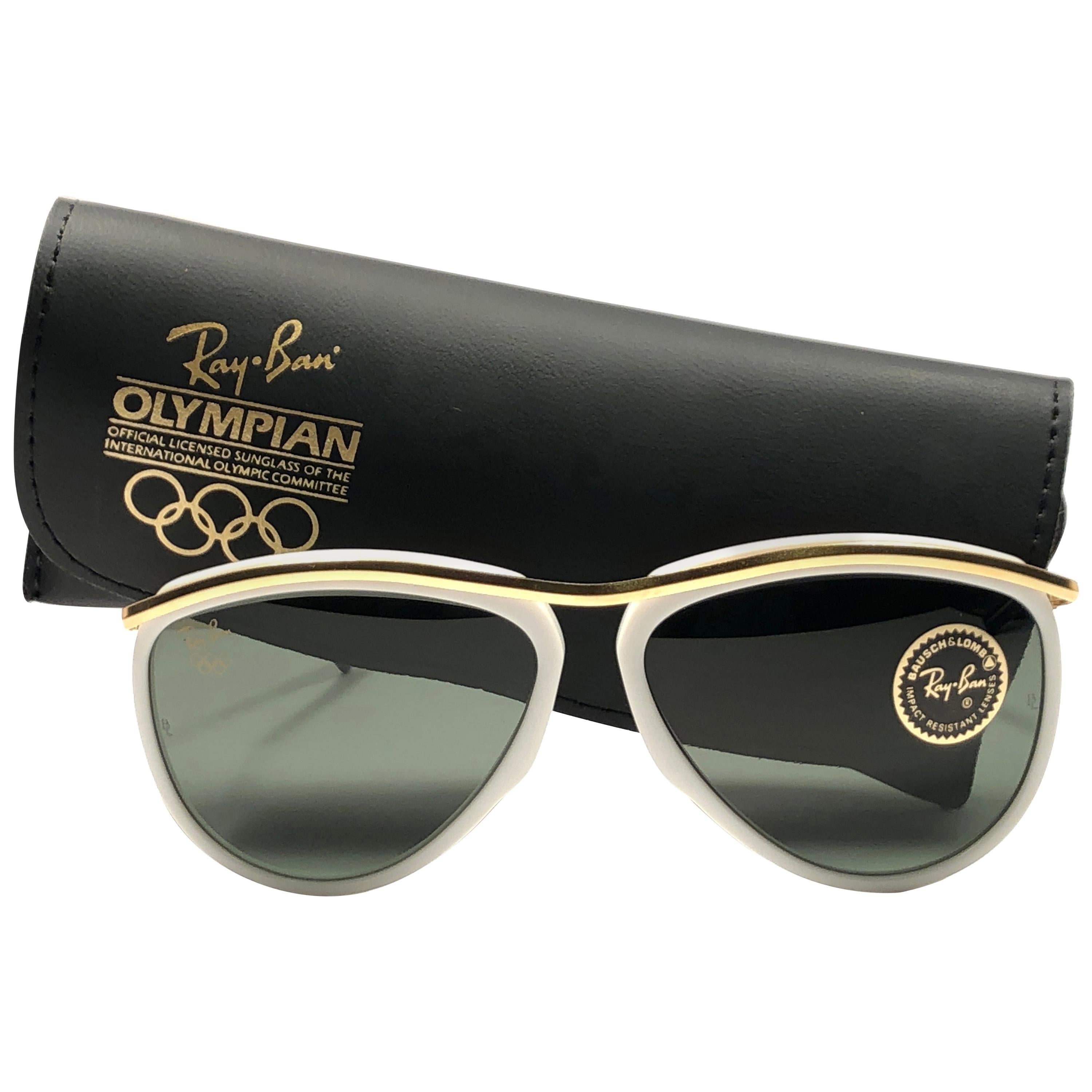 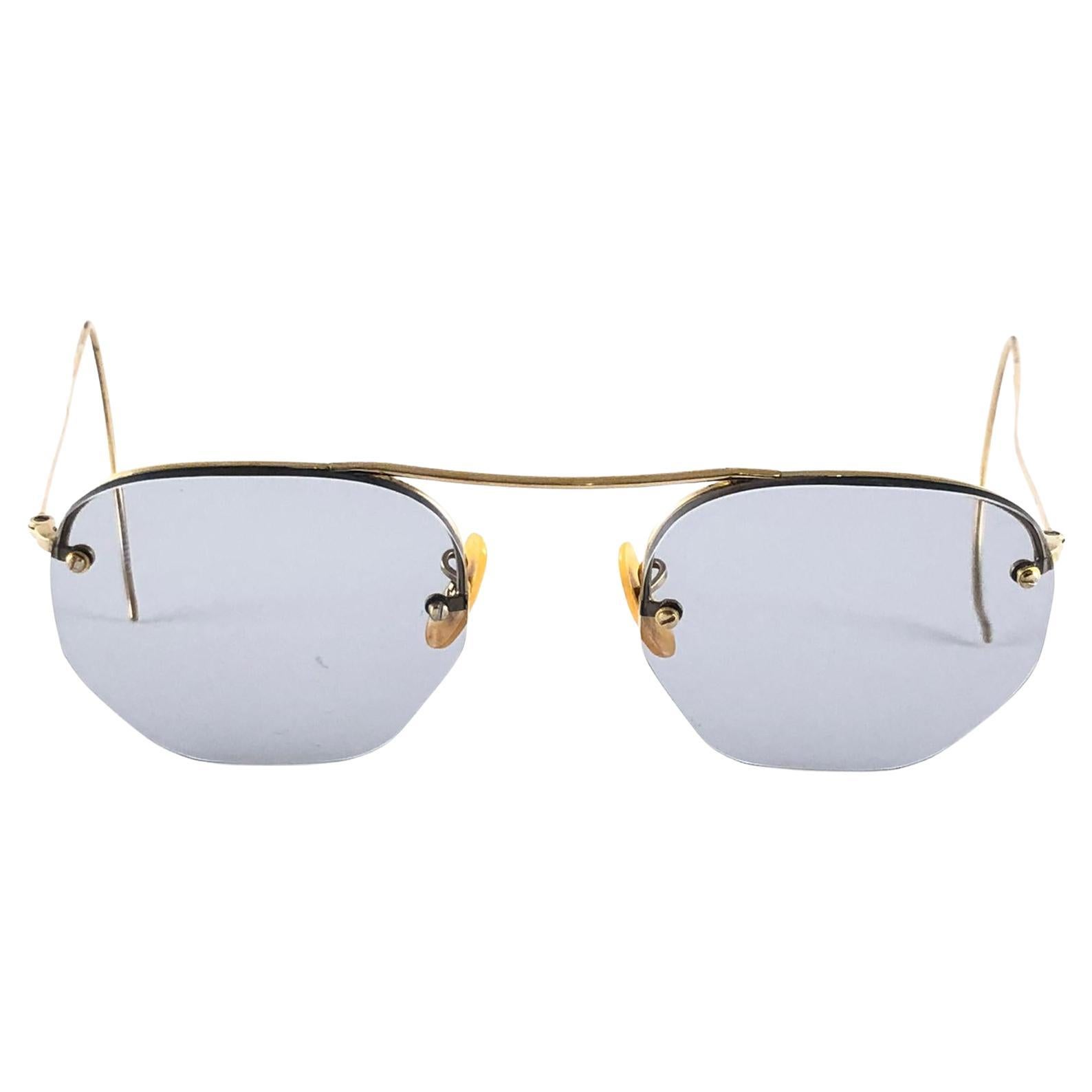 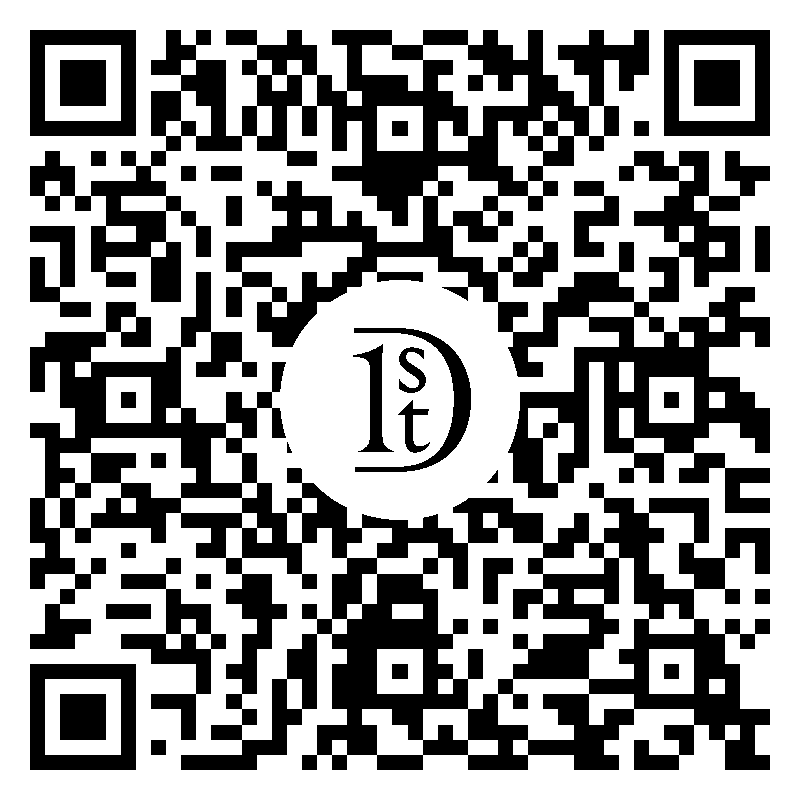 Mint Bewitching B&L etched in both G15 grey lenses. Please notice that this item is nearly 40 years old and show some storage wear. Made in USA. 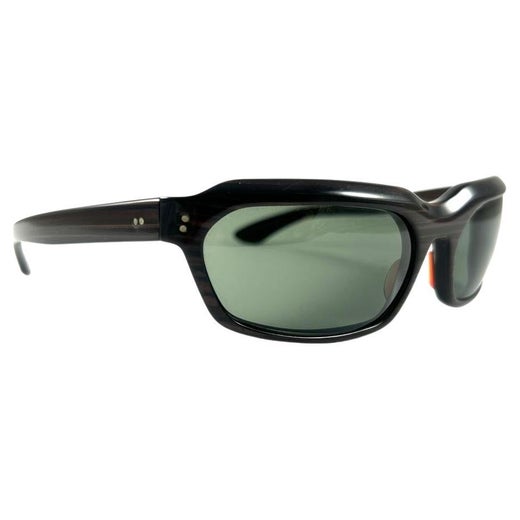 Vintage Ray-Ban sunglasses remain practically synonymous with American cool. And although the brand has given us some of America’s most iconic sunglass styles — the Wayfarer, the Clubmaster are widely loved Ray-Bans — the Ray-Ban Aviator is in a class of its own.

As a pilot in the U.S. Army Signal Corps, Lieutenant John Macready had experienced the debilitating headaches caused by the bright sun high up. In the 1930s, he took action, partnering with eyewear manufacturer Bausch & Lomb to develop sunglasses specifically for aviators like himself and his colleagues. It was patented as the Ray-Ban Aviator in 1939.

“Aviators reflect the idea that form follows power. They express charisma and heroism — a pilot takes us forward through danger, and there is no going back,” says Patrick Michael Hughes, fashion and decorative-arts historian at Parsons School of Design.

When the Wayfarer was released, in 1952, it was the first sunglass frame made from acetate. With a design inspired in part by mid-century Cadillac tail fins, it caught on with silver-screen stars. Early adopters included James Dean and Marilyn Monroe, who were soon followed by other artists, like Bob Dylan and Andy Warhol. Indeed, celebrities have long held sway in the sunglasses realm — whether you’ve opted for vintage Ray-Ban sunglasses because you’re enamored with Marilyn Monroe’s celebrated Wayfarers or you’ve taken to classic Aviators because actor Jon Hamm wore them in the nostalgic TV smash hit Mad Men.

Of course, with all of this star power, that means they’ve become as popular with counterfeiters as they are with consumers. Do you know how to spot fake Ray-Ban sunglasses?

The center portion of a pair of Ray-Ban acetate sunglasses — which holds the lenses — is cut from a single block. If you feel a seam where two pieces of plastic, front and back, have been glued together, just say no. Also, look out for glue and uneven edges. These are telltale signs of counterfeit production. The final product should have a sturdy, substantial hand.

The lettering inside the temples, or arms, is another good indicator of authenticity. The text should be cleanly etched, perfectly centered and aligned. Ray-Ban’s faux-leather cases come in black, brown and occasional special-edition colors. What you won’t find on a real case is frayed or uneven stitching. What you will find, on newer cases, is a snap closure inscribed with a perfectly centered and executed signature logo and, at the left, a larger logo stamped on the case, sometimes in matte gold or black.

A pair of classic designer sunglasses can be a game-changing finishing touch to your ensemble. Find your perfect pair of vintage Ray-Ban sunglasses on 1stDibs.

1stDibs Buyer Protection Guaranteed
If your item arrives not as described, we’ll work with you and the seller to make it right. Learn More
About the Seller
5.0
Located in Amsterdam, Netherlands
Recognized Seller
These prestigious sellers are industry leaders and represent the highest echelon for item quality and design.
Platinum Seller
These expertly vetted sellers are 1stDibs' most experienced sellers and are rated highest by our customers.
Established in 2006
1stDibs seller since 2017
671 sales on 1stDibs
Typical response time: <1 hour
More From This SellerView All
People Also Browsed
You May Also Like