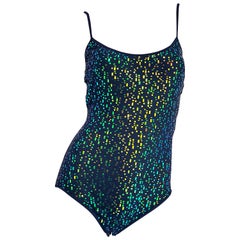 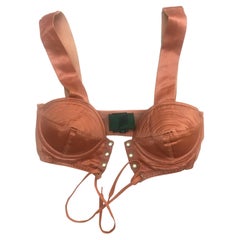 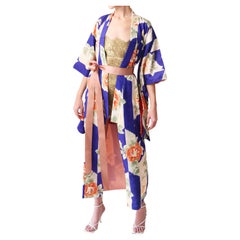 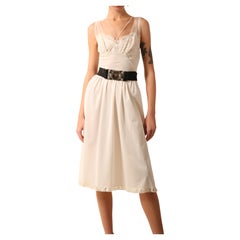 Peach Charmeuse and Illusion Lace Bed Jacket with Flutter Sleeves – S-M, 1930s
Located in Tucson, AZ
Whether worn as lingerie or an unconventional bolero, this delicate charmeuse jacket will earn its keep thanks to peek-a-boo intarsia lace at the bodice and dainty triple buttons at ...
Category

Djellaba dress by Emilio Pucci in printed silk chiffon Circa 2000

Silk ivory combinaison with cutwork and silk thread embroideries Circa 1930

Chanel 2004 Pastel CC Logo Embroidered Camisole
By Chanel
Located in Scottsdale, AZ
The most adorable and dainty top from the great house of Chanel. This was expertly designed with great care by Karl Lagerfeld for Chanel 2004 spring collection. The details of this t...
Category

As the most intimate layer of clothing, lingerie has evolved over time from an object of modesty to one of sensuality. Some vintage and designer lingerie includes garments and accessories that are hard, such as corsets and structured bras, while other items are soft to the touch, including nightgowns and slips.

In the 18th century, European women commonly wore whalebone corsets to create the look of an hourglass figure. Corsets were a standard part of women’s fashion into the 19th century. In 1914, Caresse Crosby filed a patent for the first modern bra, made by sewing two handkerchiefs together with ribbon ties. By the 1920s, the corset fell out of fashion in North America and Europe, and loose silhouettes and silky slips became mainstream.

As fashion returned to feminine forms in the 1930s, so did lingerie, with girdles and minimal bras. During World War II, bras were adapted to the rationing of materials like nylon and metal. In the postwar era, women had more lingerie choices than ever before, with inventions including the strapless bra.

In the 1950s, lingerie became more glamorous, matching the trends led by legendary French couturier Christian Dior and his “New Look,” a collection that introduced a new feminine silhouette of extravagant elegance upon its postwar debut. Just as the evolution of women’s swimwear over time reflected changing aesthetic taste as well as social upheaval, shifts in the design of lingerie owed to changing perspectives toward sex and style trends. Mid-century pinup models like Bettie Page transformed the undergarments market forever with a new desire for sexy lingerie. It would lead to the founding of Victoria’s Secret by Roy and Gaye Raymond in 1977.

In the late 1980s, performers like Madonna and Selena wore bustiers as outerwear, a trend that continued through the 1990s and early 2000s. With the broadcasting of the Victoria's Secret fashion show beginning in 1995, everyday style also changed. Lingerie was no longer expected to be hidden away.

On 1stDibs, find a range of alluring vintage and designer lingerie, including black bodysuits, black bralettes, corsets and more by designers such as Vivienne Westwood, Azzedine Alaïa and Versace.