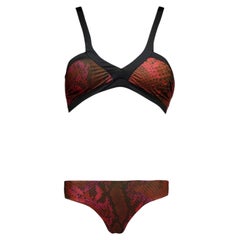 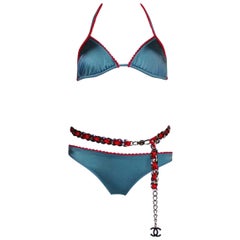 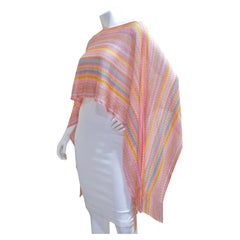 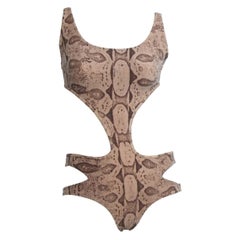 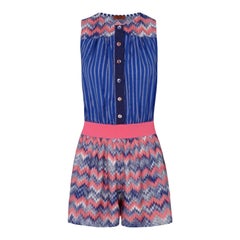 Dolce & Gabbana Multicolor Leopard Maiolica Swimsuit Bikini Swimwear Beachwear
By Dolce & Gabbana
Located in MARBELLA, ES
Stunning Dolce & Gabbana one-piece swimsuit which is draped on the sides is made from a precious fabric in the romantic leopard maiolica print and has an extraordinarily sophisticate...
Category

Dolce & Gabbana Black Floral two piece swimwear bikinis
By Dolce & Gabbana
Located in MARBELLA, ES
The unpadded triangle bikini top offers a sophisticated look thanks to the Black Floral print and is made of the precious “sensitive fabric”. The classic bikini bottoms have an extr...
Category

Peck & Peck Ochre Tiki Sarong-Tie Play Suit Swimsuit Beach Romper – M, 1960s
Located in Tucson, AZ
Mix a Mai Tai and get ready to do the “limbo,” because your beach party wardrobe is covered. A departure from the classic, WASP-y fashion for which the brand was known, this rare tik...
Category

Dolce & Gabbana Multicolor White Rose Swimsuit Swimwear Beachwear Bikini Flower
By Dolce & Gabbana
Located in MARBELLA, ES
Stunning Dolce & Gabbana one-piece swimsuit which is draped on the sides is made from a precious fabric in the romantic WHITE ROSE print and has an extraordinarily sophisticated look...
Category

From Esther Williams’s glamorous one-piece wonders to Brigitte Bardot’s bombshell bikini on the beaches of Cannes, swimwear has made headlines and raised eyebrows for years. After all, who doesn’t want to wear alluring vintage or designer swimwear for a trip to the beach or poolside relaxation?

Design, style and the amount of skin shown have all made news when it comes to swimwear. While in the 19th century women often sported skirts over bloomers when they visited the shore, by the early 20th century, many were wearing sleek Jantzen suits that would influence the swimsuits women wear today.

By the mid-century, cutouts and two-piece suits were pushing the boundaries of swimwear, with designer Rudi Gernreich debuting the daring topless monokini in 1964. In the 1970s, legendary designers such as Halston were applying an evening-wear aesthetic to swimwear, adding plunging necklines, ruching and even beadwork. Maillots and bikinis began to feature strapless designs.

Jean Paul Gaultier, Christian Dior, Balenciaga, Elsa Schiaparelli and Versace are among the designers who have left their mark in the swimwear world with bold prints and cuts as well as a wide range of dazzling embellishments.

Today, swimsuits are crafted with both function and style in mind for swimming, lounging and making a statement in and out of the water. Browse an extensive collection of vintage and designer swimwear on 1stDibs.