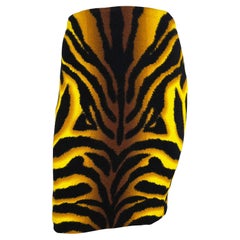 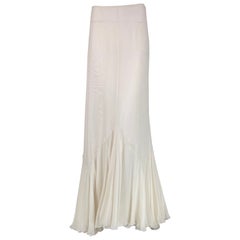 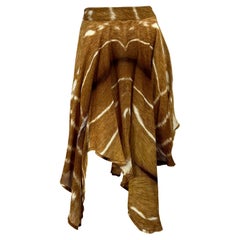 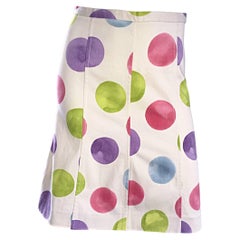 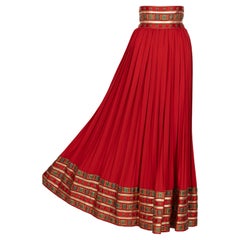 Etro Maxi Skirt Long Paisley Print Wool Silk Blend Italy Size 40
By Etro
Located in Port Saint Lucie, FL
Fabulous wool and silk blend paisley skirt by Etro, made in Italy. Made from a super soft wool and silk knit, it features a blue and violet paisley print with a 13in front vent. A s...
Category

Prada Split Panel Black Metallic Skirt circa late 90s
By Miuccia Prada, Prada
Located in Berlin, DE
Prada skirt with slits in black metallic fuzzy like material. It consists of 6 panels that are split up very calculated pattern to be fit well on body. It has zipper closure. Size :...
Category

Emilio Pucci Velvet A Line Skirt 1970s
By Emilio Pucci
Located in West Palm Beach, FL
Emilio Pucci velvet A line skirt from the 1970s. Black velvet skirt is printed with fantasy flowers in taupe, white, pink & fuchsia, there is a border hem. Side pockets, the skirt is...
Category

Vintage Bill Blass Beaded Black Long Sheer Evening Skirt W Sequins & Beads
By Bill Blass
Located in Portland, OR
This stunning vintage Bill Blass sheer black silk skirt is beautifully beaded and has sequins throughout. The sequins are a silver and gold mix and the beads are black. The skirt has...
Category

Dolce & Gabbana Striped Stretch Cotton Portofino Skirt
By Dolce & Gabbana
Located in Geneva, CH
This pre-owned Portofino long skirt from Dolce and Gabbana is crafted in a stretch embroidered cotton. It features an elastic waistband, a concealed back zip closure, some decorative...
Category

For everyday casual wear, elevating your look at the office or making a dramatic entrance at a formal event, authentic designer and vintage skirts are reliably versatile garments.

Skirts have been around for thousands of years. A woman’s straw skirt found in an Armenian cave is believed to have been handwoven in 3,900 B.C., and long, full skirts were worn by men and women in Ancient Egypt and Ancient Mesopotamia. Over time, the hemlines might have changed significantly but the skirt’s integral role in fashion has remained in place.

By the early 1900s, skirt hemlines had crept up slightly to ankle-length height from the densely layered floor-length style that dominated the Victorian era — a radical shift. As women in the United States began to live more active lives during the 1920s, designers such as Gabrielle “Coco” Chanel sought to free them from the long skirts and other constrictions that persevered in fashion by ​​introducing her first little black dress. That same decade, she debuted her perfume, Chanel No. 5, as well as the Chanel suit with a fitted skirt, inspired by the boxy lines of men’s clothing and employing a sporty tweed.

Advancements in swimwear during the 1920s and 1930s also reflected a climbing hemline. Visionary designers such as Elsa Schiaparelli eventually pushed the boundaries of modesty with her backless suit, but women still wore long garments in public. Also during the so-called Roaring ’20s, short flapper dresses that fell at the knees and boasted a free-flowing sack-like silhouette, as well as chic beaded evening gowns and floral day dresses, paired fabulously with the dazzling jewelry of the era. This proved to be just a fleeting deviation from prevailing social convention, however. Skirts grew longer again in the 1930s, even if bows and other embellishments were added. As women entered the workforce in large numbers, clean lines accentuated curves and flared slightly where the material resolved at the ankles.

After World War II, France earned recognition as the center of fashion design for women. It was the golden age of haute couture, and women, quick to dispense of the drab utilitarian wartime garb that hung in their closets, pined for luxurious, elegant skirts designed by Christian Dior, Chanel, Givenchy and others, which were splashed across the pages of Vogue and Harper’s Bazaar in richly colored photographs shot by the likes of Richard Avedon and David Bailey. The 1960s introduced narrow pencil skirts and provocative minis emblazoned with geometrically dazzling patterns or bright floral prints by designers such as Emilio Pucci, Pierre Cardin and Lilly Pulitzer. By the 1970s, women felt emboldened to wear different varieties of this all-purpose garment, exploring wraps, crushed velvet maxis and other styles crafted by Halston, ​​André Courrèges, Yves Saint Laurent and others.

On 1stDibs, find a wide range of designer and vintage skirts for any gender by Prada, Dolce & Gabbana, Alexander McQueen and more. Whether it’s a skirt that can be altered to suit a specific style or an addition that’s ready to join your cherished collection, find exactly what you’re looking for today.