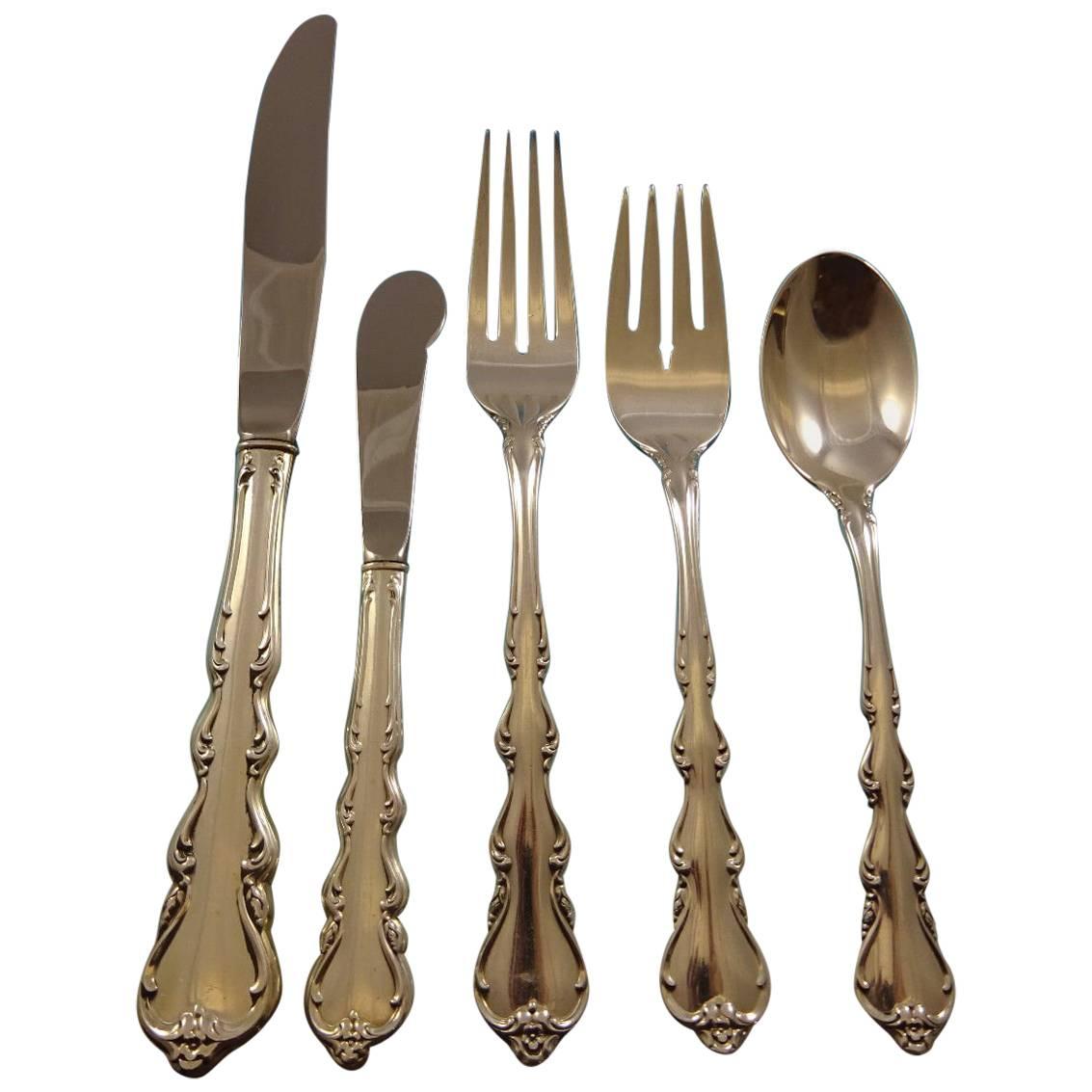 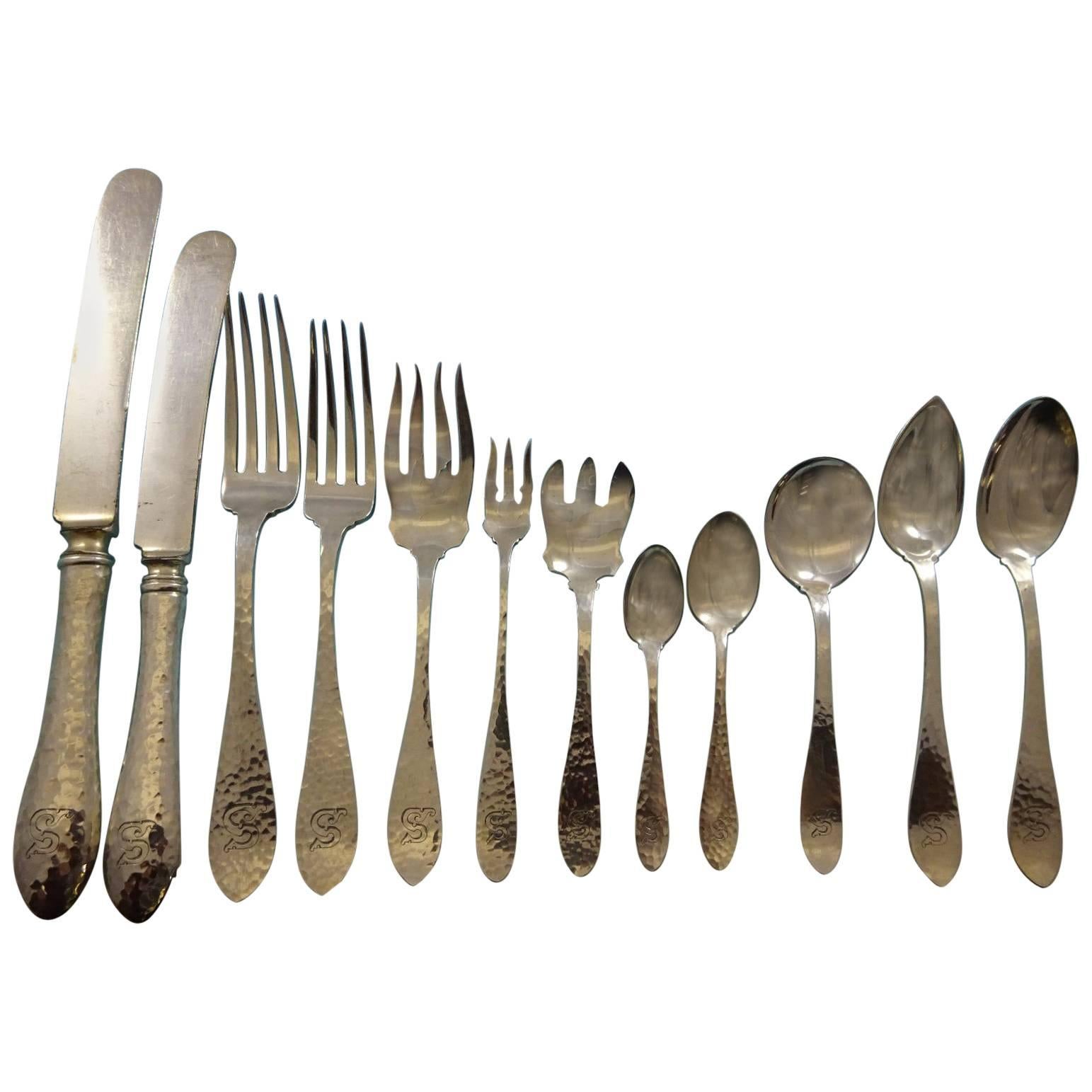 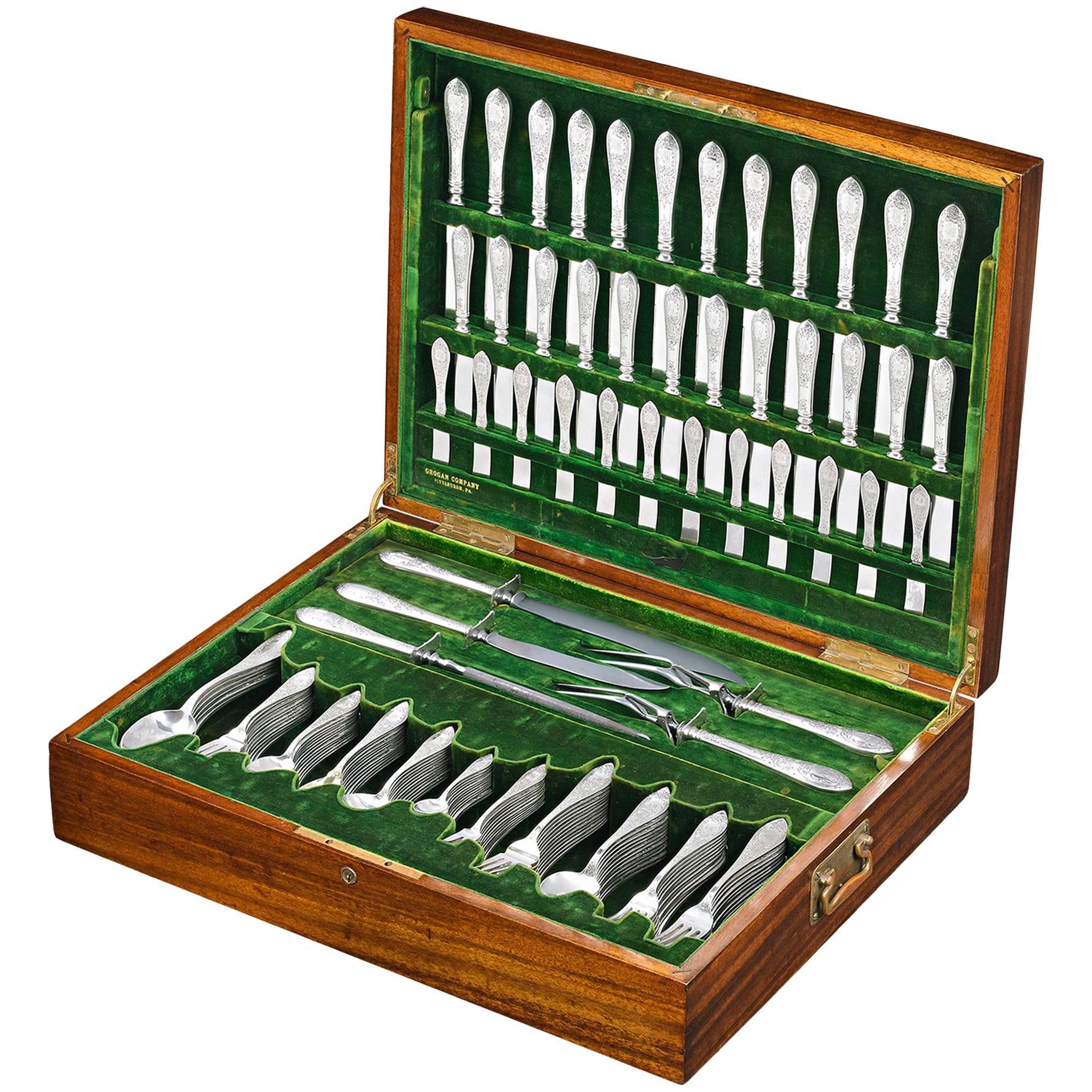 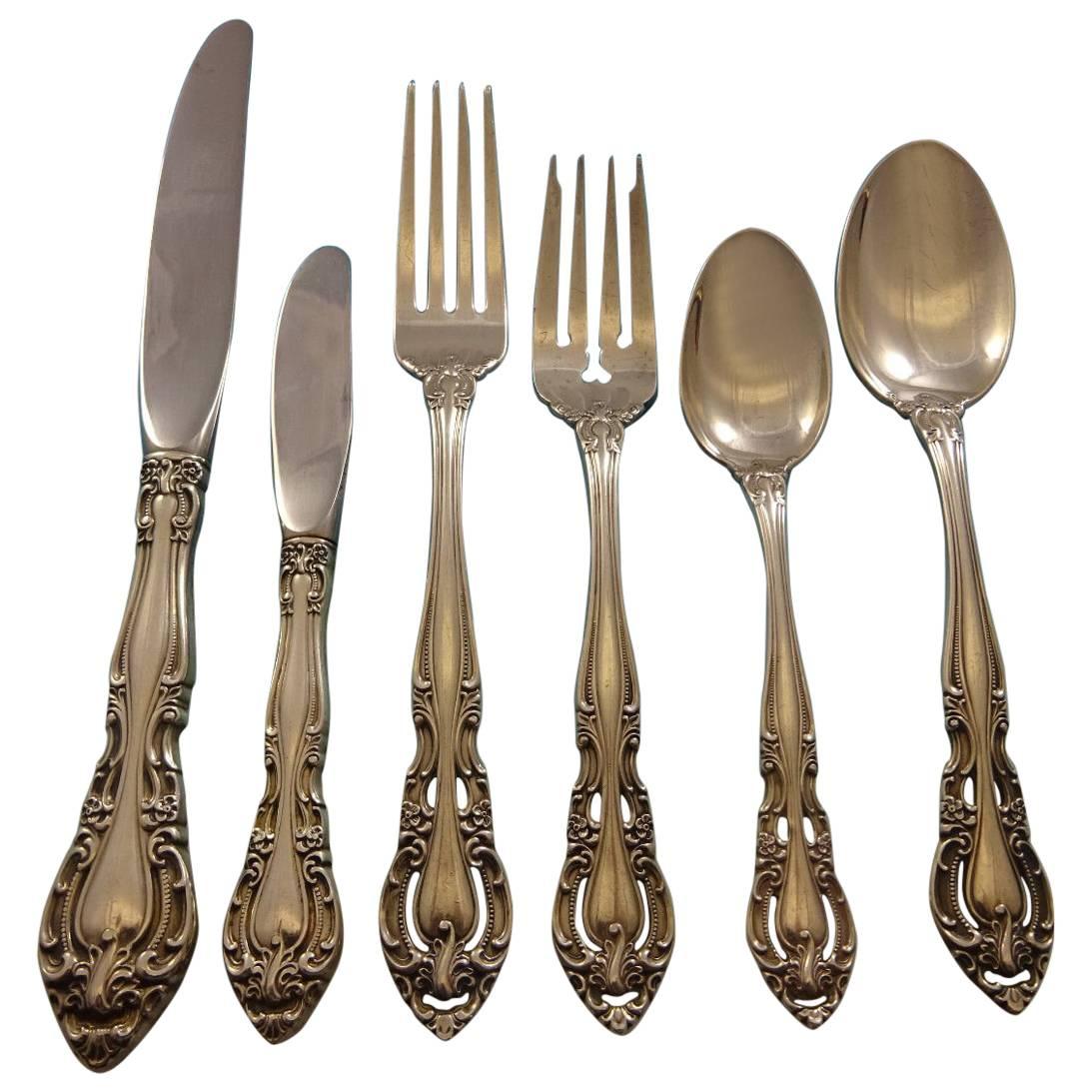 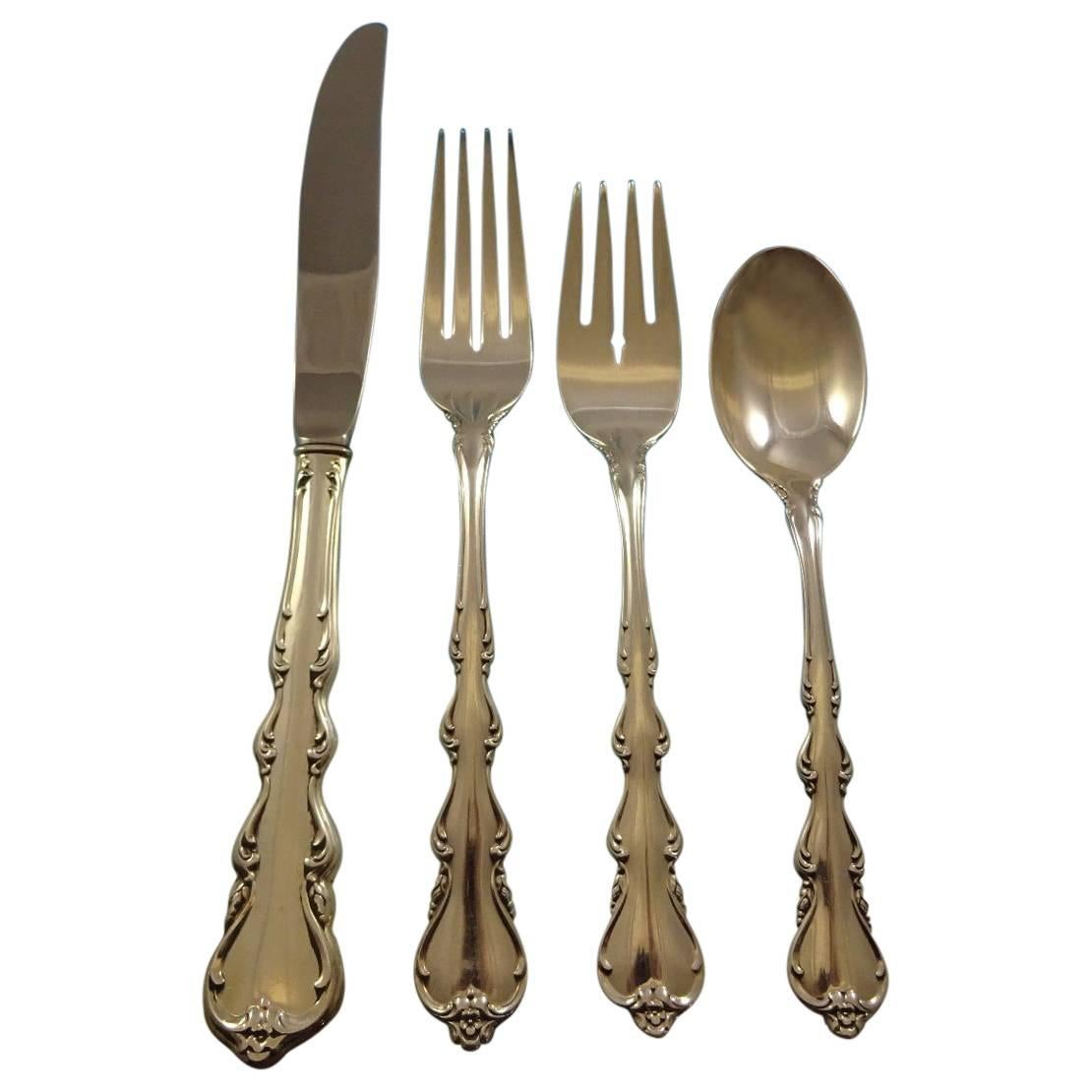 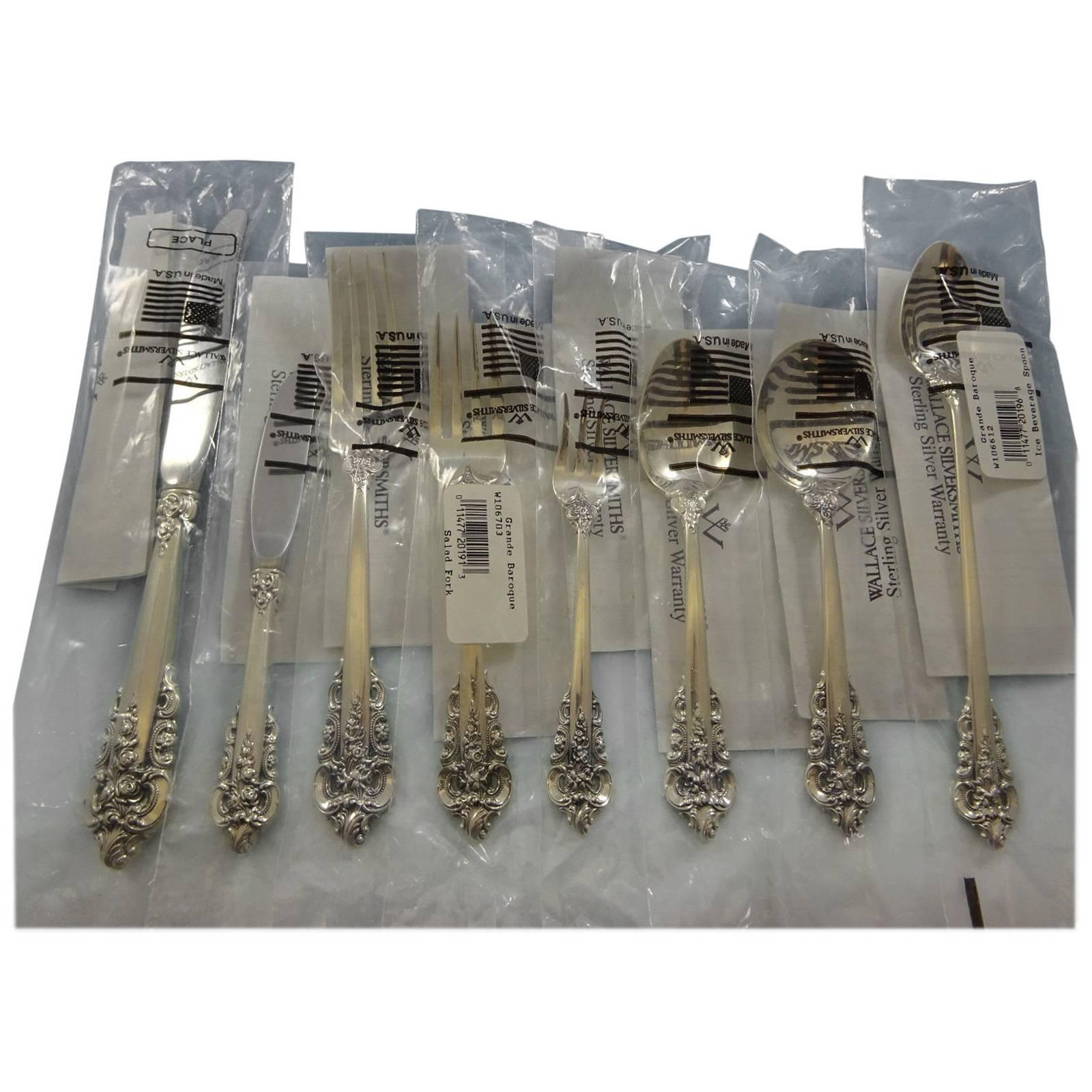 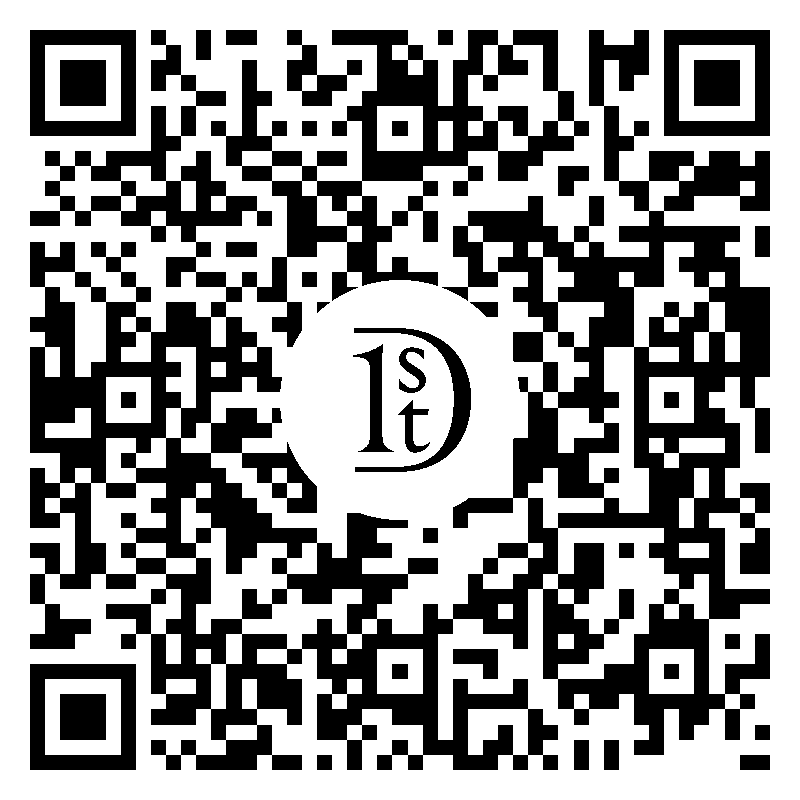 Fabergé silver is regarded as the highest form of Continental silver in terms of artistry and opulence. This rare 197-piece parcel-gilt silver flatware service for 24 was produced by the firm’s legendary workshop in Moscow, a city that was long considered the epicenter of Russian silver and goldsmithing. This service boasts an elegant neoclassical motif with a beaded border and gold gilt accents, displaying an understated opulence that makes it one of the finest sets of silver ever created by Fabergé’s master artisans. This set is housed in its custom-fitted oak chest. Each utensil is stamped “K. Fabergé” in Cyrillic with the Imperial warrant and marked 84 zolotniks. Hallmarked Moscow, 1899-1908 Measures: 13 1/4" high x 25 1/4" wide x 17 7/8" deep Fabergé silver was produced in the Moscow and St. Petersburg workshops, with the most spectacular designs created specifically for the Czar. A substantial amount of the firm’s works, including court and presentation pieces, were melted down to mint silver ingots and rubles during the political unrest that plagued Russia during the Revolution. What remains today are primarily objects of function that found their way to the West, making a complete flatware service a truly precious find. Surviving pieces of Fabergé silver are increasingly scarce, found only in the most elite museum and private collections. The few examples in existence today represent the epitome of the Russian decorative arts. This set comprises: 24 dinner forks 24 dinner knives 24 dinner spoons 12 fish forks 12 fish knives 12 dessert forks 12 dessert knives 12 dessert spoons 12 silt fruit knives 12 teaspoons 12 coffee spoons 6 salts with salt spoons a sardine server a fish fork a fish knife a sugar sifter 2 gravy ladles asparagus tongs a soup ladle a cheese server a jelly server a flat server 2 large serving spoons 2 serving forks 2-piece salad server. 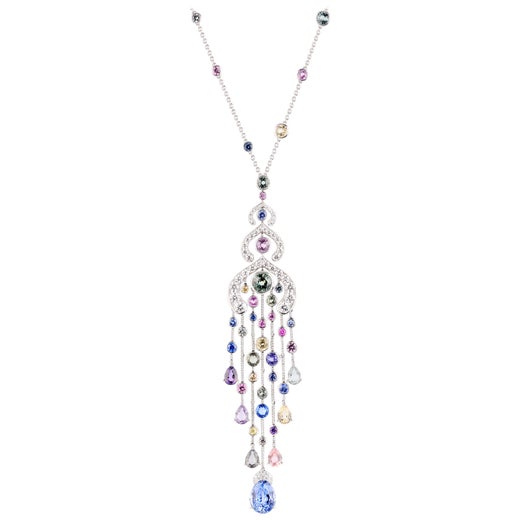 Best known for creating the lavishly ornate and intricately devised Imperial Easter Eggs given by the last czars to their families as annual holiday gifts, the House of Fabergé was the most prestigious Russian luxury goods maker of the late 19th and early 20th centuries. Serving the aristocracy and the well-to-do through stores in St. Petersburg, Moscow and as far afield as London, Fabergé crafted a wide range of jewelry, clock cases, silver and myriad objets de vertu that included picture frames, cigarette boxes, cufflinks and carved hardstone floral and animal figurines. Following the revolution, the firm was closed by the Soviet state in 1918. Master goldsmith Gustav Fabergé, a descendant of Huguenot emigrées, founded the company in St. Petersburg in 1842. The firm did a brisk trade among the lesser nobility and the merchant class, but it flourished under the guidance of Gustav’s eldest son Carl Fabergé, who took over in 1872. Cosmopolitan, widely-traveled and himself a master goldsmith, the younger Fabergé drew early design inspiration when he volunteered to catalogue and restore pieces in the imperial jewelry collection in the Hermitage. Fabergé pieces based on historical jewelry from the Hermitage caught the attention of Czar Alexander III at a Moscow exhibition in 1882, and three years later he commissioned the first Imperial Easter Egg as a gift for the czarina. (Relatively simple in design compared to the complex cloisonné-adorned eggs that followed, the first egg was a white-enameled ovoid containing a gold “yolk” that held a gold hen, which in turn contained a replica of the imperial crown from which hung an egg-shaped ruby pendant.) Czar Nicholas II continued the tradition, presenting two eggs each Easter — one for his wife and one for his mother. As the appointed goldsmith to the royal court, the House of Fabergé became the darling of Russian aristocrats as well as wealthy patrons across Europe. Many and varied objets — hundreds of thousands by one count — were made to meet their demand. The firm employed some 500 craftsmen and designers when it was shuttered. After the Russian Revolution, the Fabergé name and trademark endured a checkered passage through the 20th century. Family members left their homeland in 1918 and set up a new business in Paris that was mainly concerned with repairing and restoring earlier-made wares. The name was adopted by an American fragrance and beauty products maker in the late 1930s, and later authorized by the family in a 1951 agreement. The trademark has been subsequently sold several times, and attached to numerous products including jewelry. For connoisseurs, true Fabergé refers to items made in the firm’s brief, golden decades from 1885 to 1917. Collectors are advised to make a study of Fabergé works in museum collections such as the Victoria & Albert and the Royal Collection in London to gain an understanding of the quality of genuine goods made by the original firm, and then to purchase only from reputable and reliable dealers, such those at 1stdibs. As you will see from the jewelry and objects on these pages, Fabergé pieces are richly redolent of a romantic past, and a source of thorough delight. 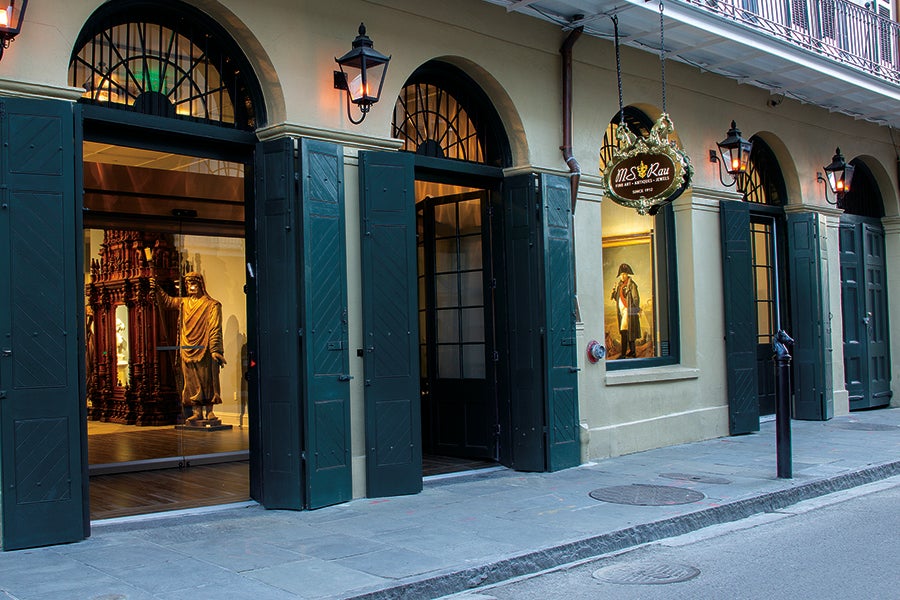 About the Seller
5 / 5
Located in New Orleans, LA
Recognized Seller
These prestigious sellers are industry leaders and represent the highest echelon for item quality and design.
Established in 1912
1stDibs seller since 2010
64 sales on 1stDibs
Typical response time: 12 hours
More From This Seller

$221 Sale Price / set
25% Off
Sterling Flatware '5 Piece Setting Service for 24'
By Wallace Silversmiths
Located in Brooklyn, NY
This set of sterling silver flatware has 120 pieces, that’s service for 24 / 5 piece settings. Tailored and understated, the pattern is Classic. This set goes with any decor, and any...
Category

$8,200 / set
Geometric Cutlery Silver Service Set x 2
By Natalia Criado
Located in Milan, IT
Geometric cutlery service composes by 6 unique pieces, fork, spoon and knife made of silver brass Dipping into geometry and ornamental symbolism, the effect is fun and its simplicit...
Category

A Grand Complication from the golden era of pocket watches, the Marius Lecoultre pocket watch does everything but uncork your wine.