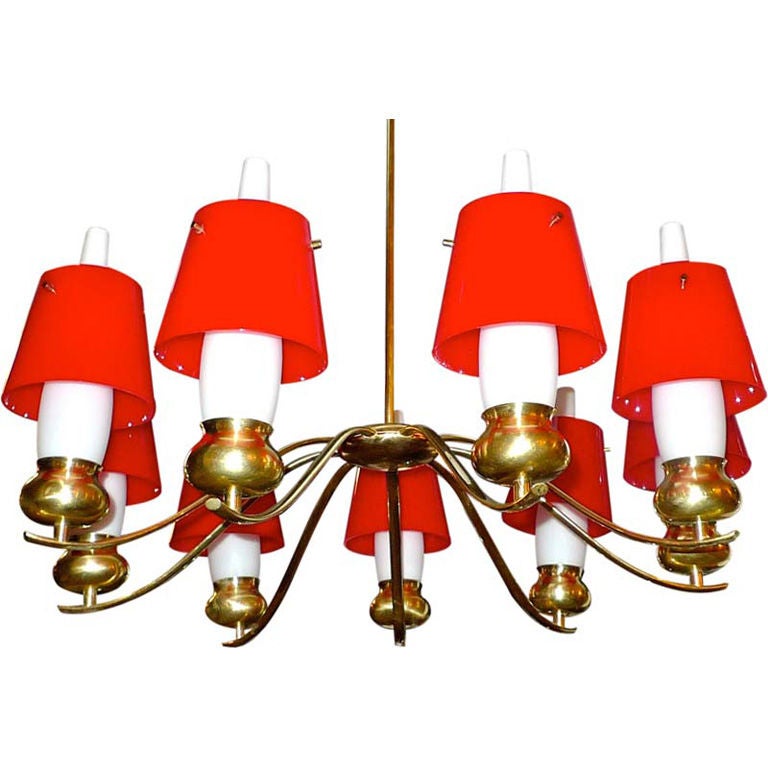 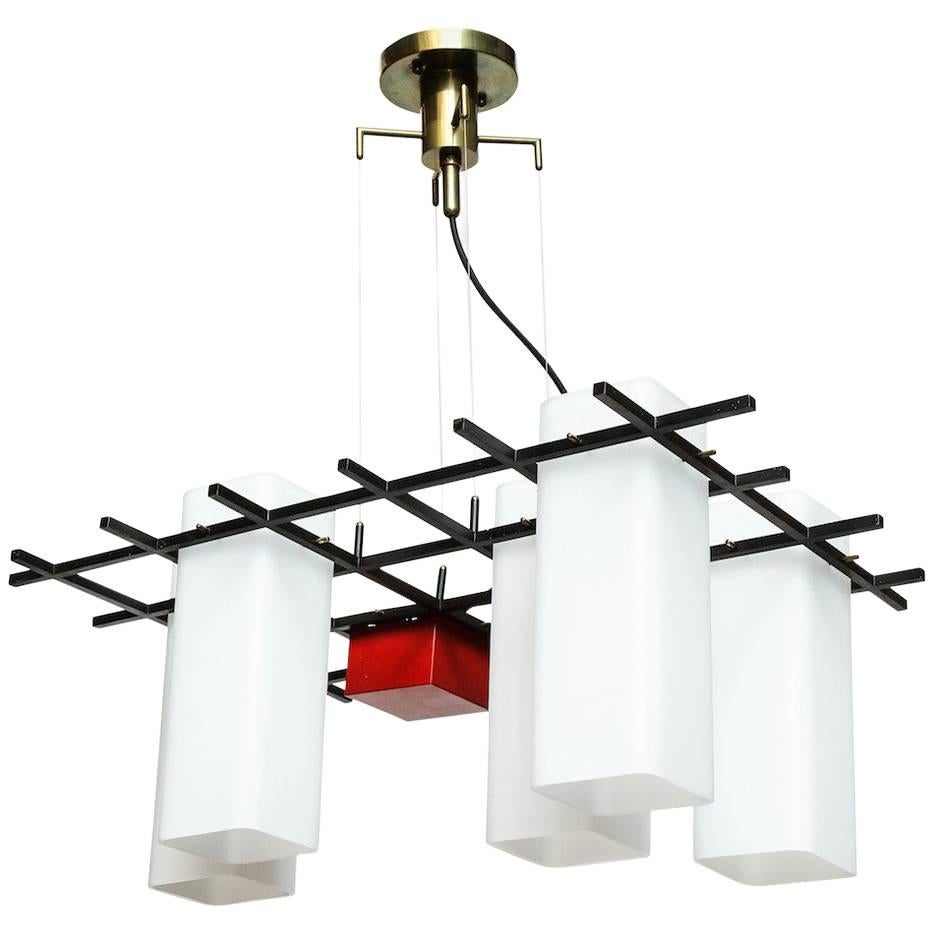 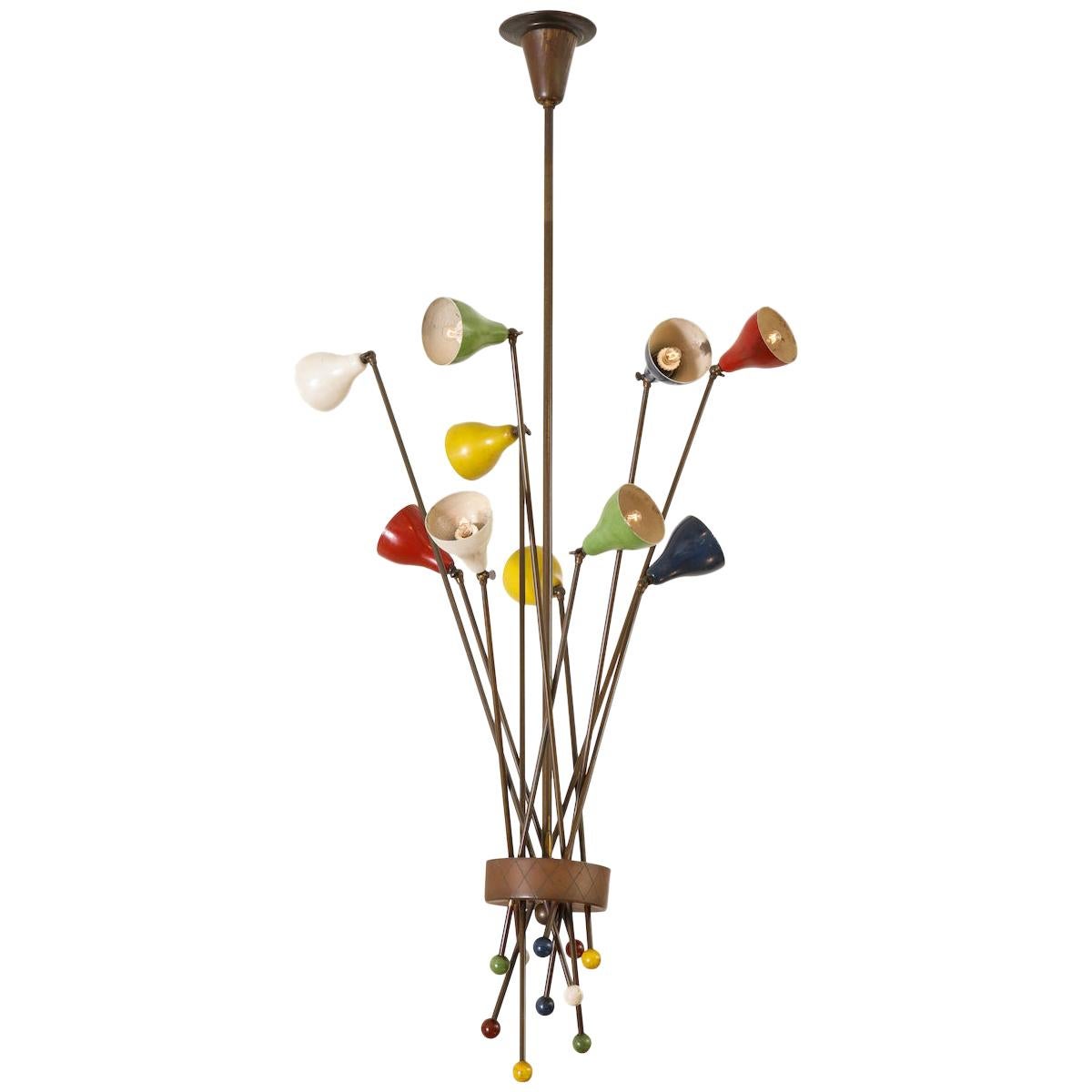 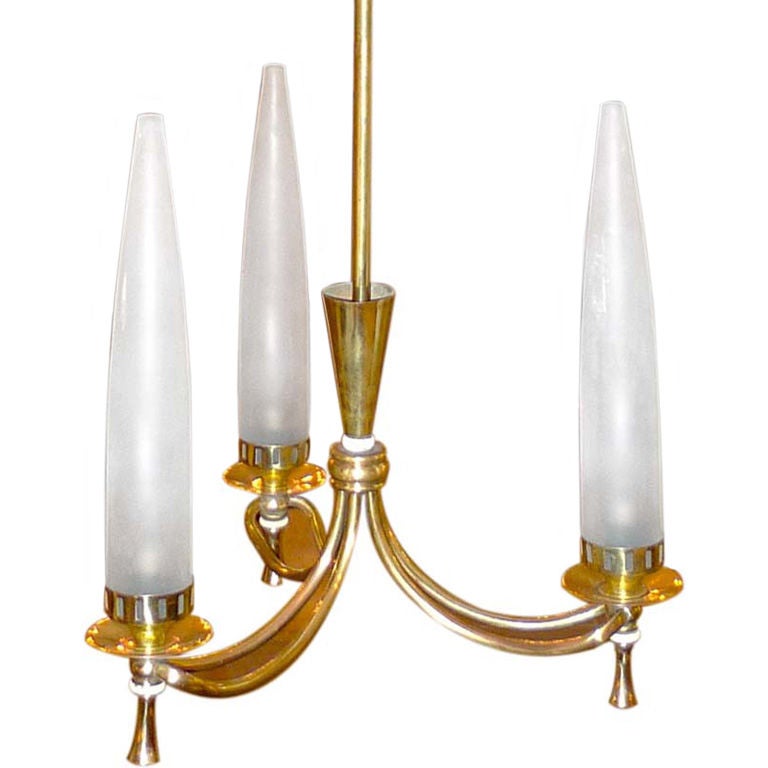 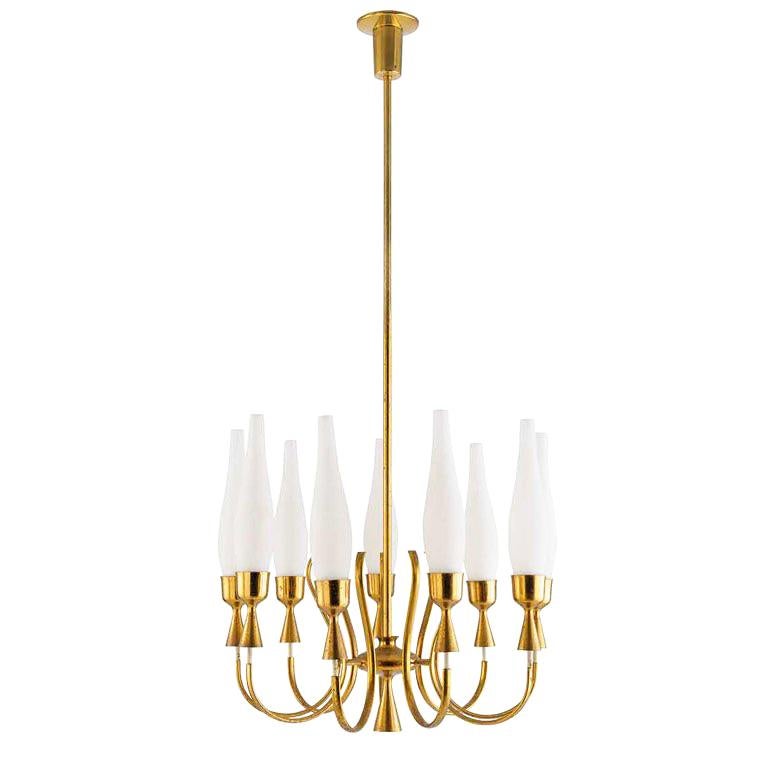 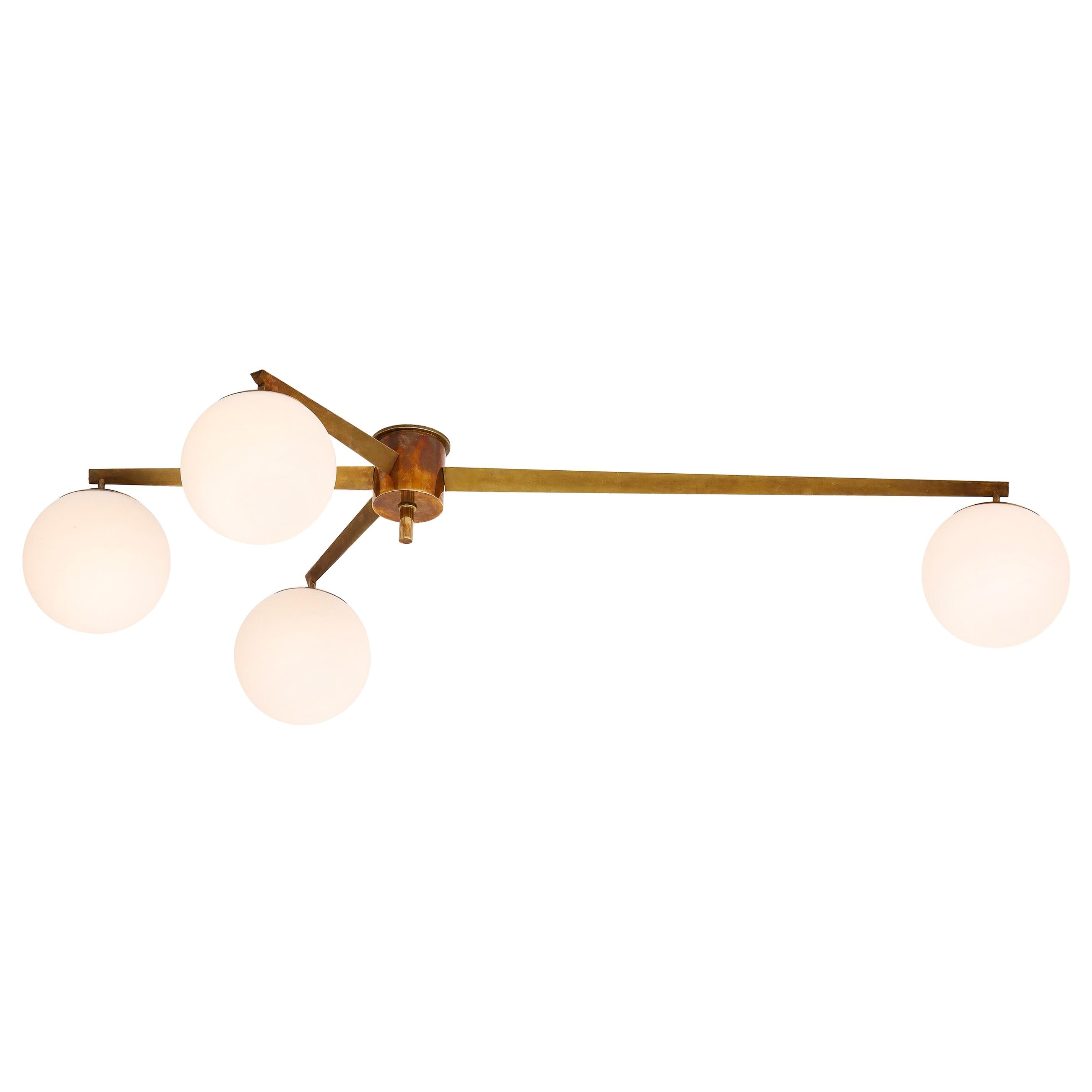 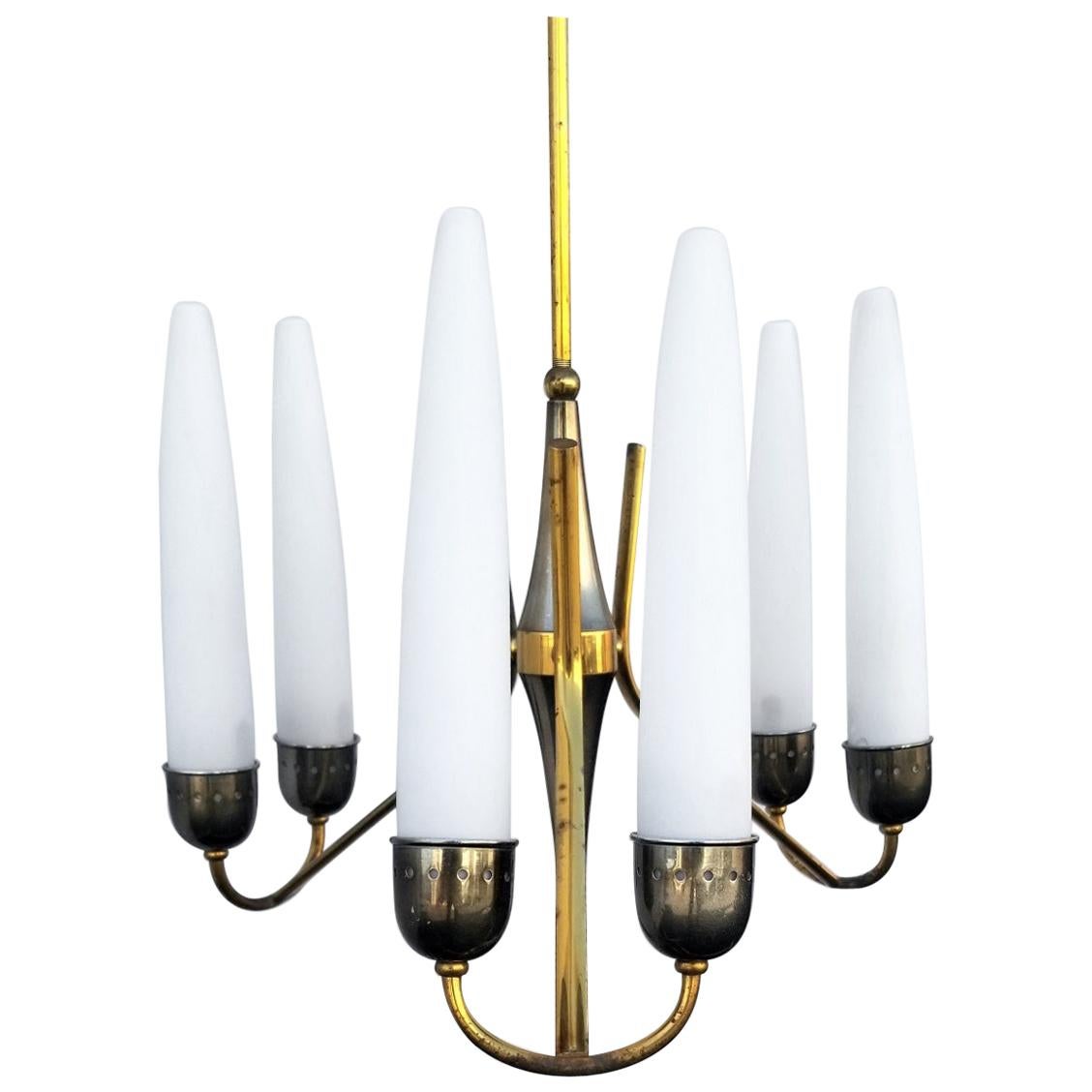 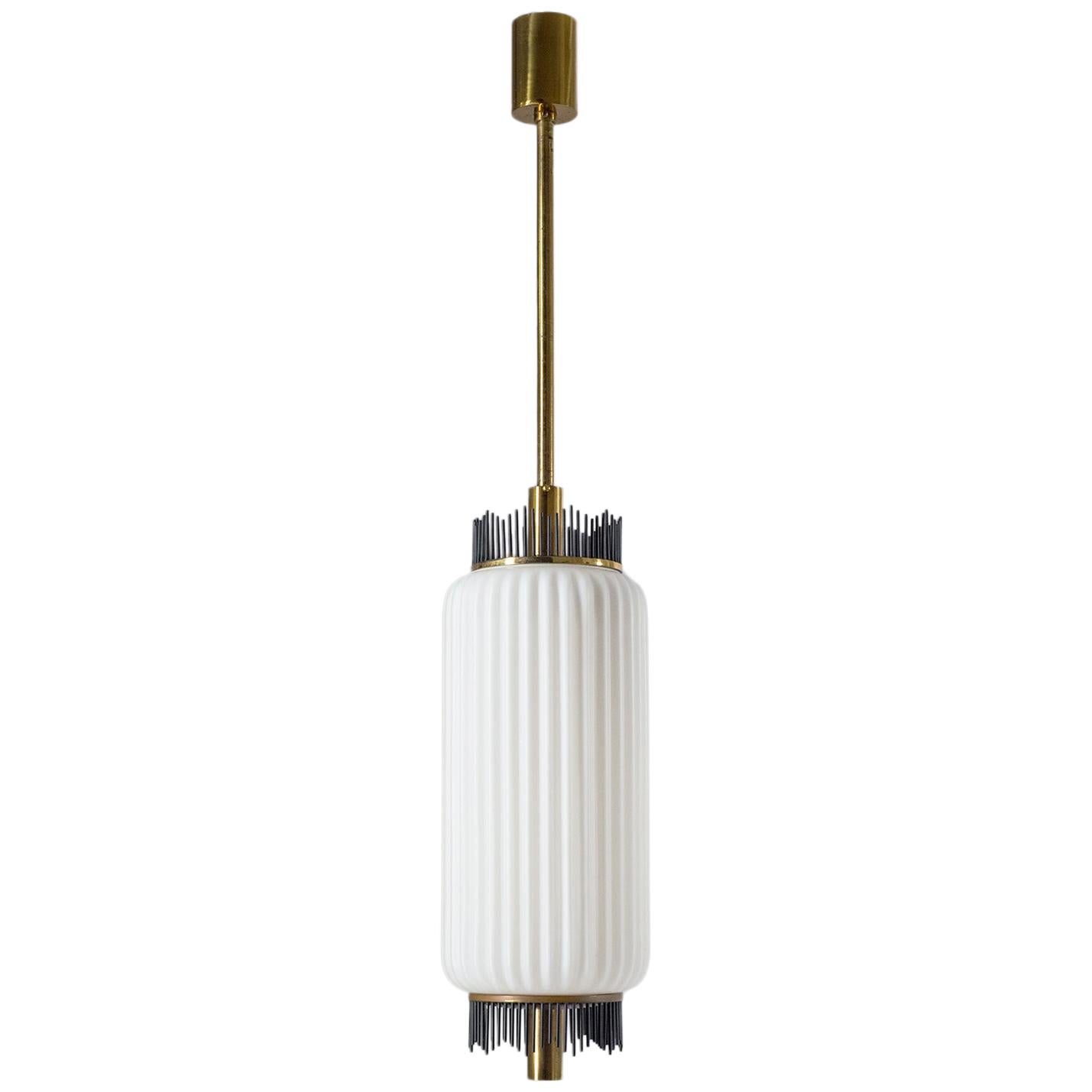 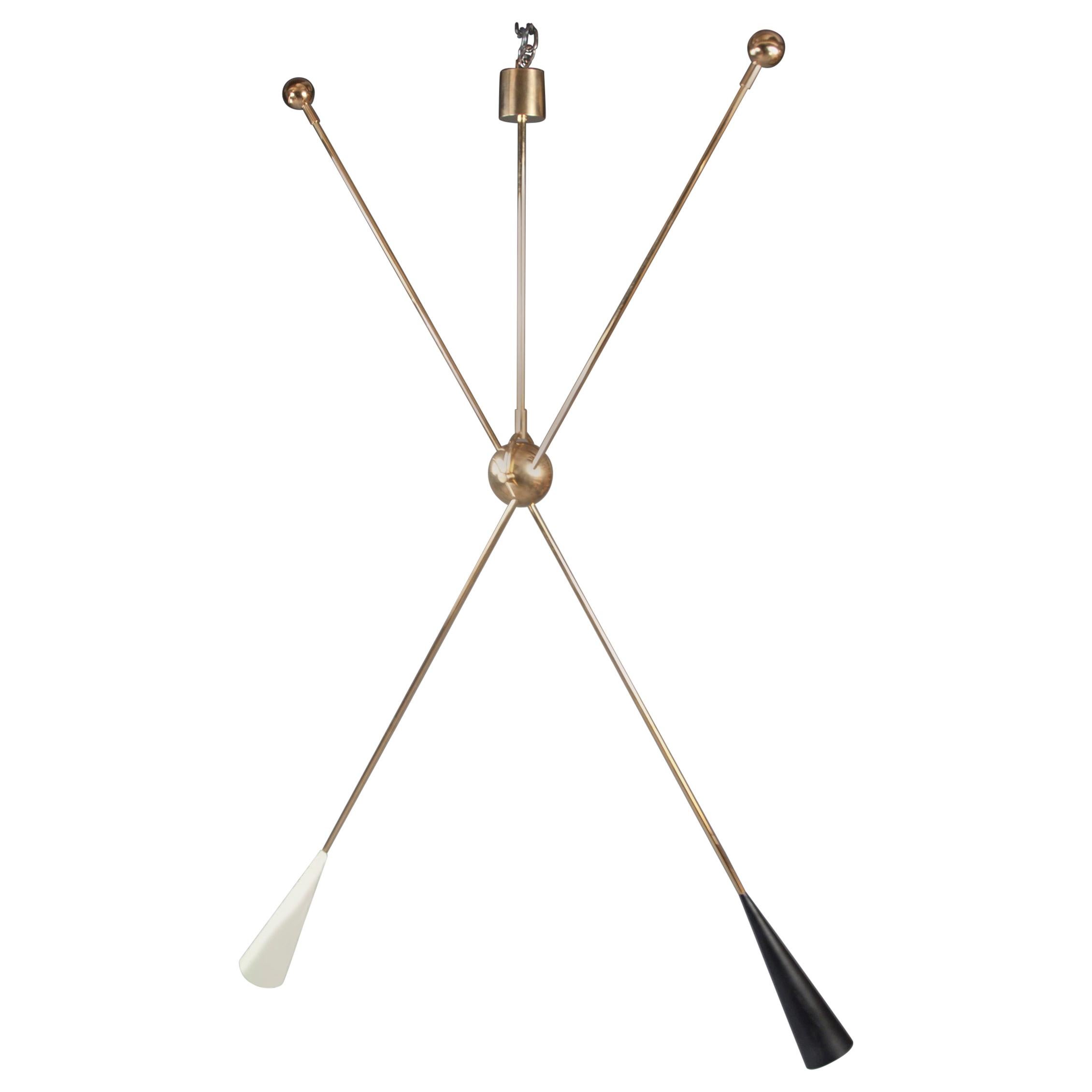 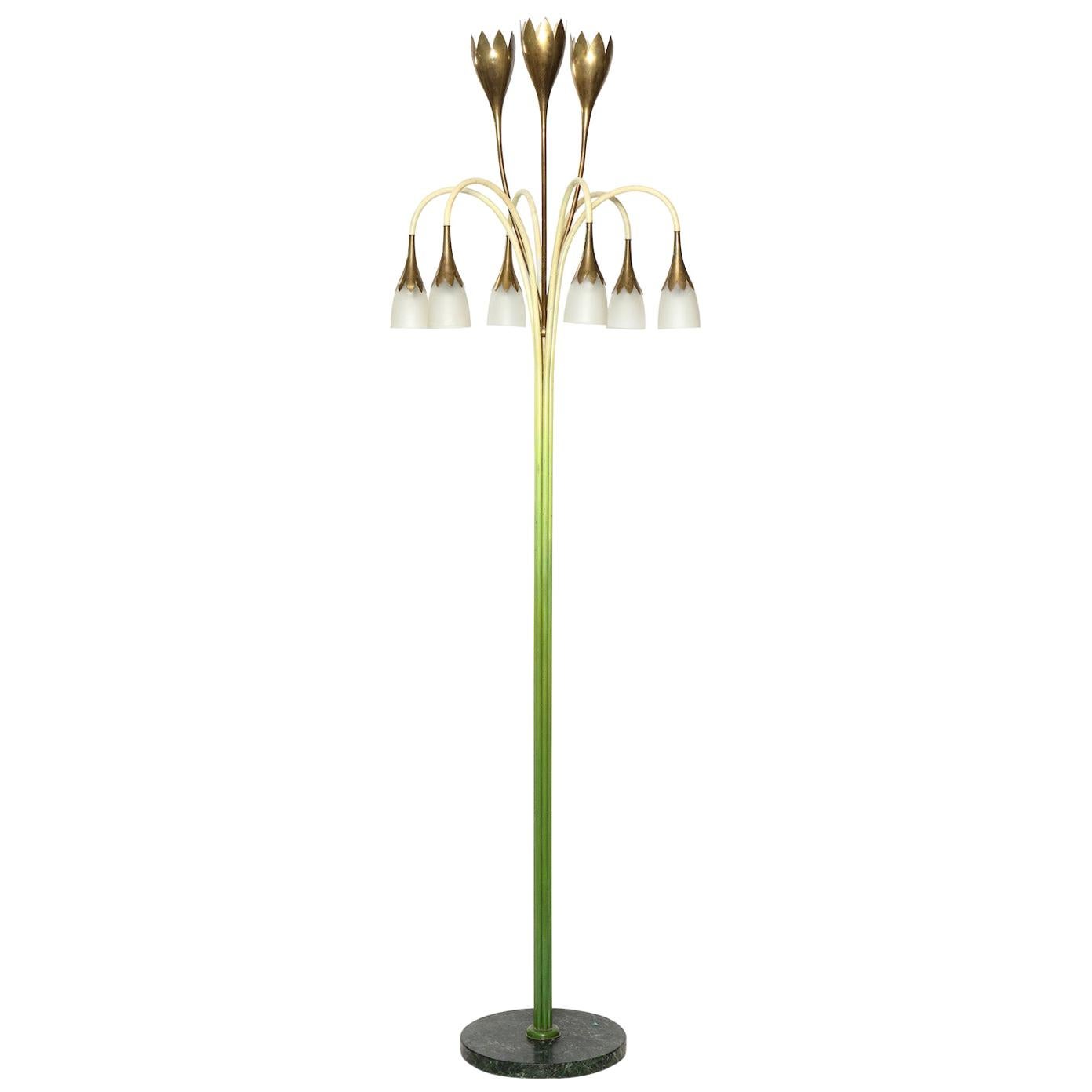 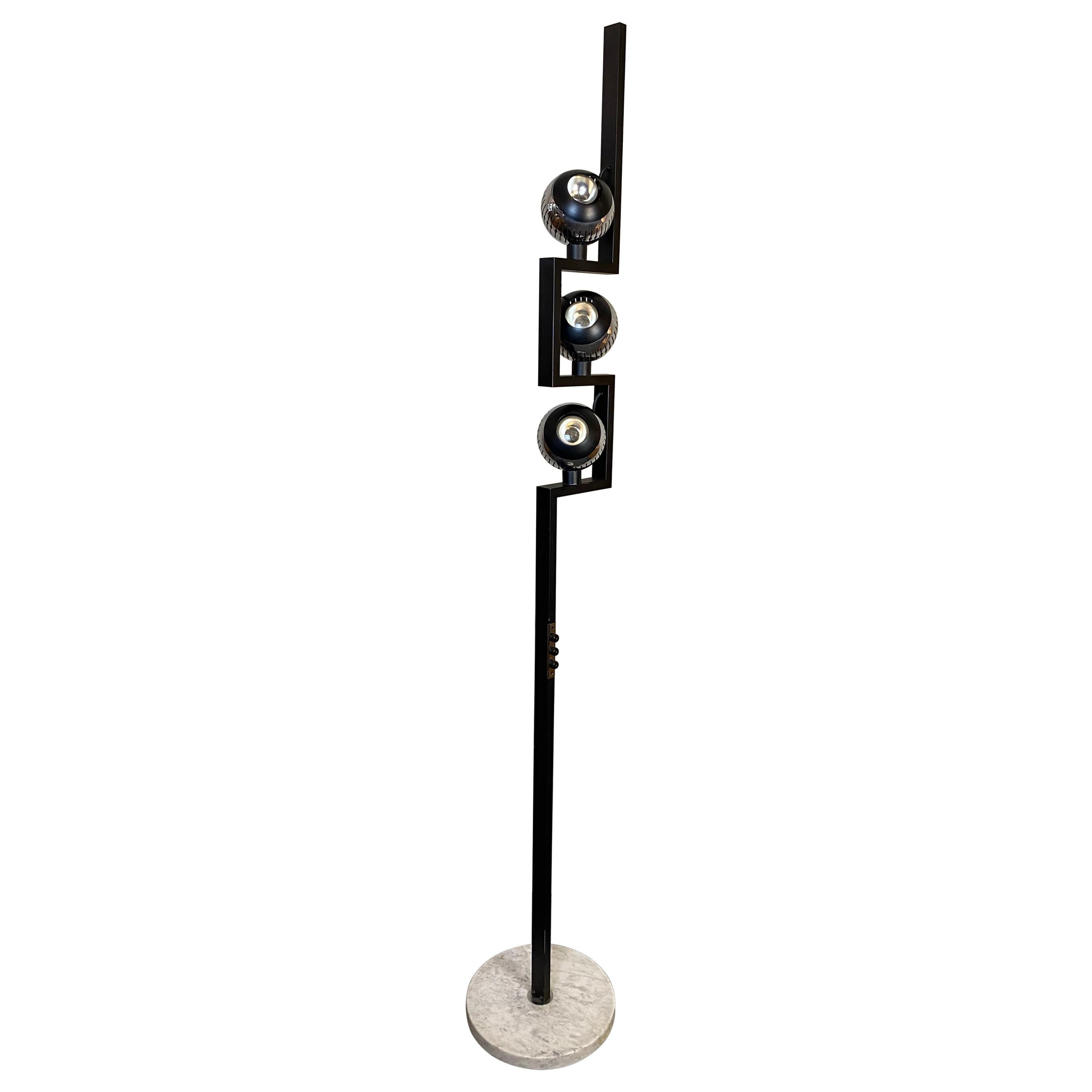 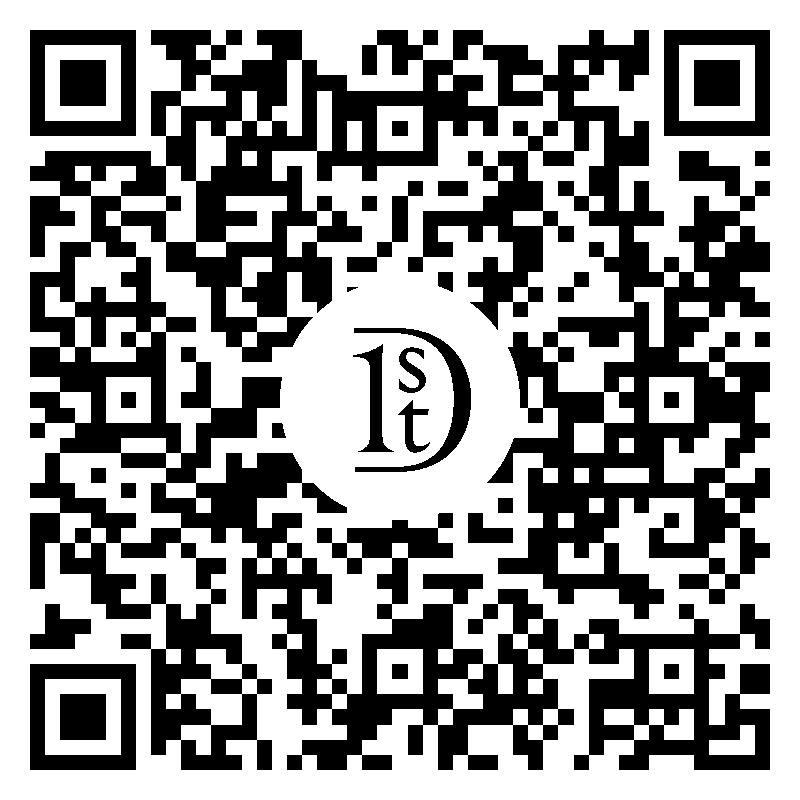 Angelo Lelii for Arredoluce, chandelier model 12369, brass, Italy, circa 1951 Organic chandelier by Angelo Lelii designed for Arredoluce. Six leaves open towards the ceiling and surround the lightbulbs. The hammered, perforated brass has a vivid texture and contributes to the striking look of this lamp. Each leaf is ending in a stem, all stems are coming together in the middle. Special feature is the flexibility of the leaves in the way that they can be moved around and be arranged to your own liking. Model 12369 has a wonderful white highlight in the center. Paolo Angelo Lelii (1911-1979) was born in Ancona, Italy. After his studies at the Superior Institute of Industrial Art, Milan, he lived and worked in Monza. From 1943, Lelii started manufacturing lamps in his own house and in 1946 he advertised his well-known 'Tris' lamp in Domus magazine. It was in 1947 that he founded Arredoluce in Monza, a premier manufacturer of furniture and lighting. In the same year, he exhibited the lamp 12128 at the VII Triennale di Milano, which became known as the Triennale floor lamp. He became an influential designer in Postwar Italy, especially in the field of modern lighting design. During the 1950s, Arredoluce started to collaborate with designers such as Franco Albini, Achille Castiglioni, Gio Ponti, and Ettore Sottsass and also began to experiment with halogen light bulbs for his designs, which lead to the recognizable Arredoluce switch. Thanks to Angelo Lelii’s unique approach to design, Arredoluce quickly built a reputation for creating premium quality products based on clean, simple, and functional designs. Please note that the marble table shown on the photos is also available but not included in the shown price. VAT within the EU: When buying or delivering an item within the EU, VAT usually applies and will be added. 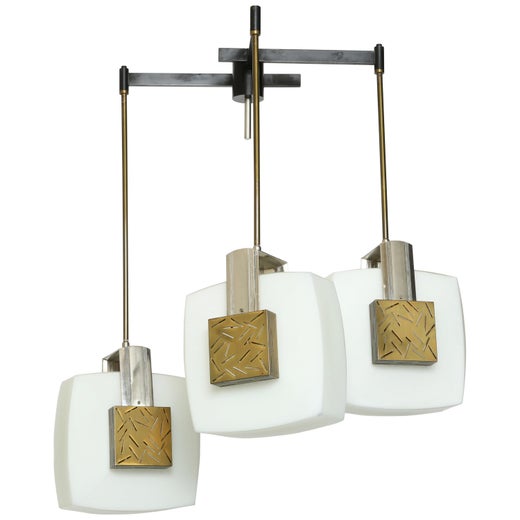 The lighting company Arredoluce opened in 1943, at the start of a golden era of modernist Italian design, and was born of the confluence of an eager entrepreneurial business spirit and a fresh, innovative, forward-looking creative atmosphere.Angelo Lelii (1911–79), the founder of the Arredoluce, which was based in the Milanese district of Monza, was a gifted and at times brilliant designer. He had the insight to commission works from other greats of the day, including Gio Ponti, Vico Magistretti, the brothers Achille and Pier Giacomo Castiglioni and Ettore Sottsass Jr. Lelii’s designs cover a broad aesthetic range. His most famous work, the Triennale floor lamp (circa 1952), is both elegant and practical, with three omnidirectional lighting booms attached to a central pole. His well-known ceiling light of 1954 — in which a conical canister bounces light upward off a lighting-arced enameled-aluminum sheet — is a piece of design poetry. And his 1962 Cobra table lamp has a wild, almost surreal look, featuring a sculptured rod of polished metal with a socket that, like his Eye floor lamp of the early 1960s, holds an eyeball-like directional bulb. Arredoluce also placed few constraints on the creativity of the designers it employed from outside the company. The Castiglioni brothers’ Turbino table lamp of 1951, for example, is a remarkably early example of minimalist design. The company both fostered the tradition-minded aspect of Gio Ponti’s sensibility and produced several of his experimental pieces in Lucite in the 1950s; and Sottsass’s UFO table lamp of 1957, a sandwich of two plastic bubbled tablets on four legs, prefigures the look of his postmodern works for the Memphis Group by more than 20 years. From the stylish and utilitarian to the avant-garde, lighting by Arredoluce includes some of the most diverse, remarkable — and collectible — designs of the late 20th century.

Recognized Seller
These prestigious sellers are industry leaders and represent the highest echelon for item quality and design.
Diamond Seller
These expertly vetted sellers are 1stDibs' most experienced sellers and are rated highest by our customers.
Established in 2006
1stDibs seller since 2012
3,501 sales on 1stDibs
Typical response time: 1 hour
Associations
20th Century Specialists
More From This Seller

$15,500
Angelo Lelii for Arredoluce Rare Chandelier
By Angelo Lelii, Arredoluce
Located in New York, NY
10-arm fixture in brass. Each arm beginning with a colored ball and ending with a corresponding color cone-shade concealing one candelabra socket. Cone shades pivot up and down. The ...
Category