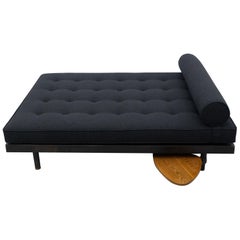 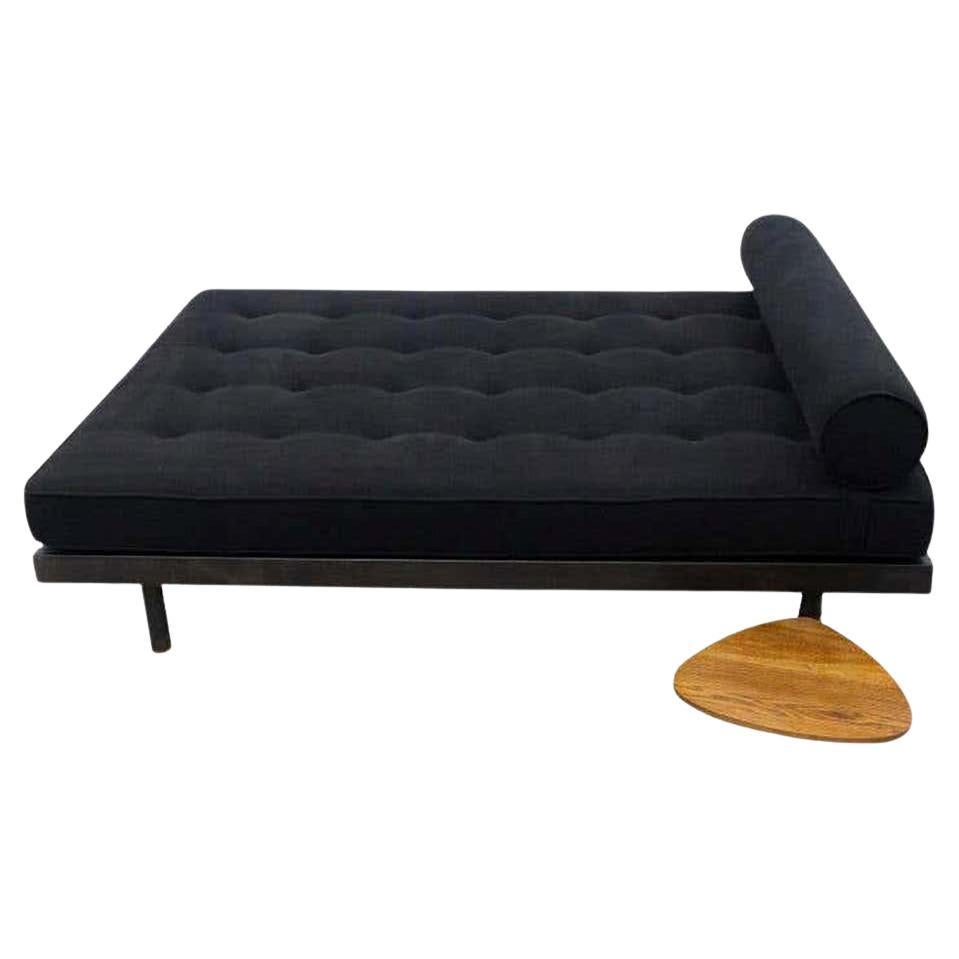 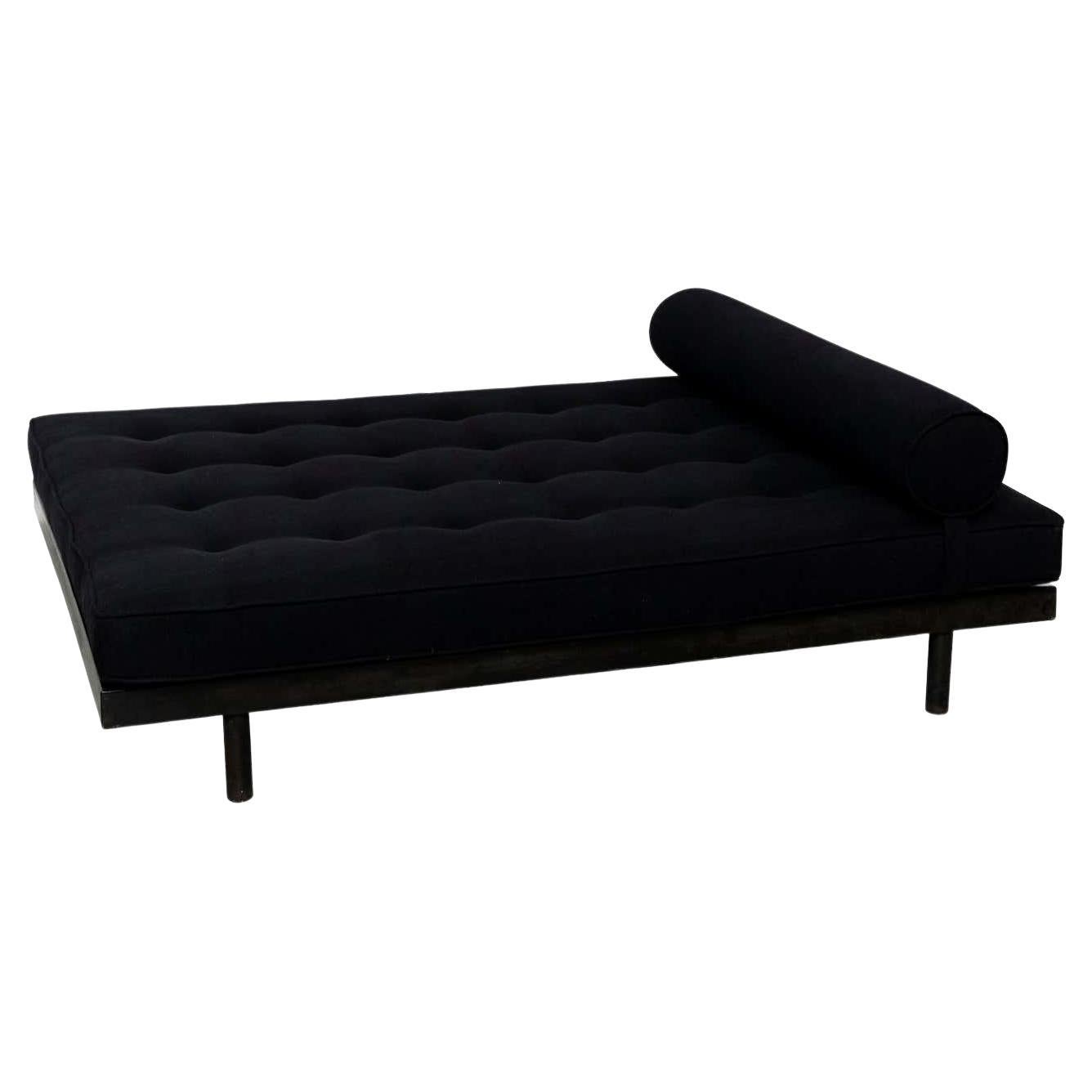 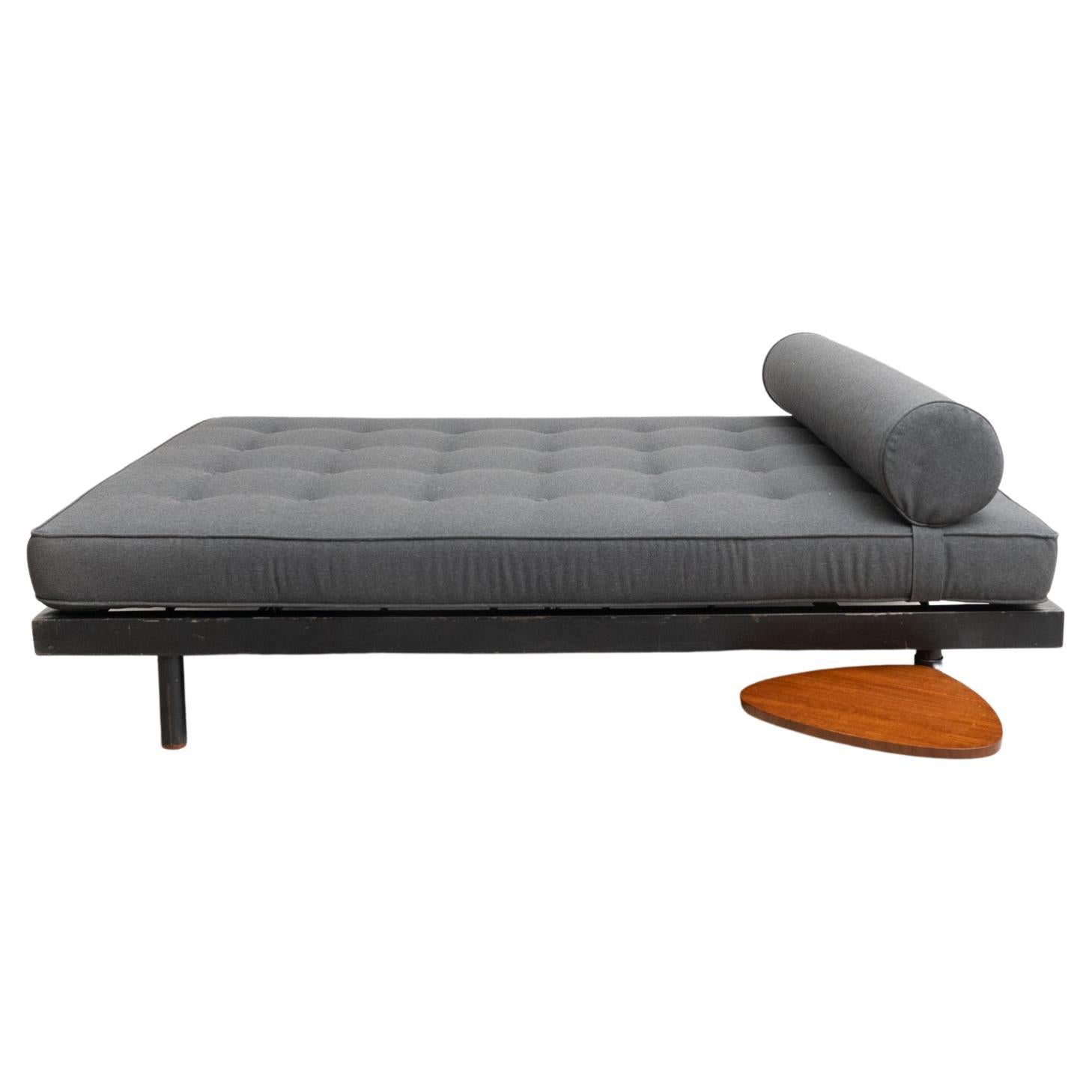 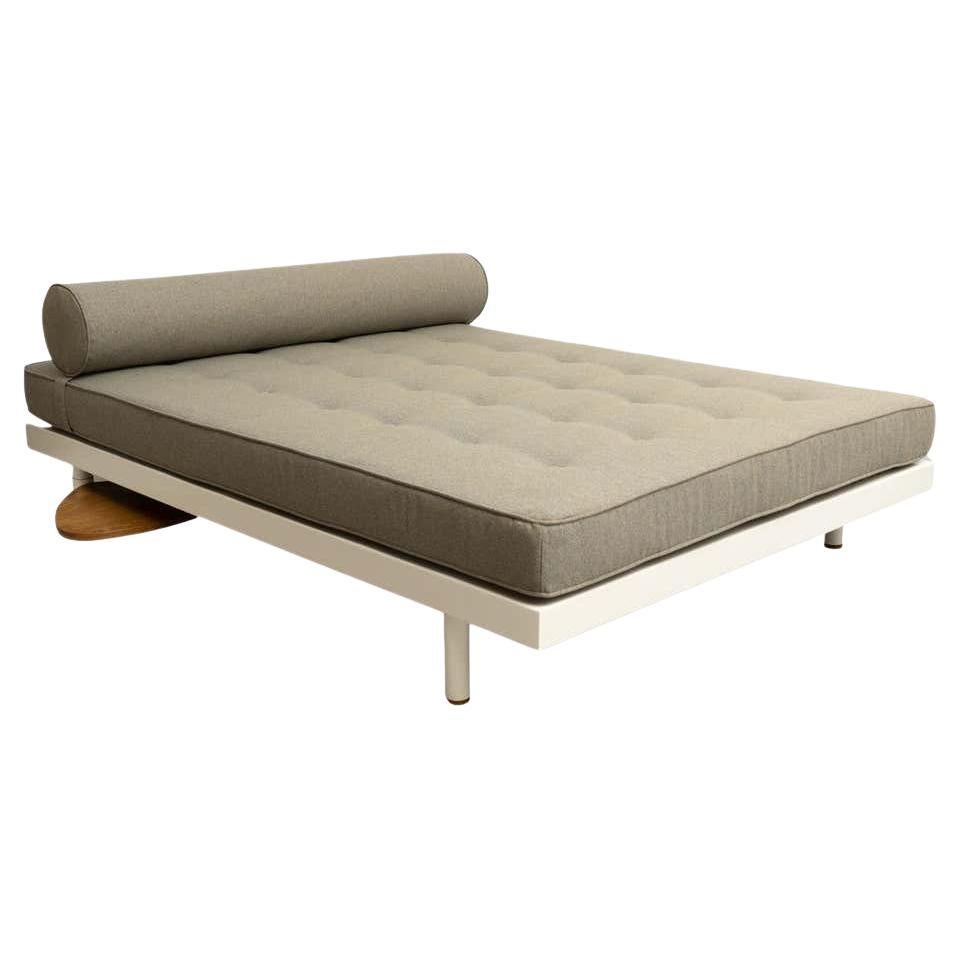 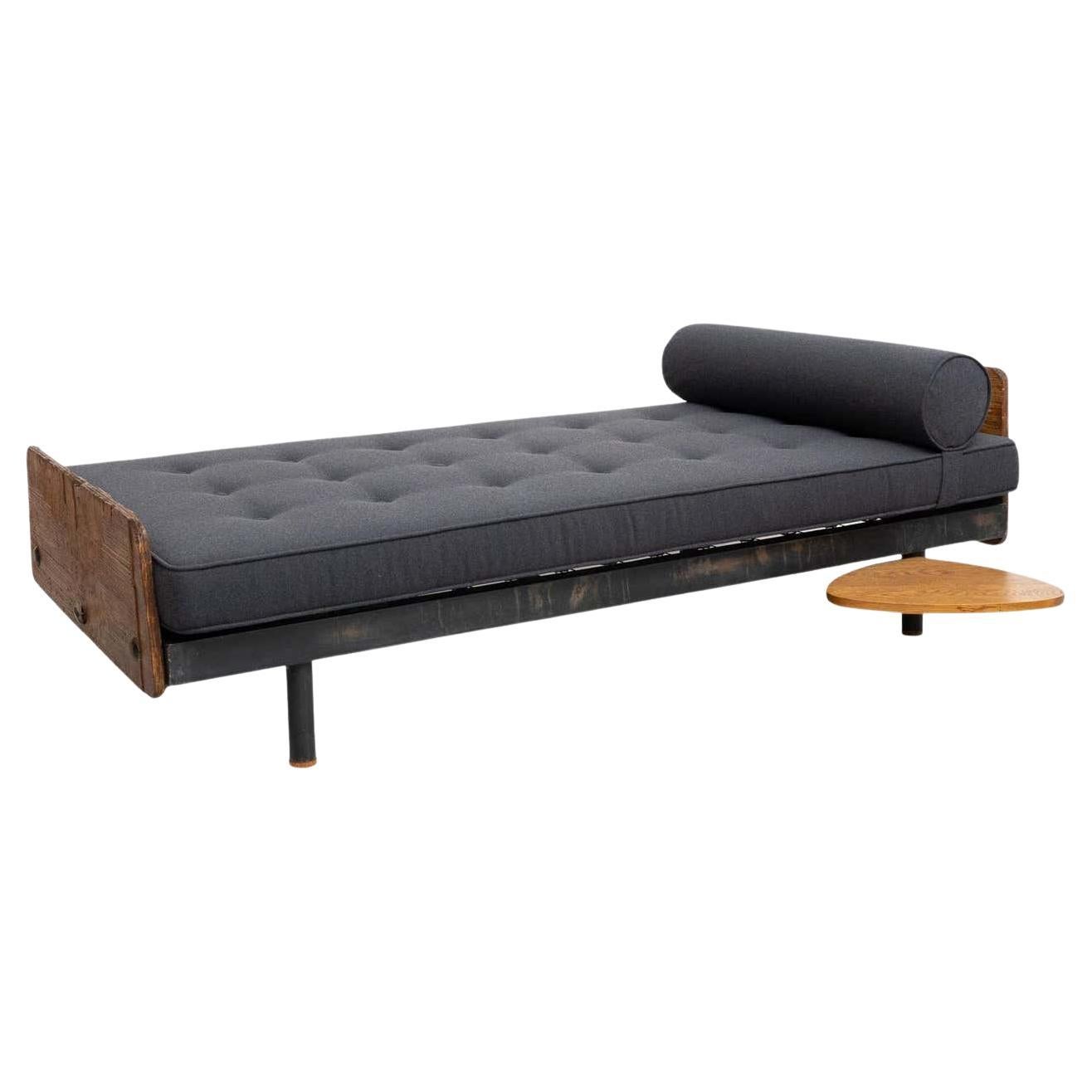 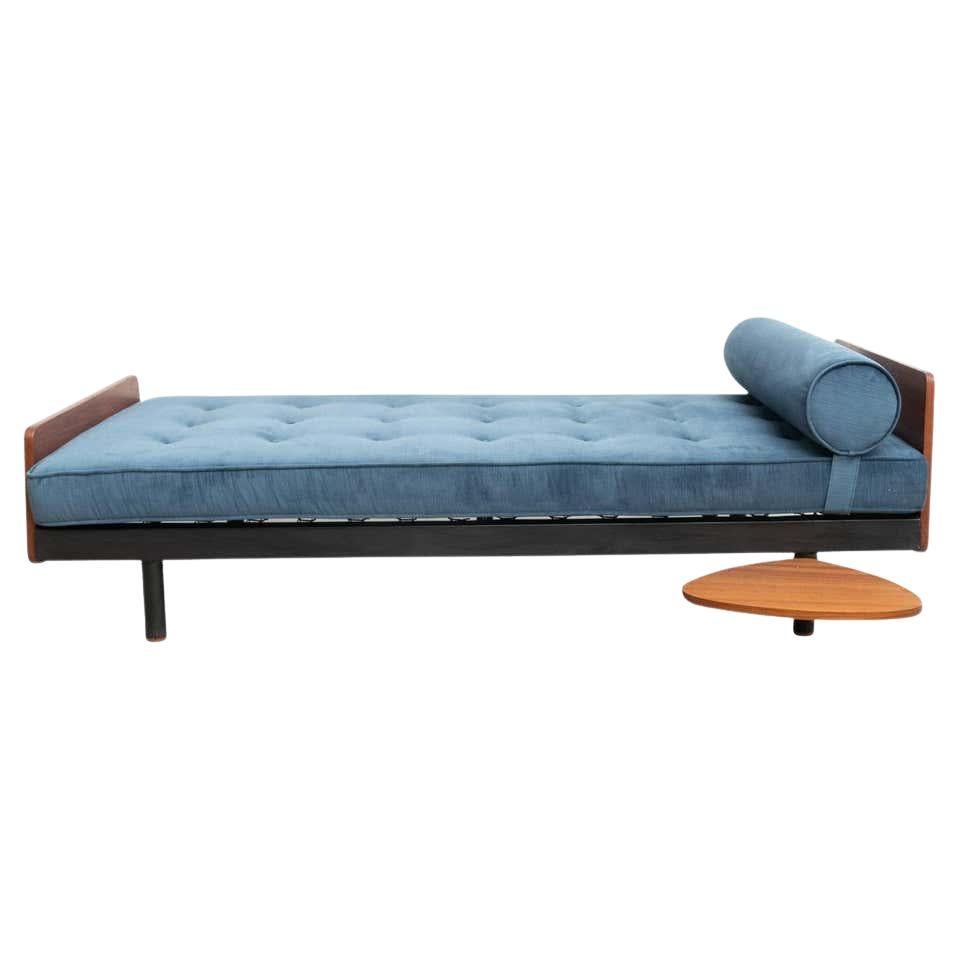 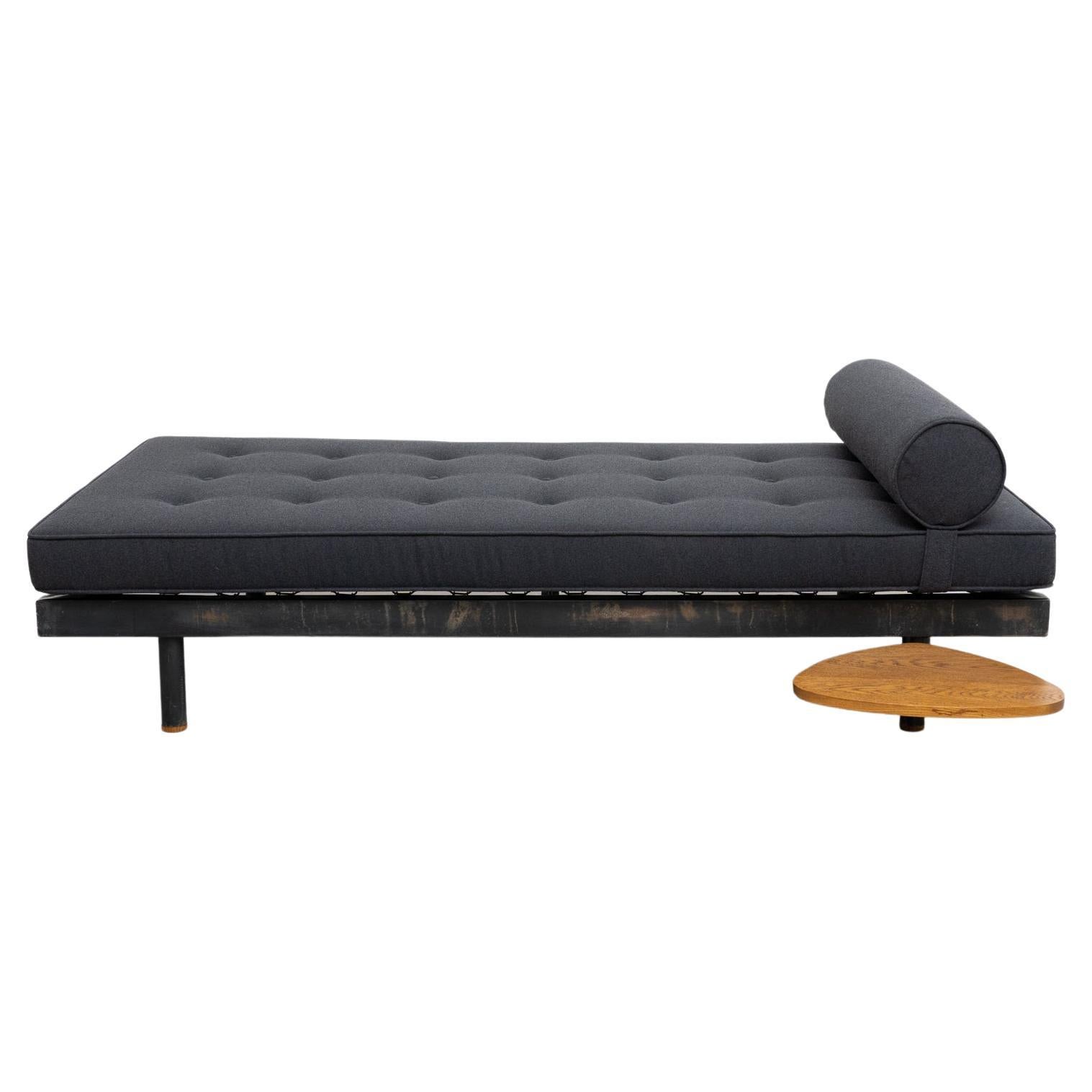 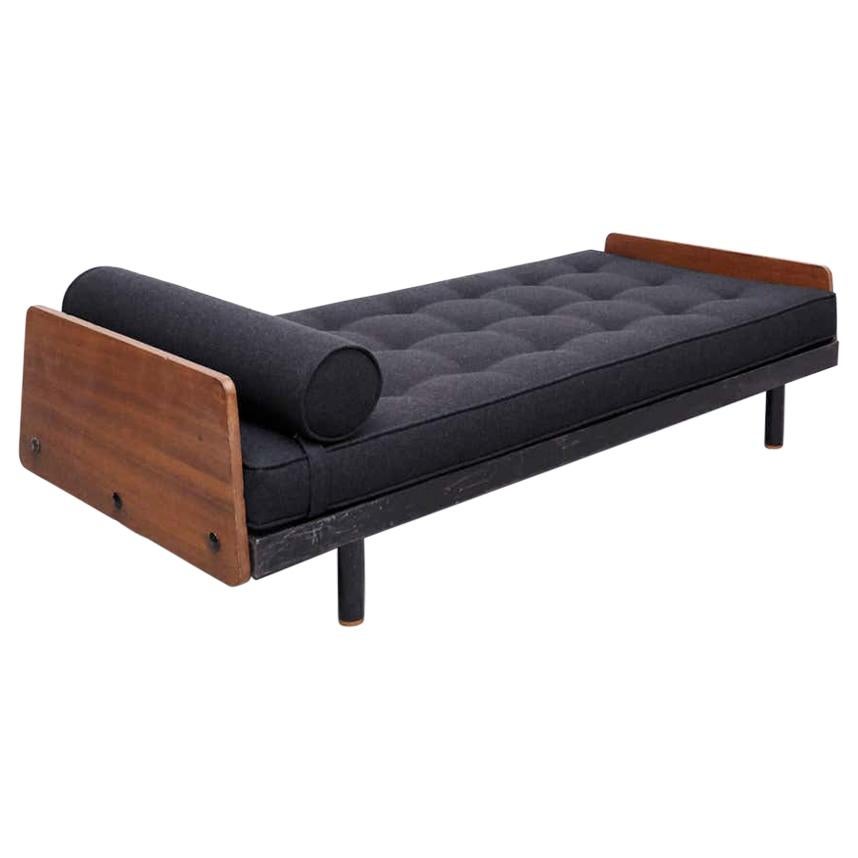 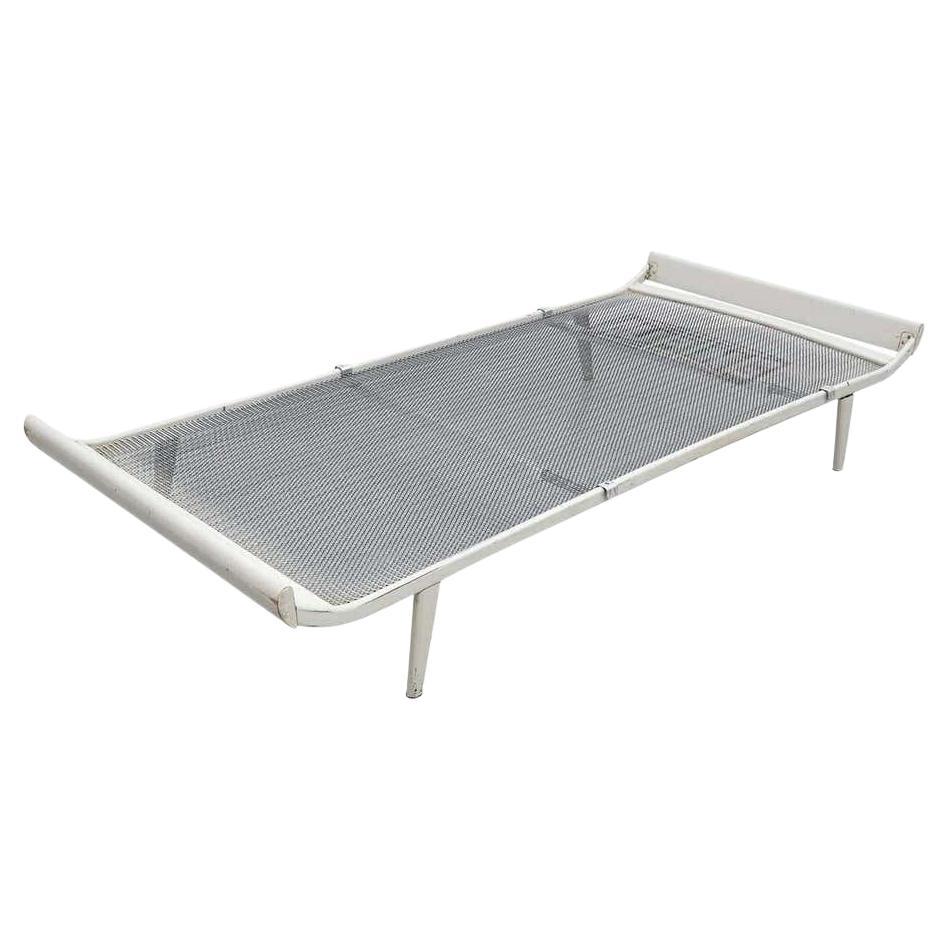 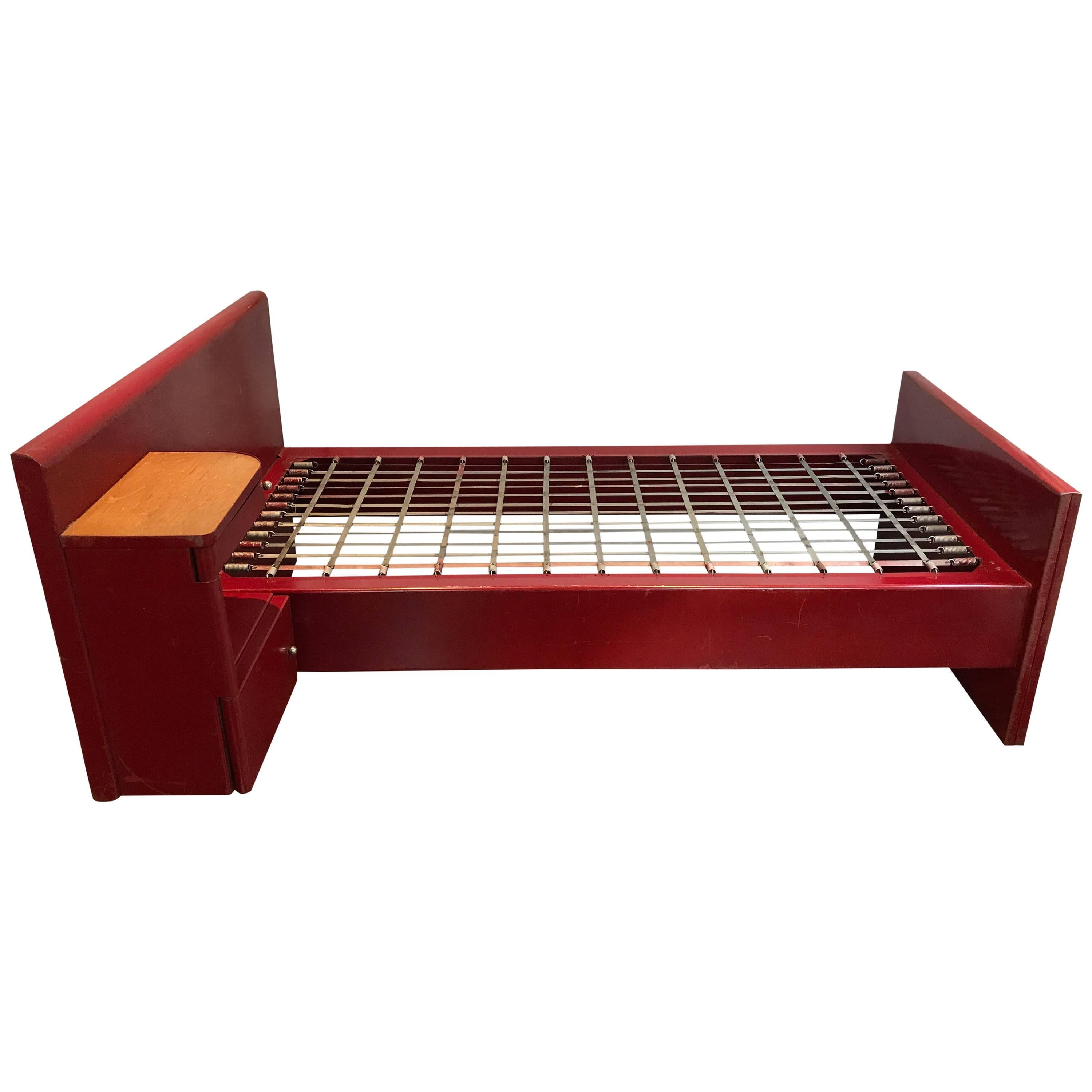 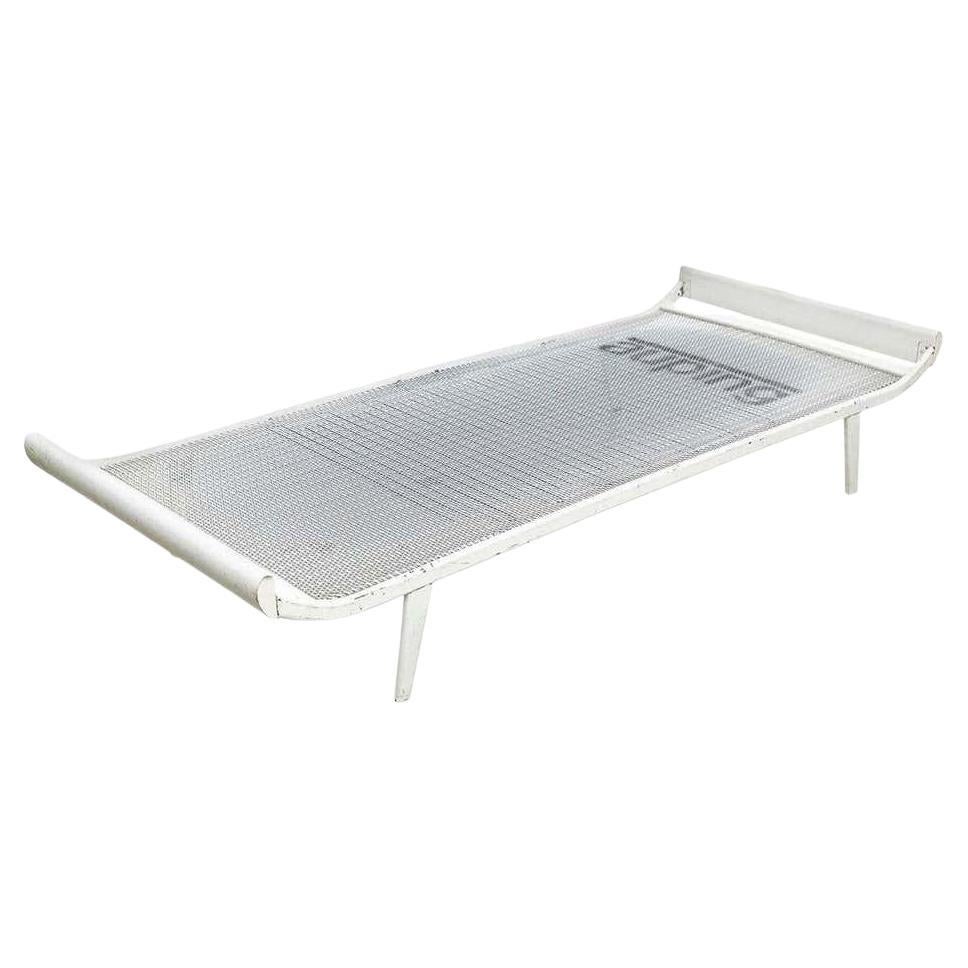 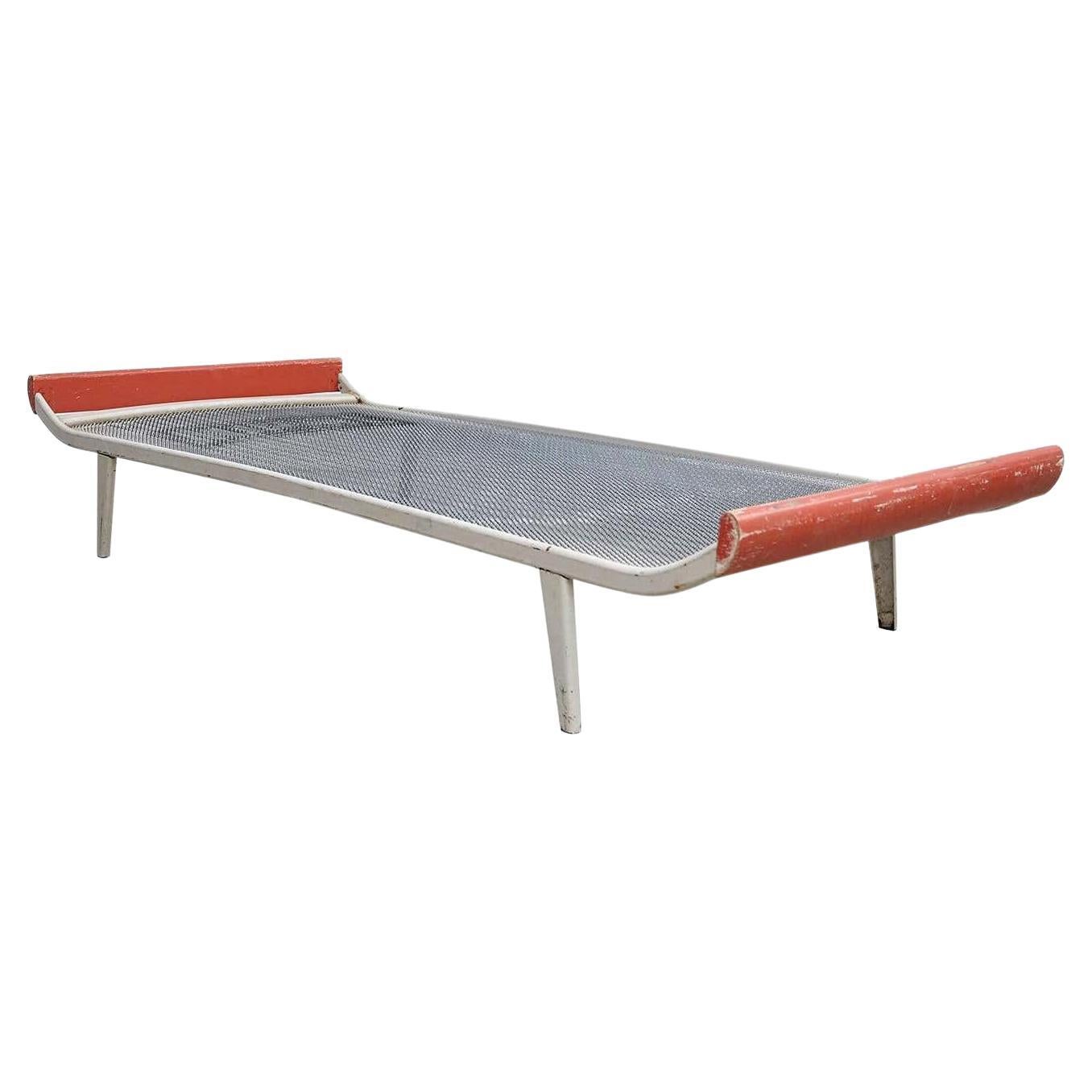 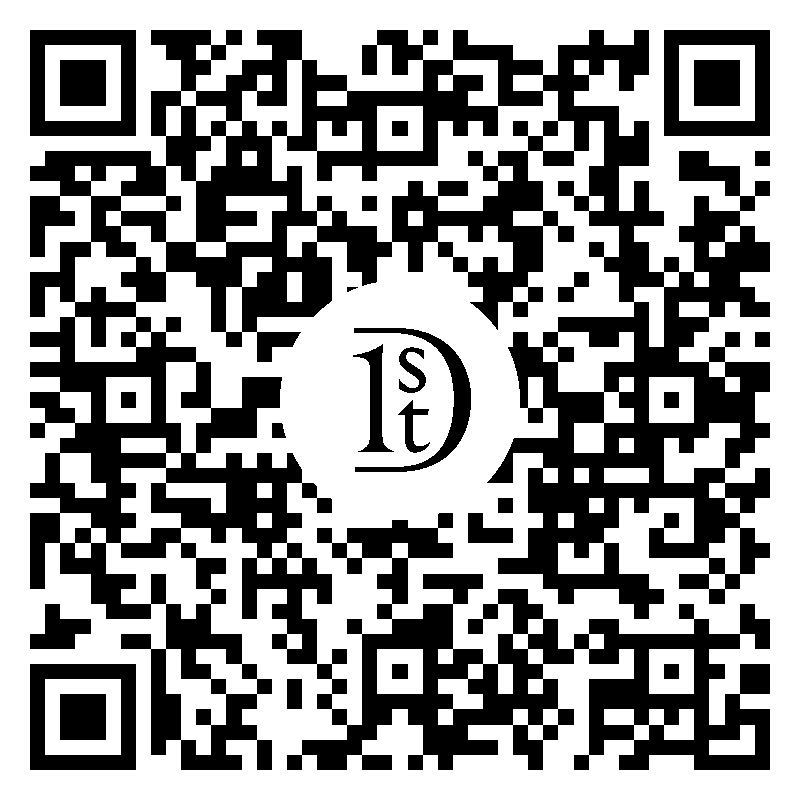 S.C.A.L. double daybed designed by Jean Prouvé. Manufactured by Ateliers Prouve, France, circa 1950. This bed has been restored. Metal frame, new upholstery. Tables had been done new according to original measurements. In original condition, with minor wear consistent with age and use, preserving a beautiful patina. With some traces of rust. Jean Prouvé (1901-1984), French Industrial and furniture designer and architect. Jean Prouvé is one of the most influential furniture designers of the early modern design movement, Jean Prouvé introduced the machine age and Industrial engineered modern design aesthetic to interiors in the steel, aluminum and architecture he created. He then continued her experiments with different materials. Jean Prouvé was born into an artistic family in Nancy, France, his famous father, Victor Prouvé, collaborated with the great Art Nouveau artists Emile Galle and Louis Majorelle as a ceramicist. Jean Prouvé himself was trained as a metalsmith before attending engineering school in Nancy, and his intimate knowledge of metal remained the foundation of his work and career. After opening his own workshop in 1923, Jean Prouvé began producing modern metal furniture of his own design as well as collaborating with some of the best known French modern designers of the day, including Le Corbusier and Charlotte Perriand. Jean Prouvé always regarded himself as more of an engineer and constructor instead of a modern designer. He never designed for the sake of form alone, concentrating instead on the essence of materials, connections and production. Jean Prouvé strove for the most constructionally and materially efficient designs, with such Classic end results as the modern design utilizing his innovative method of folding sheet metal. 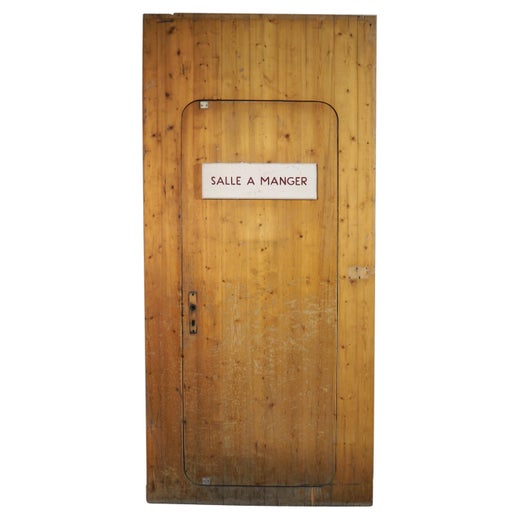 Prouvé was born in Nancy, a city with a deep association with the decorative arts. (It is home, for example, to the famed Daum crystal manufactory.) His father, Victor Prouvé, was a ceramist and a friend and co-worker of such stars of the Art Nouveau era as glass artist Émile Gallé and furniture maker Louis Majorelle. Jean Prouvé apprenticed to a blacksmith, studied engineering, and produced ironwork for such greats of French modernism as the architect Robert Mallet-Stevens. In 1931, he opened the firm Atelier Prouvé. There, he perfected techniques in folded metal that resulted in his Standard chair (1934) and other designs aimed at institutions such as schools and hospitals.

During World War II, Prouvé was a member of the French Resistance, and his first postwar efforts were devoted to designing metal pre-fab housing for those left homeless by the conflict. In the 1950s, Prouvé would unite with Charlotte Perriand and Pierre Jeanneret (Le Corbusier’s cousin) on numerous design projects. In 1952, he and Perriand and artist Sonia Delaunay created pieces for the Cité Internationale Universitaire foundation in Paris, which included the colorful, segmented bookshelves that are likely Prouvé’s and Perriand’s best-known designs. The pair also collaborated on 1954’s Antony line of furniture, which again, like the works on 1stDibs, demonstrated a facility for combining material strength with lightness of form.

Prouvé spent his latter decades mostly as a teacher. His work has recently won new appreciation: in 2008 the hotelier Andre Balazs purchased at auction (hammer price: just under $5 million) the Maison Tropicale, a 1951 architectural prototype house that could be shipped flat-packed, and was meant for use by Air France employees in the Congo. Other current Prouvé collectors include Brad Pitt, Larry Gagosian, Martha Stewart and the fashion designer Marc Jacobs. The rediscovery of Jean Prouvé — given not only the aesthetic and practical power of his designs, but also the social conscience his work represents — marks one of the signal “good” aspects of collecting vintage 20th century design. An appreciation of Jean Prouvé is an appreciation of human decency.

About the Seller
4.9
Located in Barcelona, Spain
Gold Seller
These expertly vetted sellers are highly rated and consistently exceed customer expectations.
Established in 2015
1stDibs seller since 2015
1,259 sales on 1stDibs
Typical response time: 5 hours
More From This SellerView All
People Also Browsed
You May Also Like 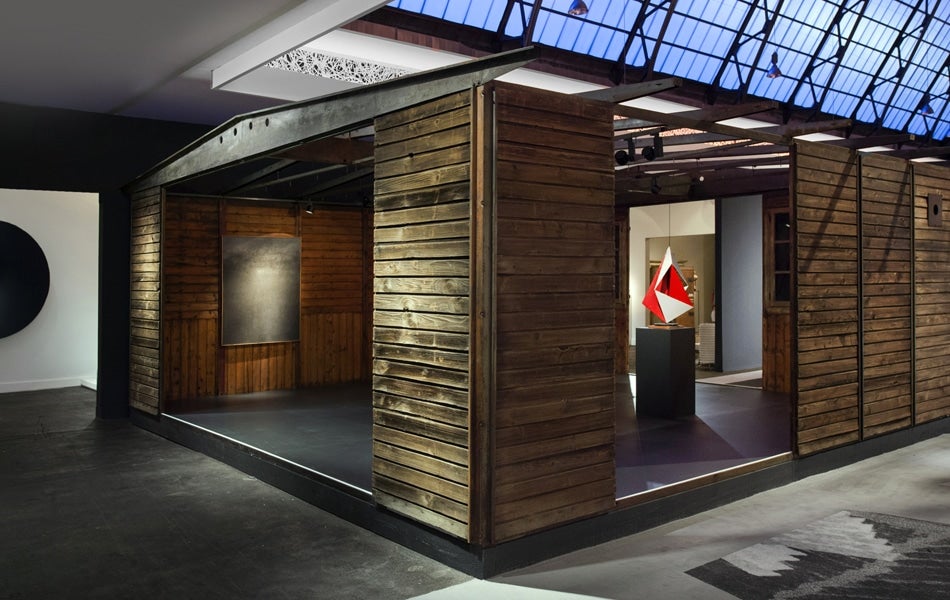 The French modernist made temporary, transportable residences that were intended for refugees. Today, those structures are collector trophies.