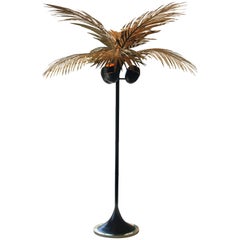 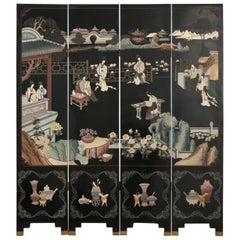 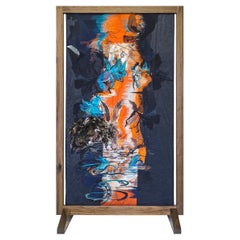 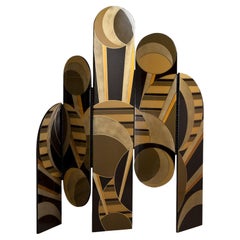 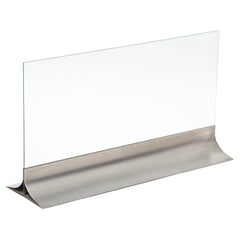 Leather Three-Fold Screen Highlighted in Silver and Gold
By Georg Hulbe
Located in Broadway, GB
Georg Hulbe's leather workshop was based in Hamburg from 1884 presumably until his death in 1917. From 1887-1911 he had outlets in both Berlin and Frankfurt. he is credited with revi...
Category

Wabi Sabi Antique Japanese Room Divider, Mingei Movement 1920
Located in Hønefoss, 30
This unique antique Japanese room divider is a true work of art. Inspired by the mingei movement, it was manufactured in the 1920s, making it a true piece of history. The divider is ...
Category

Lovely Rattan Planter Room Divider, Italy 1960s
Located in Nürnberg, Bayern
Decorated with flowers, it will extremely beautify any room. Overall a very good condition, it has only the upper shelf some paint off. See detail photos.
Category

2-Panel Black Lacquer Screen with Cream Pear by Robert Kuo, Handmade, Limited
By Robert Kuo
Located in Los Angeles, CA
2-panel screen Black lacquer Cream lacquer Hand repousse Copper base Limited edition  Each piece is individually crafted and is unique. Lacquer is a technique that dates back to the...
Category

Room Divider or Screen in Wood
Located in Hemiksem, VAN
A beautiful wooden room divider from the 1980s. This sloping screen is both practical and aesthetic. With its clear and warm wood, it will fit perfectly in both a vintage and modern ...
Category

Room Divider or Screen in Wood

Soft Grey Textile Room Divider, circa 1960
Located in Barcelona, Barcelona
Textile room divider, circa 1960. In original condition, with minor wear consistent of age and use, preserving a beautiful patina. It has some stains as shown on the photos. Un...
Category

"Secrets" Screen Satin Silk, Brass, Silvered Glass, Pyrite Bezel
By Sabrina Landini
Located in Pietrasanta, IT
Inspiration: "Save deep secrets and open up to life" This screen is a work of art and offers an incredible view of life. The combination of art -melted brass (such as butterfly...
Category

The QE2 Metal Marquetry Screen in Hand Patinated Brass — Made in Britain
By Novocastrian, Richy Almond
Located in Washington, GB
A three-panelled standing screen in patinated brass, featuring our metal marquetry finish. Each element is cut, finished, then carefully reassembled by hand. The first of our Seven S...
Category

Contemporary Brass Room Divider Made with Dichroic Glass
By Troy Smith Studio
Located in Toronto, Ontario
The Crown room divider was built and designed by artist Troy Smith. This contemporary and one of a kind room divider is made out of the highest grade of materials. Inspired by glitte...
Category

Separè Room Divider with Semi-Transparent and Natural Fabric by Mingardo

Etched Glass and Eglomise Three Panel Skyscraper Style Art Deco Divider
Located in Swedesboro, NJ
This is a superb skyscraper style French Art deco dressing screen. The screen is deeply etched in multiple depths and has a variety of themese ranging from waves to floral patterns a...
Category

1980s Lacquer Mirror Floral Room Divider
By Karl Springer
Located in Staten Island, NY
Very unique one of a kind custom made lacquer floral shaped room divider from 1980s, attributed to Karl Springer Style There is a tiny spot of the mirror thats damaged but not visib...
Category

Snake Contemporary Sculptural Wood Bronze Patina Room Divider Screen
By Grain
Located in Bainbridge Island, WA
A large screen composed of solid wood posts with hand-cut hinges and bronze sheet. The form evokes prayer flags or a snaking river. The blue color of the bronze is achieved through a...
Category

Rayures Modular Screen Panels, by Ronan & Erwan Bouroullec for Glas Italia
By Ronan and Erwan Bouroullec, Glas Italia
Located in Macherio, IT
Modular screen with hinged panels in laminated and tempered Flutes glass in exclusive yellow and lilac colour or in neutral or “transparent coloured glass” range finishes. It is avai...
Category

Modern Screen Room Divider Marble Base and Leather Nobe Italia
By Dario Cipelletti
Located in piacenza, IT
The appeal of the Lavinia screen resides first in its decorative quality, even before any consideration for its function.‎ Rather than adapt to any sort of interior setting, it enhan...
Category