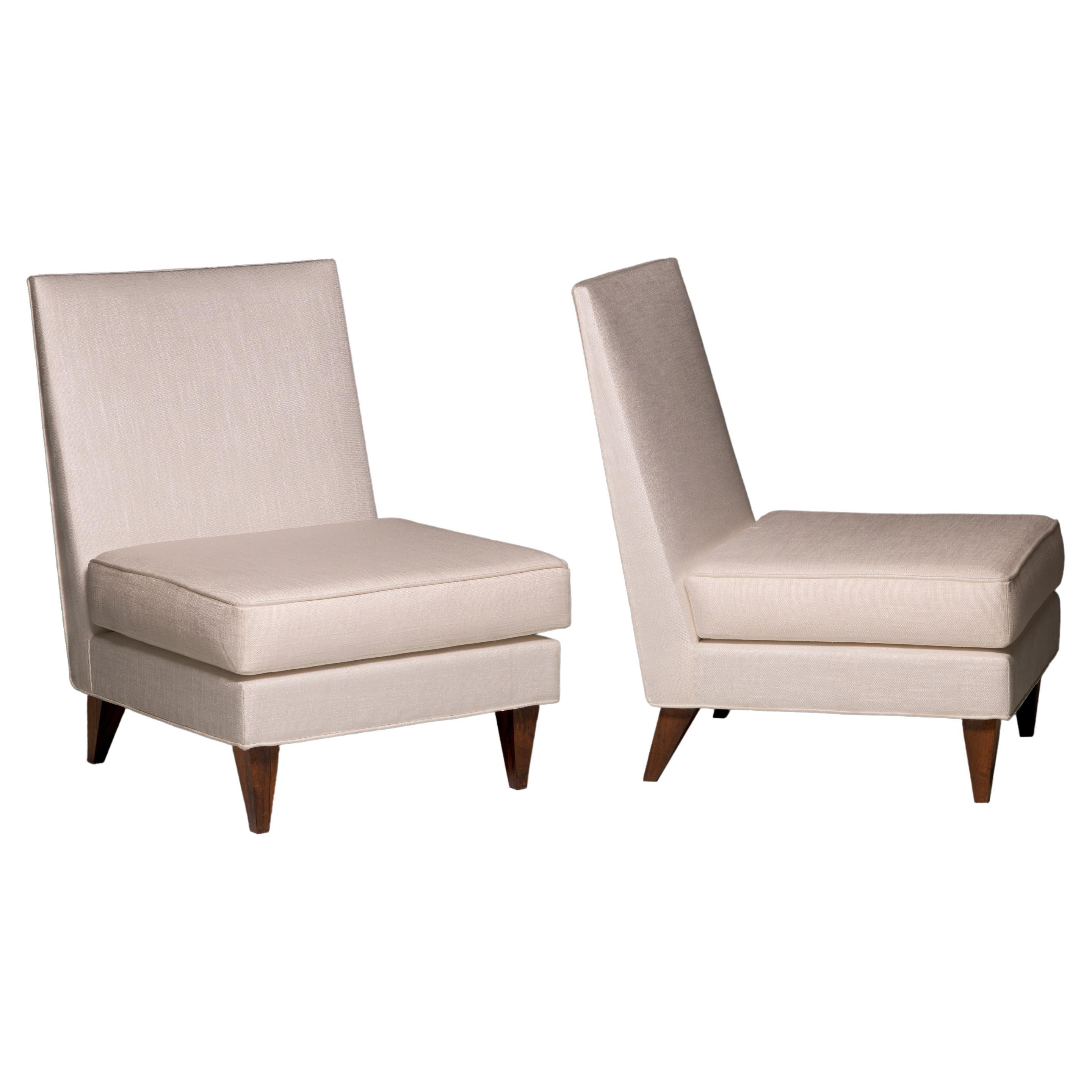 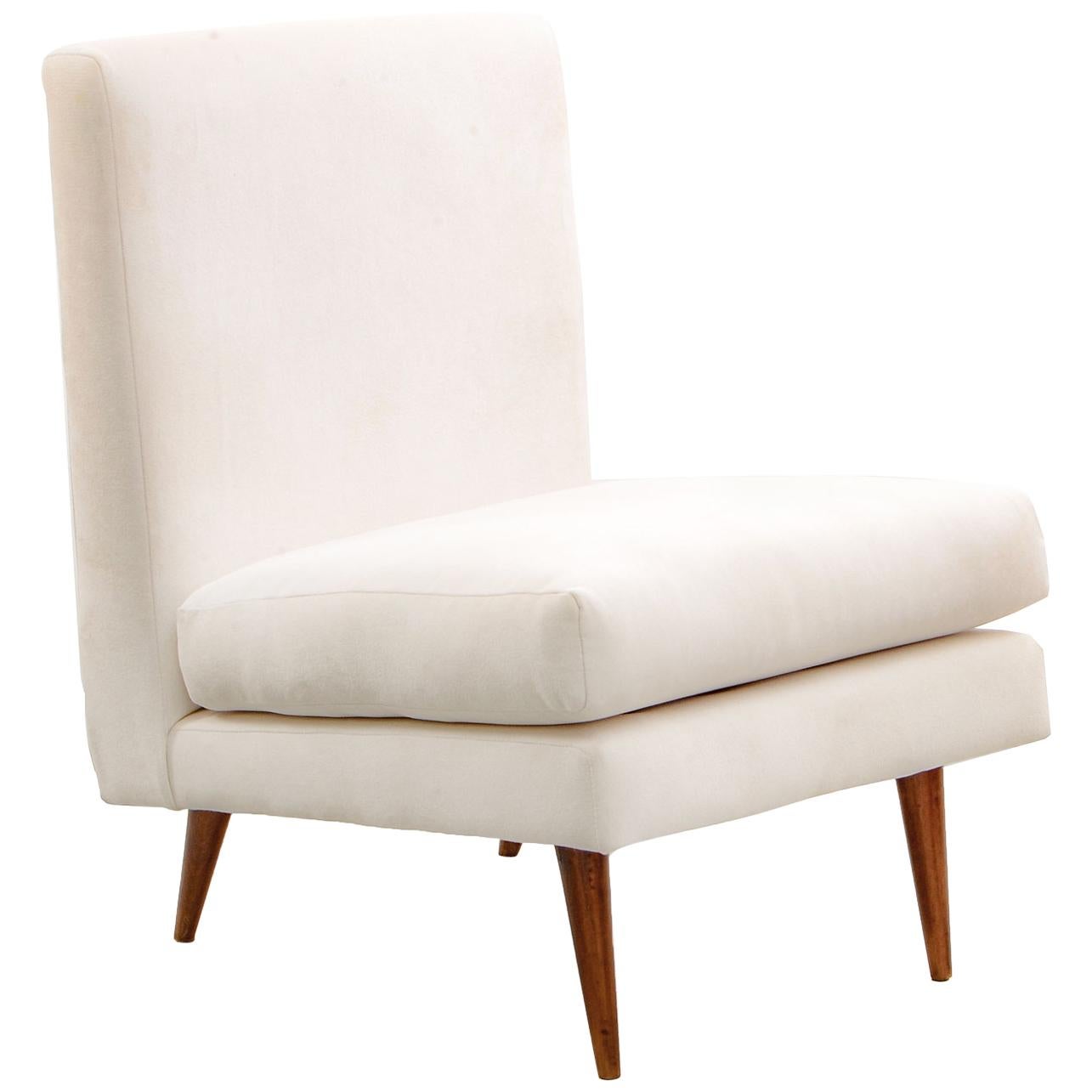 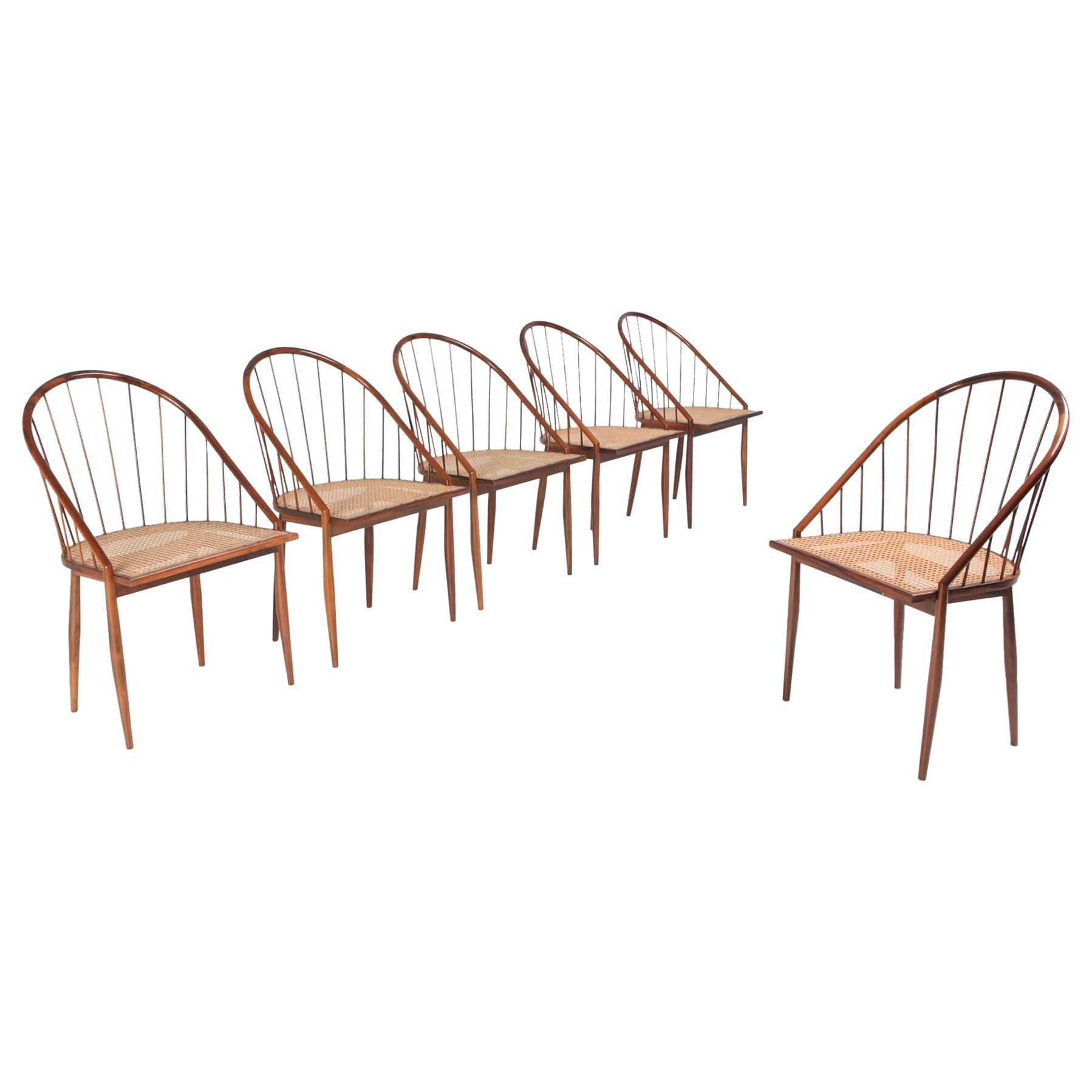 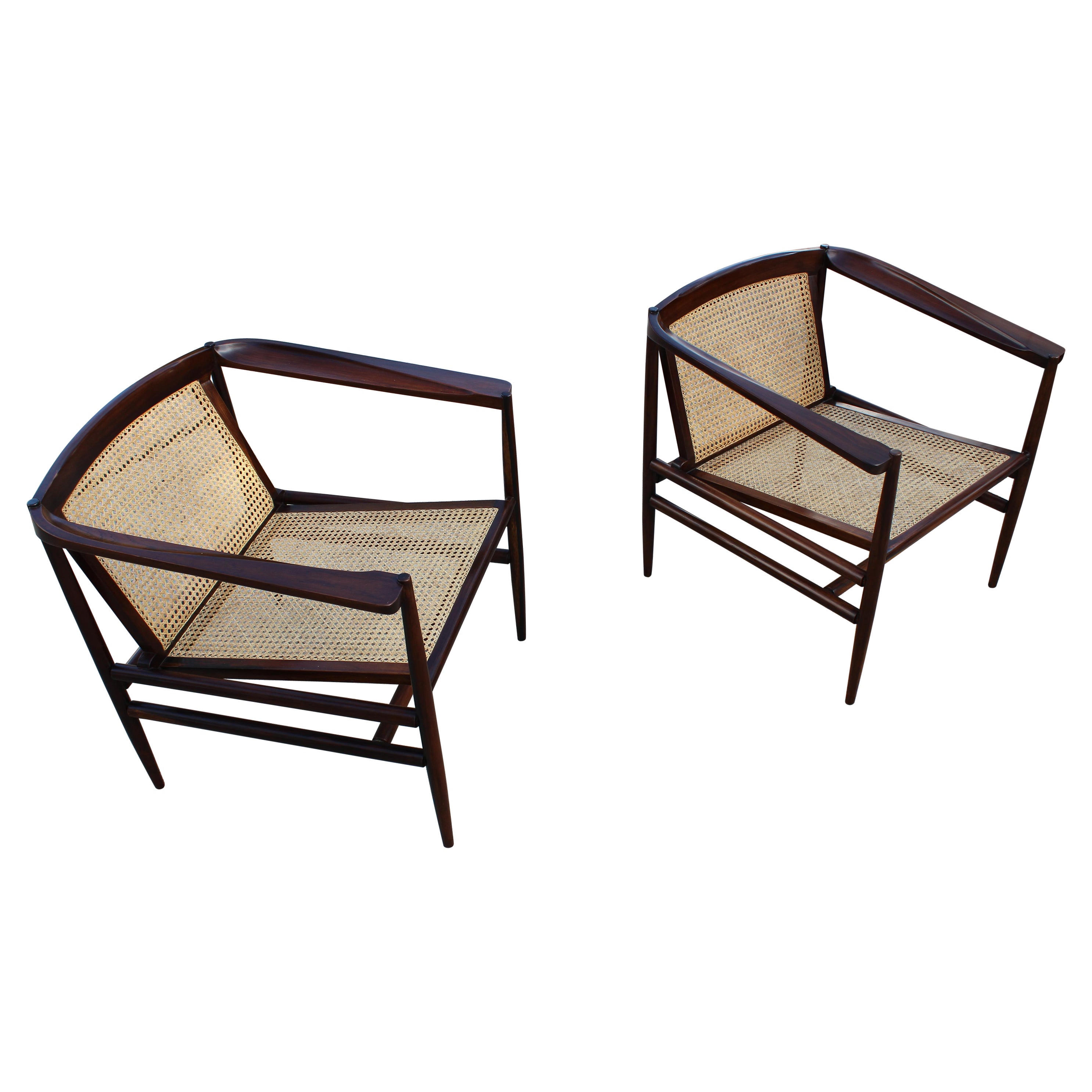 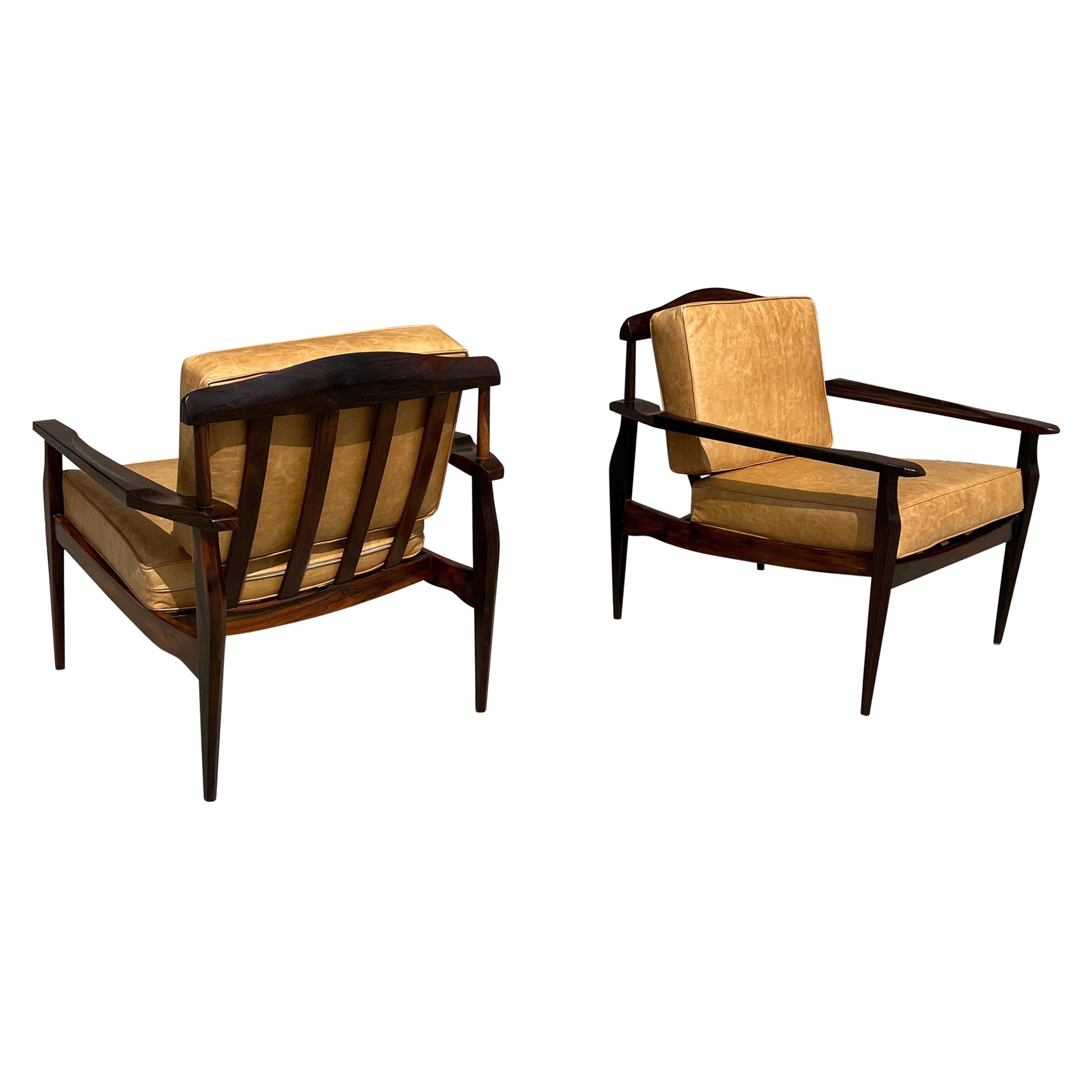 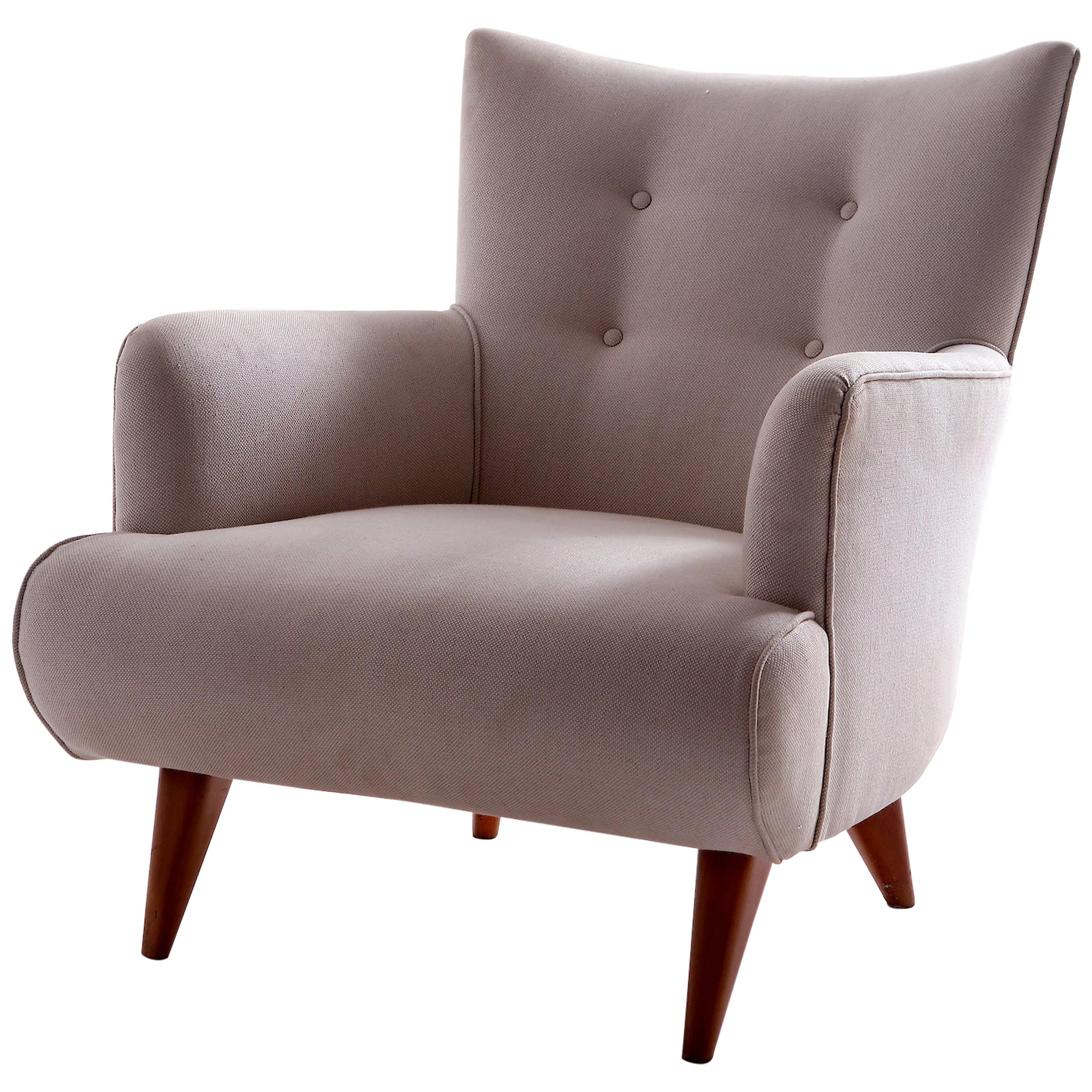 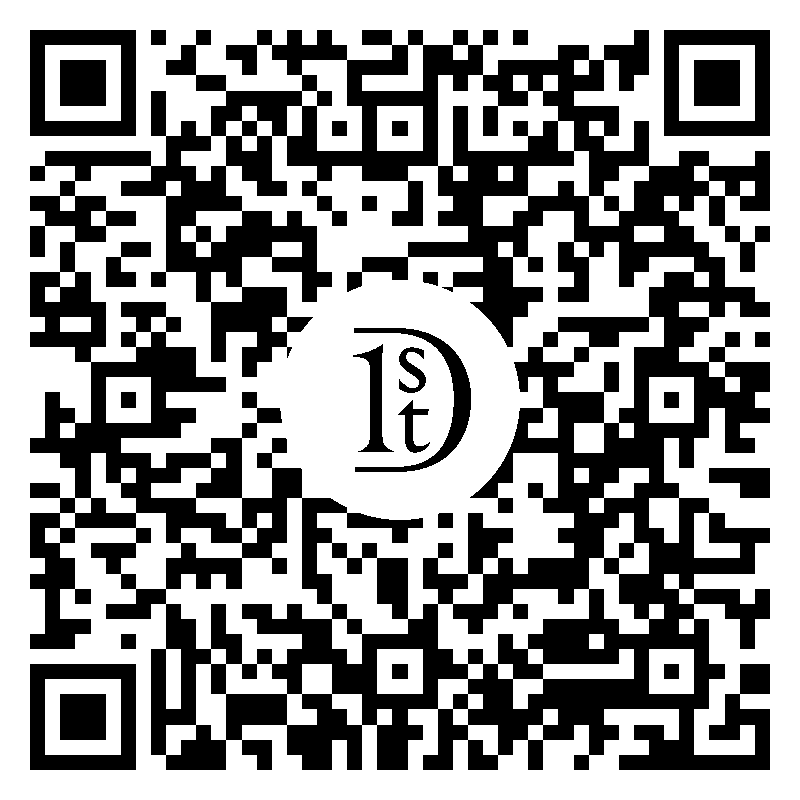 A pair of chairs in Jacaranda and upholstered in black faux leather, made in Brazil, circa 1950 by Joaquim Tenreiro. A total of four chairs are available. 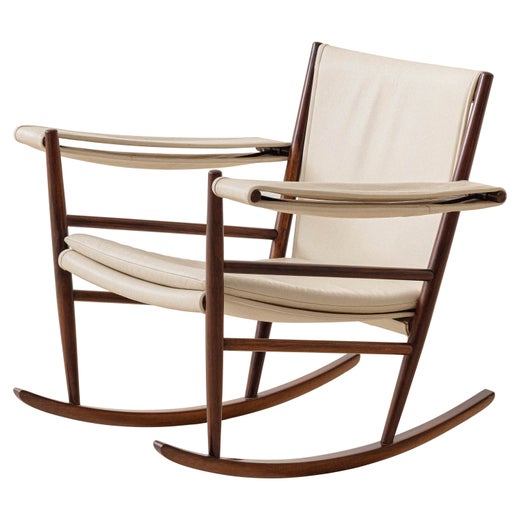 The Portugese-born furniture designer Joaquim Tenreiro was a pioneer of modernism in Brazil, where his work paved the way for the successes of such mid-20th-century design greats as Sergio Rodrigues, Jorge Zalszupin, and Lina Bo Bardi, an Italian-Brazilian architect whose futuristic São Paulo buildings are only part of her legacy.

Tenreiro’s vintage tables, chairs and storage cabinets are known for their simplicity of line and an elegance that is enhanced by the use of richly grained South American hardwoods such as jacaranda and imbuia.

Tenreiro’s father and grandfather were both master woodworkers, under whom he trained in the craft. He had artistic leanings and in the late 1920s enrolled as a university student at the School of Arts and Crafts in Rio de Janeiro, where he joined a group of upstart modernists protesting the staid, retrograde curriculum at the college. At the time, Brazil was culturally mired in a 19th-century mindset that was reflected in an upper-class preference for academic painting and reproduction furnishings in antique European styles. But the progressive spirit that Tenreiro and his colleagues fostered slowly gained force.

With the terms “lightness” and “functionality” as his bywords, Tenreiro opened a furniture-design business in 1943, where one of his first clients was the legendary architect Oscar Niemeyer. The arrival of Brazil’s first democratically elected government, in 1945, lent modernism official sanction, which culminated in the construction of the new capital, Brasília. Tenreiro eventually stepped away from design in the late 1960s to devote his time to sculpture and painting.

To appreciate how revolutionary Tenreiro’s work seemed, one must imagine the heavy, ornately carved, deeply varnished furniture that was the standard for top-end Brazilian interior design in the 1930s. Tenreiro’s chairs and sofas employed slender, softly angular frames that were only lightly stained to highlight the grains of the local woods. He preferred chairs and chaises with caned seats and backrests that “breathe” in the tropical climate, and as a carpenter and joiner he wanted to show off the beauty of Brazilian wood.

Two versions of a three-legged side chair introduced in 1947 serve as a veritable manifesto for a new age in Brazilian design: Using the stack-lamination technique, Tenreiro bonded together a gently contoured seat made of alternating layers of different-colored native woods to produce a magnificent stripe effect. These chairs, like all Tenreiro works, demonstrate the enduring power of simple design and superb construction — with a teaspoon of flair.

1stDibs Buyer Protection Guaranteed
If your item arrives not as described, we’ll work with you and the seller to make it right. Learn More
About the Seller
5.0
Located in San Francisco, CA
Recognized Seller
These prestigious sellers are industry leaders and represent the highest echelon for item quality and design.
Platinum Seller
These expertly vetted sellers are 1stDibs' most experienced sellers and are rated highest by our customers.
Established in 2011
1stDibs seller since 2011
194 sales on 1stDibs
Typical response time: 3 hours
Associations
20th Century Specialists
More From This SellerView All
People Also Browsed
You May Also Like
Featured in Design ValuesView All