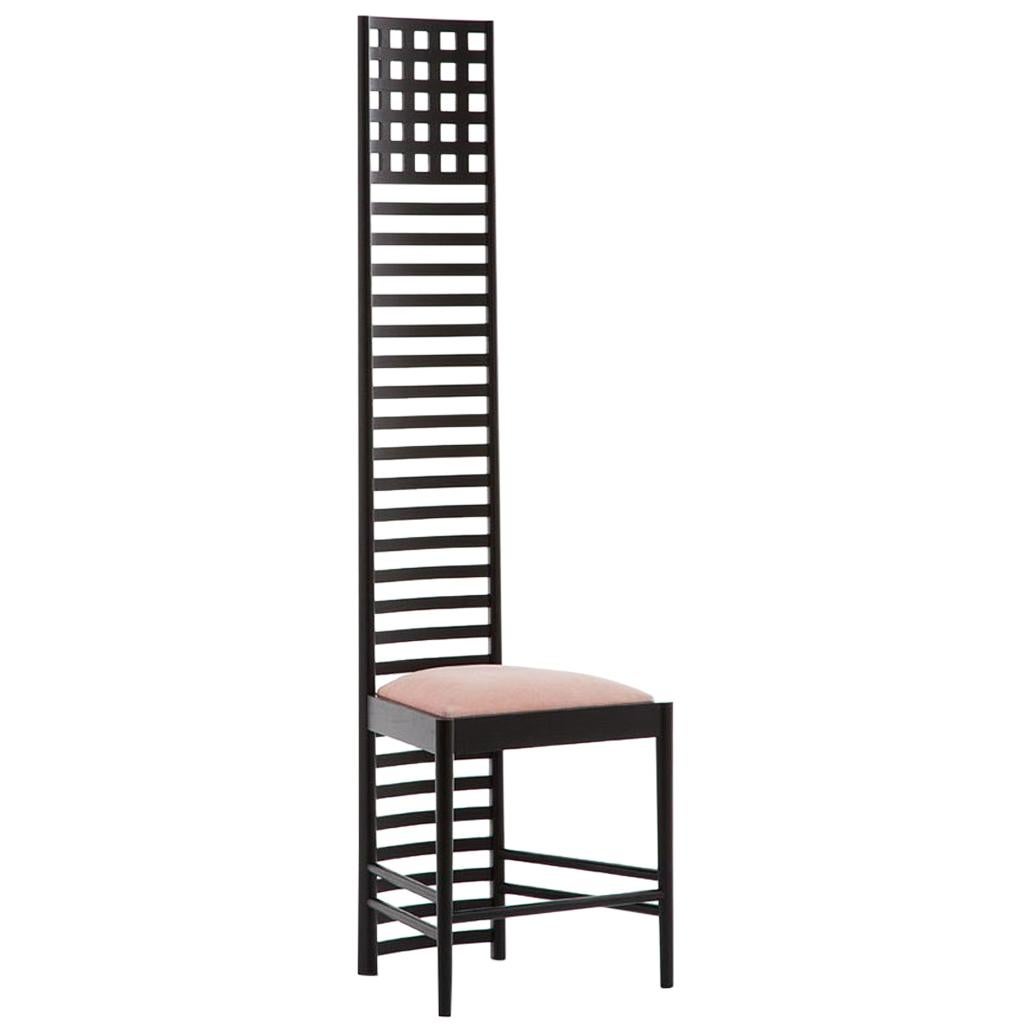 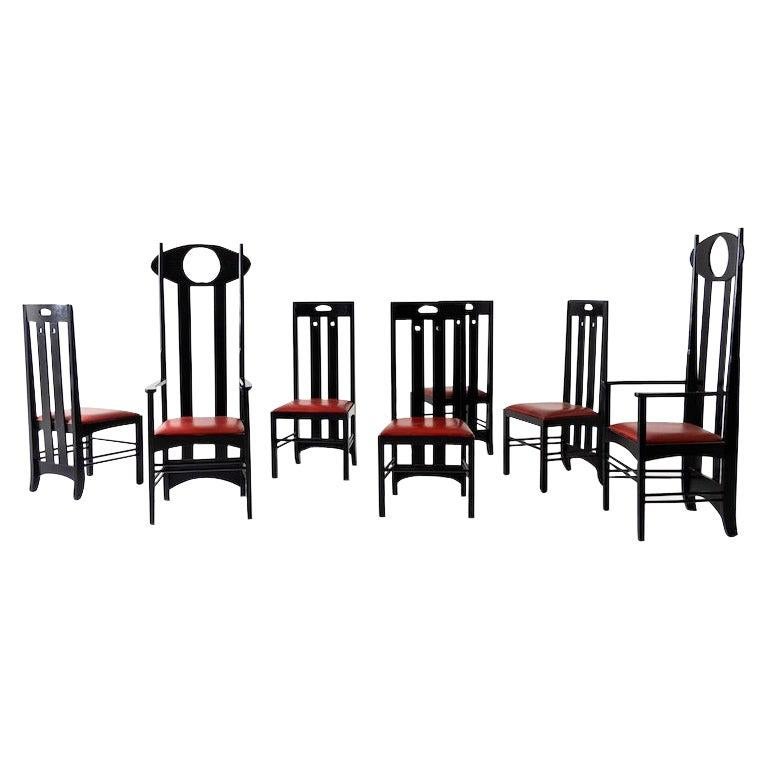 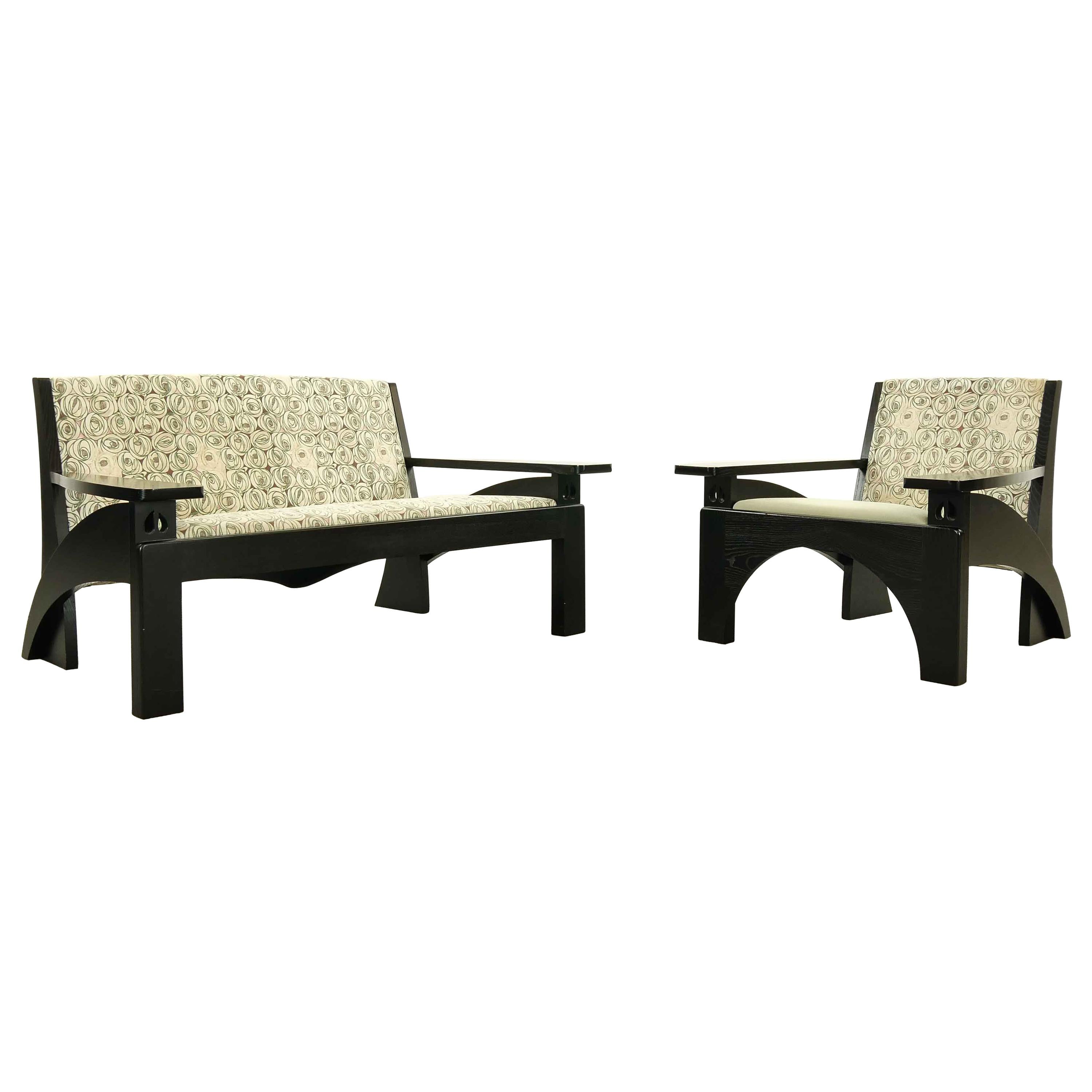 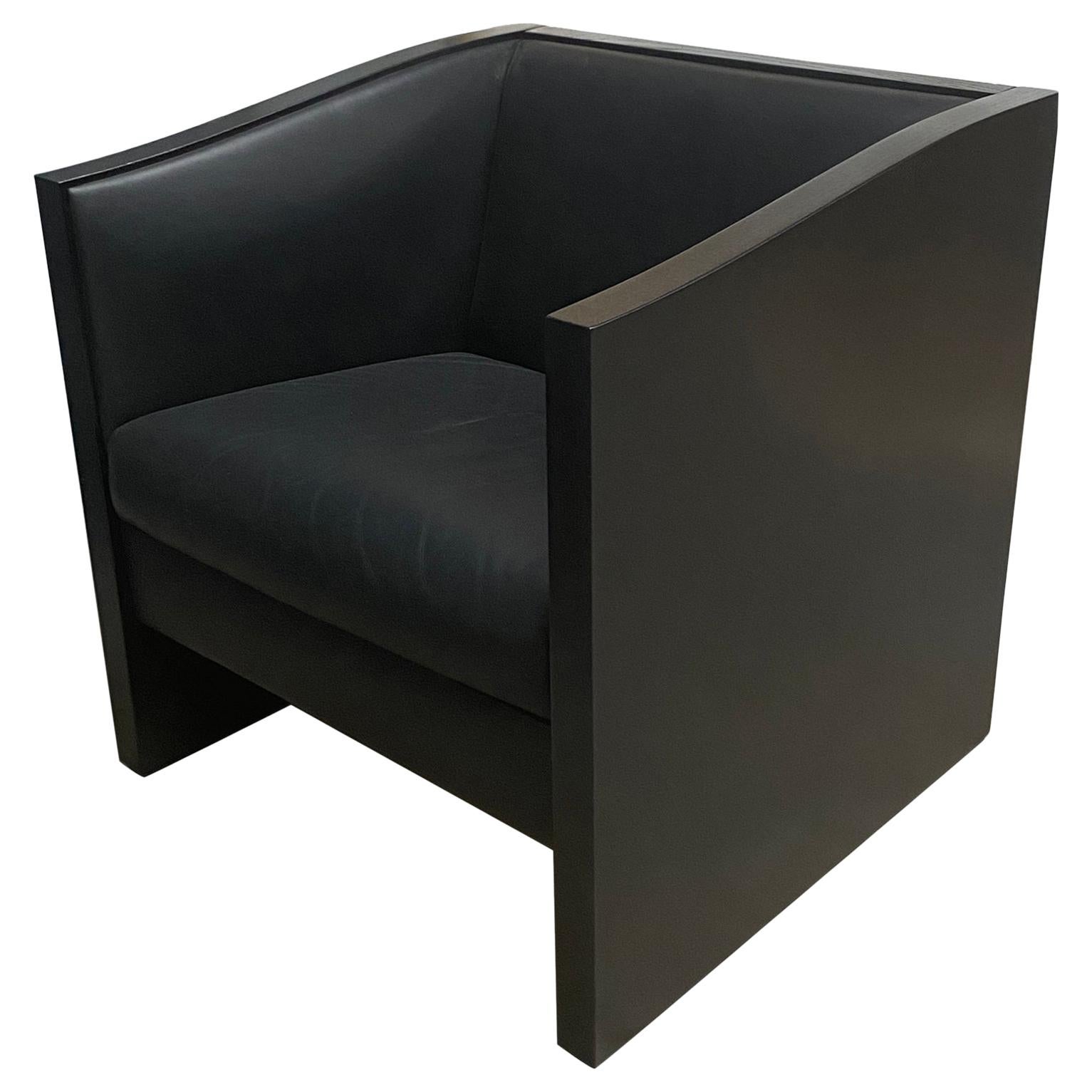 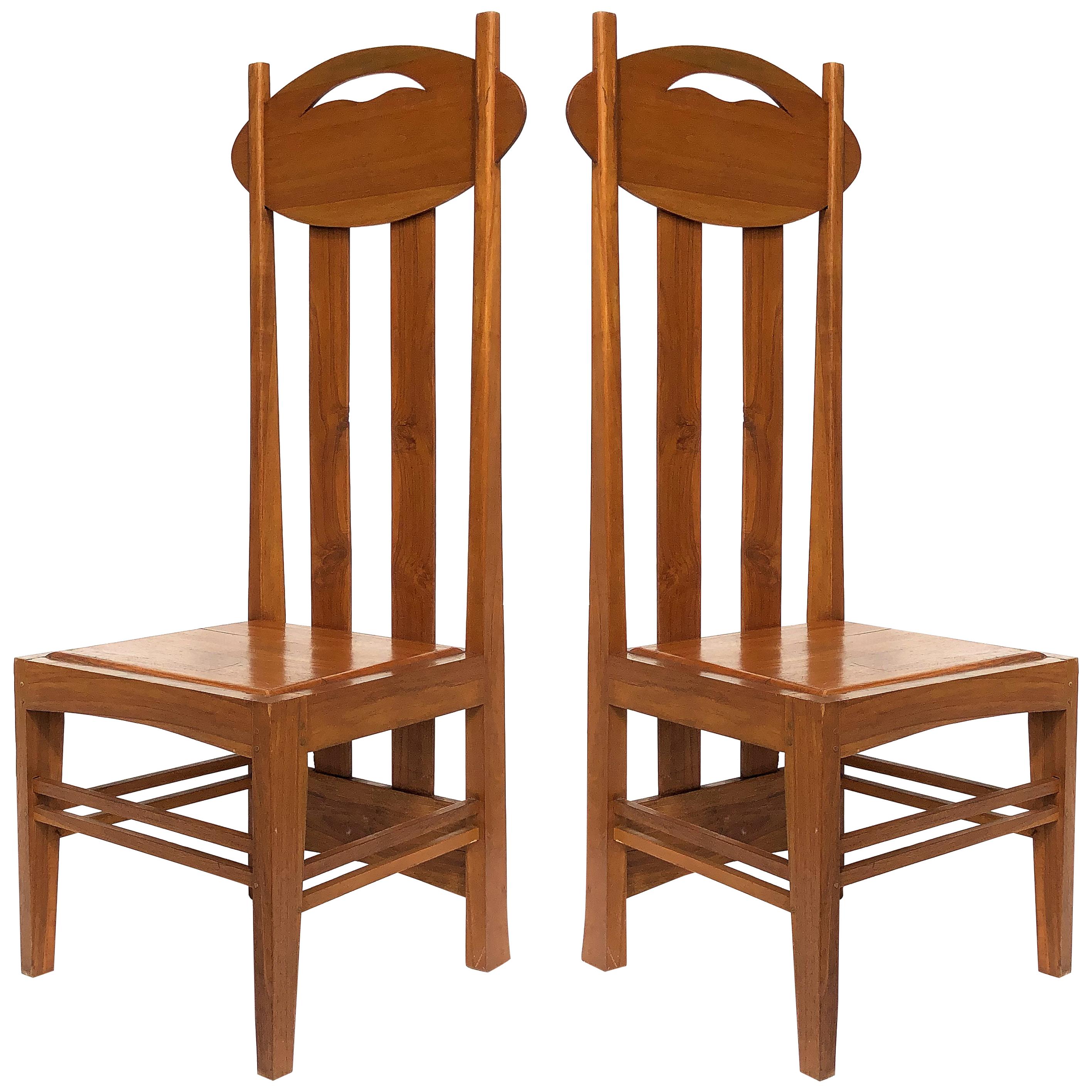 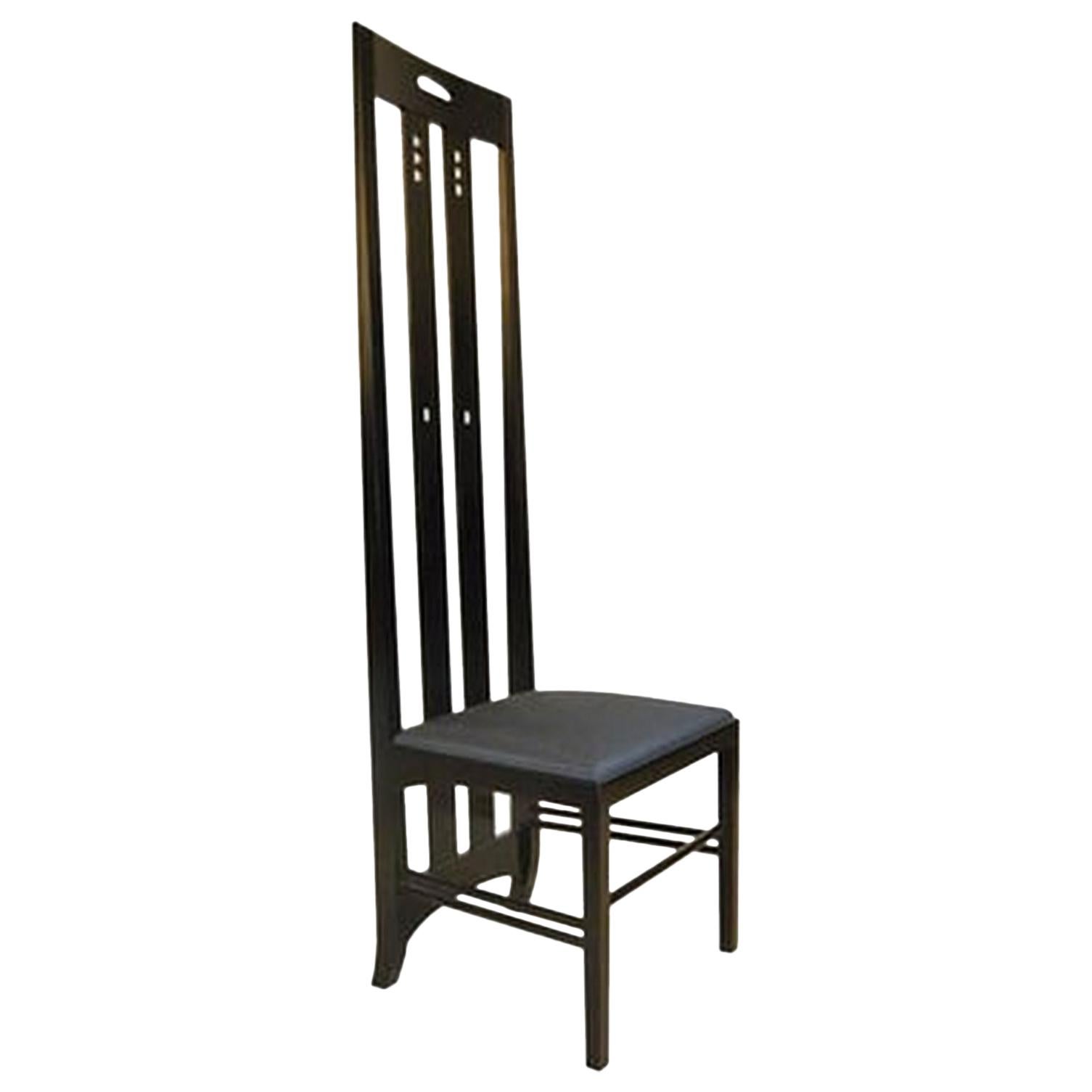 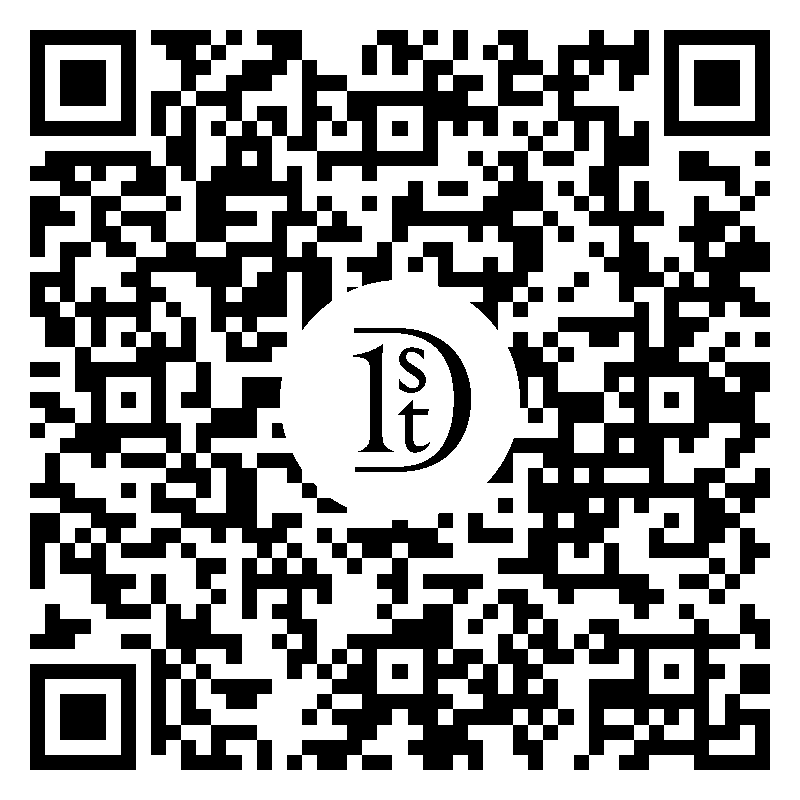 Pair of authentic Cassina production Hill House 1 chairs by Scottish designer Charles Rennie Mackintosh with original green velvet upholstery circa 1980s. The wood frame is original black-stain ash wood and shows wear. This iconic chair reflects Charles Rennie Mackintosh’s style and his fearless approach to the most challenging manufacturing processes. Originally a furnishing accessory for one of Mackintosh’s major design projects, Hill House in Helensburgh, near Glasgow, Scotland, from which its name derives. The linear, geometric form is evocative of the minimal, abstract lines of Japanese graphics, which confer symbolic and figurative symbolic value to the piece’s striking visual impact. This piece is seen by many critics as not only a chair but also a veritable treatise on the way space can be articulated. The tall back is defined by a succession of vertical lines that are topped with a grid of verticals and horizontals. Thanks to the mastery of the furnitire makers of Meda, in the Brianza area north of Milan, Cassina has re-issued the Hill House chair. 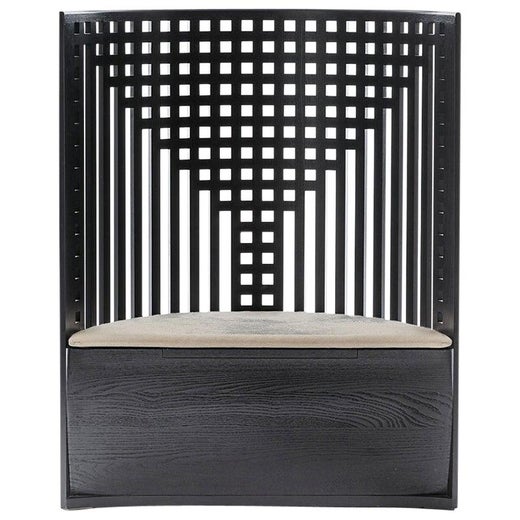 At the turn of the 20th century, the Scottish architect Charles Rennie Mackintosh created a singular, wholly original design style that was both lyrical and sleekly modern. Within his architectural schemes for schools, private homes and restaurants, Mackintosh — frequently working in collaboration with his wife, the artist Margaret Macdonald — invented an aesthetic that blends the organic flow of the Art Nouveau style and the honest simplicity of the English Arts & Crafts movement. Mackintosh was born into a working-class Glasgow family, the fourth of the 11 children of a police clerk and his wife. At age 15, Mackintosh began to take night classes at the Glasgow School of Art — where he would study until 1894 — and the following year started an apprenticeship with local architect John Hutchison. At the GSA, Mackintosh befriended Macdonald, her sister, Frances, and fellow architecture student Herbert McNair. Together they formed a graphic design team known as the Four, and were admired for their illustrations featuring sinuous botanical forms and sylph-like women. Around the same time, Mackintosh was hired by the architectural firm Honeyman and Keppie. where he drafted the company’s winning design for a new GSA building. The structure, with its brooding, asymmetrical facade punctuated by soaring studio windows, would be his architectural masterwork. By 1900, Mackintosh was designing houses and began the interiors for a group of Glasgow tea parlors in which he and Macdonald would produce some of the most alluring, lushly graphic decors of the era. Mackintosh’s work became widely influential on the continent, particularly among Josef Hoffmann, Koloman Moser and other member of the Vienna Secession movement. His work on private homes and tearooms generated the furniture designs for which Mackintosh is best known today. These include the Hill House chair, with its latticed back; the Argyle Street Tea Room chair, which features an oval head rail with a cutout that resembles a bird in flight; and several others — all instantly recognizable for their stunning tall backs. Mackintosh’s furniture works well in both traditional and modern interiors, though by virtue of both its familiarity and striking lines it tends to stand out. Because he was much more esteemed in Europe than in Britain, relatively few antique Mackintosh works survive, and those that have are museum pieces. Recently produced examples of his designs are widely available — notably, the Italian firm Cassina has been making fine Mackintosh pieces since the early 1970s. As you will see on these pages, the furniture of Charles Rennie Mackintosh is ever intriguing and engaging. His work is a historical touchstone that would be welcome in the home of any modern design aficionado.
About the Seller
4.9 / 5
Located in Miami, FL
Platinum Seller
These expertly vetted sellers are 1stDibs' most experienced sellers and are rated highest by our customers.
Established in 2019
1stDibs seller since 2020
55 sales on 1stDibs
Typical response time: <1 hour
More From This Seller