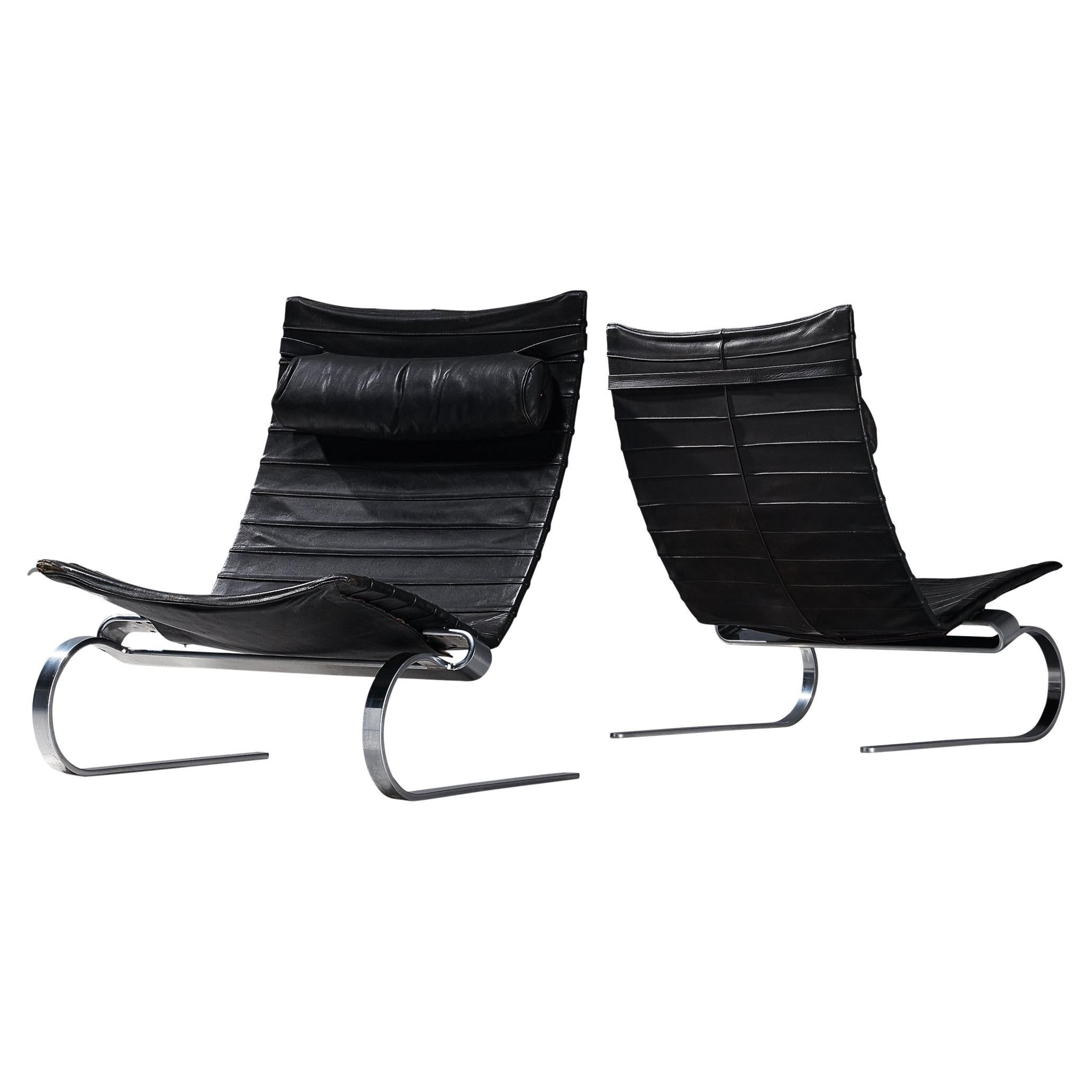 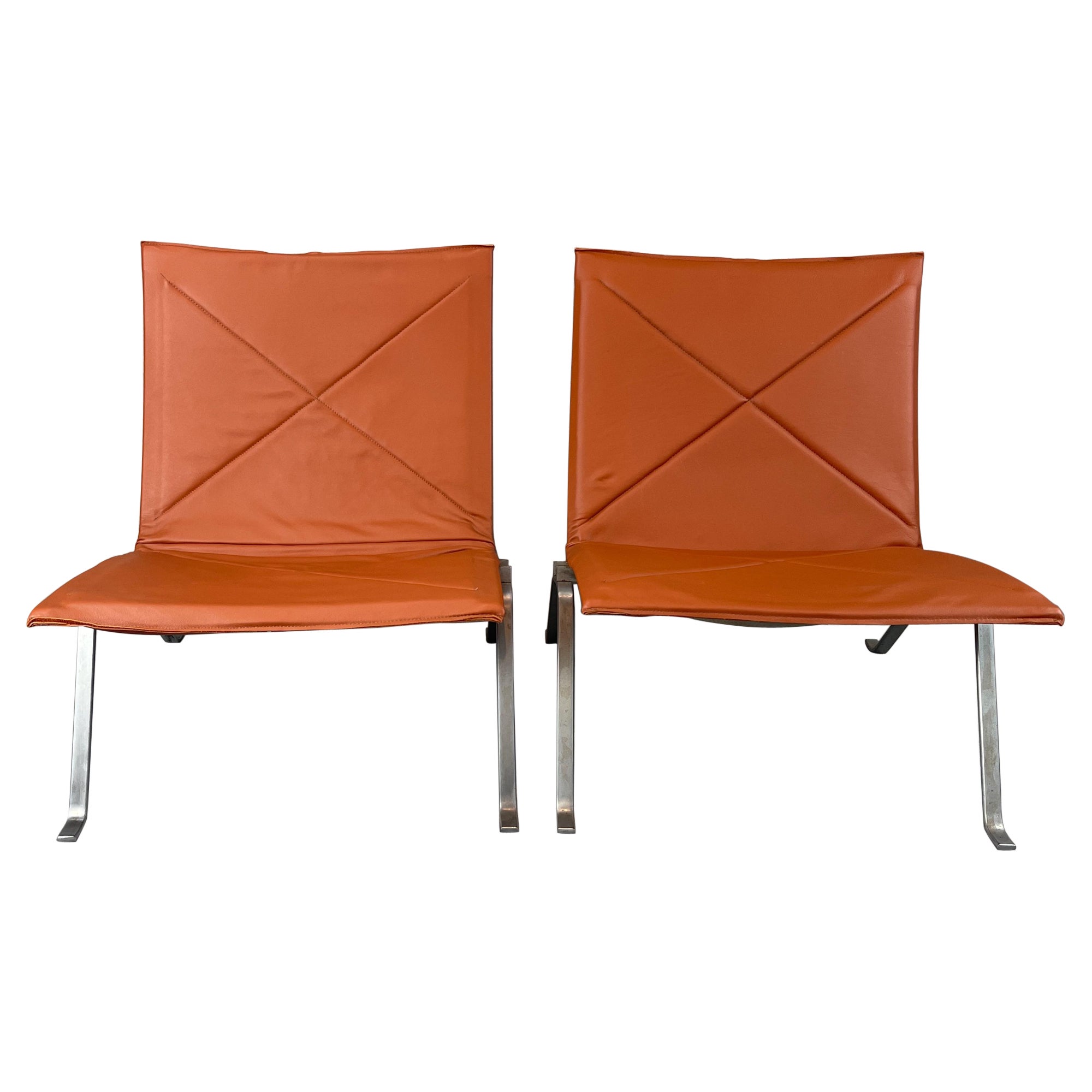 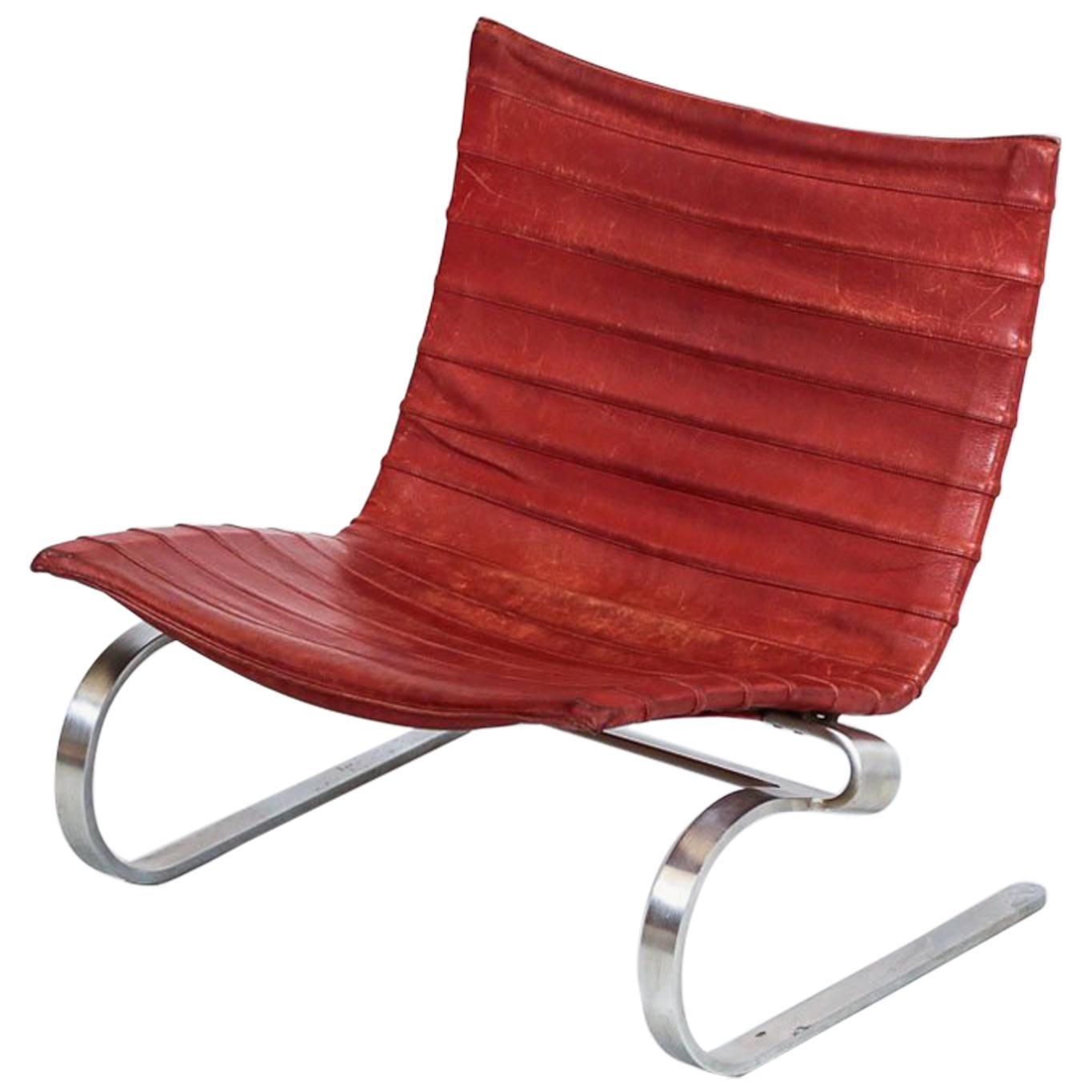 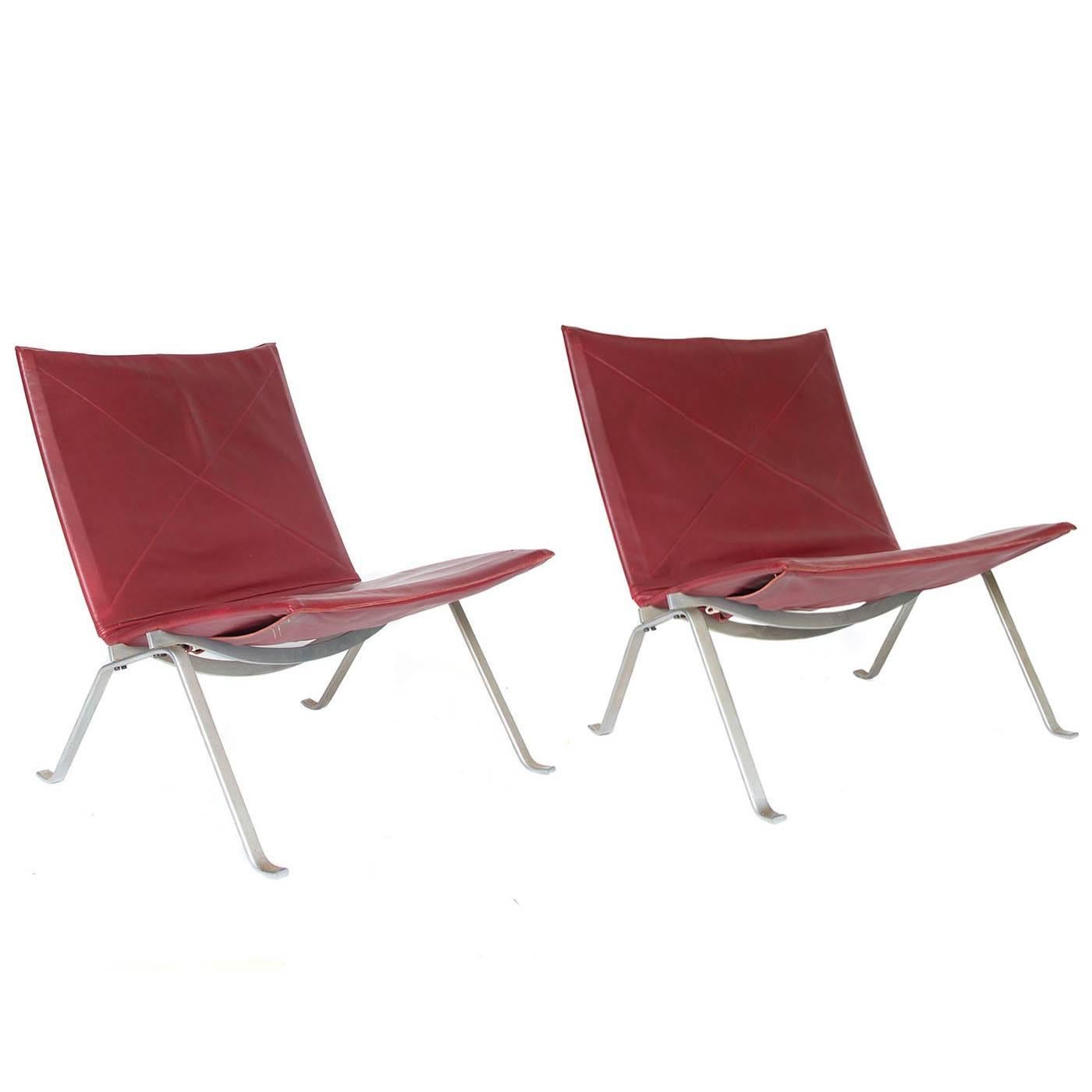 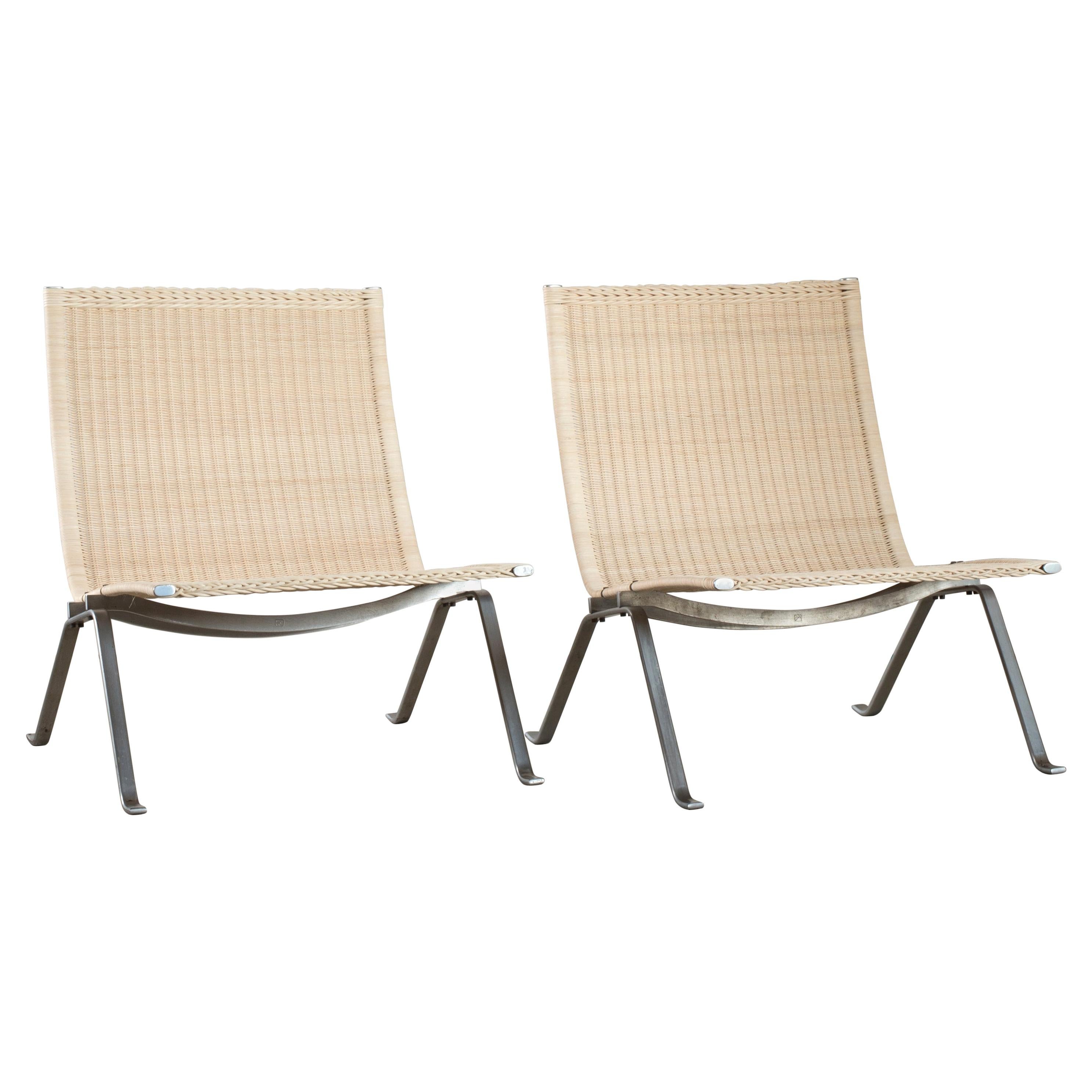 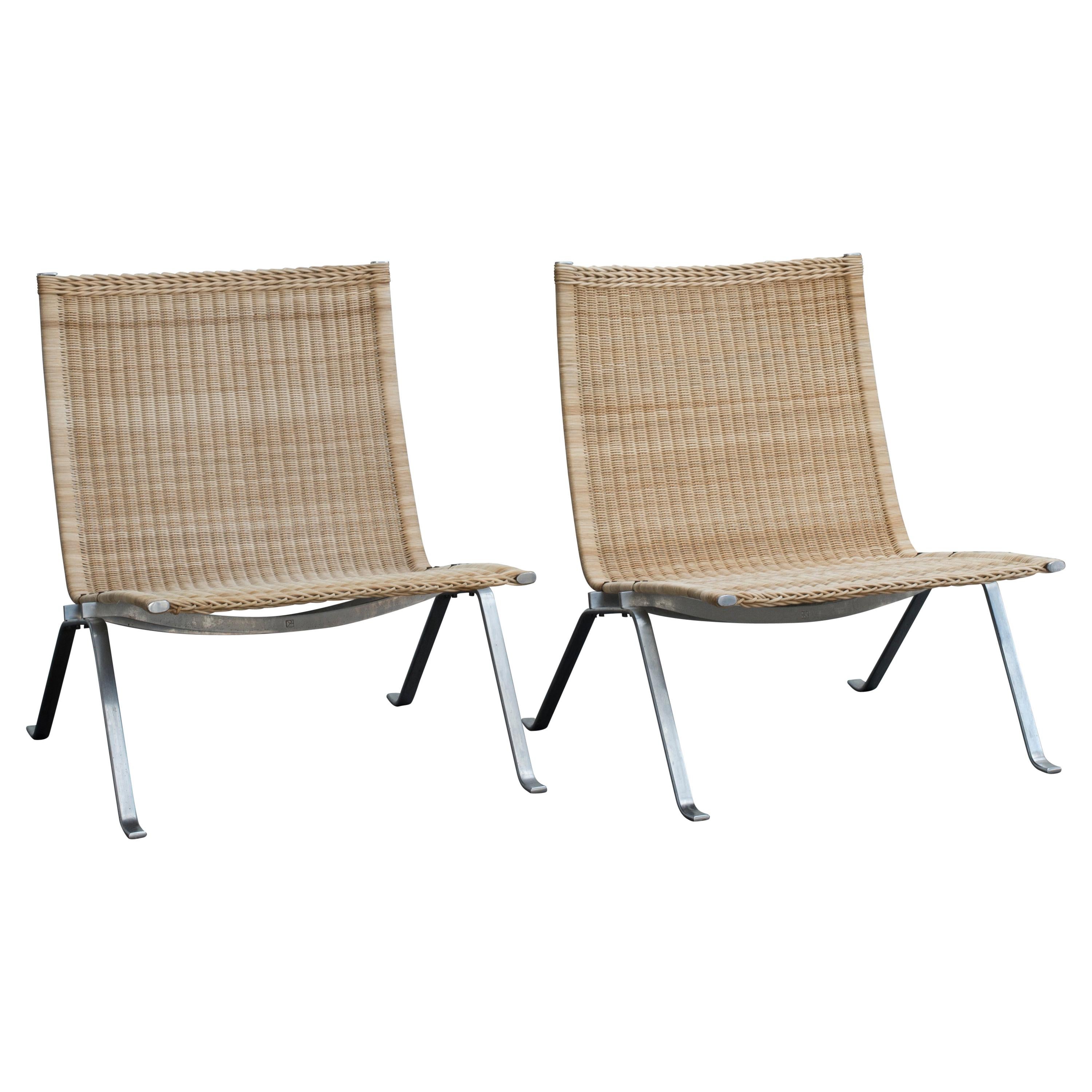 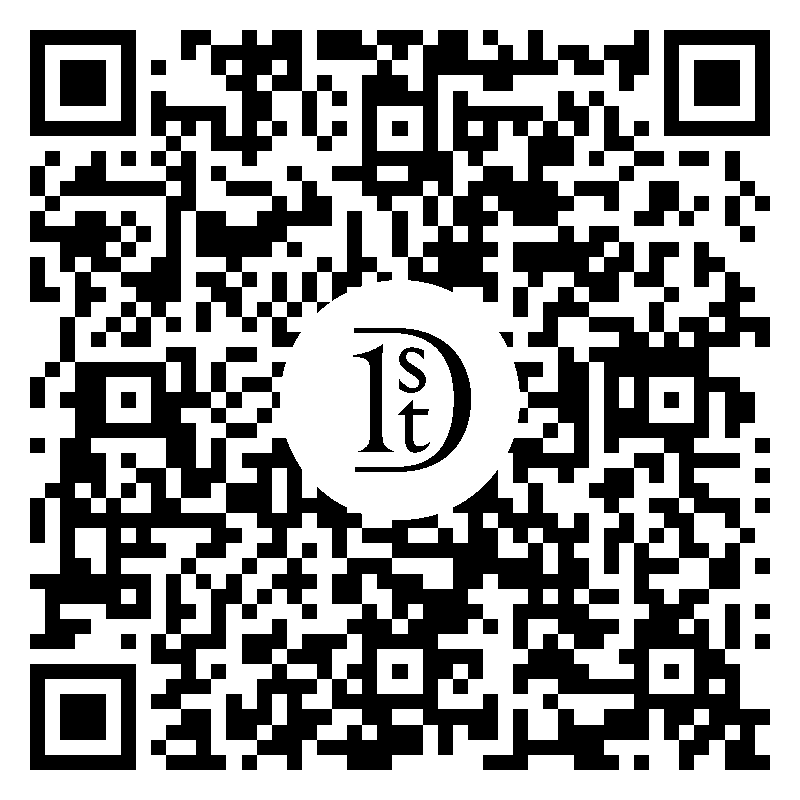 PK 20 is a laidback and elegant lounge chair, built upon a flexible matte chromed spring steel frame. The beautiful curve of the legs and the floating frame distinguish this chair. Original leather, matte chromed-plated steel frame. Signed with impressed manufacturer’s mark on each chair. PK 20 is part of the permanent collection at the Victoria and Albert Museum in London. Literature: The furniture of Poul Kjærholm: Catalogue Raisonne´, Sheridan, pg. 146-149. Danish chairs, Noritsugu Oda, pg. 188-189.

Designed by Poul Kjærholm
The PK20 is everything a lounge chair should be: It is as comfortable as it is stylish, and its sleek form renders it a versatile addition to almost any room. The chair’s gently curved, high-back leather-covered seat rests on a flexible, matte chromed spring steel frame. Designed by Danish furniture maker Poul Kjærholm (1929–80) for E. Kold Christensen in 1968, the PK20’s clean lines represent the ideals of minimalist modern furniture, while its adjustable headrest and scoop seat plainly signal that this piece was built for comfort.Although the Østervrå-born Kjærholm was trained as a cabinetmaker, he admired the enduring nature of metal and enjoyed working with lightweight steel over the traditional woods that his peers preferred. Indeed, Kjærholm’s acclaimed designs are distinct from those of his Danish contemporaries such as Hans Wegner. He lauded steel for its “constructive potential” and recognized its “artistic merit,” while a rich balance emerged in his furniture’s modest melds of the alloy and natural materials like halyard rope or wicker. Similar to his well-known PK22 chair, the exposed metalwork of Kjærholm’s sculptural PK20 is tempered by the inviting organic warmth of the seat’s leather upholstery. For decades, Kjærholm designed numerous celebrated chairs, tables and more, and Danish manufacturer Fritz Hansen acquired the rights to the complete collection of his work in 2014. A milestone of material innovation in modern Danish furniture design, the PK20 lounge chair is part of the permanent collection at London’s Victoria and Albert Museum and is available today in leather upholstery as well as in a pale gold wicker version. 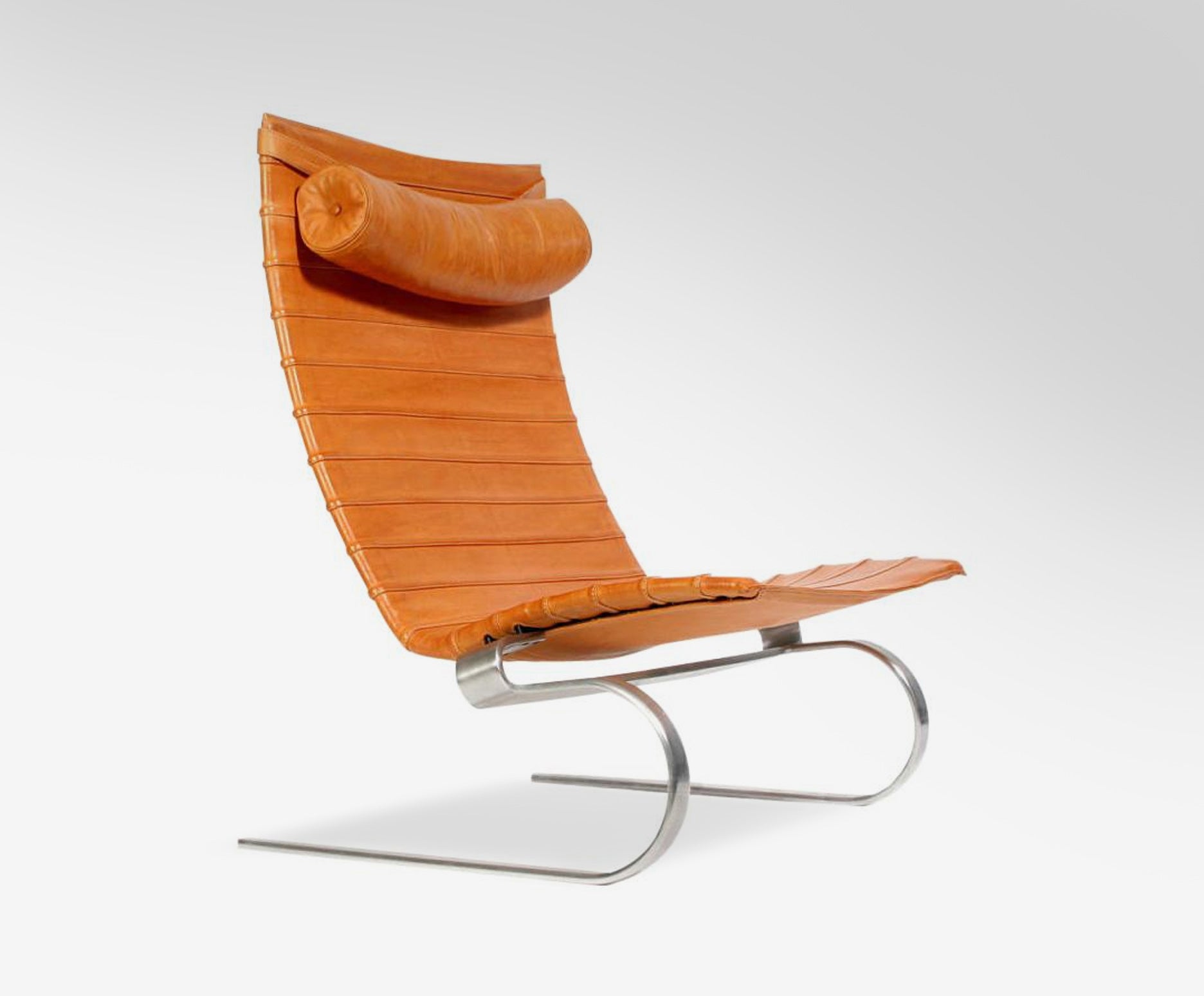 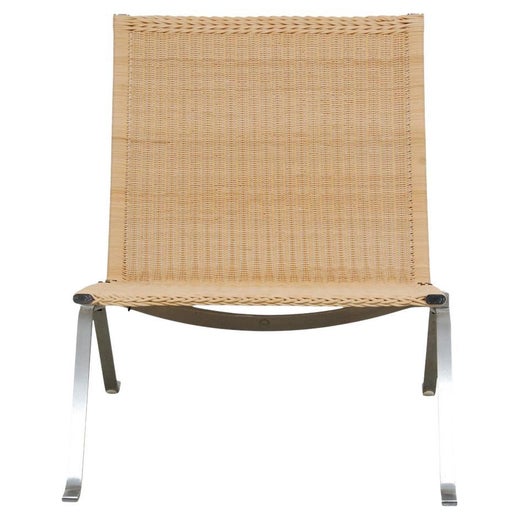 At what is now the Royal Danish Academy of Fine Arts in Copenhagen, Kjærholm studied under Hans Wegner and Jørn Utzon — an industrial designer and the architect of the celebrated Sydney Opera House. The latter greatly influenced Kjærholm’s furniture production techniques — although he employed natural materials such as cane and leather, to a far greater extent than his peers Kjærholm embraced the use of steel (rather than wood) framing for his chairs, daybeds and tables.

Kjærholm’s signal design was the PK22 chair of 1956, a low-slung leather lounger on a steel base. The ideas introduced in the PK22 — Kjærholm’s designs were named using a numeric system devised with his manufacturer, E. Kold Christensen — were refined throughout his career, as the offerings below show: the PK11 chair of 1957, with back and armrests formed by a semicircle of ash; the capacious, richly patinated leather seat of a vintage 1961 PK9 chair; the elegant rattan swoop of the PK 24 chaise longue (1965). The chaise longue's leather headrest, held in place by a steel counterweight, best shows Kjærholm's particular gift for combining technological advancements with a respect for traditional detailing.

While respectful of the past, Poul Kjærholm's sensibility is one of optimism and expectation. His was design for those who lived with verve and élan, and confidently anticipated the future.

Find a collection of vintage Poul Kjærholm furniture on 1stDibs.

1stDibs Buyer Protection Guaranteed
If your item arrives not as described, we’ll work with you and the seller to make it right. Learn More
About the Seller
4.8
Located in Amsterdam, Netherlands
Gold Seller
These expertly vetted sellers are highly rated and consistently exceed customer expectations.
Established in 2006
1stDibs seller since 2012
263 sales on 1stDibs
Typical response time: <1 hour
More From This SellerView All
People Also Browsed
You May Also Like