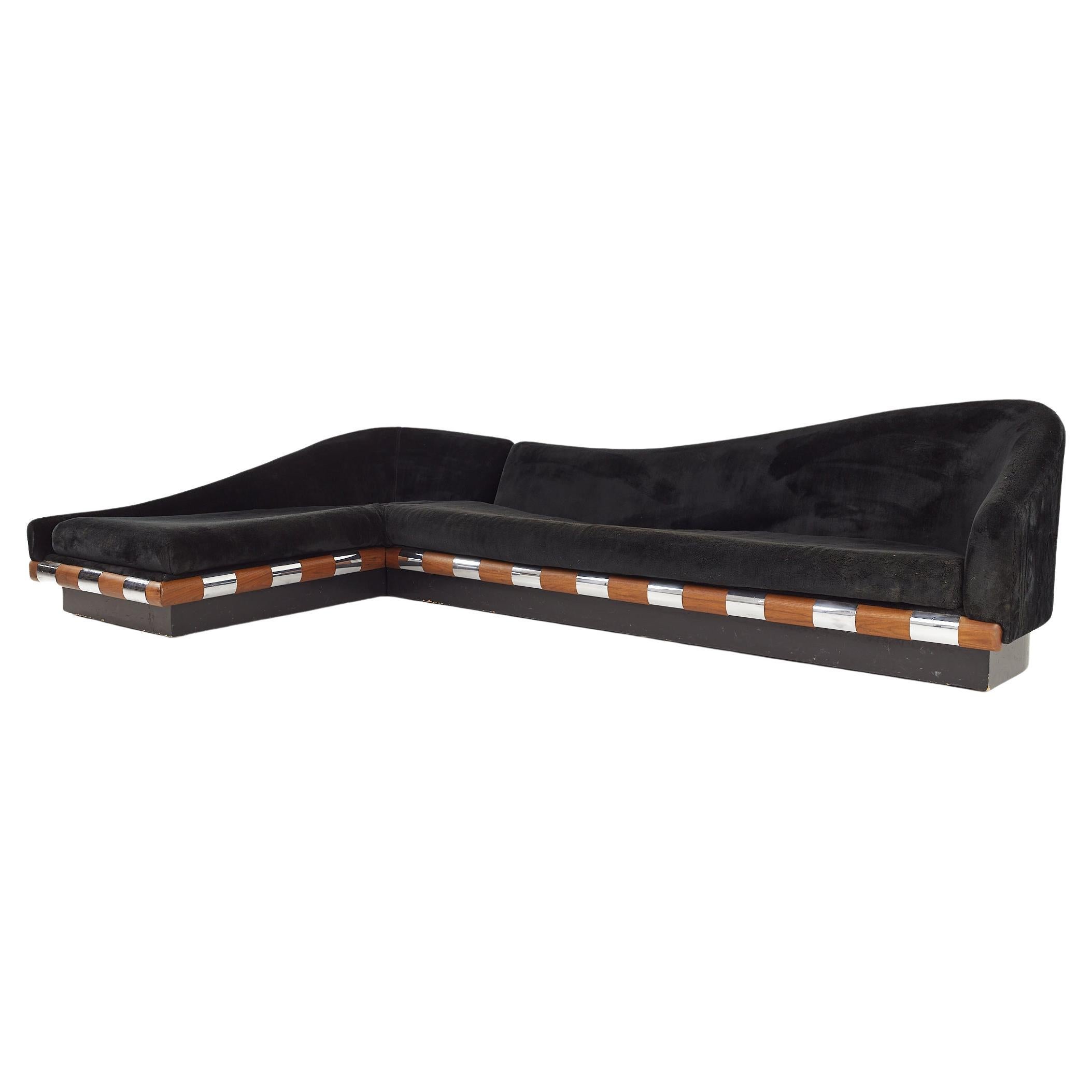 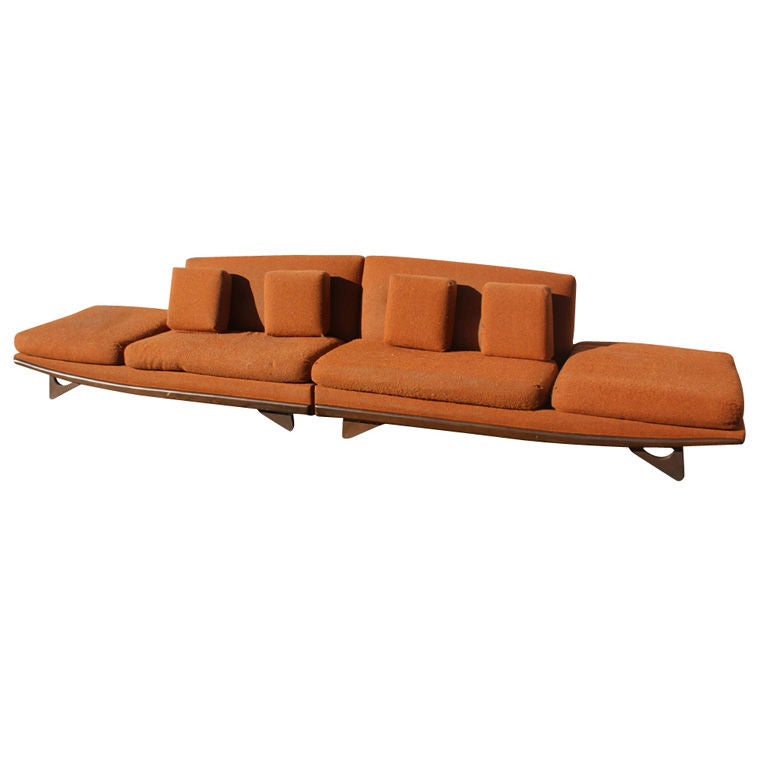 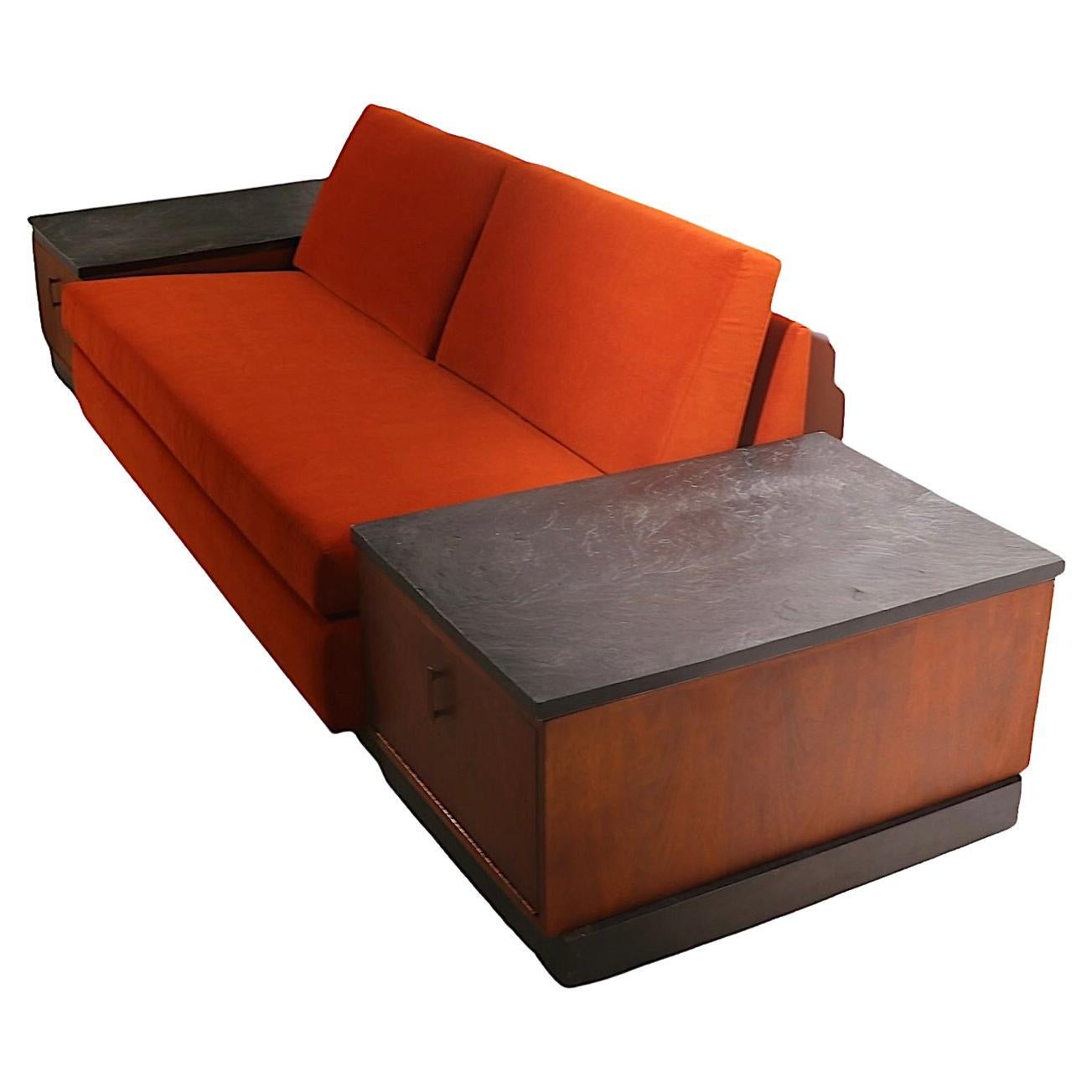 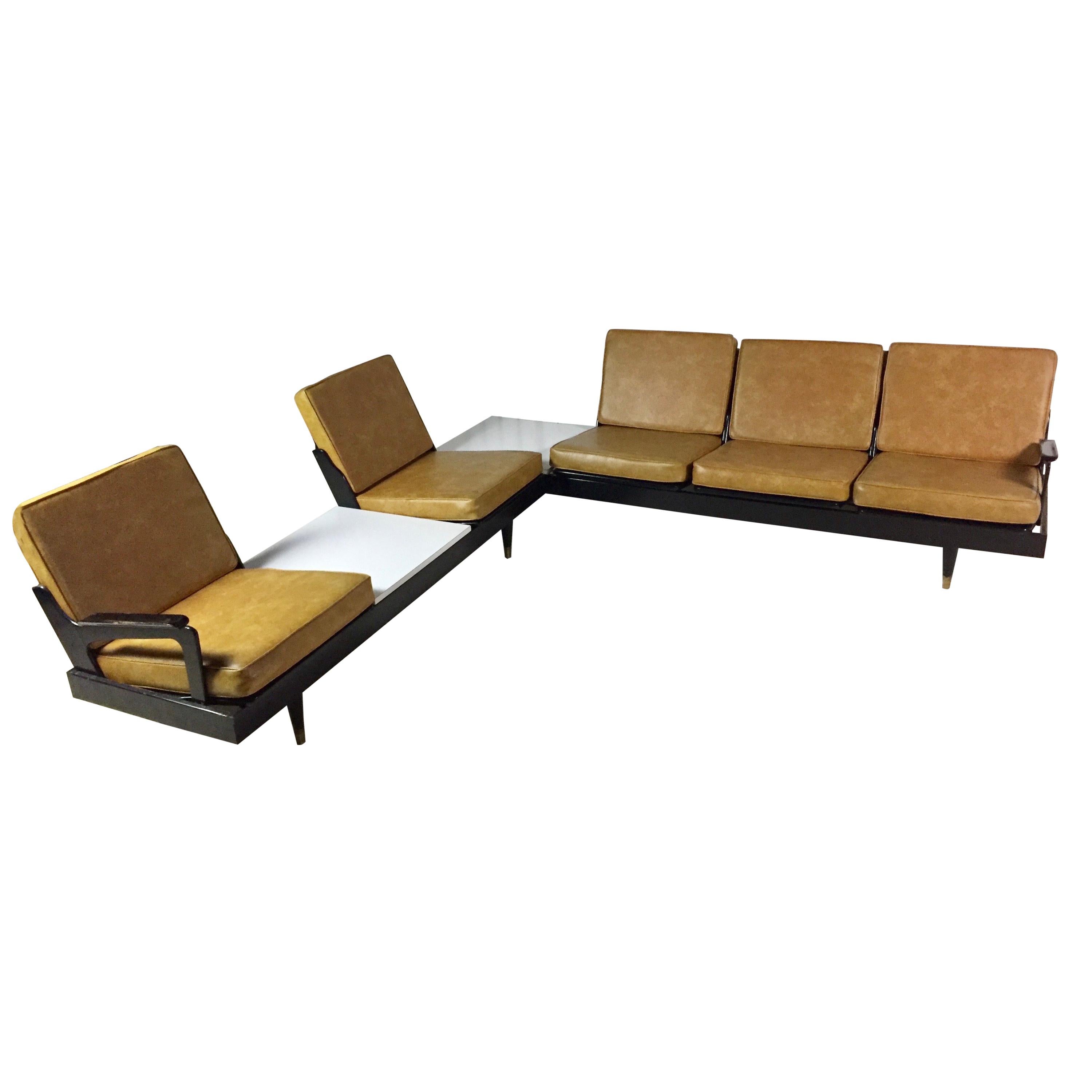 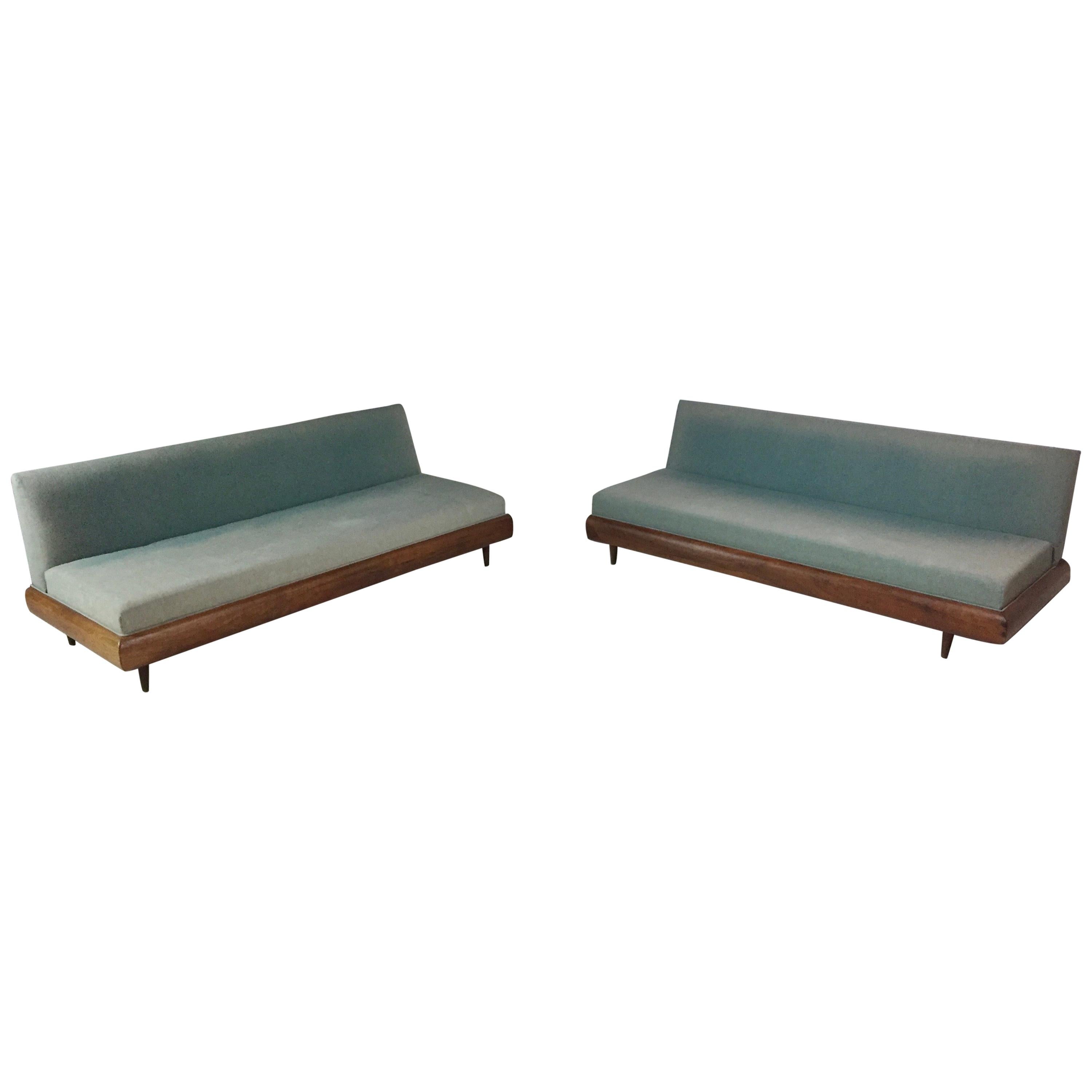 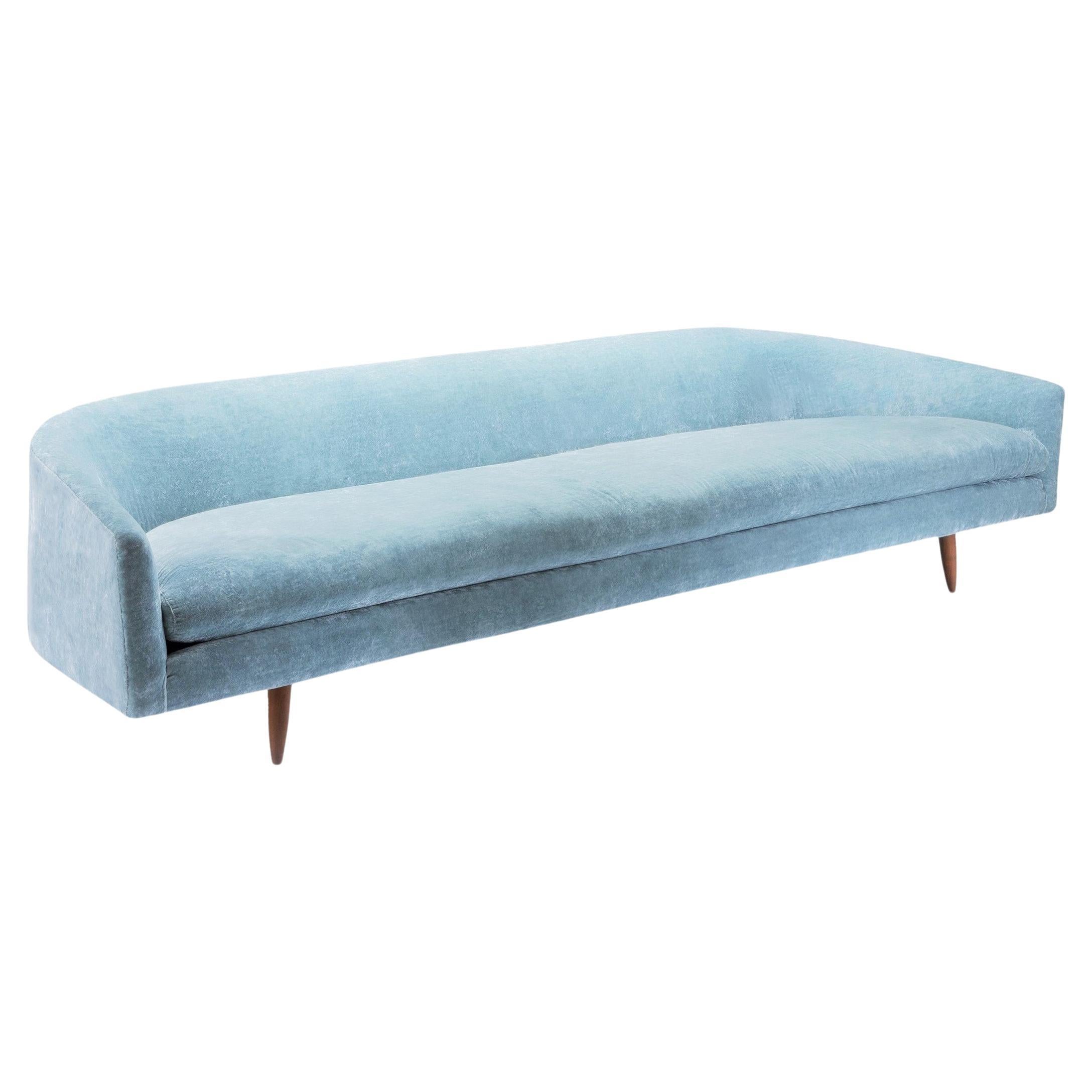 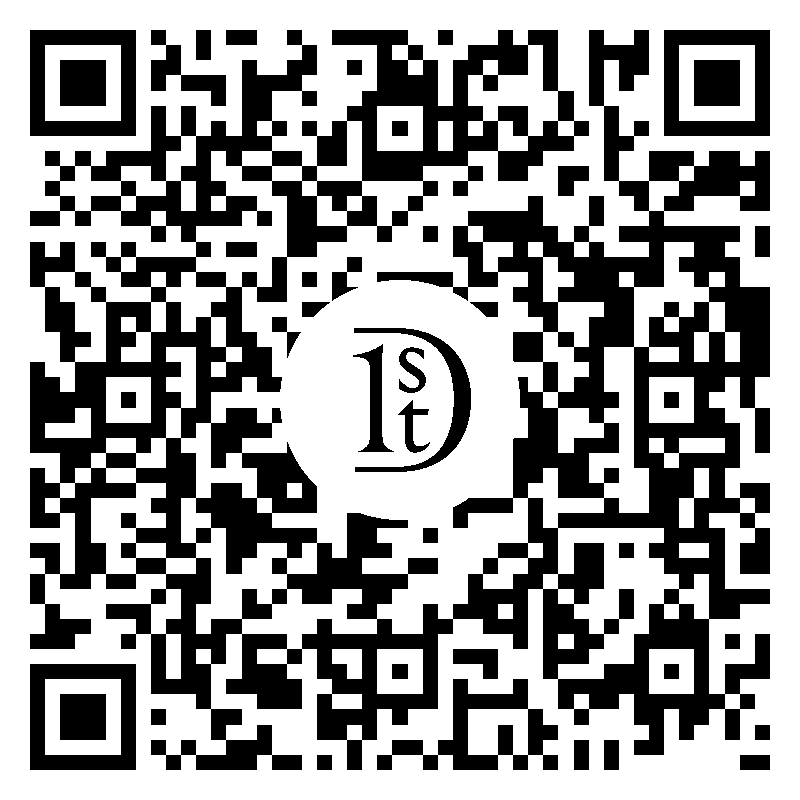 This rare and sought-after 'Cloud' Mid-Century Modern sofa is by Adrian Pearsall for Craft Associates in circa 1960. This amazing collectors piece is being offered as a pre-restoration special. Currently it is in its original fabric and is missing the wood table that fits into the back open-curve area. We are planning to have the table remade and the sofa reupholstered. The price once completed will of course be much higher. However we decided to offer it first to allow you to decide what fabric to have it reupholstered in or it can be used with its current soft furry fabric. This is a great opportunity to purchase this rare collectors piece at a low price and either use it as-is or have it reupholstered. We can reupholster it for you or you can use your local upholsterer. Consider using this serpentine / cloud sofa in a conversation pit area, a den, living room or lobby. Ideal for residential or commercial spaces. Perfect for Mid-Century Modern but also works great with Contemporary, Traditional, Post-Modern, Scandinavian Modern, Brazilian Modern or Hollywood Regency interiors. MEASUREMENTS: Height: 21.25" Width: 129.5" Depth: 51" Seat Height: 15.75" CONDITION: The fabric is in good vintage condition with light to moderate age and wear. We recommend reupholstery because these sofas are stunning and rare, however you can use as-is if desired. The wood table which is missing can be recreated upon request.

Designed by Adrian Pearsall
The early days of Craft Associates— the furniture company founded in 1952 by Adrian Pearsall (1925–2011) — took shape in his mother-in-law’s duplex. There, the American architect and designer would build pieces while his wife, Dorie, would manage purchase orders and invoices. Even if the Pennsylvania-based operation was at first limited to the confines of an apartment, the company afforded Pearsall the opportunity to bring to life his residential furniture designs, such as his revered low-profile Cloud sofa, one of the contributions to mid-century modern furniture design for which Pearsall is recognized today and among the initial concepts for the now-legendary furniture company he founded. Pearsall studied architectural engineering at the University of Illinois and graduated in 1950. With the founding of his Craft Associates two years later, he helped usher in the Atomic Age of design, and his work, making use of natural materials and conceived with comfort in mind, was widely appealing to a postwar American consumer base. Pearsall frequently used geometric and often flamboyant shapes in his furniture, and the bold concepts were greatly influenced by prominent furniture makers of the era, such as Vladimir Kagan, George Nakashima and Florence Knoll. Innovative, revolutionary ideas aside — Pearsall also invented the bean bag chair — the maker’s great success lay in his ability to move his flashy designs directly into the mass market, and it wasn’t long before Craft began selling its pieces to department stores in Philadelphia and New York, including Wanamaker’s and Macy’s. Circa early 1950s, the Cloud sofa’s walnut legs and sinuous shape blended subtle flair with comfort, and its original gently swerving back became a Pearsall signature. These attributes, the permanent back of his sofa and its solid walnut base, are widely known components of his designs from the era as well as through the 1960s. Later, Pearsall integrated the Cloud sofa’s swerving back into his lounge chairs — which featured a similarly long and low gondola silhouette — and used modern fabrics in rich color combinations that boldly embraced the Atomic Age. Today, Pearsall’s designs are licensed to Restoration Hardware. 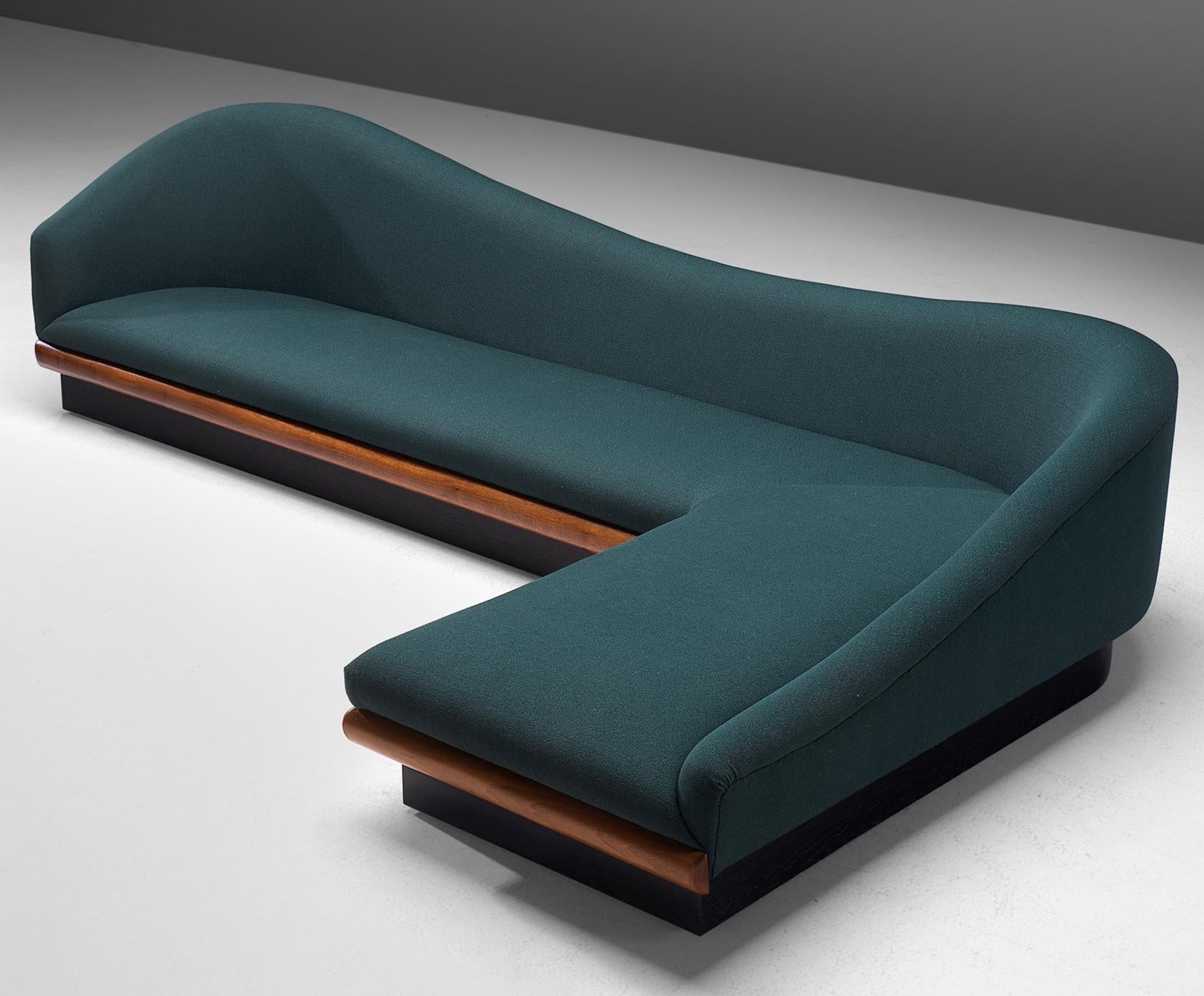 Shop The Cloud Sofa
About the Seller
5.0
Located in Los Angeles, CA

Recognized Seller
These prestigious sellers are industry leaders and represent the highest echelon for item quality and design.
Diamond Seller
These expertly vetted sellers are 1stDibs' most experienced sellers and are rated highest by our customers.
Established in 2012
1stDibs seller since 2015
1,766 sales on 1stDibs
Typical response time: 1 hour
Associations
20th Century Specialists
More From This Seller