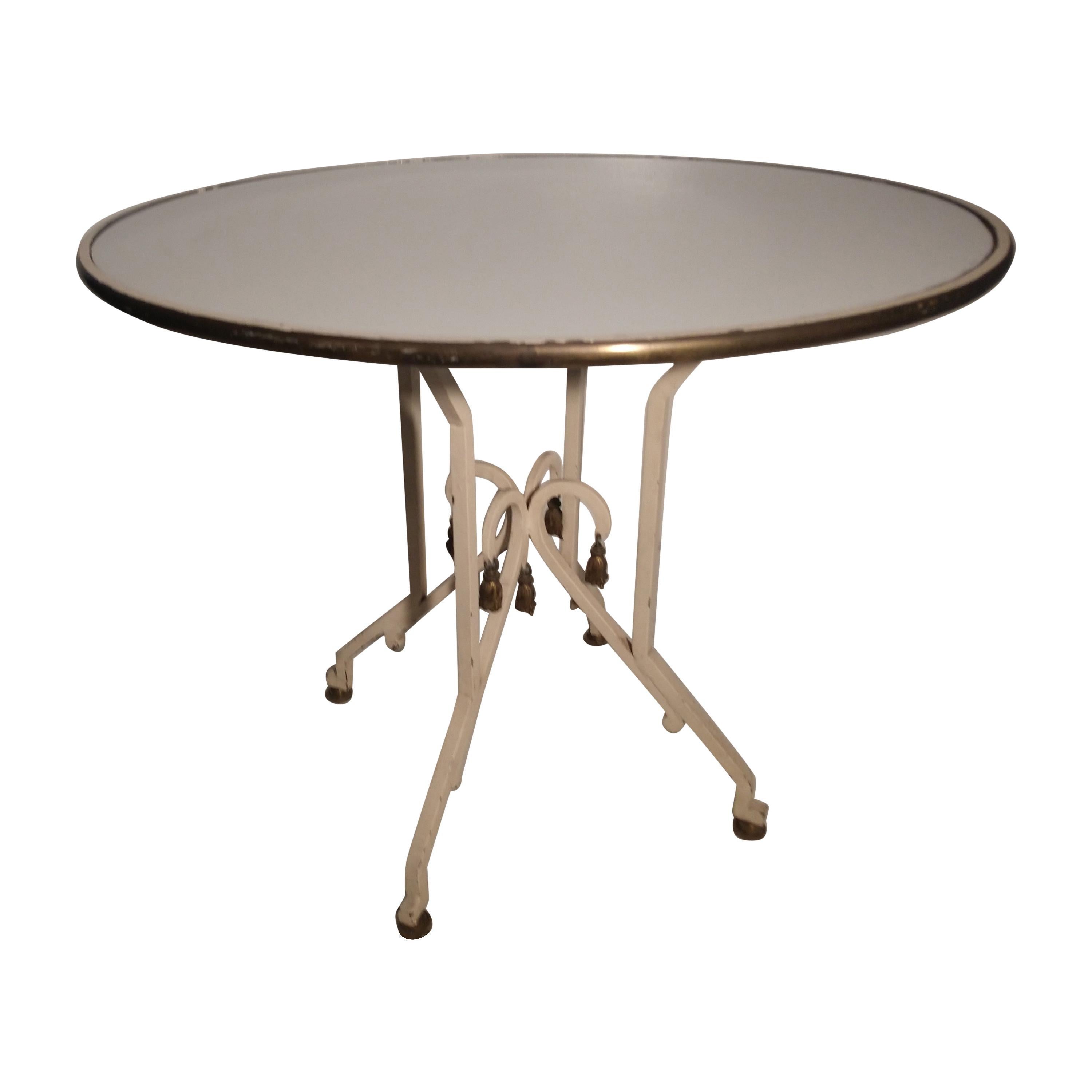 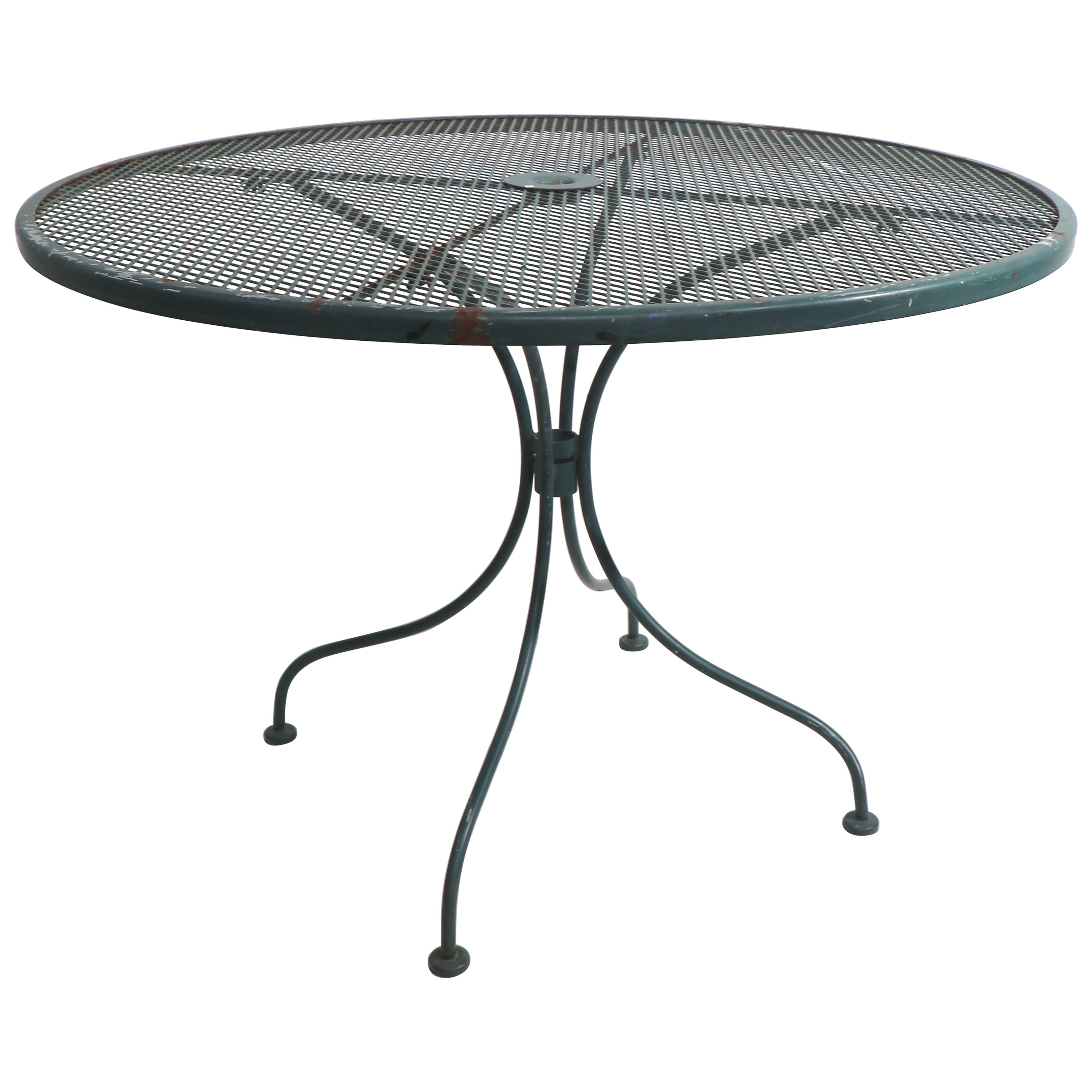 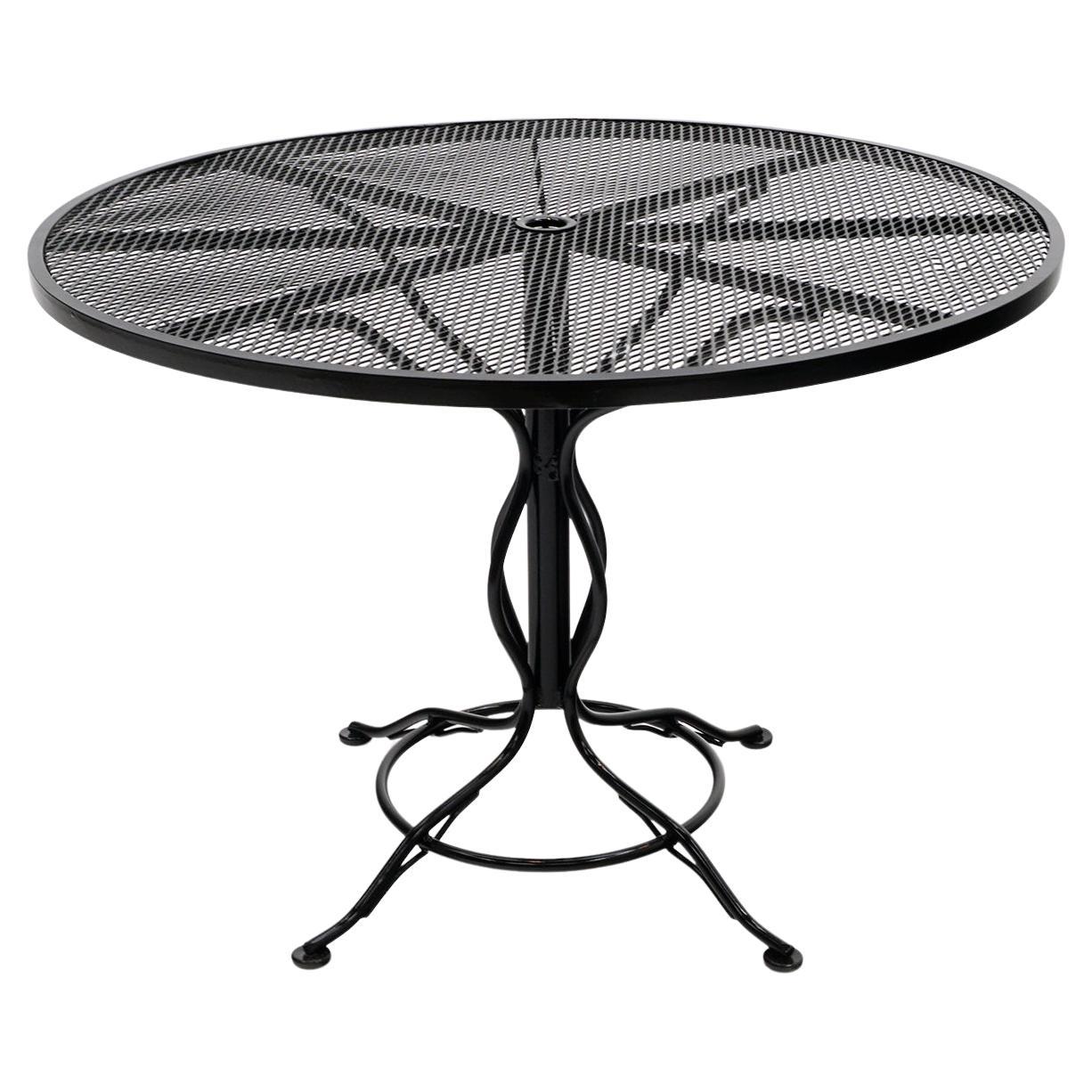 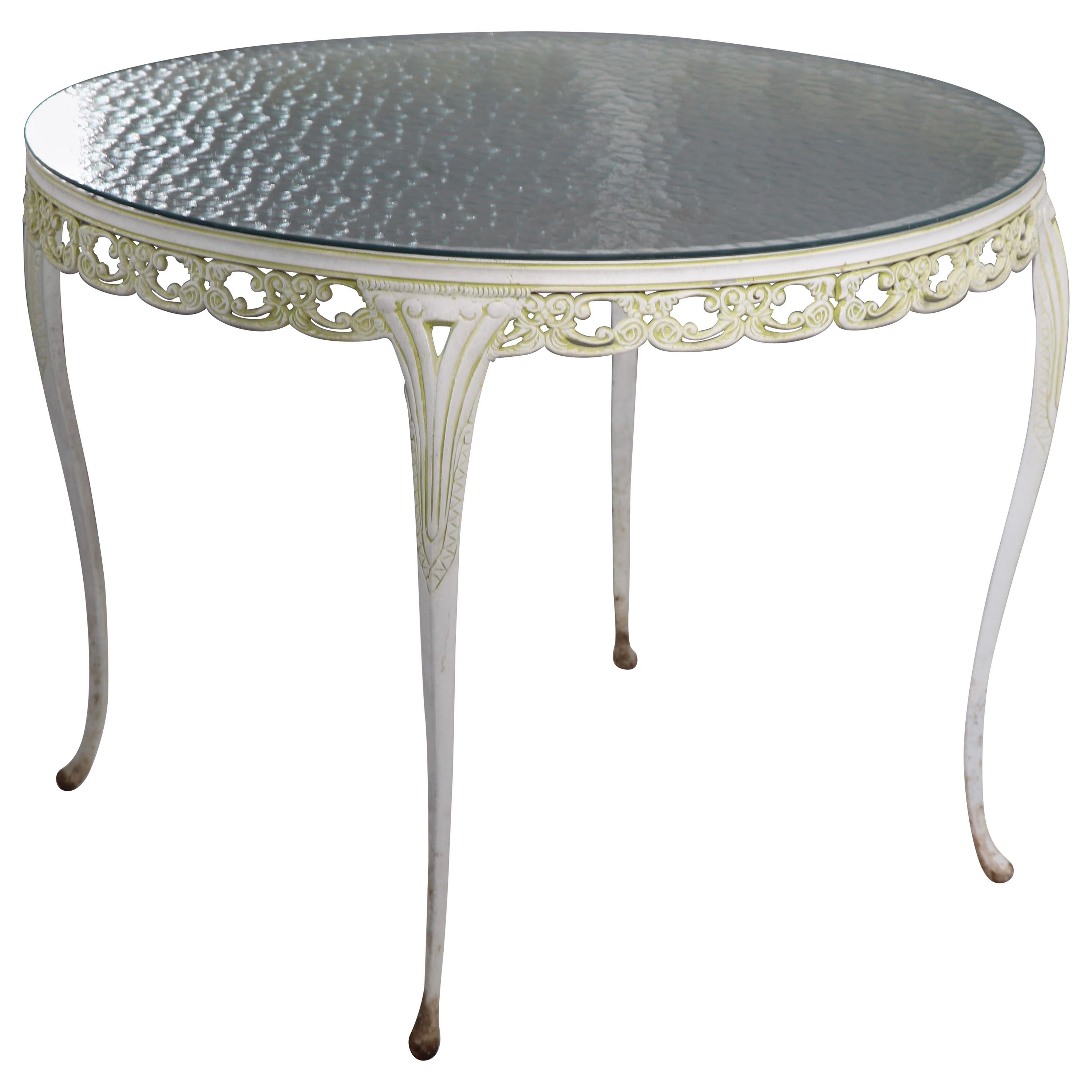 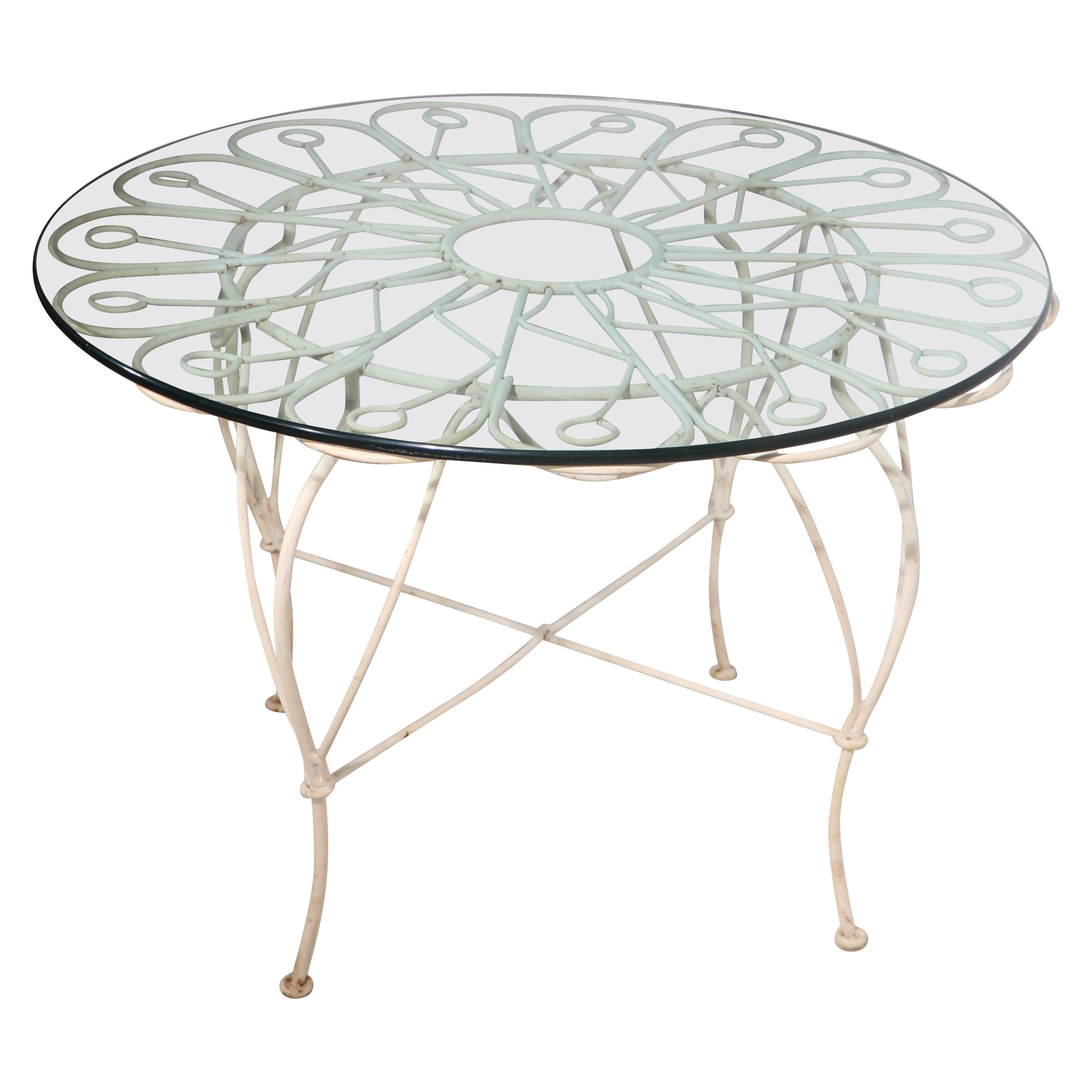 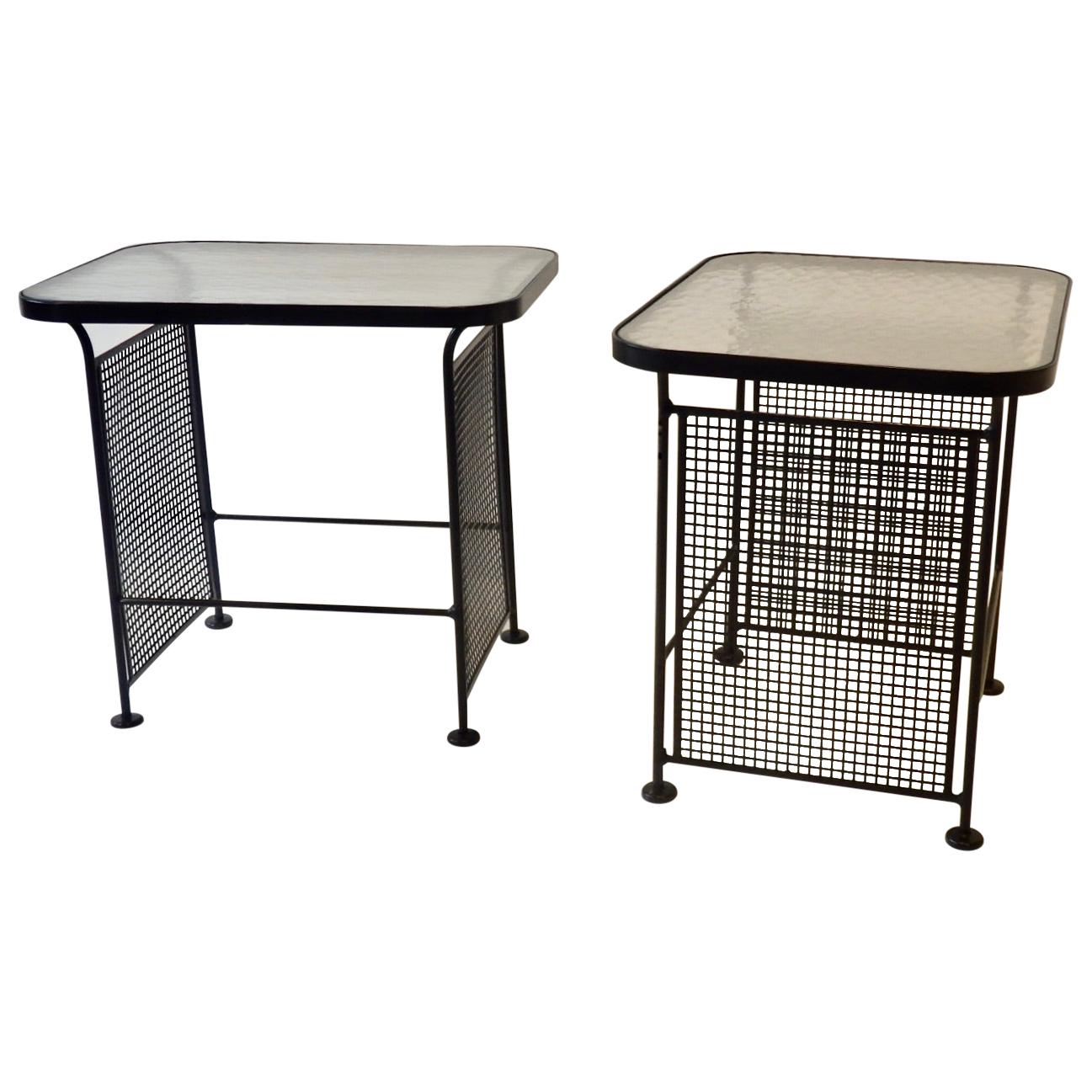 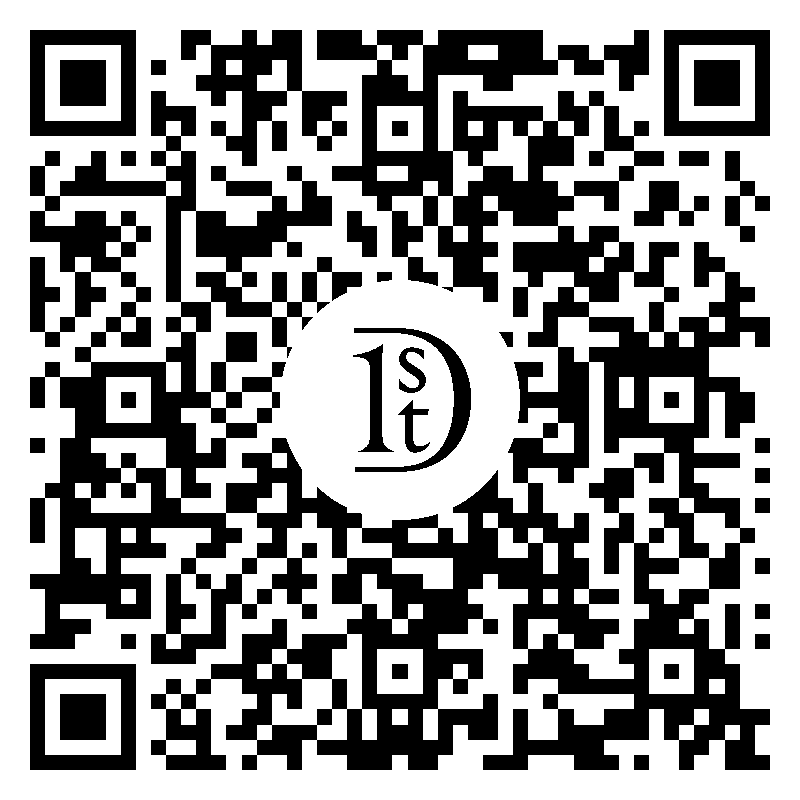 Not your typical Woodard octagonal dining table. This example has never been outside on a patio and retains the original finish and original white Vitrolite (milk glass) top. The glass fits perfectly within stops on top of the table frame. The construction of the base is such that the table top has multiple cross bars of support for the glass making it very durable and sturdy. There are light scratches to the glass seen on close inspection. The overall original condition of this table is shockingly good as it was only used indoors. The original enamel is a darker taupe / gray-beige. This is the only example we have seen of this original design in our 25 years in business. We also have a pair of Sculptura armchairs with the original finish and covers, also never outside. 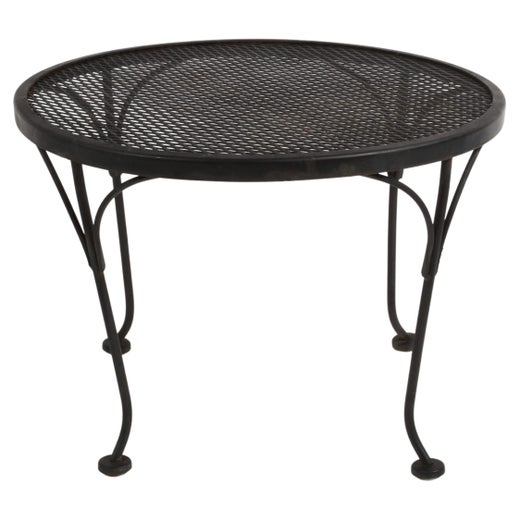 Woodard Furniture Company’s diverse offerings have included everything from pine caskets to premium patio furnishings over the years.

Lyman E. Woodward founded the family business Woodard Brothers (he dropped the second w for his venture’s name), later Woodard Furniture Co., in Owosso, Michigan, in 1866. Woodard Furniture produced wood furniture such as birch and oak bedroom pieces, window and door blinds and even pine caskets. Demand for the latter increased during the spread of the Spanish flu in America, and Woodard’s casket business — a new company called Owosso Casket Company — thrived, becoming the largest casket manufacturer in the world throughout the 1920s. Two U.S. presidents, William McKinley and Benjamin Harrison, were buried in Owosso caskets.

On the furniture side, Lyman’s son Lee Woodard spun off his own business as Lee L. Woodard and Sons, opening a shop with his sons, Joseph, Lyman II and Russell. During the 1930s, the new company explored the use of metal in furniture-making and introduced a wrought-iron set of patio dining furniture featuring ornate grillwork inspired by French design called Orleans in 1940. The line became a best seller and kick-started the company’s international reputation as a patio-furniture maker, even as the Woodard factory subsequently shifted toward supporting the wartime efforts in manufacturing parts for trucks and military equipment. After World War II, the business returned to making furniture.

Over the years, Woodard and Sons would go on to master metallurgy in furniture making, developing expertise in wrought iron, cast aluminum and tubular aluminum for both indoor and outdoor pieces. While the business started with more traditional styles of furnishings, the company would go on to embrace mid-century modernism. In fact, one of Woodard’s most famous pieces is 1956’s Sculptura chair, variously credited over the years to Russell and/or Joseph. The Sculptura was reportedly the first sculpted chair made without molds. Not unlike Harry Bertoia’s elegant steel-wire Side chair (also a mid-century darling) in its undulating form, the Sculptura chair, which is composed entirely of enameled woven wrought-iron wire, bears similarity to Eero Saarinen’s Womb chair and Charles and Ray Eames’s DAX chair. The beloved Woodard chair was added to the Cooper Hewitt Smithsonian Design Museum’s permanent collection in 1994.

While the Woodard business is no longer in family hands, the company continues to produce fine patio furniture today and even reintroduced the Sculptura chair in 2015 as nostalgia for mid-century modernism gained steam again.

About the Seller
5.0
Located in Kansas City, MO
Platinum Seller
These expertly vetted sellers are 1stDibs' most experienced sellers and are rated highest by our customers.
Established in 1998
1stDibs seller since 2014
498 sales on 1stDibs
Typical response time: 1 hour
More From This SellerView All
You May Also Like