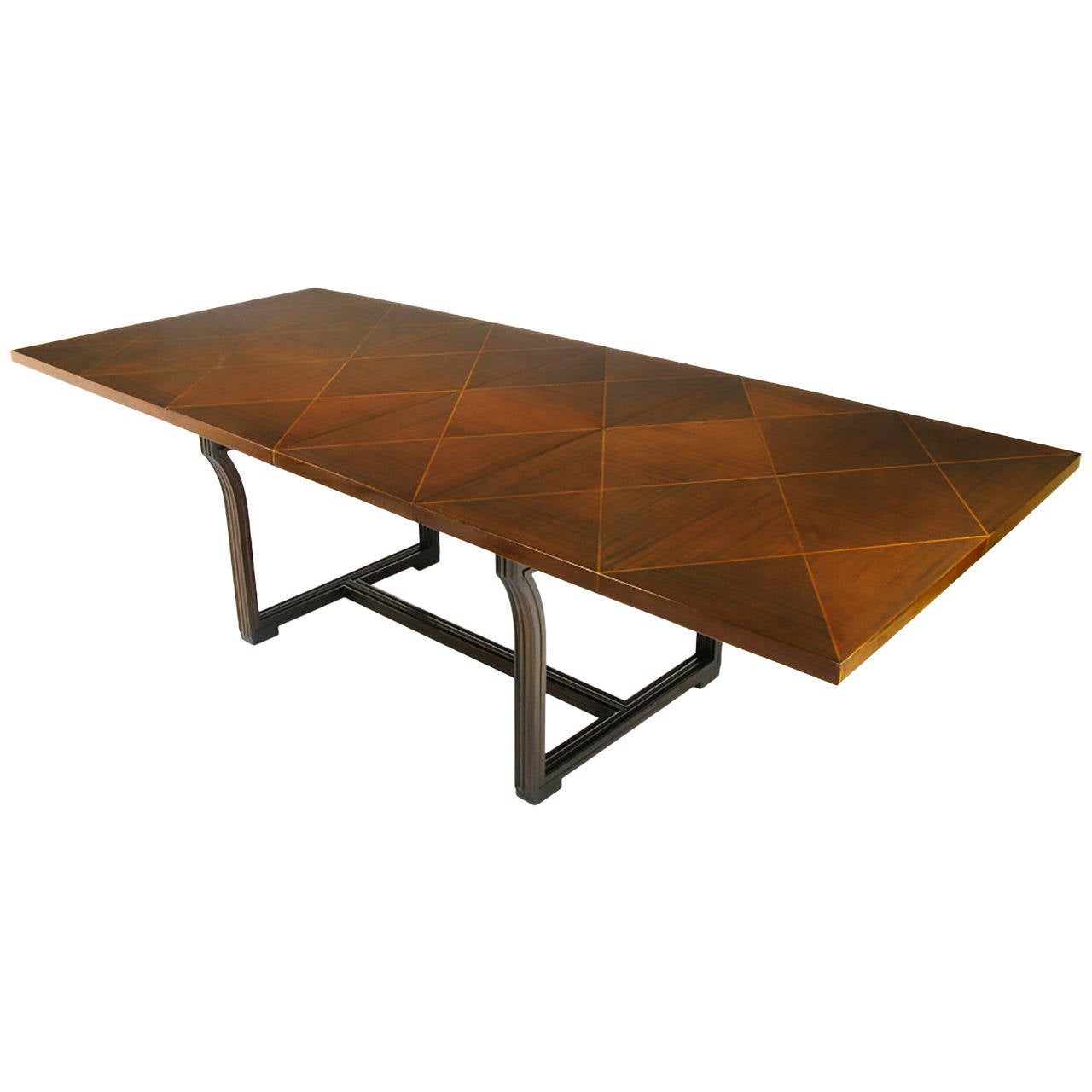 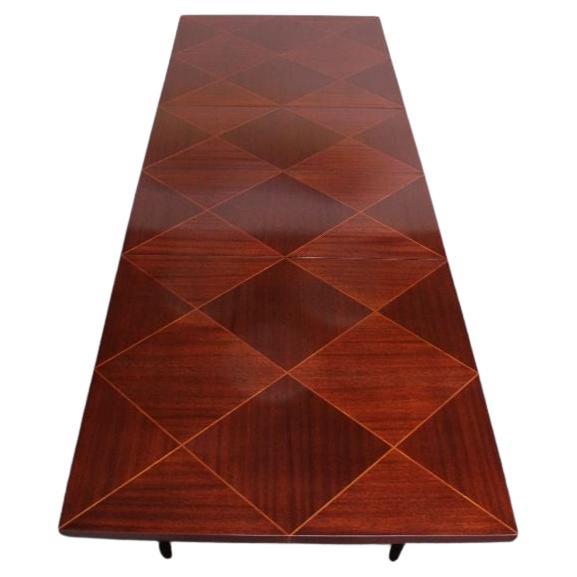 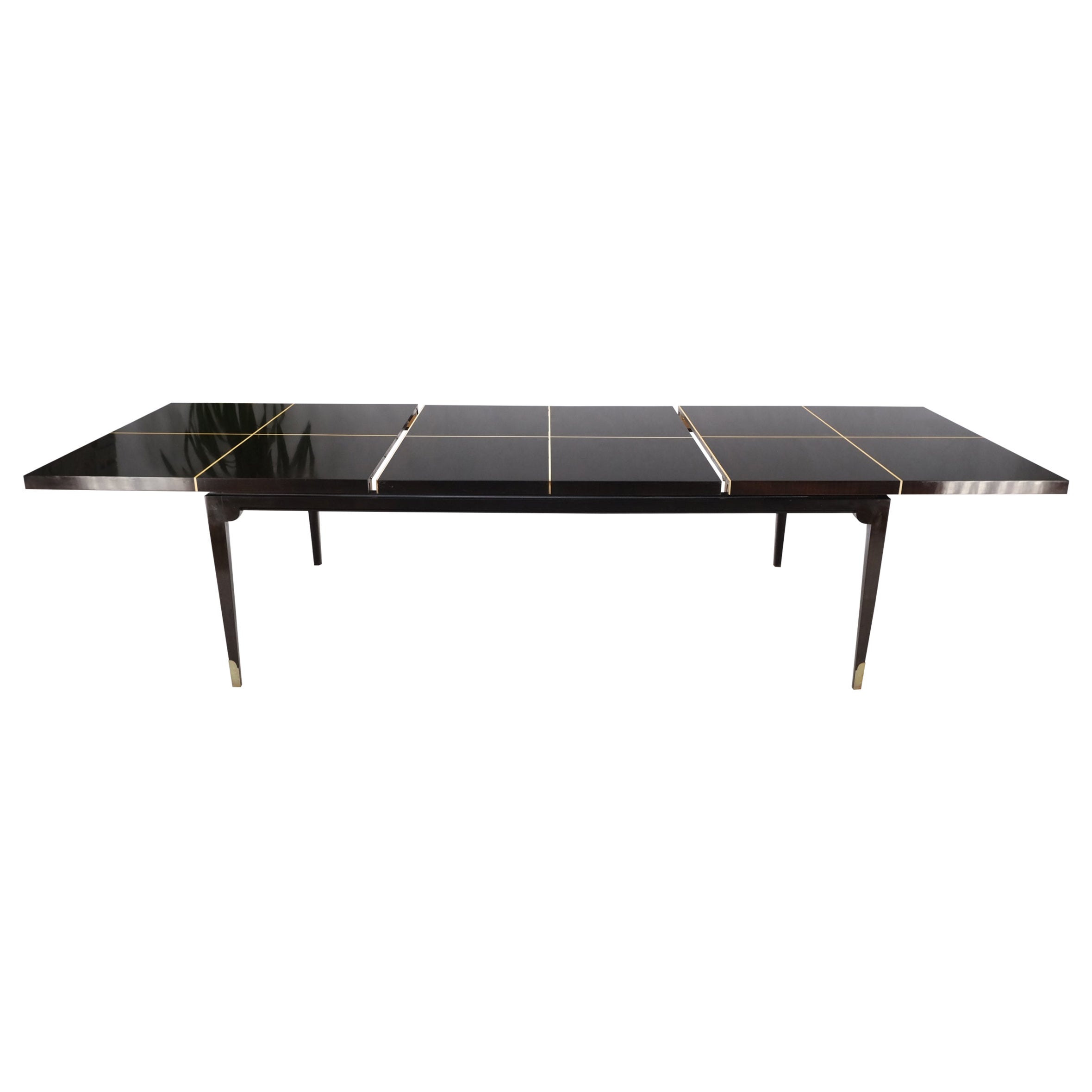 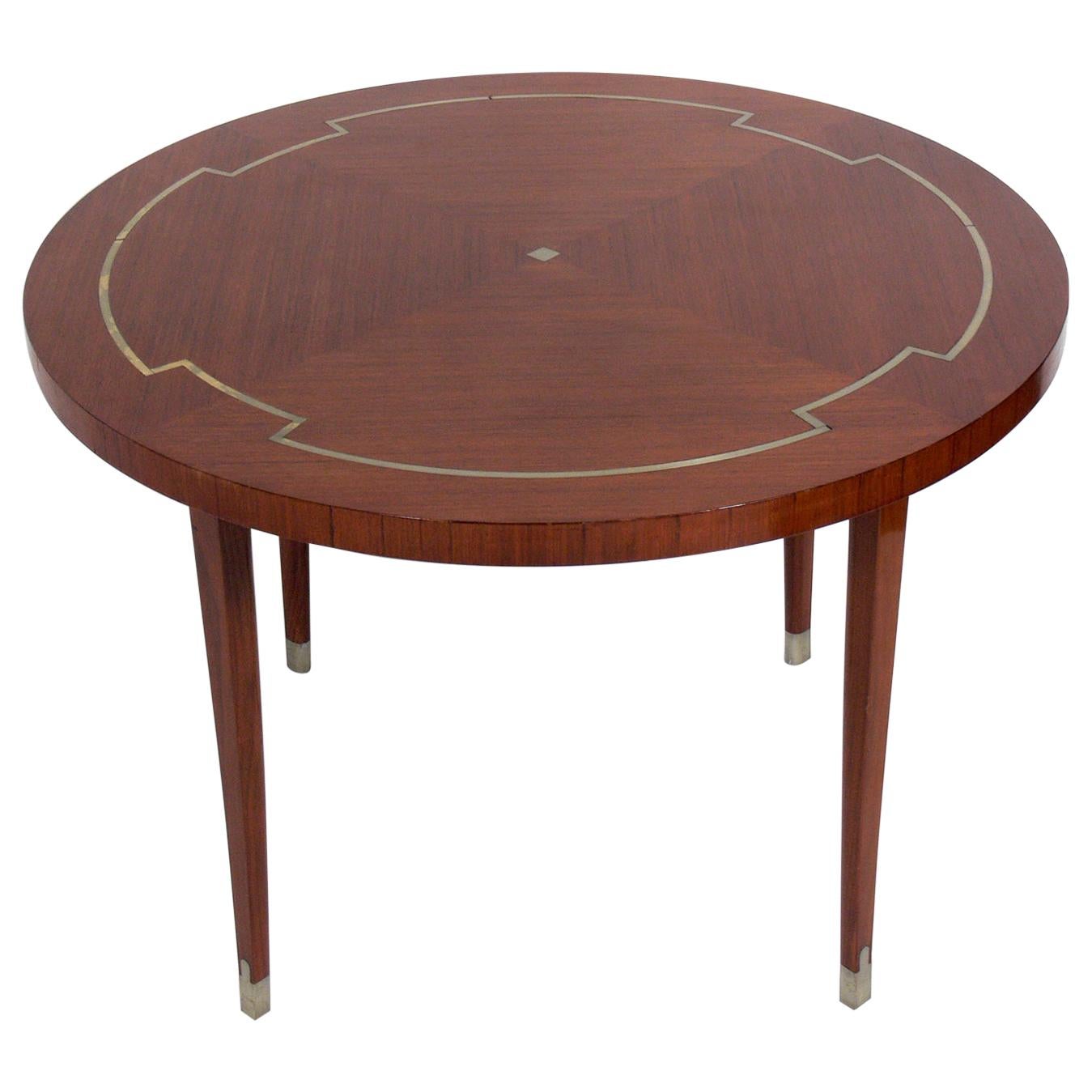 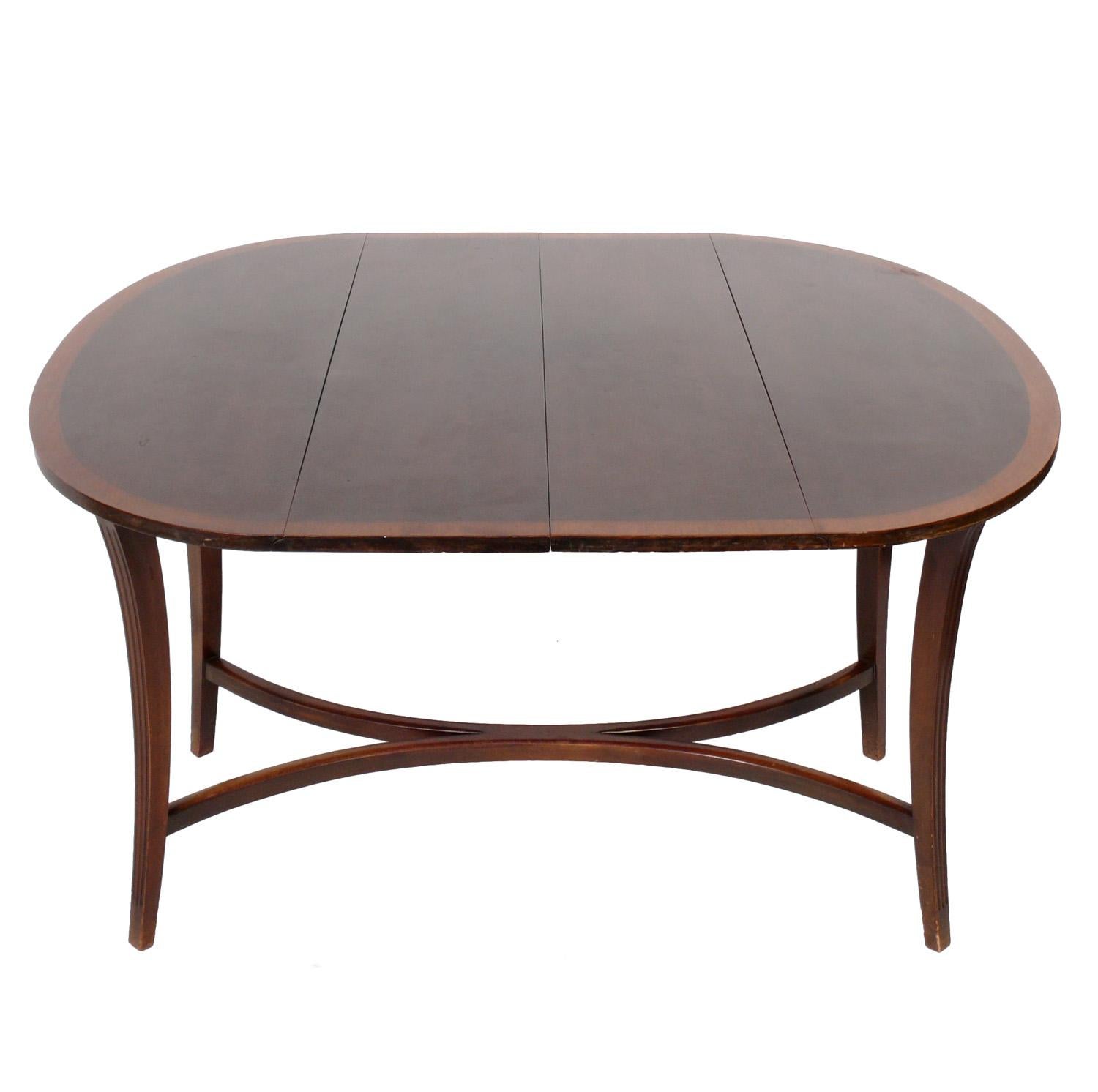 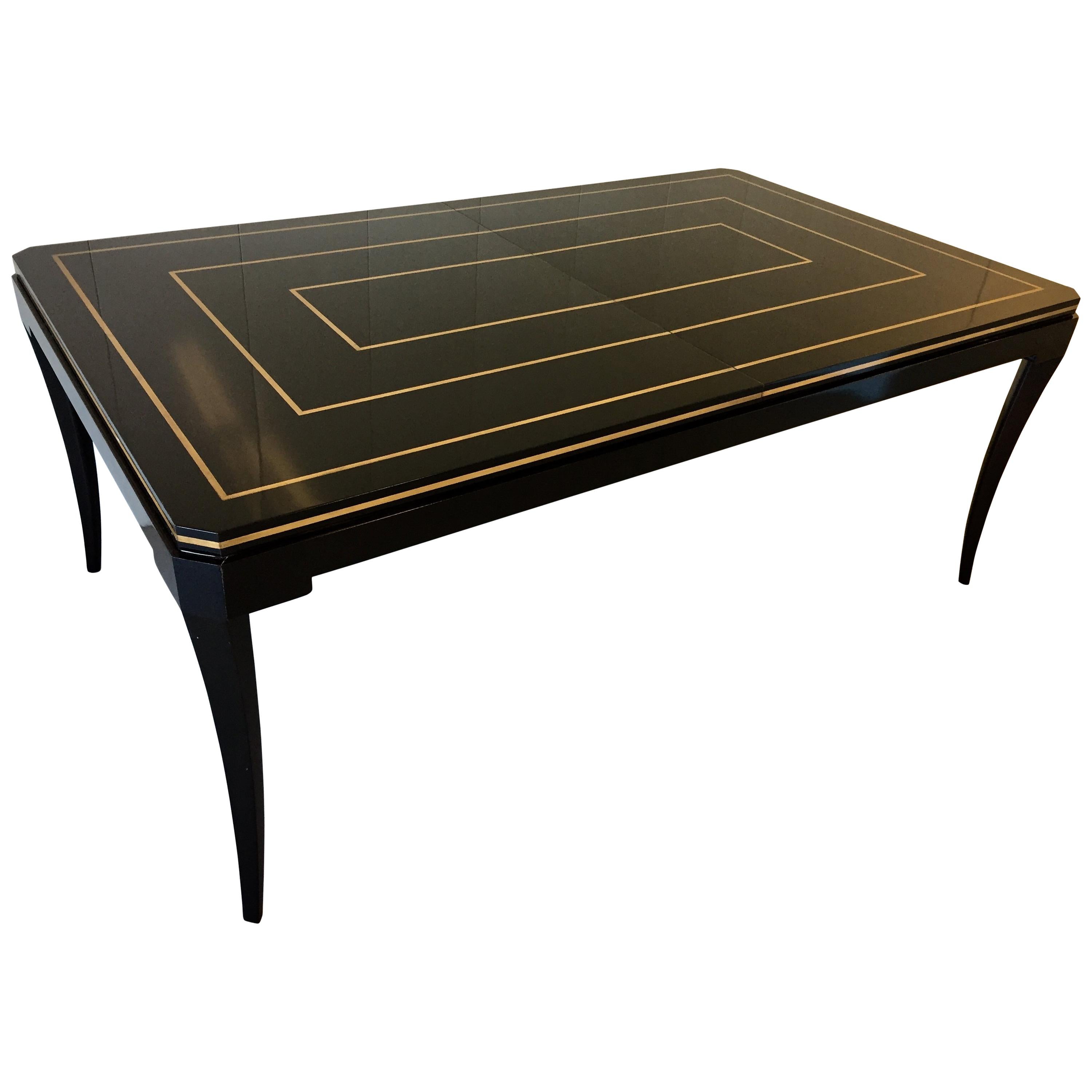 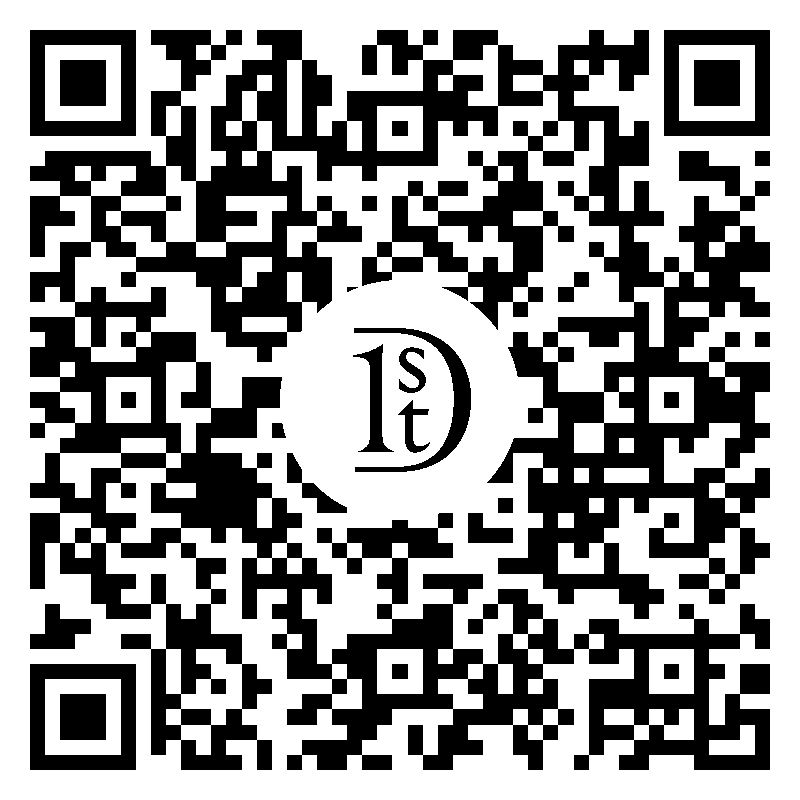 A rare collectors item with innovative technology and design, this Tommi Parzinger for Charak Furniture Company Mahogany table crafted in circa 1951 features geometric fruitwood inlay on top of squared tapered legs, a drop leaf and rotating design that allows the table to convert from console to desk to game table and three leaves that can convert the table from a small cafe table for up to four chairs and up to a larger traditional dining table suitable for six to eight dining chairs. This refined and sophisticated Parzinger table provides so many solutions to common household spacial problems - perfect for those high-end luxury pads where space is limited and you need to make the most of every square foot. At its smallest this table functions as a console table, place it against a wall with both drop leaves facing down. When you need some writing space or a little extra table-top, lift one drop leaf into position (two support bars underneath easily move into place) and now you have plenty of room for your laptop computer and zoom calls, a cup of coffee and more. Pull the table out from against the wall and lift the other leaf then give it a spin. Now the table is suited for a breakfast or game table - plenty of space for two people and comfortable for four. Now add in one, two or all three leaves - and the table expands to suit up to eight guests making this the most ingenious inventions of the early 20th Century. This invention was called 'The Danbury Table' and was copyrighted in 1934 by Charak Furniture Company. Parzinger took the technical innovation and gave it the style and panache that he was known for. Another amazing element of this table is that it is from Parzingers earlier years making it more collectible than his later work. Parzinger later designed for Charak Modern (evolved from Charak Furniture Company) and Parzinger Originals. His ability to create new trends was matched only by his understanding of how to design timeless style. This table design represents his earlier works and was continued throughout his years into many other tables in his catalogues. Naturally his pieces are often found in homes of incredible style and taste, as a dealer we often find these in luxury homes from 'old money' as they say. This particular example is from around 1951 making it an early piece and therefore ideal for collectors and connoisseurs. Let's not skip one more aspect of this table that is equally important - the collectors appeal. Furniture by Tommi Parzinger is one of the most sought-after and cherished items of sophisticated collectors. This isn't for your typical Eames and George Nelson collector, it is much more for a refined collector, perhaps a connoisseur of fine rarities. The quality of the materials and craftsmanship and design details are something to be admired. Parzinger and Charak designed and crafted some of the highest quality furniture of the early and mid 20th Century. That was at a time when US manufacturing was at its best. And now in this day and age of cheap products not meant to last - this table is your daily reminder that 'they don't make them like they used to.' This example is signed with its original Charak label which reads: ''This piece was made by hand in the workshops of Charak Furniture Co., Boston, The Danbury Table, copyright 1934, Charak Furniture Company.'' Inside of the stretcher mechanisms a Charak stamp is also found. We restored this ingenious table by hand-applying a new French Polish lacquer. French Polish is the most laborious and expensive finish because it requires many repetitive coats and each one hand polished to a fine glass-like finish, and while it is very expensive, it is worth it for rare and valuable pieces like this Tommi Parzinger table. The results are nothing short of spectacular - such a smooth, clear and deep finish - it looks almost like a sheet of glass (much more incredible in-person than you can see (or touch / feel) in the photos). And besides how incredible it looks - it will also protect your investment for the decades ahead. This Parzinger table / console / desk is an ideal example for the most discriminating interior designer client or collector. This mahogany and fruitwood inlay extension dining table by Tommi Parzinger for Charak Furniture Company would work great in an Art Deco, Hollywood Regency, Post-Modern or Mid-Century Modern home or penthouse apartment but could also look fantastic in a Contemporary, Space Age Mod, Scandanavian Modern, Danish Modern or Zen / Minimalist room. Also consider mixing it up in a Traditional, Transitional, or Classical room with a splash of juxtaposition. Would also be an apt choice in a commercial project such as a hotel lobby lounge or members club, creative design studio or high-rise executive office. MEASUREMENTS: As a Console Table with drop-leaves down: H 29.25" x W 38.5" x D 20" As a Writing Table / Desk with one leaf up: H 29.25" x W 38.5" x D 30.75" As a Cafe / Breakfast / Game Table: H 29.25" x W 41.25" x D 38.5" *Each Leaf is 9.25" With one leaf: H 29.25" x W 50.5" x D 38.5" With two leaves: H 29.25" x W 59.75" x D 38.5" With three leaves: H 29.25" x W 69" x D 38.5" CONDITION: Newly restored in a gorgeous French Polish. Some signs of age and prior use still apparent under the refinish as to be expected with an item of this age. Beautiful and ready for immediate use in a high end luxury interior. 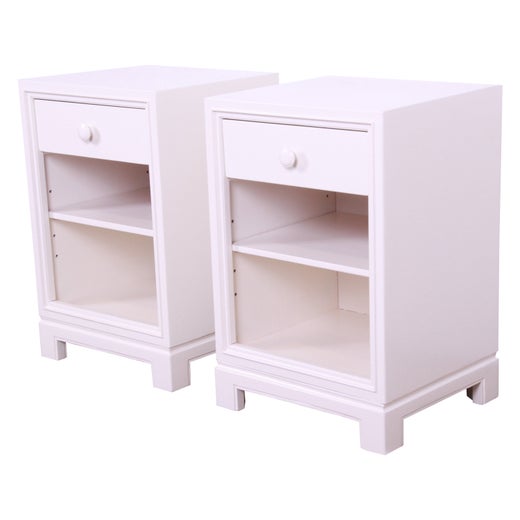 Over the course of nearly seven decades, Charak Furniture Company produced exemplary reproductions of 18th-century-era furniture, including works created in the American colonial and Georgian styles, as well as sophisticated mid-century modern pieces made by the likes of German furniture designer and painter Tommi Parzinger.

Charak was established in Boston, Massachusetts, in 1919. It earned a reputation for exceptional design and durability, and the 1920s were a period of high production for the brand. Charak was a leading manufacturer of reproductions of early American furniture that was influenced by Queen Anne– and Georgian–era design, including secretaries, dressers and cabinets with exquisite details like accented moldings, carved finials, recessed door panels, claw feet and other embellishments.

While the Great Depression put many furniture manufacturers out of business, Charak Furniture Company weathered the era’s difficulties. In fact, during the 1930s, it introduced one of its most enduringly popular dining tables: the drop leaf Danbury table. The solid mahogany table, which features four leaves to comfortably accommodate larger dining parties as necessary, is supported by four slender and elegantly curving legs, a wonderful example of the company's furniture from this era.

In the 1950s, Charak Furniture Company continued to thrive by shifting production to suit modern tastes. It worked with designers like Donald Deskey and Tommi Parzinger to develop collections that boast the clean lines and sleek silhouettes that characterized many of the period’s designs. The collaborations proved fruitful and prolific. The company’s rare revival and mid-century modern pieces have considerable appeal for today’s collectors.

In its heyday, Charak Furniture Company had showrooms in Chicago and New York City. Today, a 1958 desk designed by Deskey is part of the permanent collection at the Carnegie Museum of Art.

Recognized Seller
These prestigious sellers are industry leaders and represent the highest echelon for item quality and design.
Diamond Seller
These expertly vetted sellers are 1stDibs' most experienced sellers and are rated highest by our customers.
Established in 2012
1stDibs seller since 2015
1,769 sales on 1stDibs
Typical response time: 1 hour
Associations
20th Century Specialists
More From This Seller

$18,000
Tommi Parzinger Dining Table
By Tommi Parzinger
Located in Atlanta, GA
Elegant dining table, designed by Tommi Parzinger for Parzinger originals, circa 1960s. This table is currently being refinished and can be completed in your choice of finish color. ...
Category

$6,500
Tommi Parzinger Dining Table
By Tommi Parzinger
Located in Atlanta, GA
Elegant dining table, designed by Tommi Parzinger for Charak Modern, American, circa 1950s. This table is currently being refinished and can be completed in your choice of finish col...
Category