Items Similar to "Sunset in the City"
Gershon Benjamin - "From the Studio, Manhattan" 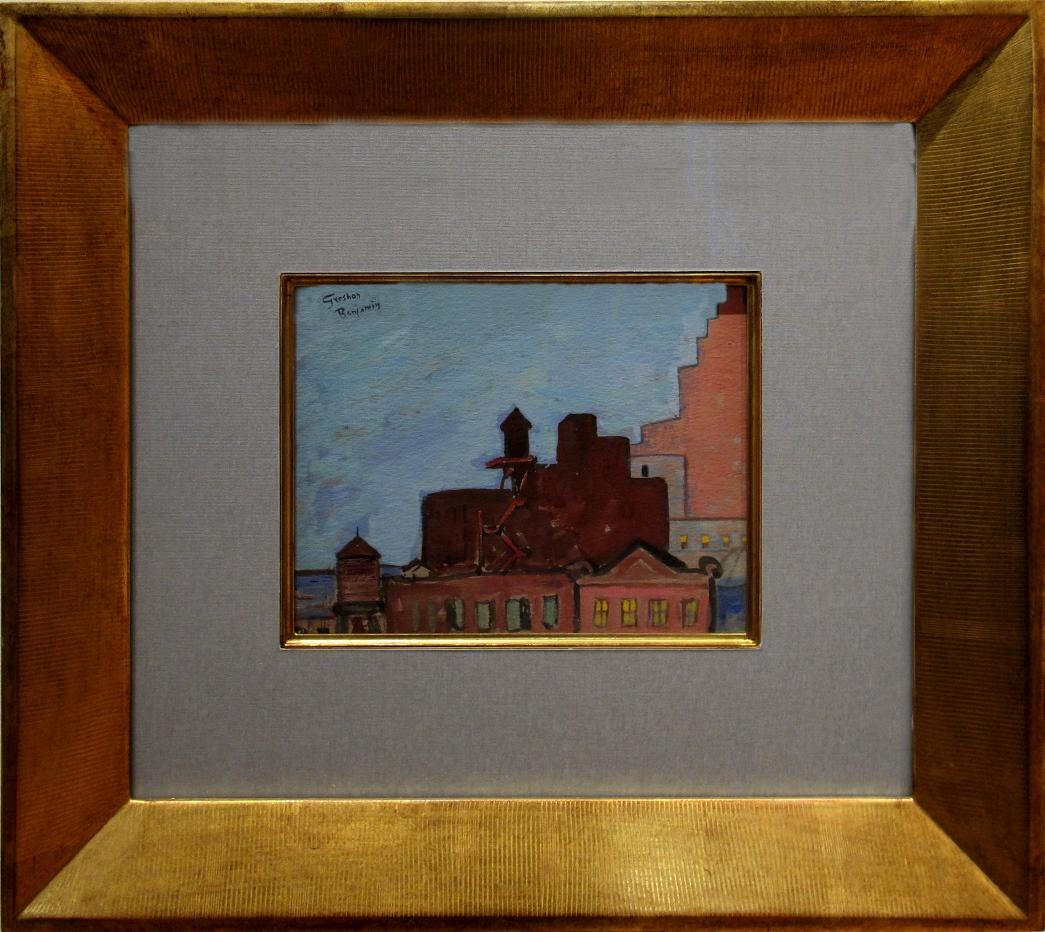 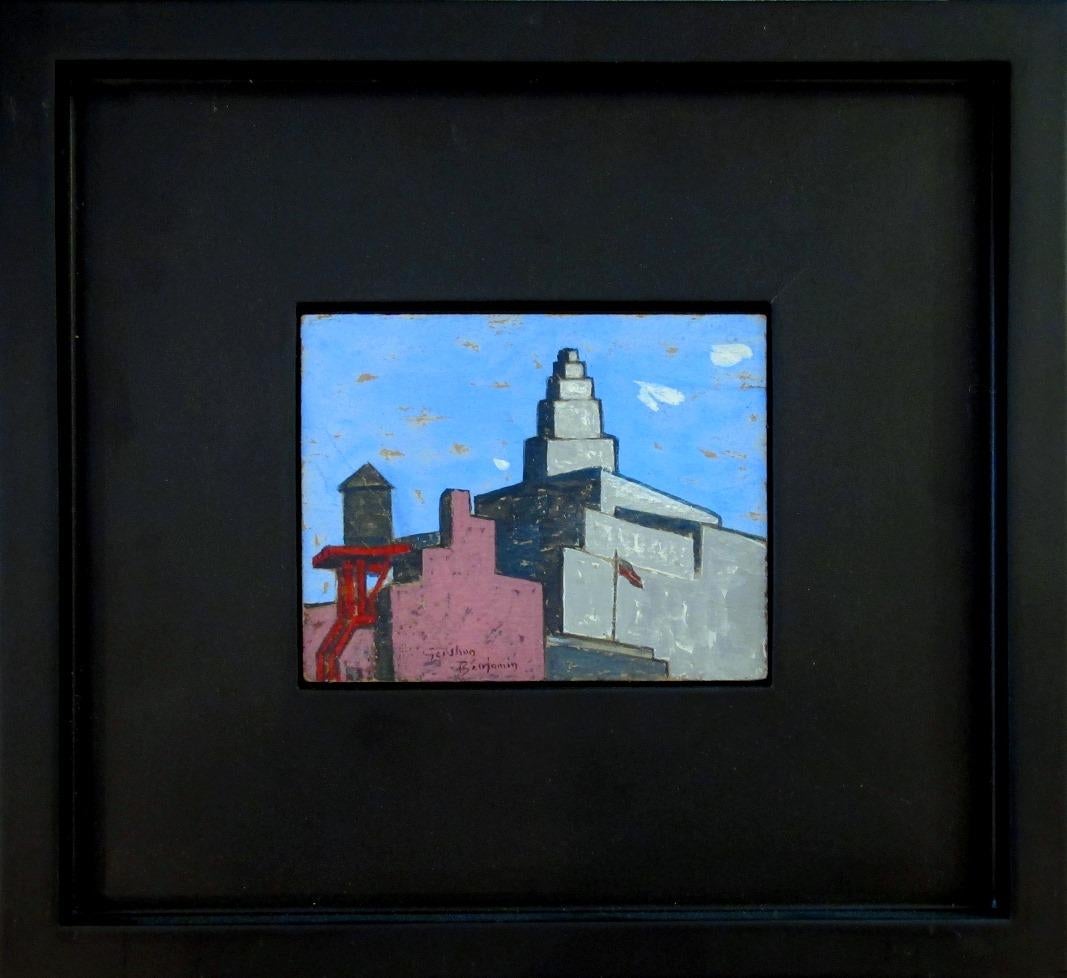 Gershon Benjamin - "Sunset in the City" 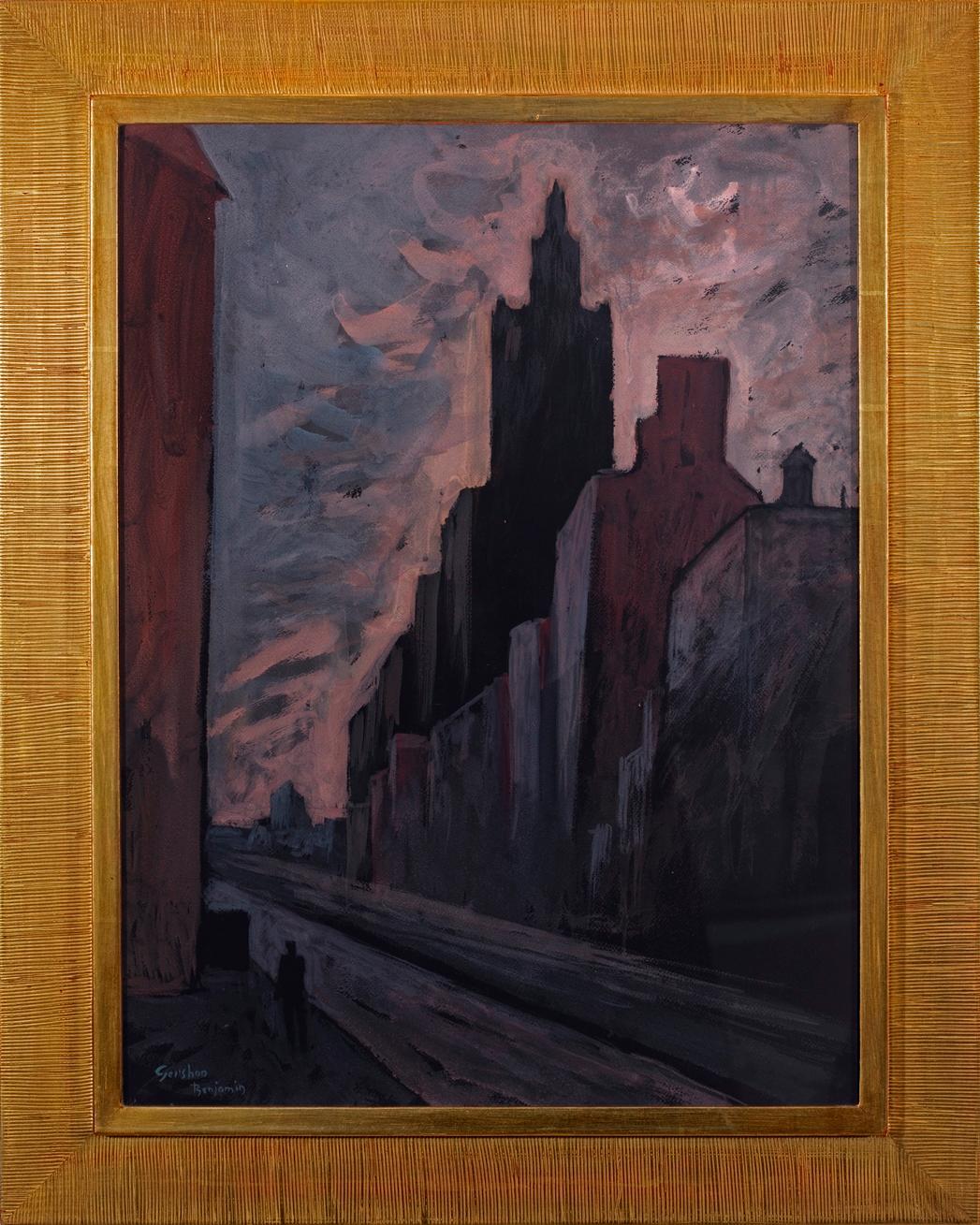 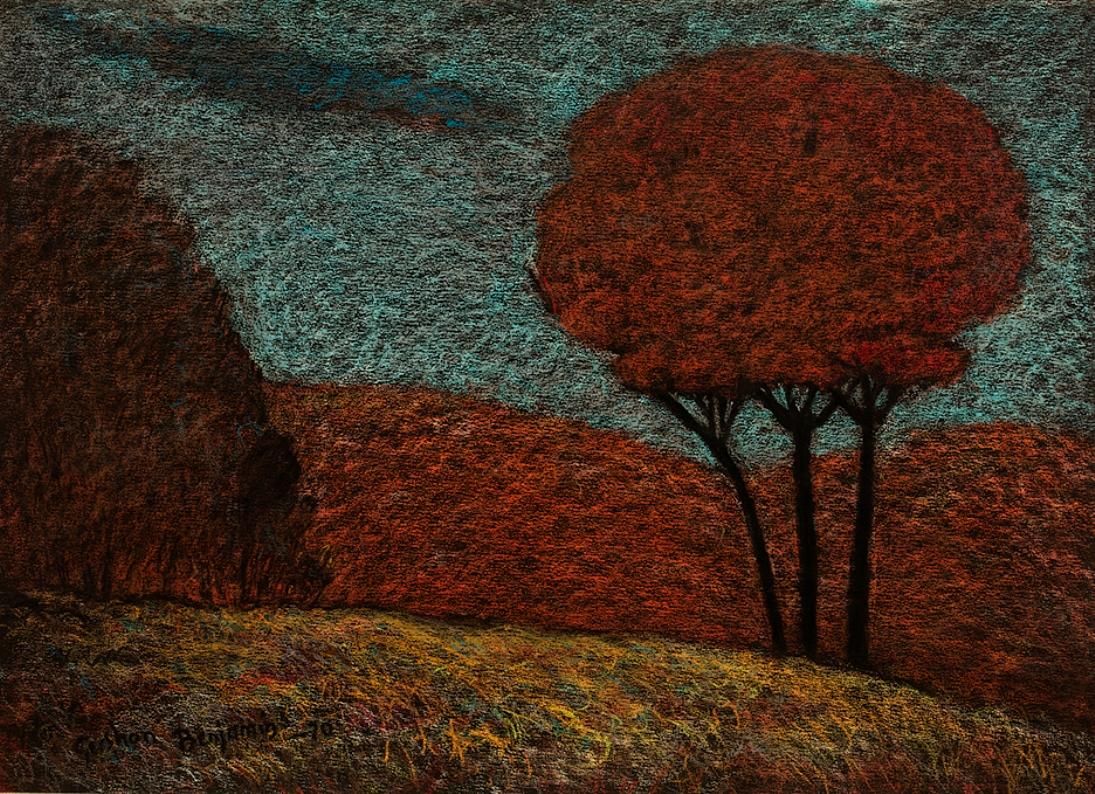 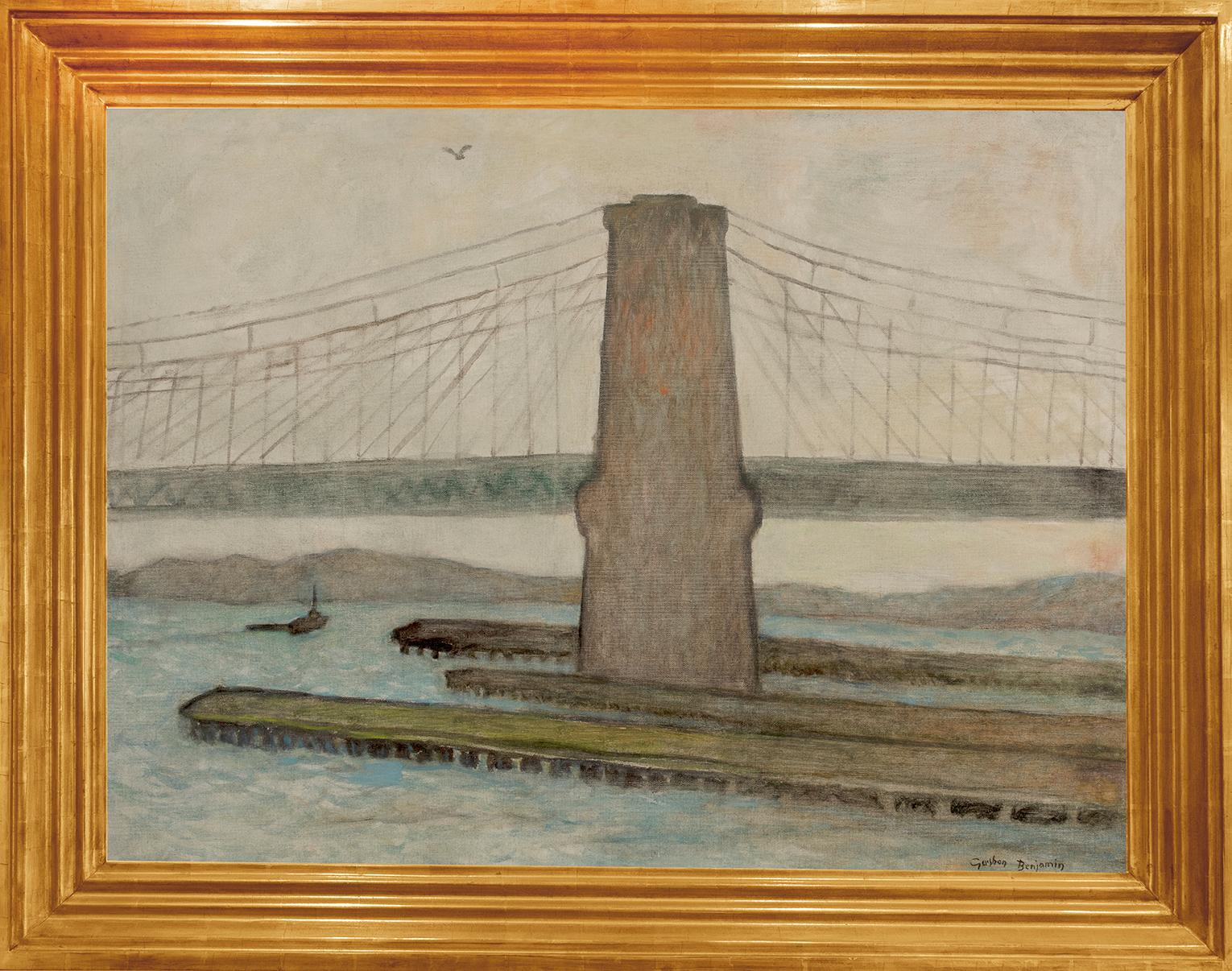 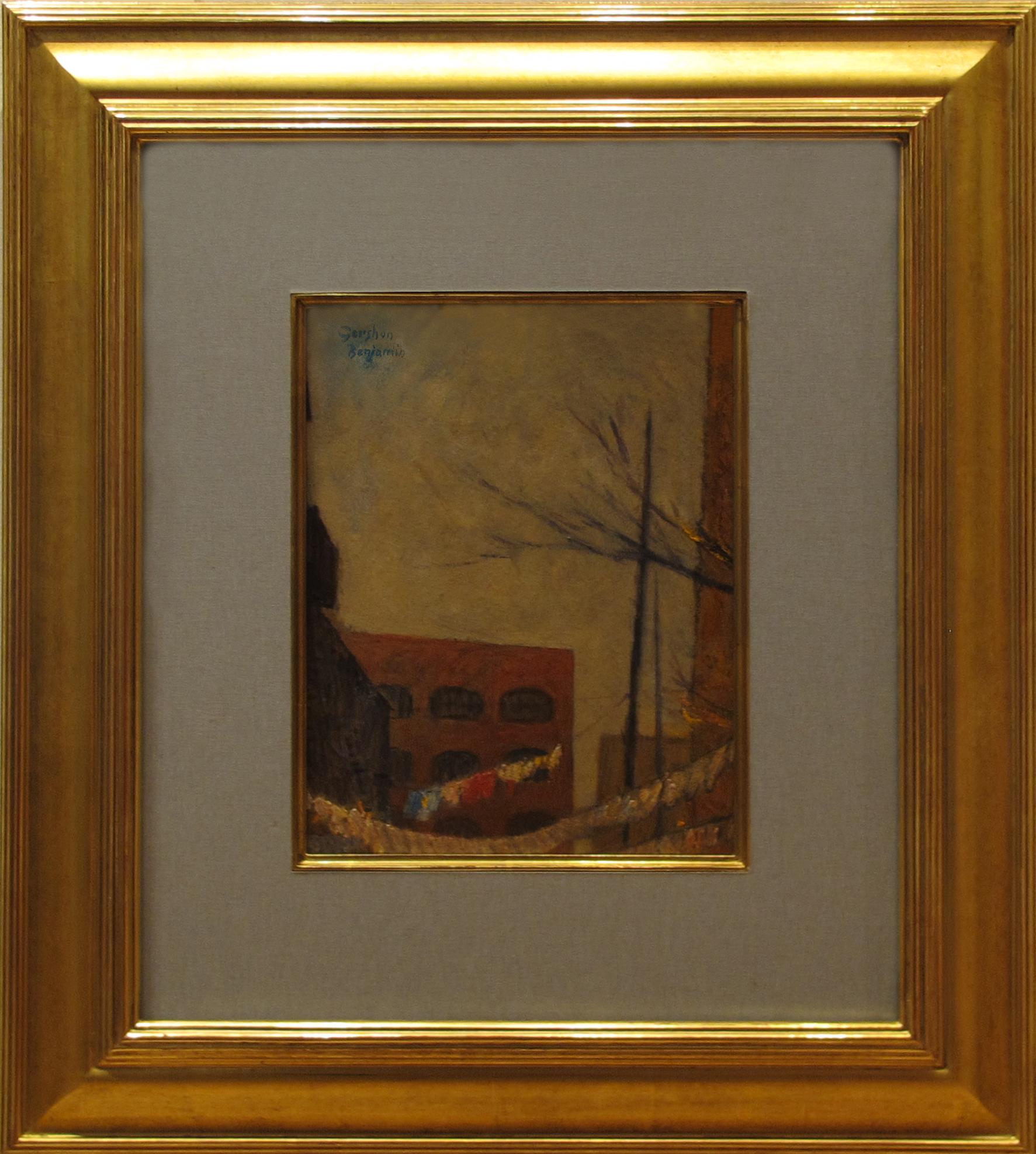 Gershon Benjamin
"Sunset in the City" 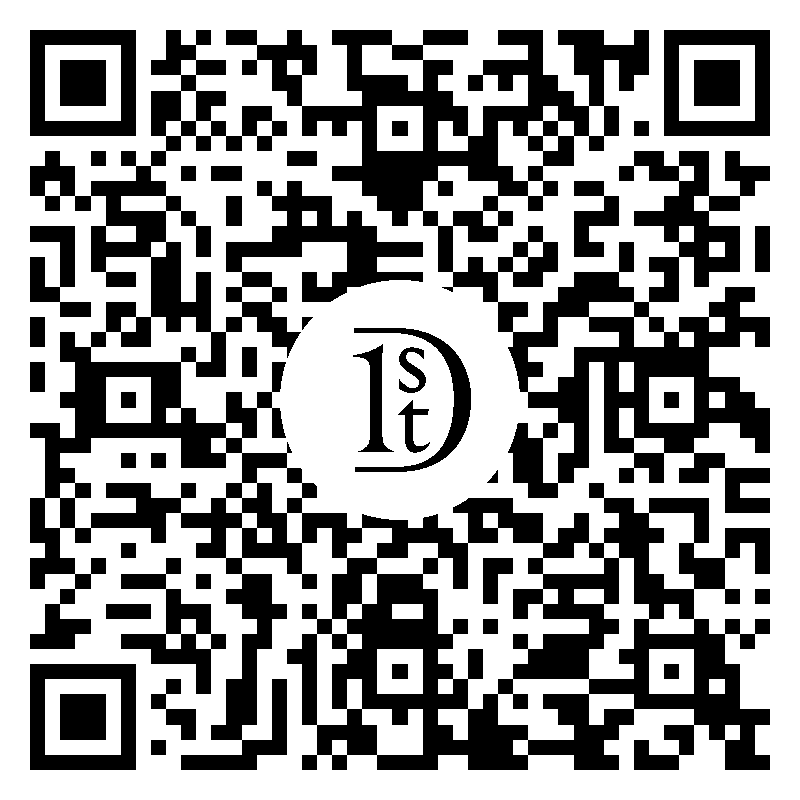 Jim's of Lambertville is proud to present this artwork by Gershon Benjamin (1899 – 1985) An American Modernist of portraits, landscapes, still lifes, and urban scenes, Gershon Benjamin, sustained an active career for over seven decades. Dedicated to artistic expression that was both personal and honest, Benjamin believed: “To feel is to know and to know is to feel; all my paintings represent that through color, line, and subject.” Born in Romania, Gershon Benjamin moved with his family to Montreal, Canada in 1901. He began studying art when he was ten, taking classes at the Council of Arts and Manufacturers of the Province of Quebec. Among his teachers was the prominent Edmond Dyonnet. In 1913, Benjamin enrolled at the Royal Canadian Academy, where he was taught and encouraged by William Brymner, the president of the Academy at the time. In 1923, Gershon Benjamin moved to New York, where he began working the night shift at the New York Sun’s art department and enrolled at the Art Students League. Among his teachers at the League were Joseph Pennell, from whom he learned engraving, and John Sloan, the figural drawing instructor. While in New York, Gershon Benjamin began associating with a circle of progressive-minded artists, including Milton Avery, Mark Rothko, Adolph Gottlieb, Arshile Gorky, and Raphael and Moses Soyer. These artists often painted together and critiqued each other’s work. Benjamin was neither interested in commercial success nor in competing with others for notoriety. Although many of these associates became infamous artists, Benjamin was content to simply paint, supported by his job at the New York Sun. This choice has enabled Benjamin’s work to remain largely unknown but highly sought-after. 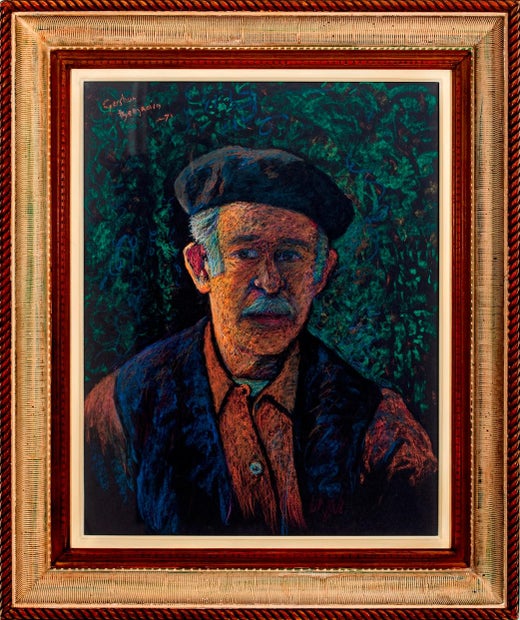 In a body of work that spans seven decades, obscure American modernist artist Gershon Benjamin explored a varied range of tone, style and subject matter in watercolor, oil and charcoal. Not one to resign himself to a single trademark theme, Benjamin focused on an eclectic array of subjects. His paintings included landscapes, portraits, still lifes and urban scenes.

Benjamin was born in Romania just before the turn of the 20th century. His family moved to Montreal in 1901 to escape ethnic persecution. At 10, Benjamin began studying art at the Canadian Council of Arts and Manufacturers, in Quebec. When he was 12, the Royal Canadian Academy admitted Benjamin.

In 1923, Benjamin moved to New York City, where he secured a night job in the art department of The Sun newspaper. He also enrolled in the Art Students League, where he learned engraving from the notable lithographer Joseph Pennell and drawing from illustrator John Sloan.

Benjamin found inspiration in the work of Pablo Picasso and Paul Cézanne. He depicted urban life in meditative Expressionist paintings that later drew comparisons to the Ashcan School — Benjamin painted scenes of New York City’s blocky skyline, elevated subway trains, empty streets at dawn and the Brooklyn Bridge as he saw them on his way home from his night shift at the newspaper.

In New York, Benjamin forged friendships with creative people who were as in love with art as he was and painted with them in Gloucester, Massachusetts, during the city’s hot summers. A number of his acquaintances found a fair amount of fame — including artists Mark Rothko, Raphael Soyer and Milton Avery — whereas Benjamin sought none. And when artists of the era in Manhattan and elsewhere began to work in the style that would become known as Abstract Expressionism, Benjamin continued to create representational art. He remained largely obscure throughout his career, declining to promote or market his still lifes, landscapes and portraiture.

Benjamin's works are held in a number of private and public collections including the Pennsylvania Academy of Fine Arts and the Ulrich Museum of Art.

About the Seller
5.0
Located in Lambertville, NJ
Vetted Seller
These experienced sellers undergo a comprehensive evaluation by our team of in-house experts.
1stDibs seller since 2014
33 sales on 1stDibs
Typical response time: 1 hour
More From This Seller