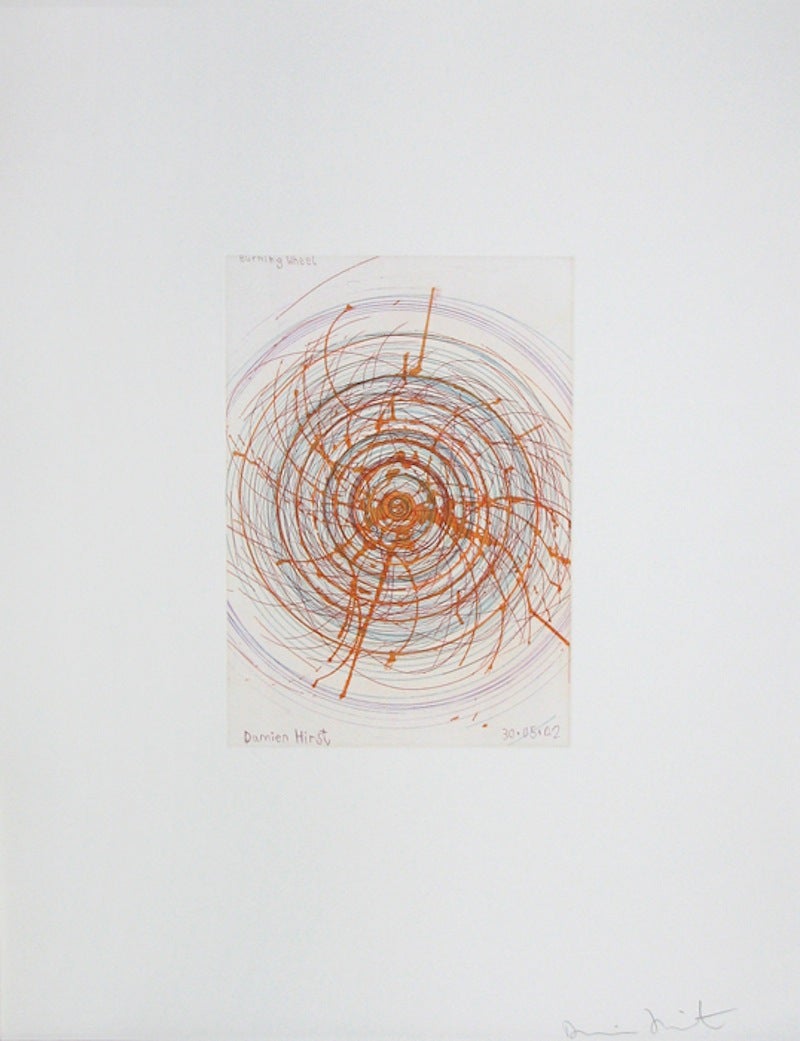 Damien Hirst - I Get Around, from In A Spin Series 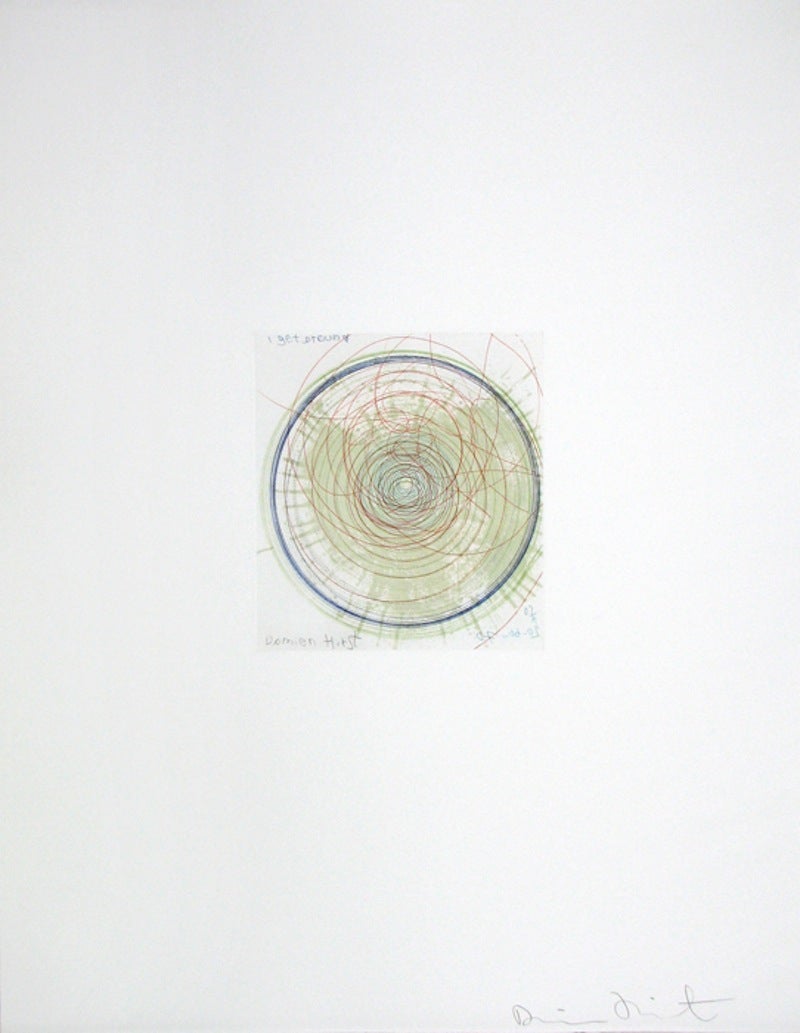 Damien Hirst - Wheel Within A Wheel, from In A Spin Series 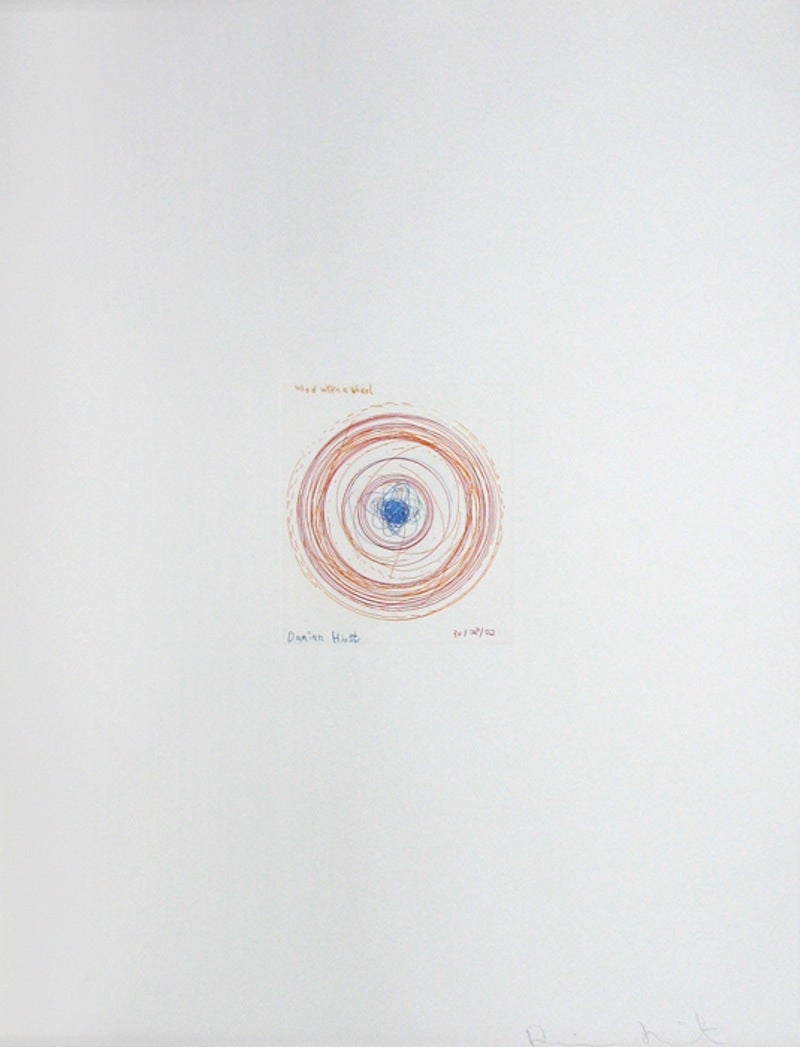 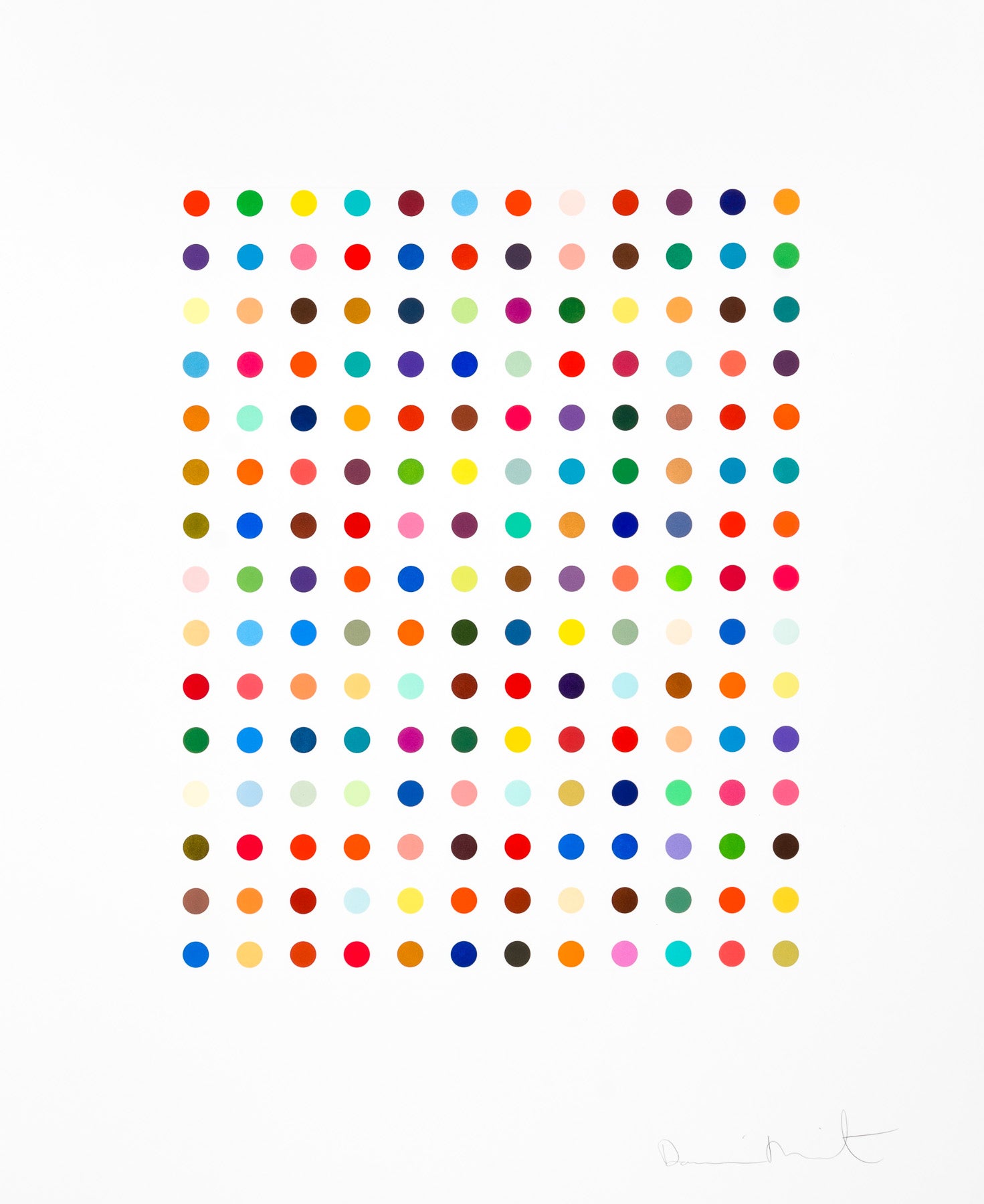 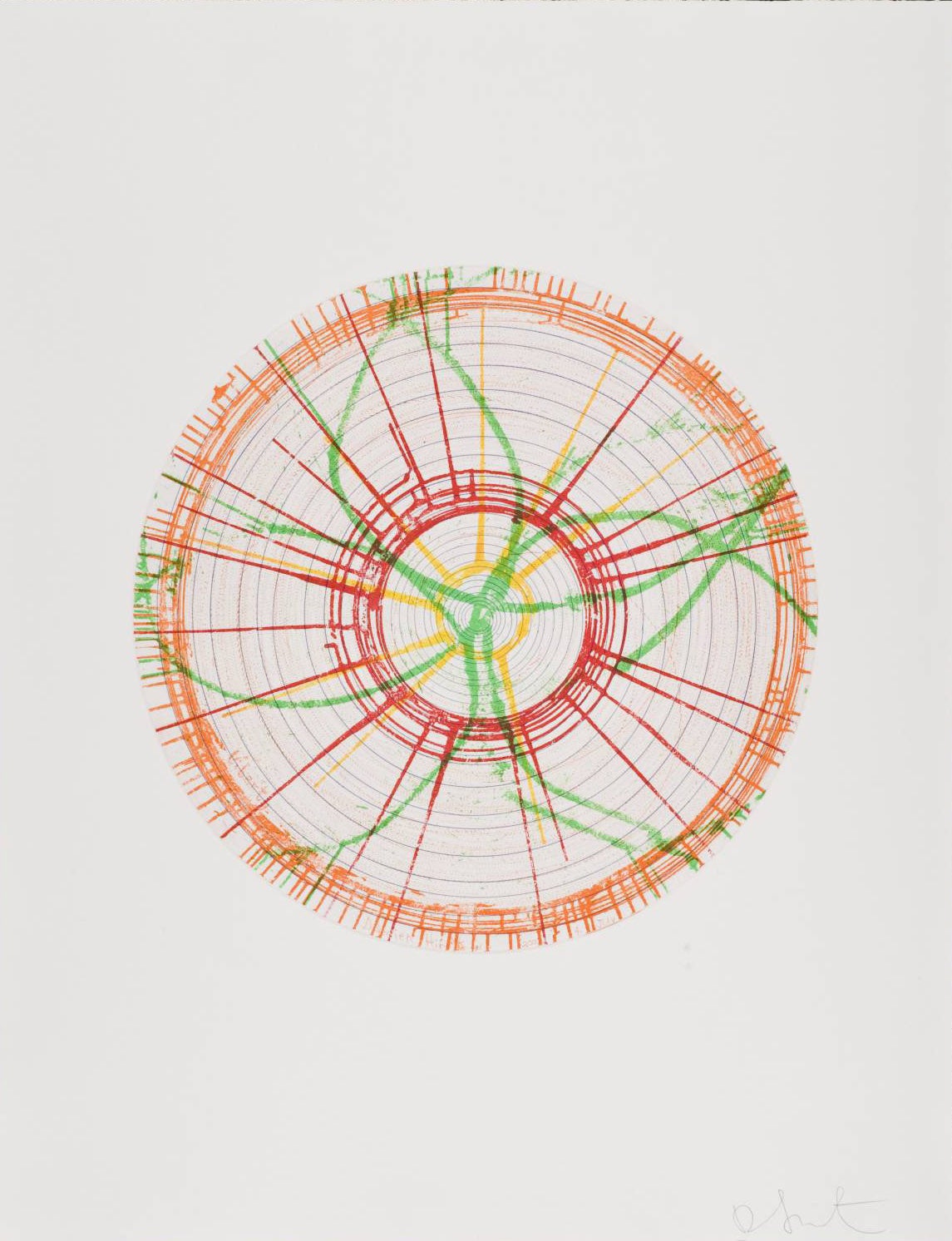 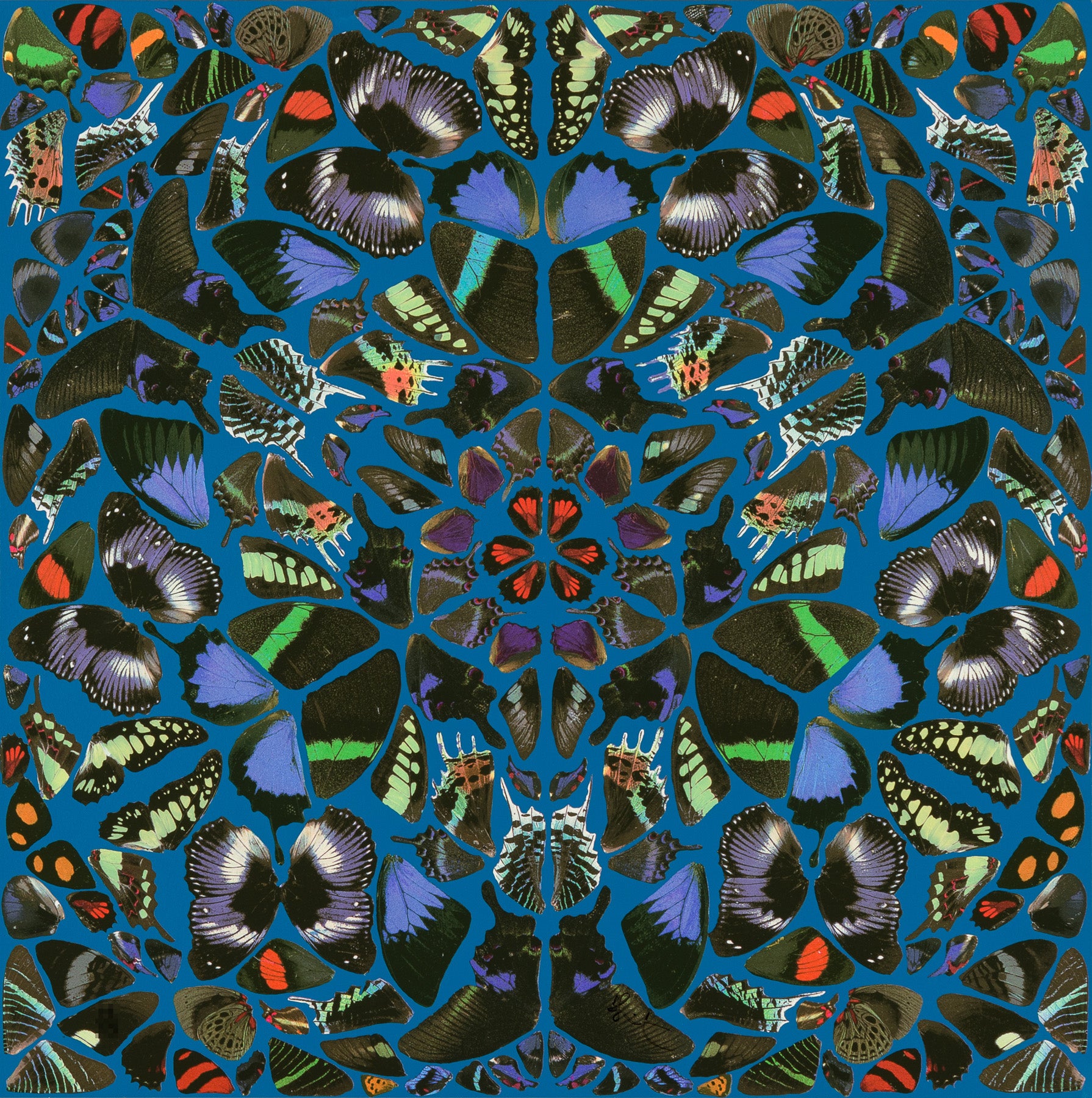 Damien Hirst
In A Spin, from In A Spin Series 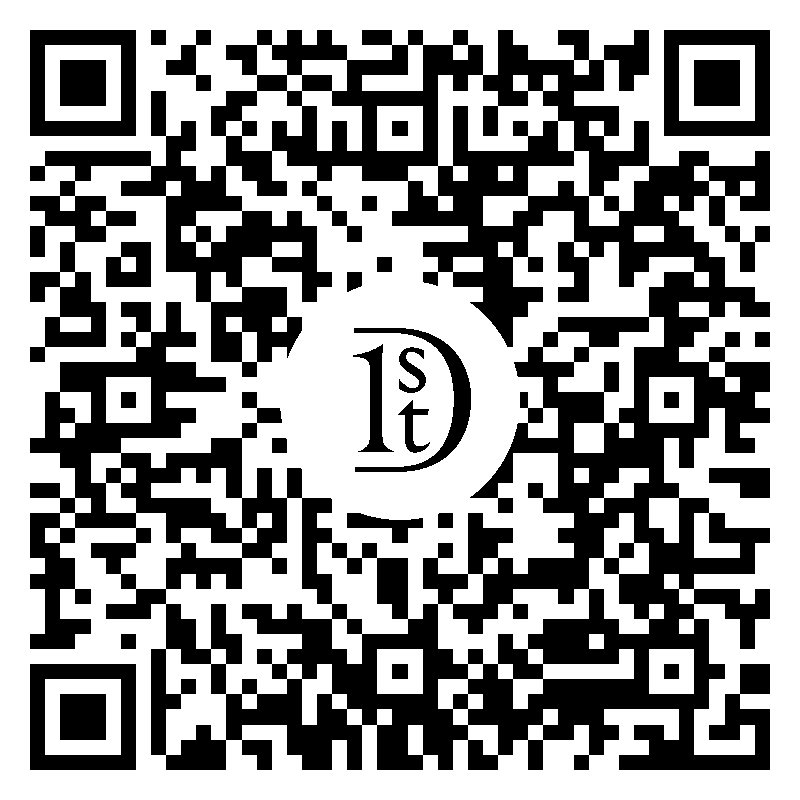 TECHNICAL INFORMATION: Damien Hirst In A Spin, from In A Spin: The Action Of The World On Things 2002 Spin etching S: 36 x 28 in. I: 6 x 4 in. Edition of 68 Pencil signed Condition: This work is in excellent condition. It has never been framed and always stored in mylar for its protection. Frame: Unframed. ABOUT THE WORK: While the spontaneity of the Spin Series stands in stark contrast to the formulaic Spots Series, both explore the idea of an imaginary mechanical painter. The results of the spins are controlled purely by the artist’s color choices and the motion of a spin machine that the artist had made for himself. Hirst explains the simplicity of their appeal: I really like making them. And I really like the machine, and I really like the movement. Every time they’re finished, I’m desperate to do another one. Since the mid-1990's Hirst has been working in an abstract mode, pouring paint on rotating canvases attached to a spin machine he had installed in his studio. For this recent series of etchings he attached copperplates to the machine and drew on them as they spun with needles, screwdrivers, and other sharp tools, in a performance-like ritual that lasted for several days. The prints' concentric-circle format, and the portfolio's title, were inspired by a long-exposure photograph Hirst had taken of the night sky, showing the stars arranged in an abstract pattern. ABOUT THIS ARTIST: Damien Hirst has become one of the most prominent artists of his generation. Many of his works are widely recognized, from the shark suspended in formaldehyde, “The Physical Impossibility of Death in the Mind of Someone Living”, and his spot, spin and butterfly paintings, through to later works such as the diamond skull “For the Love of God”. Throughout his work, Hirst investigates and challenges contemporary belief systems, and dissects the tensions and uncertainties at the heart of human experience. Hirst takes a direct approach to ideas about existence, exploring the complex relationship between art, life, death and religion. His work calls into question our awareness and convictions about the boundaries that separate desire and fear, reason and faith, love and hate. By using the tools and iconography of science and religion, he blurs the lines between science, religion, and art, giving the viewer the horror of immortality and the brilliance of reality. Death is a central theme in Hirst’s art work. He gives his audience an open mouth astonishment while challenging the viewer to confront the inevitability of existence. He became famous for a series of artworks in which dead animals (including a shark, a sheep and a cow) are preserved—sometimes having been dissected—in formaldehyde. The best known of these being The Physical Impossibility of Death in the Mind of Someone Living, a 14-foot tiger shark immersed in formaldehyde in a vitrine. n September 2008, he took an unprecedented move for a living artist by selling a complete show, "Beautiful Inside My Head Forever", at Sotheby's by auction and by-passing his long-standing galleries. The auction exceeded all predictions, raising $198 million, breaking the record for a one-artist auction. Since 1987, over 80 solo shows of Damien Hirst exhibitions have taken place worldwide, and his work has been included in over 260 group shows. His contributions to art over the last two and a half decades was recognized in 2012 with a major retrospective of his work at the Tate Modern.


In the 1990s, Hirst said, “I can’t wait to get into a position to make really bad art and get away with it.” And indeed, he is notorious for piquing critics and baffling the public with such pieces as his signature glass vitrines containing dead sheep or sharks in formaldehyde, and his diamond-encrusted skull, For the Love of God.


Working primarily in sculpture, Hirst takes after French modernist master Marcel Duchamp in his use of ready-made objects and materials, which he combines to ironic effect. He often creates in series, as with The Cure (Violet) and The Cure (Turquoise), both from 2014, which are among several pill paintings referencing Andy Warhol’s embrace of mass production. Belonging to his ongoing series of “spot” paintings, begun in the 1980s, the 2005 piece Xylene Cyanol Dye Solution is striking for its machinelike, industrial uniformity and almost childlike simplicity, a seeming rebuke to the idea of the artist-as-genius.


In addition to making art, Hirst has launched stores that sell editioned works (Other Criteria), a restaurant (Pharmacy2) and even his own London museum (Newport Street Gallery). 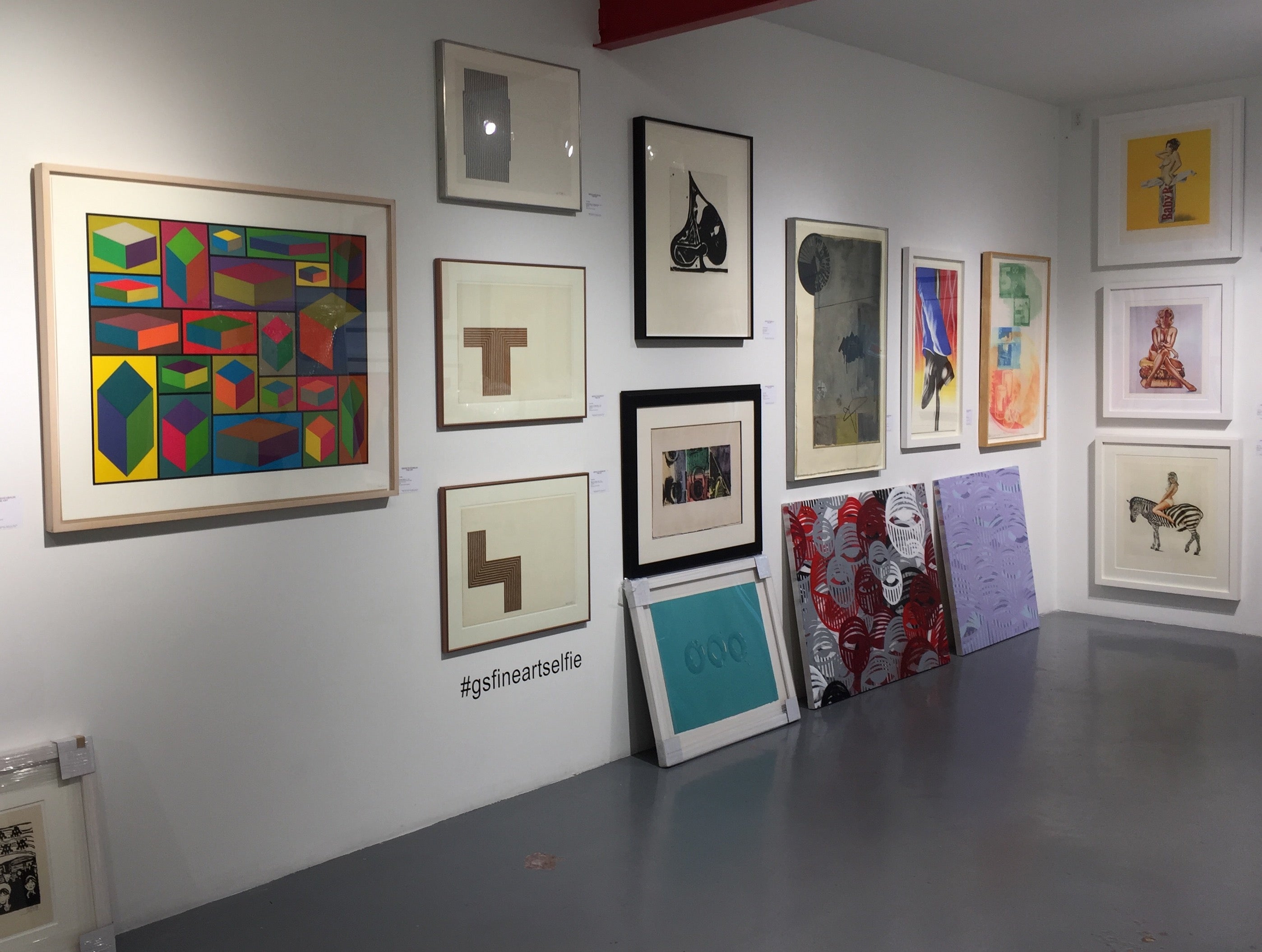 About the Seller
5 / 5
Located in Miami, FL
Vetted Seller
These experienced sellers undergo a comprehensive evaluation by our team of in-house experts.
1stDibs seller since 2017
33 sales on 1stDibs
Typical response time: 9 hours
More From This Seller
View All From Seller

$20,358
Damien Hirst, Multi-color 'Spots' Etching, 2004
By Damien Hirst
Located in New York, NY
The Multi-color Spots Etching by Damien Hirst is hand etched with aquatint in his signature, never repeated, palette of bright colors. Signed by the artist in pencil on the lower cen...
Category

Price Upon Request
Damien Hirst, Grey 'Spots', Etching, 2004
By Damien Hirst
Located in New York, NY
The 'Grey' Spots by Damien Hirst is an etching with aquatint in his signature, never repeated, palette of colors in neutral shades of grey. Signed by the artist in pencil on the lowe...
Category