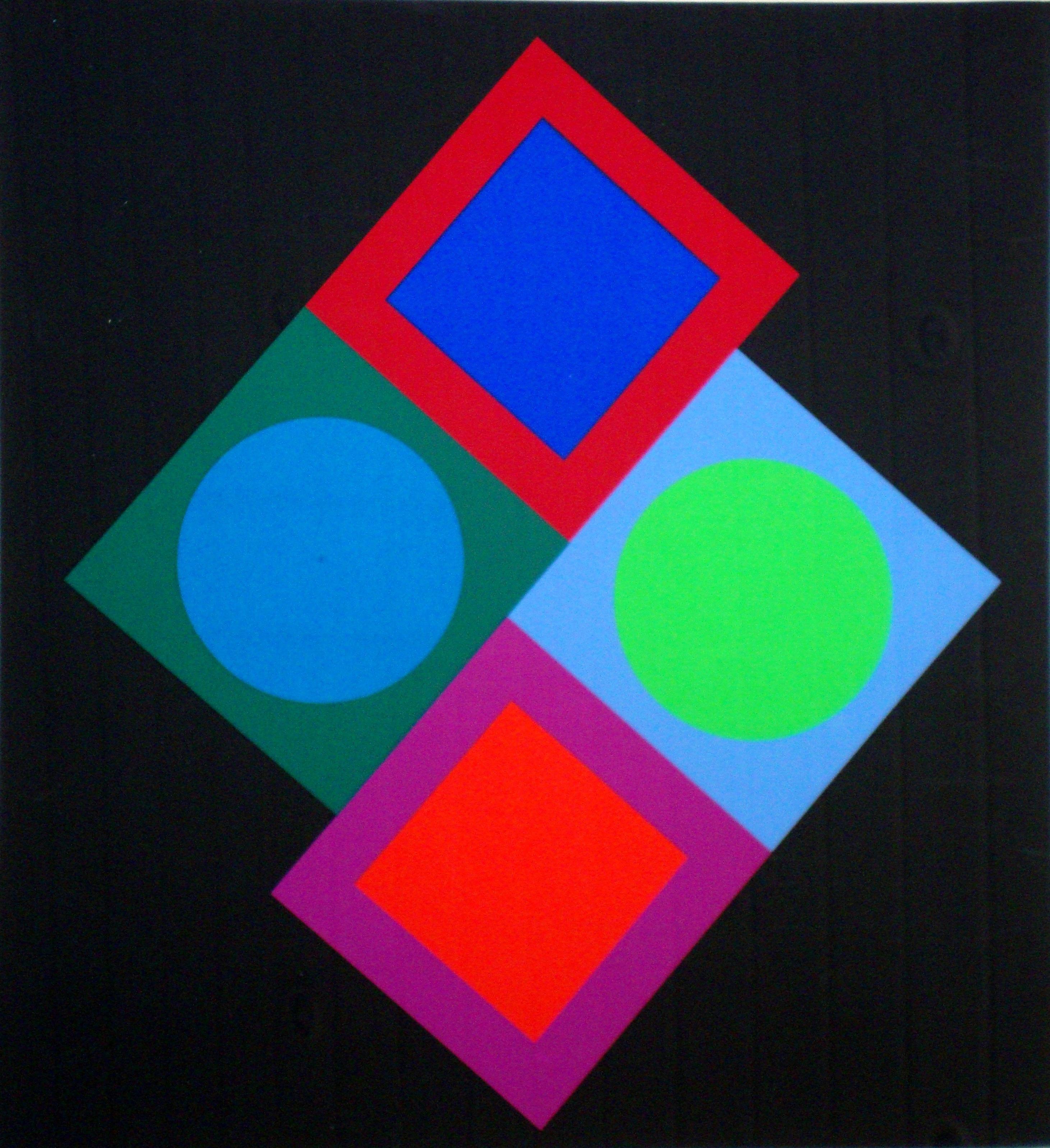 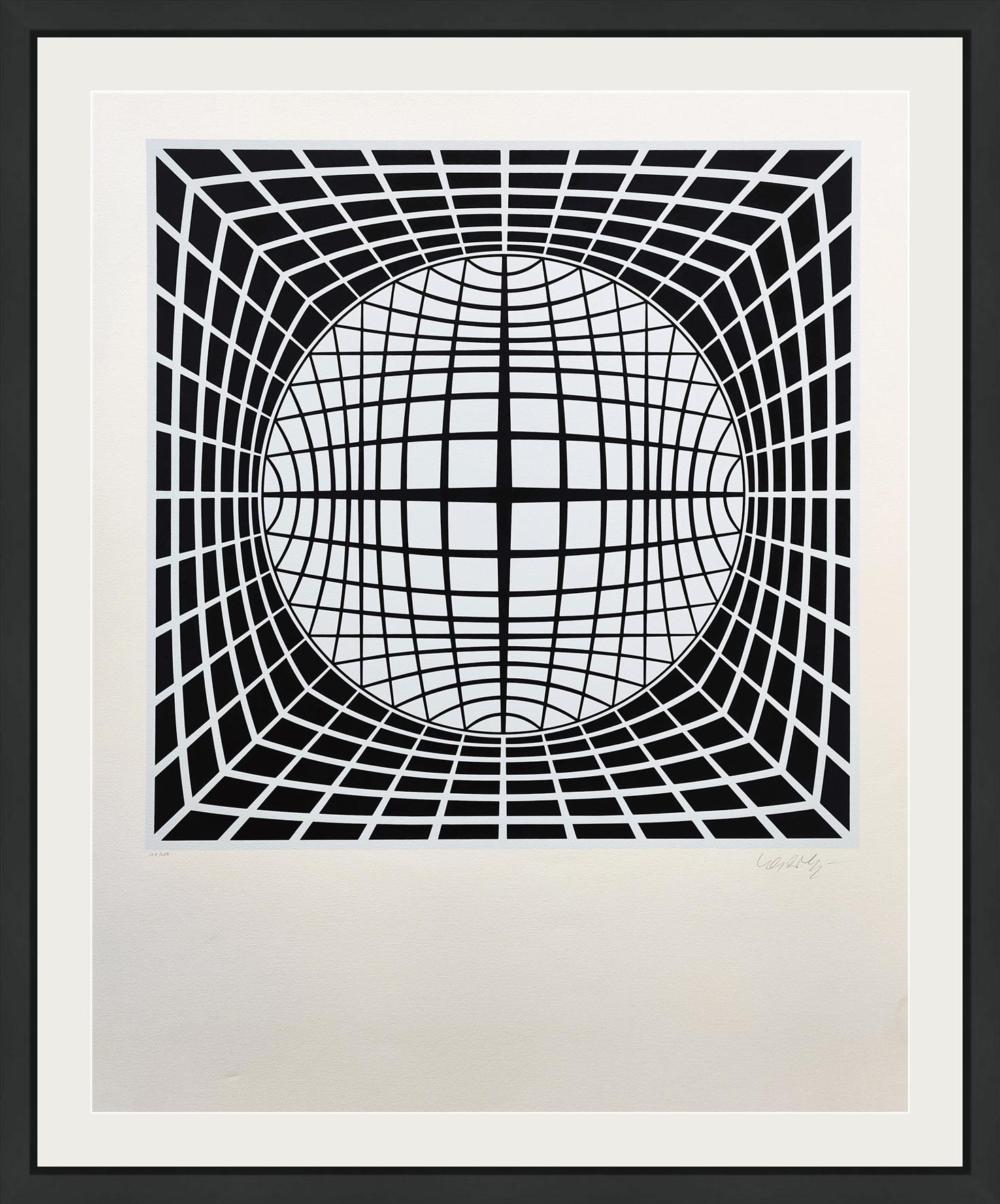 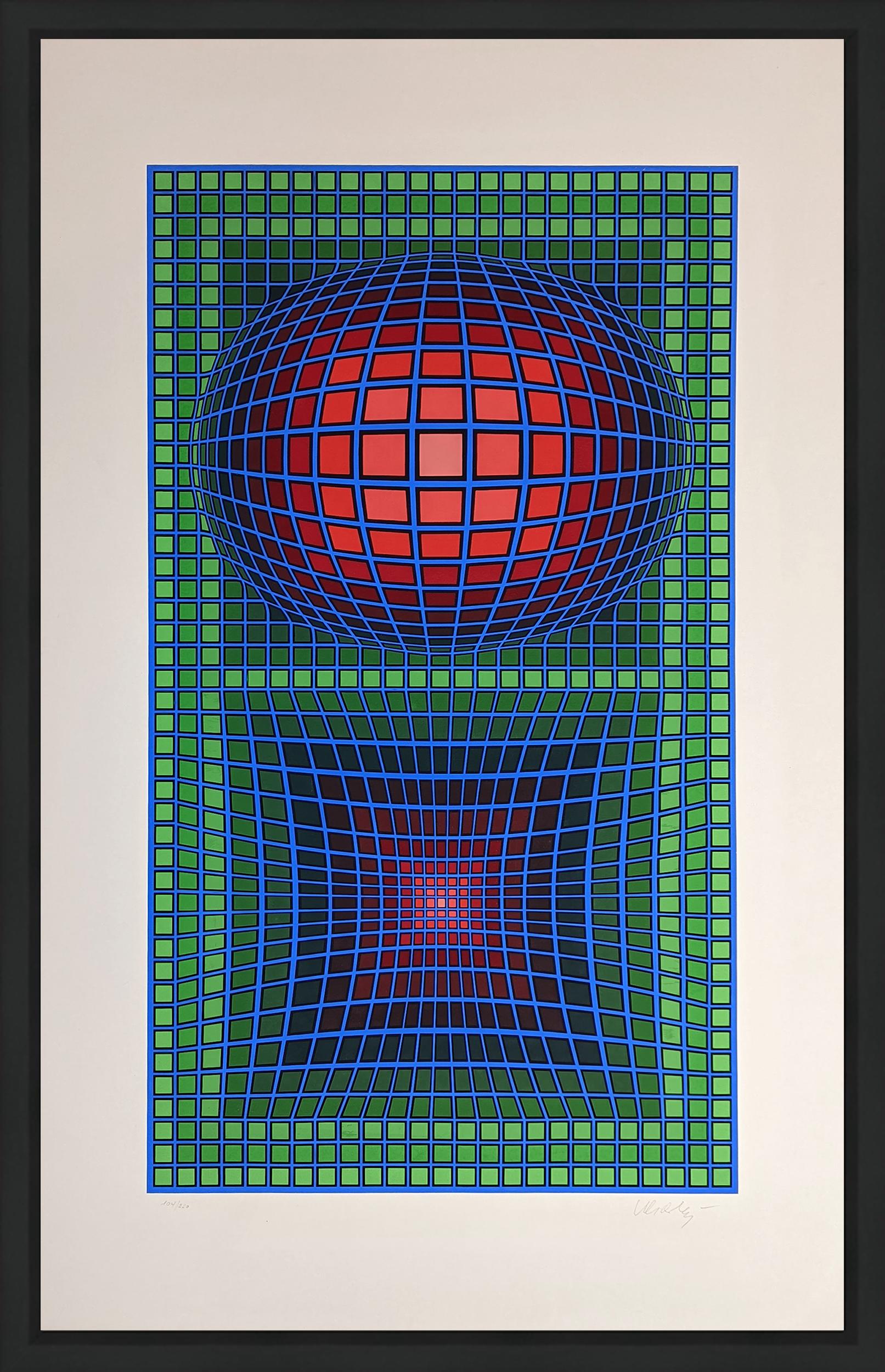 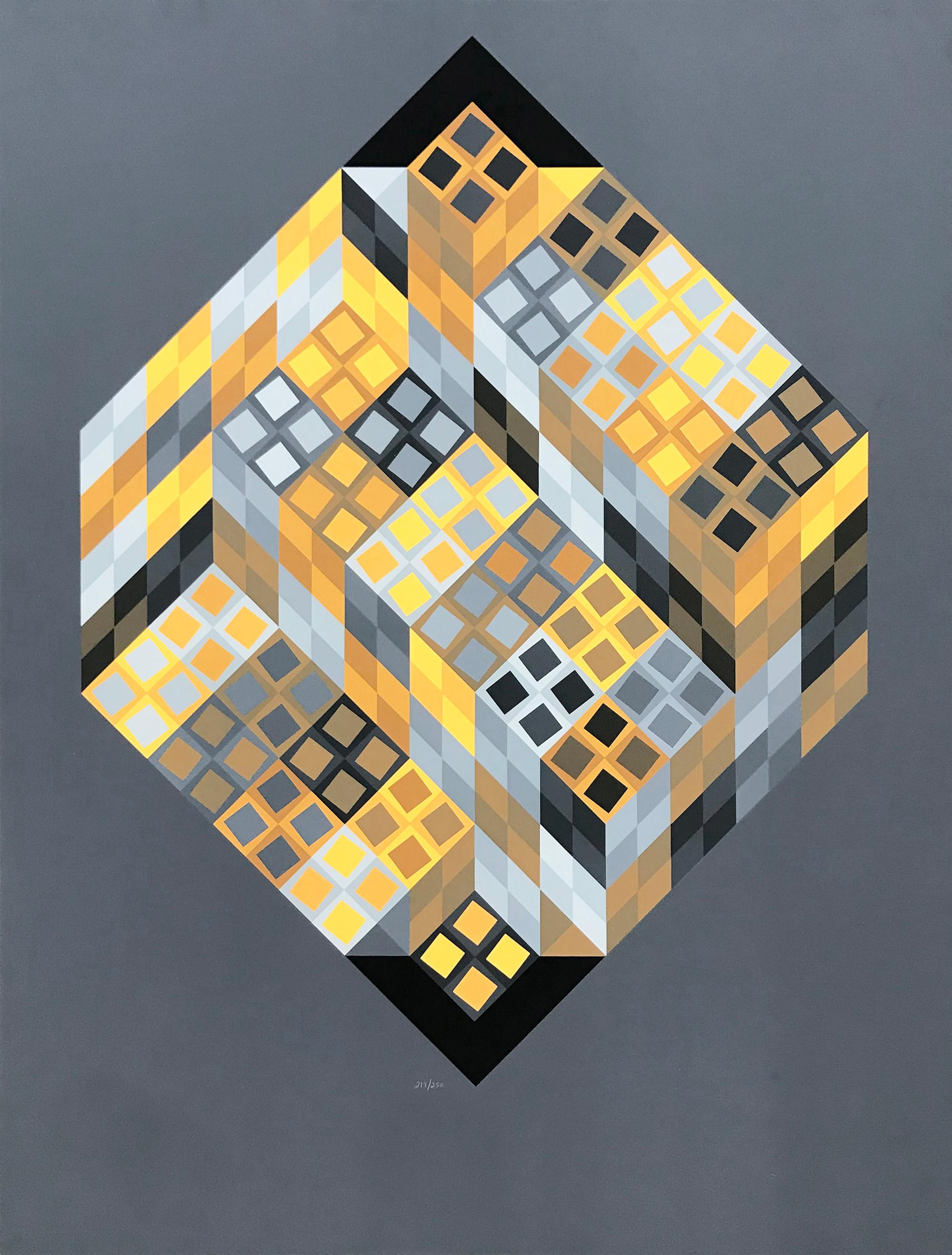 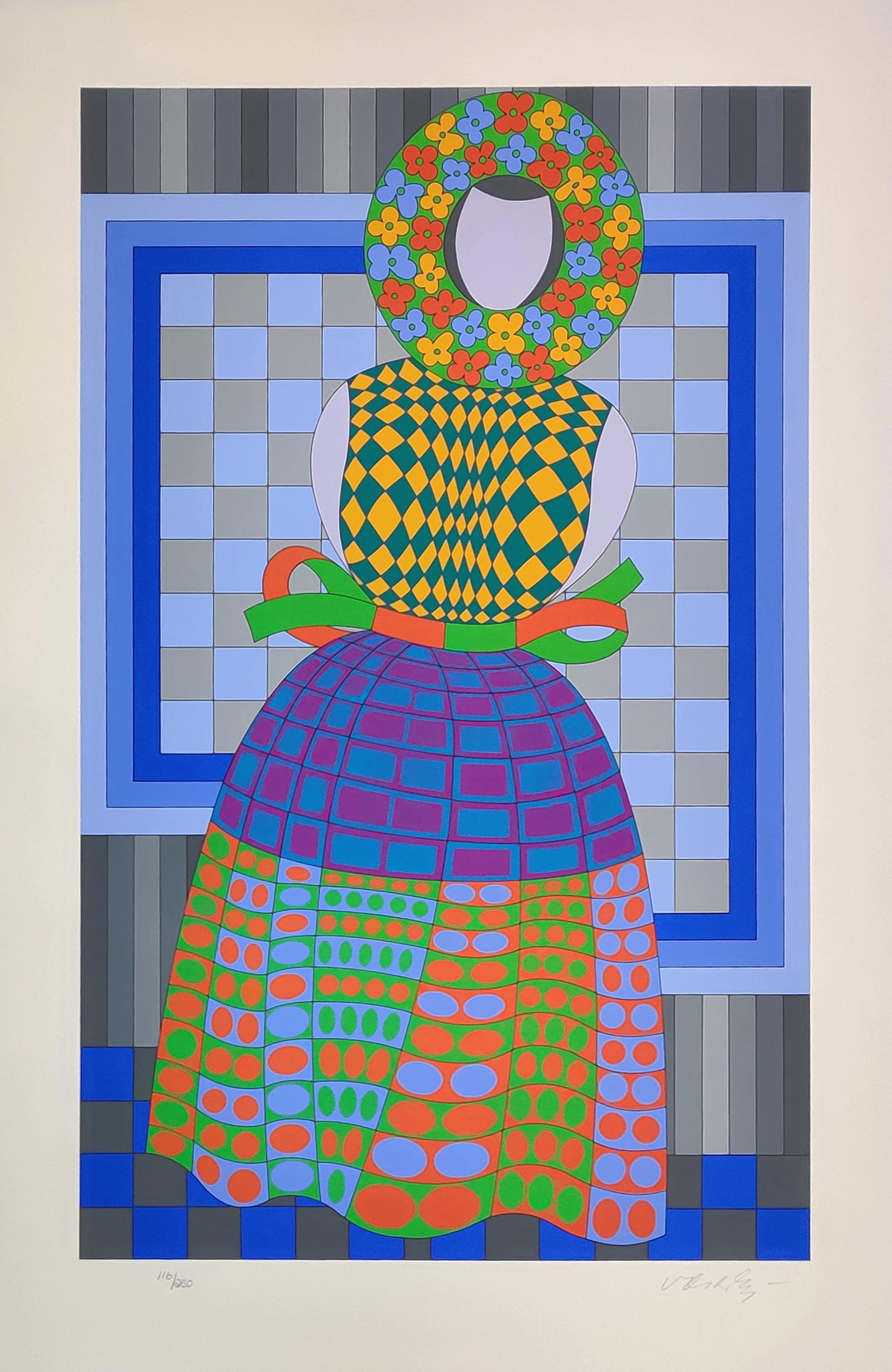 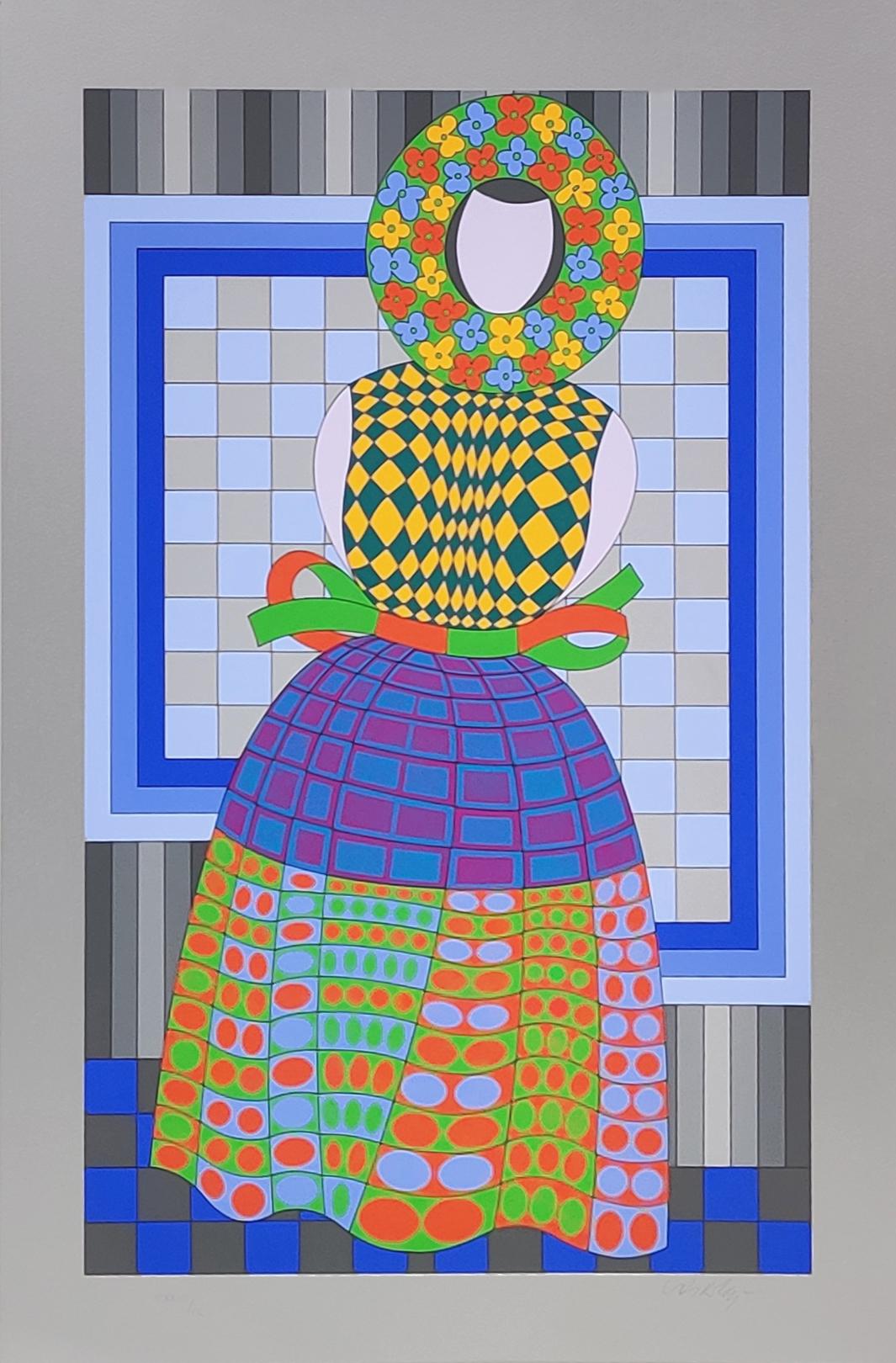 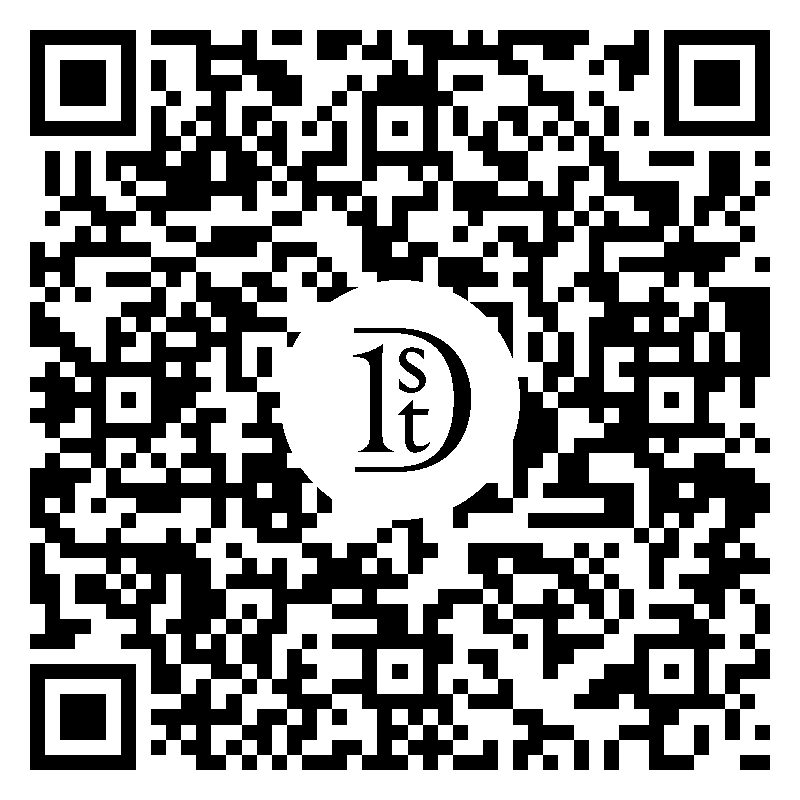 Victor Vasarely born in 1906 was a Hungarian-French artist, who is widely accepted as a "grandfather" and leader of the Op Art movement. Op Art is a form of abstract art that gives the illusion of movement by the precise use of pattern and color, or in which conflicting patterns emerge and overlap. Victor Vasarely and Brigit Riley are its most famous exponents. In its visual balancing act of color and movement from a flat plane to developed continuous flow “Untitled” is a complex arrangement of squares and colors that visually expand and contract. It is one of Vasarely’s most successful Op Art abstract works. The piece is signed on the lower right and number 20/150 on the lower left. The print is behind glass and matted. Vasarely was born in Pecs and grew up in Slovakia and Budapest, where in 1925, he took up medical studies. Abandoning medicine he turned to traditional academic painting at the private Podolini-Volkmann Academy. In 1928/1929, he enrolled at Sandor Bortnyik’s private art school widely recognized as Budapest's centre of Bauhaus studies. His studies concentrated on applied graphic art and typographical design. In 1929, he painted his Blue Study and Green Study. In 1930, he married his fellow student Claire Spinner (1908–1990). Together they had two sons, Andre and Jean-Pierre. Vasarely became a graphic designer and a poster artist during the 1930s combining patterns and organic images with each other. Vasarely utilized geometric shapes and colorful graphics, the artist created compelling illusions of spatial depth, as seen in his work Vega-Nor (1969). Vasarely’s method of painting borrowed from a range of influences, including Bauhaus design principles, Wassily Kandinsky, and Constructivism. In the late 1920s, Vasarely enrolled at the Muhely Academy in Budapest, where the syllabus was largely based on Walter Gropius’s Bauhaus school in Germany. After settling in Paris in 1930, Vasarely worked in advertising agencies to support himself as a graphic artist while creating many works including Zebra (1937), which is considered by some to be one of the earliest examples of Op Art. The artist experimented in a style based in Surrealism and Abstract Expressionism during the 1940s, before arriving at his hallmark checkerboard paintings. During 1947–1951 Vasarely found his own style. The overlapping developments are named after their geographical heritage. Denfert refers to the works influenced by the white tiled walls of the Paris Denfert – Rochereau metro station. Ellipsoid pebbles and shells found during a vacation in 1947 at the Breton coast at Belle Ile inspired him to the Belles-Isles works. Since 1948, Vasarely usually spent his summer months in Gordes in Provence-Alpes-Cote d’Azur. There, the cubic houses led him to the composition of the group of works labelled Gordes/Cristal. He worked on the problem of empty and filled spaces on a flat surface as well as the stereoscopic view. 1965 Vasarely began his series Hommage a l’hexagon, Vega: The Tribute to the hexagon series consisting of endless transformations of indentations and relief adding color variations, creating a perpetual mobile of optical illusion. In 1965 Vasarely was included in the Museum of Modern Art exhibition The Responsive Eye, created under the direction of William C. Seitz. His Vega series plays with spherical swelling grids creating an optical illusion of volume. Vasarely died at age 90 on March 15, 1997 in Paris, France. His works are presently held in the collections of the Albright-Knox Art Gallery in Buffalo, the Art Institute of Chicago, the Tate Gallery in London, and the Peggy Guggenheim Collection in Venice. In 2019, a temporary exhibition of Vasarely's work entitled Le Partage des Formes was displayed in the Centre Georges Pompidou in Paris. 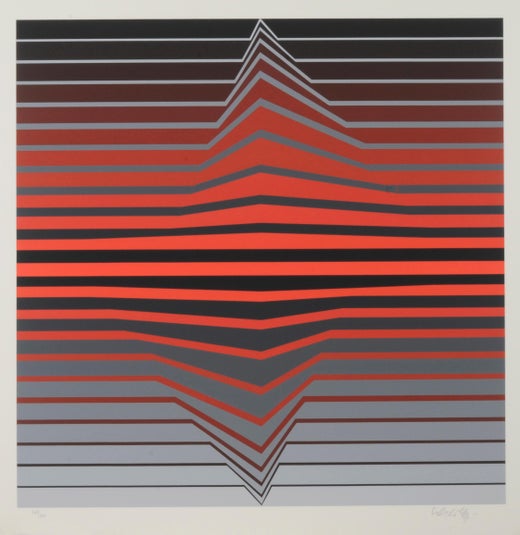 Find a collection of Victor Vasarely prints, paintings, sculptures and other art on 1stDibs.

About the Seller
5.0
Located in Detroit, MI
Vetted Seller
These experienced sellers undergo a comprehensive evaluation by our team of in-house experts.
Established in 2014
1stDibs seller since 2019
71 sales on 1stDibs
Typical response time: 4 hours
More From This Seller

$2,212 Sale Price
43% Off
COMPOSITION
By Victor Vasarely
Located in Aventura, FL
Serigraph on paper. Hand signed and numbered by the artist. Image size 35.5 x 20 inches. Frame size approx 49 x 32 inches. From the edition of 250. Certificate of authenticity i...
Category

$2,962 Sale Price
25% Off
OR-VAR
By Victor Vasarely
Located in Aventura, FL
Serigraph on paper. Hand signed and numbered by the artist. From the edition of 250. Certificate of authenticity included. Artwork in excellent condition. All reasonable offers w...
Category

$2,212 Sale Price
25% Off
USTEOK
By Victor Vasarely
Located in Aventura, FL
Serigraph on paper. Hand signed and numbered by the artist. Artwork size 36 x 18 inches. Frame size approx 49 x 30 inches. From the edition of 200. Certificate of authenticity i...
Category

$2,212 Sale Price
25% Off
Victor Vasarely 'Koska-Sin' Serigraph, 1975
By Victor Vasarely
Located in Delray Beach, FL
Vasarely's 'Koska-Sin' is part of an edition of 125 copies. His work is most known for its style of geometric abstraction; of which Vasarely works in various mediums while only using...
Category

Jean-Michel Basquiat
"Ligaments of the Elbow" plate from the Anatomy Series", 1984