H 7.5 in. W 9.5 in. D 7.5 in.
Large Atomic Jack / Jax Bookend or Doorstop in the Style of Bill Curry
By Bill Curry
Located in San Diego, CA
Vintage atomic era, mid-century modern large iron jack / jax in the style of Bill Curry, circa 1970s. The piece is functional as either a bookend, door stop or decorative accent and ...
Category

H 4.25 in. W 7.5 in. D 5.5 in.
Vintage Large Handmade Iron Jack by Bill Curry
By Bill Curry & Design Line
Located in North Hollywood, CA
Large vintage handmade cast iron Jack, Jax, designed by Bill Curry of Design Line, 1967. This bookend is made of cast iron and is in original condition. Great addition to any decor...
Category

H 7 in. W 6 in. D 6 in.
Large Vintage Handmade Iron Jack by Bill Curry
By Bill Curry & Design Line
Located in North Hollywood, CA
Large vintage handmade cast iron Jack, Jax, designed by Bill Curry of Design Line, 1967. This bookend is made of cast iron and is in original condition. Great addition to any decor...
Category

H 7 in. W 7 in. D 7 in.
Bill Curry Chrome Oversized Jacks Bookends, a Pair
By Bill Curry & Design Line, Bill Curry
Located in Garnerville, NY
Not one, but two! a fun pair of Bill Curry Design Line chrome jacks bookends or paperweights. Circa 1965-70. Good overall condition with wear commensurate with age and use. Minor tar...
Category

H 4.5 in. W 7.5 in. D 6 in.
Bill Curry Lg. Brass Jacks Sculptures / Bookends / Paperweight for Design Line
By Bill Curry & Design Line
Located in Cincinnati, OH
A pair of large scaled cast solid brass Jacks typical for what children used back in the day. A nice accessory for home or office as bookends, paperweights or as sculpture designed b...
Category 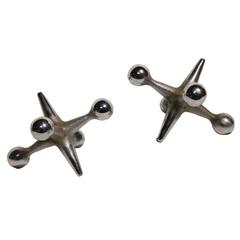 H 6.5 in. W 7.5 in. D 7.5 in.
Mid Century Bill Curry Design Line Jacks Bookends
By Bill Curry, Design Line
Located in San Jose, CA
Mid-Century Modern decorative jack bookends by Bill Curry for Design Line. Each piece is made of heavy cast iron in silver and black. Price is for each. Only one silver jack left. ...
Category

H 4.5 in. W 6.5 in. D 4.5 in.
Pair of Massive Atomic Jacks / Jax Bookends / Doorstop Attributed to Bill Curry
By Bill Curry
Located in San Diego, CA
Pair of massive (9.5") atomic jacks, circa 1960s attributed to Bill Curry. The pieces can be used as bookends, a doorstop or decorative accent. The jacks are extremely heavy and pain...
Category

H 5 in. W 6.50 in. D 7.50 in.
Jack Bookends / Sculptures
By Bill Curry & Design Line
Located in Cincinnati, OH
A pair of heavy satin black iron bookends or sculptures made in extra over sized large , great for coffee table or bookshelf.
Category

H 5 in. W 7.50 in. D 7.50 in.
Brass Jack Bookends By Bill Curry For Design Line
Located in Highland, IN
The oversize jacks Bill Curry designed for his company Design Line in the 60s were not just a handsome and playful accessory, they also relate to the work of pop artists of the perio...
Category

H 7.5 in. W 6.25 in. D 7.5 in.
PAIR OF ORIGINAL BILL CURRY JACKS
Located in Miami, FL
Pair of original Bill Curry cast steel jacks for Design Line created in 1963.Great as a sculpture or as bookends.Nice patina.
Category

H 5.5 in. W 5.5 in. D 4.75 in.
Jax Jack Bookends by Bill Curry in Yellow
By Bill Curry & Design Line
Located in Maastricht, NL
These book ends are made of yellow lacquered cast iron and are in original condition!!
Category

H 4.5 in. W 7.5 in. D 7 in.
Pair of Jack Jax Bookends by Bill Curry for Design Line
By Bill Curry & Design Line
Located in San Diego, CA
Nice vintage pair of bookends door stoppers, by Bill Curry for design line, circa 1950s in nice patinated black and rust orange color, some wear and chips on the painting that gives ...
Category

H 6.5 in. W 7.5 in. D 7.5 in.
Set of Three Large Wood & Brass Atomic Jacks / Jax
By Bill Curry
Located in San Diego, CA
Nice set of three large wood & brass capped atomic jacks / jax in the style of Bill Curry, circa 1980s. The pieces can be used as bookends, a doorstop or decorative accent. The jacks...
Category

How Much are Bill Curry Jacks Bookends?

Finding the Right Bookends for You

A good pair of antique, new or vintage bookends will look wonderful in your reading nook. And the need for these trusty home accents has stood the test of time, which means there are many different kinds to suit any design taste or furniture style.

Bookends weren’t created until the 1870s. Serving faithfully in the background, they went unobserved for a while. The authors of the Oxford English Dictionary report that the term “book end” didn’t appear in printed material until 1907. The primary function of bookends is to ensure that your books remain upright in your bookcase, but style and form have taken the lead over the years. Furniture makers have ensured that bookends demand as much attention as the books themselves. Indeed, while competing with carefully curated first editions or rows of colorful spines is no small task, plenty of bookends steal the stage.

If you’re looking to add a dose of intrigue or decorative flourish to your reading room that will be difficult to ignore, stone bookends and metal bookends can take on the appearance of small, provocative sculptures rather than functional accessories to keep your books orderly on your shelves. Depending on what kind of textures you’re thinking of introducing to your home office or study, a pair of brass bookends or a bronze set will pop against your dusty hardcovers and any decorative objects you’ve accumulated while working to style your bookcase. A pair of mid-century modern bookends carved from dark, exotic woods such as teak can also introduce warmth to a home office or study. While teak was a favorite of designers who worked with furniture in the mid-20th century, all manner of wood bookends have emerged over the years, with some woodworkers carving ornate patterns or figures into their pieces.

Bookworms, take note: You can find an extraordinary range of antique, new and vintage bookends for your dazzling book displays and bookshelves today on 1stDibs.