Price
Item Location
Sort By
Adele Canvas by Greg Frederick, 2022
By Greg Frederick
Located in New York, NY
Created out of vinyl records and their packaging on a 24x24" canvas set in a black floater frame.
Category

H 24 in. W 24 in. D 2 in.
Sade Canvas by Greg Frederick, 2021
By Greg Frederick
Located in New York, NY
Created out of her unplayable vinyl records and their packaging on 48 x 48" canvas set in a white floater frame.
Category

H 48 in. W 48 in. D 2 in.
Tori Amos Canvas by Greg Frederick, 2022
By Greg Frederick
Located in New York, NY
Created out of unplayable vinyl records and their packaging on a 11 x 14 canvas set in a black floater frame
Category

H 14 in. W 11 in. D 2 in.
David Bowie Canvas by Greg Frederick, 2021
By Greg Frederick
Located in New York, NY
Created out of Vinyl records and their packing on 36 x 36 canvas
Category

H 36 in. W 36 in. D 2 in.
Jerry Garcia Wood Panel by Greg Frederick, 2022
By Greg Frederick
Located in New York, NY
Created out of vinyl records and their packaging on a 36 x 36 wood panel
Category 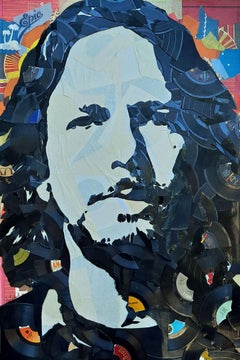 H 36 in. W 24 in. D 2 in.
Frederick Collier, 21st Century, Contemporary, Celebrity, Photography
By Greg Gorman
Located in Munich, DE
Edition 25 A nude male model is standing in in the shade of a blind. From personality portraits and advertising campaigns to magazine layouts and fine art work, Greg Gorman has dev...
Category

H 19.69 in. W 15.75 in.
Madonna
By Greg Frederick
Located in New York, NY
Created out of Madonna’s unplayable vinyl records and their packaging on 48x48" canvas set in a white floater frame.
Category

Finding the Right Mixed Media for You

Mixed media is a type of art that sees artists using a range of materials or more than one medium. Find a range of mixed media paintings and other artworks for your space today on 1stDibs.

Mixed media is distinct from multimedia, which describes art involving electronic media, including video, computers and digital elements. Artists combine painting, drawing, photography and sculpture for mixed media art. Instead of sticking to one form, they aim to break boundaries and create unique pieces. Pop art is one of the vibrant periods for mixed media art, with Jasper Johns and Robert Rauschenberg among its most fabled producers. Rauschenberg, like many mixed media artists, used found objects in his work, from cast-off furniture to newspapers.

Collage is one of the most well-known areas of mixed media. Artists use various types of paper, fabric, photographs and more to create one cohesive work. A type of collage is assemblage, which involves 3D objects.

While artists may use fabric in collage, it can be the very substance of the art itself. Fabric art makes extensive use of texture. Artists may paint or embroider on fabric to create layers of texture and color to evoke a specific feeling. They can also transfer photos onto fabric for innovative ways to display visuals.

Resin-based art has clean, sharp lines and a definitive shape. Resin is a liquid that hardens to a high-gloss surface and is used to seal wood, counters and floors. Resin can also seal artwork, and many artists tint it using pigment powder, ink, spray paint and other vivid materials. If water is added, the resin will turn milky instead of being completely transparent. It’s common for artists working in mixed media to use resin on nontraditional surfaces like glass, wood, metal and stone. This creates a shine that’s perfect to brighten a dull space in the home or office.

Find mixed media paintings and other art for sale on 1stDibs.