Jean Paul Gaultier Dress with Cut out Waist and Hem 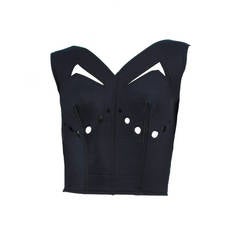 Jean Paul Cut Out For Sale on 1stDibs

You are likely to find exactly the vintage or contemporary jean paul cut out you’re looking for on 1stDibs, as there is a broad range for sale. Many people prefer Black, but fashion is all about individuality — you can find Brown, Beige and more options on these pages. Making the right choice when shopping for a jean paul cut out may mean looking at versions that date from different eras — you can find early iterations from the 20th Century and a newer version made as recently as the 21st Century, both of which have proven very popular over the years. Finding a jean paul cut out for sale for women should be easy, but there are 2 pieces available to browse for men as well.

How Much is a Jean Paul Cut Out?