H 10.01 in. W 7.29 in.
Mirror #6 (from Mirror Series), 1972
By Roy Lichtenstein
Located in Saugatuck, MI
A very rare Roy Lichtenstein limited edition artist proof hand-signed and numbered linocut and screen print inscribed "To Leo" as in Leo Castelli. The work was later purchased by Ge...
Category

H 10 in. W 8 in.
Mirror #7
By Roy Lichtenstein
Located in Miami, FL
From the Edition of 80 This piece is pencil signed, dated and numbered.
Category 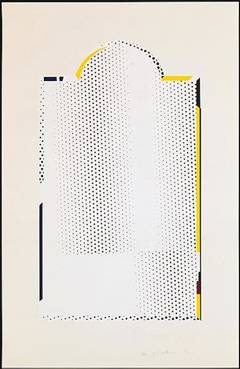 H 33.88 in. W 20.88 in.
Mirror -- Screen Print, Everyday Object, Pop Art by Roy Lichtenstein
By Roy Lichtenstein
Located in London, GB
ROY LICHTENSTEIN Mirror, 1990 Screenprint in colours, on white 4-ply museum board Signed, dated and numbered from the edition of 250 in pencil (there were also 50 artist's proofs) Co...
Category

H 10.01 in. W 7.29 in.
Mirror
By Roy Lichtenstein
Located in London, GB
ROY LICHTENSTEIN Mirror, 1990 Screenprint in colours, on white 4-ply museum board Signed, dated `90' and numbered from the edition of 250 in pencil (there were also 50 artist's proof...
Category 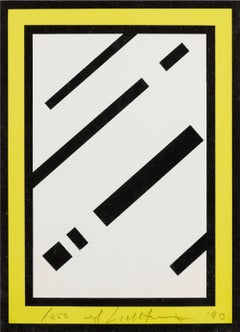 H 39 in. W 25.5 in.
Mirror #2
By Roy Lichtenstein
Located in Santa Monica, CA
Line-cut and screenprint with embossing 28 x 28 inches Edition of 80 Signed, dated and numbered

H 28 in. W 28 in.
Mirror #7, from the Mirror Series
By Roy Lichtenstein
Located in Los Angeles, CA
Edition of 80 plus 10 artist's proofs, RTP, PPII Signed and numbered in pencil
Category

Lichtenstein Mirror For Sale on 1stDibs

Surely you’ll find the exact lichtenstein mirror you’re seeking on 1stDibs — we’ve got a vast assortment for sale. Find Contemporary versions now, or shop for Contemporary creations for a more modern example of these cherished works. When looking for the right lichtenstein mirror for your space, you can search on 1stDibs by color — popular works were created in bold and neutral palettes with elements of beige, white, black and purple. These artworks were handmade with extraordinary care, with artists most often working in screen print, lithograph and linocut. A large lichtenstein mirror can prove too dominant for some spaces — a smaller lichtenstein mirror, measuring 10 high and 7.29 wide, may better suit your needs.

How Much is a Lichtenstein Mirror?

The price for an artwork of this kind can differ depending upon size, time period and other attributes — a lichtenstein mirror in our inventory may begin at $600 and can go as high as $79,975, while the average can fetch as much as $13,995.