H 24 in. W 24 in. D 0.1 in.
The Kingdom, Photograph, Archival Ink Jet
By Richelle Forsey
Located in Yardley, PA
The Kingdom is a photograph of the abandoned St. Joseph Byzantine Catholic Church in Cleveland Ohio taken with a Rolleiflex E2 on Kodak 120mm film. The Church, built in 1913 was cons...
Category

Quarantine Life: Daily Art Project In Shelter-in-Place, 81
By Richelle Gribble
Located in New Orleans, LA
Quarantine Life is a daily art project reflecting on my personal experience during shelter-in-place. Each drawing refers to something I witnessed, felt, experienced, or thought about...
Category 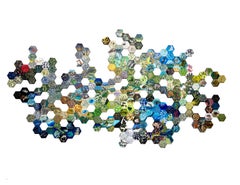 Richelle Gribble
Passing of the Sky, 2017

H 51 in. W 106.5 in.
Overview
By Richelle Gribble
Located in New Orleans, LA
medium: acrylic, chaulk, ink, lava gel, and rubberbands on panel When seeing the Earth – and the networks that connect it – it becomes clearer how an individual can affect it. Ove...
Category

Richelle Gribble
Growth by the River, 2017

H 18 in. W 18 in. D 3 in.
Intertwined
By Richelle Gribble
Located in New Orleans, LA
5 panels; 30 x 24 inches each medium: graphite, ink, charcoal, and watercolor on Stonehenge This set combines our social, environmental, technological, and biological networks to...
Category

Quarantine Life: Daily Art Project In Shelter-in-Place, 56
By Richelle Gribble
Located in New Orleans, LA
Quarantine Life is a daily art project reflecting on my personal experience during shelter-in-place. Each drawing refers to something I witnessed, felt, experienced, or thought about...
Category

Richelle Gribble
Rain in the River, 2017

On 1stDibs, you can find the most appropriate s d richelle for your needs in our varied inventory. In our selection of items, you can find Contemporary examples as well as a Abstract version. Making the right choice when shopping for an s d richelle may mean carefully reviewing examples of this item dating from different eras — you can find an early iteration of this piece from the 20th Century and a newer version made as recently as the 21st Century. When looking for the right s d richelle for your space, you can search on 1stDibs by color — popular works were created in bold and neutral palettes with elements of gray, beige, brown and black. These artworks were handmade with extraordinary care, with artists most often working in paper, ink and graphite. A large s d richelle can be an attractive addition to some spaces, while smaller examples are available — approximately spanning 1.5 high and 3 wide — and may be better suited to a more modest living area.

How Much is an S D Richelle?

Richelle Gribble is a multidisciplinary artist exploring planetary connectivity. Her work examines networks and systems-based investigations to reflect the ways human impact, technology and environment interact and evolve. She is a represented artist with JONATHAN FERRARA GALLERY exhibiting worldwide. Gribble has had solo shows in Los Angeles, New York, Japan, and international orbit around Earth etched on satellites and aboard rockets. She has exhibited at renowned art fairs. including Art Market San Francisco, Texas Contemporary and Miami Project and had her artwork illuminated on a LED screen in Times Square, NYC. Gribble has completed 14 art residencies as part of her project The Nomadic Artist, where she travels the world to reflect social and environmental changes across the globe. Awarded residencies include Vermont Studio Center, Awagami Factory, Kala Fellowship and many more. Work presented in a TEDxTrousdale talk “What is our Role within a Networked Society?” and published in The Creator’s Project, The Atlantic, Artillery Magazine and Vice. She is a writer for the Kepler Space Institute examining the arts and humanities in space and is a Planet Ambassador at Planet Labs, an Earth-imaging satellite company devoted to using space to help life on Earth. A strong advocate for bridging science and art, Gribble leads collaborations across industries with exhibitions at rocket companies, arboretums, bio-laboratories, hospitals, airports and outer space. She founded The Nook Gallery, a gallery devoted to highlighting artists merging science, art and technology. She is a curator and board member for Femmebit, an art and technology festival celebrating women in the video and new media as well as co-coordinates Byte of Science, a monthly lecture series uniting artists and scientists in Los Angeles, California. Gribble earned her BFA in Studio Arts from the Roski School of Art and Design Graduate Studios with dual minors in Social Entrepreneurship and Marketing at the University of Southern California, in 2013.