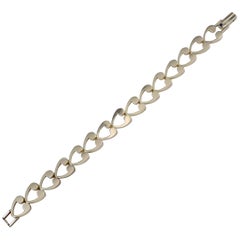 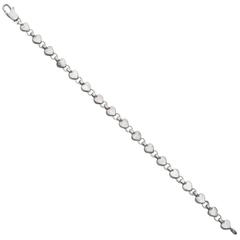 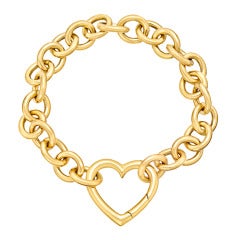 Free Shipping
L 6.75 in.
Tiffany & Co. Gold Heart Bracelet
By Tiffany & Co.
Located in Litchfield, CT
Circa 1990s, 18k, New York. This brilliant everyday bracelet features a heart-shaped clasp paired with a gorgeous heavy link for a look that is classic Tiffany. Originally from the...
Category

TIFFANY & CO Diamond Heart Bracelet
By Tiffany & Co.
Located in New York, NY
TIFFANY & CO 18k gold link bracelet. Each link is a figural heart; the center heart is all over set with fine diamonds.Unusal and orignal design, can be worn alone or would layer bea...
Materials

How Much is a Tiffany Heart Link Bracelet?

Prices for a tiffany heart link bracelet can differ depending upon size, time period and other attributes — at 1stDibs, these accessories begin at $395 and can go as high as $395, while this accessory, on average, fetches $1,800.

Finding the Right Bracelets for You

Bracelets were among the jewels discovered to have been buried with Pharaoh Tutankhamun when his tomb was unearthed in 1922, and wrist and arm bracelets were allegedly worn by Queen Puabi in Sumer, southern Mesopotamia. But preceding the adornments of Ancient Egypt and elsewhere, the people of prehistoric times likely wore the decorative accessory, fashioning it from shells and fish bones. When the Bronze Age allowed for more durable materials and semi-precious stones to be incorporated into jewelry, bracelets became a treasured symbol of wealth. Today, antique and vintage bracelets are versatile and universally loved accessories that can add polish and pizzazz to any ensemble.

In the thousands of years following the debut of the world’s first bracelets, the artistry behind this common adornment has only broadened, with designers at popular jewelry houses growing more venturesome over time. David Webb looked to nature for his Animal Kingdom bracelets, and for her best-selling bracelets and more at Tiffany & Co., Elsa Peretti would frequently do the same. From bangles to tennis bracelets, the modern age offers plenty of options.

Internationally acclaimed bracelet designs have on occasion become emblematic of status, style and, in the case of Cartier's iconic bangle, love. The Cartier Love bracelet can be found on the wish list of most jewelry lovers and on the wrist of some of the world’s biggest stars. Its arrangement of mock screwheads and distinctive functionality — it was initially locked and unlocked with an accompanying vermeil screwdriver — is an enduring expression of loyalty, unity and romance.

While the Love bracelet has played a role in the skyrocketing popularity of cuff-style bracelets, they are far from the only glamorous option for collectors. Make a statement with an Art Deco design, a style that sees all kinds of iterations fitted with studded cuffs, one-of-a-kind shapes and dazzling insets. A chunky gold piece in the Retro style will prove eye-catching and elevate any outfit.

One of the best things about bracelets, however, is that you never have to choose just one. Style icon Jacqueline Kennedy stacked her Croisillon bracelets — designed by Jean Schlumberger for Tiffany & Co. — with such frequency that the ornate bangles were eventually dubbed “Jackie bracelets” by reporters. Contemporary silver pieces can easily complement each other, rendering a layering of luxury almost a necessity.

Find a diverse collection of bracelets that you can sort by style, stone cut and more on 1stDibs.