Price
Item Location
Sort By
Witch (FS II.261)
By Andy Warhol
Located in West Hollywood, CA
Andy Warhol created The Witch in 1981 for his Myths portfolio. It shows The Wicked Witch of the West cackling. Warhol printed the image on a plain purple background and highlights th...
Category 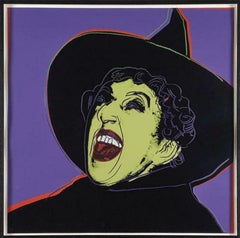 Warhol Witch For Sale on 1stDibs

On 1stDibs, you can find the most appropriate warhol witch for your needs in our varied inventory. Adding a warhol witch to a room that is mostly decorated in warm neutral tones can yield a welcome change — find a piece on 1stDibs that incorporates elements of black and more. Artworks like these — often created in screen print and lithograph — can elevate any room of your home. A large warhol witch can be an attractive addition to some spaces, while smaller examples are available — approximately spanning 7 high and 7 wide — and may be better suited to a more modest living area.

How Much is a Warhol Witch?