Antoine Blanchard was born in France on November 15, 1910, in a small village near the banks of the Loire. He was the eldest of three children and his father, a carver, managed a small carpentry and furniture shop. Blanchard would watch his father hand carve the furniture and began to display an artistic flair early in life and in an effort to promote this talent, his parents sent him to Blois for drawing lessons. He continued his training in Rennes at the Ecole des Beaux-Arts, where he studied sculpture and drawing. Upon completion of his studies, he was awarded the school’s highest award, Le Prix du Ministre. By 1932, he left Rennes and traveled to Paris to study. He enrolled at the Ecole des Beaux-Arts and after a few years entered the competition for the Prix de Rome. It was in Paris that he developed a love for the city and its street life. In 1939, Blanchard married a young woman he met in Paris and in September of that year war broke out and he was called up for service. It was not until 1942, that he would return to his art. His daughter Nicole was born in 1944, it was also around this time that Blanchard's father passed away and he was compelled to return to his hometown and run the family business, giving him little time to paint. His second daughter, Evelyn, was born in 1947 and by 1948, he had given control of the family business to his younger brother and returned to Paris to paint. Contemporary life in Paris had changed and he longed for the bygone days. He began to research the Belle Époque period in Paris, reading and studying all the material on the period he could find. 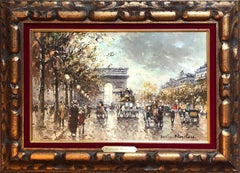 Église de Saint-Germain-des-Prés
By Antoine Blanchard
Located in New York, NY
Provenance H. Arnot, New York Private collection, Chicago This is a very rare and unique scene. According the the experts, this is the only currently known version of this location.
Category

H 19.25 in. W 24.25 in.
Impressionist Paris Street Scene
By Antoine Blanchard
Located in Southport, CT
Antoine Blanchard Antoine Blanchard was born in a village near Blois on the banks of the River Loire in 1910. His father had an important joinery business and was well known in th...
Category