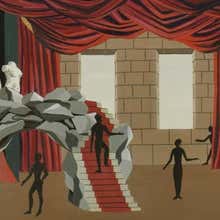 Félix Labisse was a self-taught painter, illustrator and theater designer born in Douai, a small commune in France close to the Belgian border. In Douai, Labisse studied at the Collège Saint Jean and later enrolled at the École de Pêche in Ostend, a city on the Belgian coast. Labisse was closely associated with the Expressionist painter James Ensor, whom he met on a visit to Ostend in 1922. Subsequently, Labisse’s early works are anchored in Flemish Expressionism under the influence of Ensor. In his later works, Labisse developed his own aesthetic, exploring the boundaries between fantasy, ritual, magic and eroticism. He experimented with perspective and used motifs such as naked women and hybrid beasts in fantastical settings. Labisse also met the filmmaker Henri Storck, and they founded the Club du Cinéma d’Ostende, which disseminated avant-garde films by Man Ray, Carl Dreyer and Fritz Lang.

Beginning in 1927, Labisse divided his time between Paris and Ostend, becoming a major French painter. His first exhibition, which gained him critical acclaim, took place at the Ostend Gallery of Modern Art in July 1928. In 1933, Labisse settled in Paris and produced the set and costumes for Autour d’une Mère at the Théâtre de l’Atelier. In Paris, he became part of the Surrealist milieu, meeting André Masson, Max Ernst, Raymond Queneau, René Magritte and Paul Delvaux. It was in 1938 that Labisse fully established his career as a painter after his exhibition at the Palais des Beaux-Arts in Brussels. In 1947, the French filmmaker Alain Resnaise created a short film starring Labisse in his studio titled Visite à Félix. Labisse was also a successful illustrator, producing drawings for the books Le Bain avec Andromède (1944) and Histoire Naturelle (1948) by Robert Desnos. His subjects included creatures such as the cyclops and the medieval French Guivre — a serpentine creature.

By 1951, Labisse moved to Neuilly-sur-Seine, where he would later die. Closely linked to Surrealism — a movement to which he never completely adhered too — Labisse is perhaps most recognized for his 1960s series of austere, blue goddess-like women. Interestingly, his political differences estranged him from the writer André Breton, a communist who was the founder of Surrealism and author of the Surrealist Manifesto. Remaining on the sidelines of Breton’s movement, Labisse continued to explore the limits of his imagination through painting. In 1957, Labisse published his Le Sorcier des Familles: Almanach Fatidique, featuring texts and illustrations in the layout of a calendar. He earned the respect of Breton, who wrote to him: "Beyond what may have sometimes divided us, let me tell you that I greatly appreciate your Sorcier des Familles […] This is a surrealist book, as I see it. My warmest compliments."

Labisse had his first retrospective in July 1960 at Knokke Casino in Belgium, where he exhibited 105 paintings. In 1966, he was elected a member of the Académie des Beaux-Arts in France, and in 1974, he became a member of the jury at the Cannes festival. Labisse maintained a lifelong friendship with Ensor that is immortalized in the painting Bonjour M. Ensor (1964). 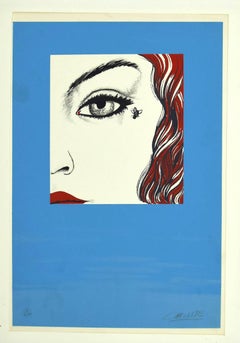 H 13.59 in. W 9.65 in. D 0.04 in.
Horses - Original Screen Print by Franco Badellino - 1970s
Located in Roma, IT
Horses is an original contemporary artwork realized by Franco Badellino in the 1970s. Mixed colored screen print. Hand- signed by the artist on the lower margin. Numbered on the l...
Category

H 26.78 in. W 18.9 in. D 0.04 in.
The Sorrel - Original Screen Print by Gianni Testa - 1986
By Gianni Testa
Located in Roma, IT
The Sorrel is an original print realized by the Italian artist Gianni Testa in 1986. Original mixed colored screen print. Hand-signed by the artist on the lower left. Numbered on...
Category

H 27.56 in. W 39.38 in. D 0.08 in.
Recall - Original Screen Print by Gianni Testa - Late 20th century
By Gianni Testa
Located in Roma, IT
Recall is an original print realized by the Italian artist Gianni Testa in the 20th century. Mixed colored screen print. Hand-signed by the artist on the lower left. Numbered on ...
Category

H 7.88 in. W 5.52 in. D 0.04 in.
Surreal Ram - Original Screen Print by Fabrizio Clerici - 1980s
By Fabrizio Clerici
Located in Roma, IT
Hand-signed and numbered. Edition of 50 prints. In Excellent condition. Wonderful etching, representing a surreal ram in the perfect Clerici's style.
Category

H 27.56 in. W 19.69 in. D 0.04 in.
Man And Dog - 20th Century - Sante Monachesi - Serigraph - Contemporary
By Sante Monachesi
Located in Roma, IT
Man And Dog is an original black and white serigraph realized by Sante Monachesi. Hand-signed in pencil by the artist on the lower right. Artist's proof. Very good conditions.. This...
Category

H 27.56 in. W 19.69 in. D 0.04 in.
The Sorrel - Original Screen Print by Gianni Testa - 1986
By Gianni Testa
Located in Roma, IT
The Sorrel is an original print realized by the Italian artist Gianni Testa in 1986. Original mixed colored screen print. Hand-signed by the artist on the lower left. Numbered on...
Category

1stDibs offers a wide variety of authentic Felix Labisse art for sale. If you are looking for art to add a pop of color to a neutral corner of your living room or bedroom, you can find work that includes elements of blue and other colors. You can also browse by medium to find art by Felix Labisse in screen print, lithograph and more. Much of the original work by this artist or collective was created during the 20th Century and is mostly associated with the Contemporary style. Not every interior allows for large Felix Labisse art, so small editions measuring 8.470000267028809 inches across are available. Customers interested in this artist might also find the work of Maurice Pasternak, Fred Deux and Francis de Saint-Genies. On 1stDibs, the price for these items starts at $288 and tops out at $500, while the average work can sell for $345.

Donald Roller Wilson
When Mrs. Jenkins saw how good Jimmy could do it..., 1988