George Rickey spent over five decades committed to the creation of poetic and precisely-calibrated sculptures that he referred to as his “useless machines.” Of all the natural forces, it was the wind’s movement that most captured Rickey’s imagination. He once wrote, “The artist finds waiting for him, as subject, not the trees, not the flowers, not the landscape, but the waving of branches and the trembling of stems, the piling up or scudding of clouds, the rising and setting and waxing and waning of heavenly bodies.”

Rickey began to devote himself to the investigation of motion in sculpture, producing dynamic works using simple geometric forms such as lines, squares, rectangles, circles, etc., in which his prodigious understanding of engineering and mechanics is demonstrable. Though the works enthusiastically collaborate with the interference of wind currents in their environment, the speed of their random movements are tempered by simple spacing and fixed arrangement of the elements. The relationship of the parts remains the same, but the dance is always changing. It is this tension that defines Rickey’s sculptures. “I think it’s important to make art that you have to wait for,” said the artist. As such, the works are able to oscillate gracefully through an infinite number of compositional iterations, engaging all aspects of the natural world around them—wind, light, rain, fog, or the lack thereof.

Much of Rickey’s work was created in his studio in East Chatham, New York, where he settled in 1960. Prior to that time, the artist had lived and taught in Bloomington, IN; New Orleans, LA; New York, NY, and throughout the Midwest. His childhood, youth and college years were spent in Scotland and Britain. Aside from East Chatham he had studios in Berlin, Germany and Santa Barbara, CA.

Apollo and Daphne
By George Rickey
Located in New York, NY
A superb, richly-inked impression of this extremely scarce, early etching, aquatint and engraving with hand coloring in watercolor on cream wove paper. Colors are strong with crisp, ...
Category 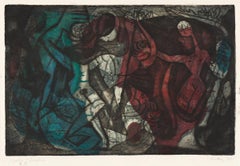 Pencils and Pens
By George Rickey
Located in Fairlawn, OH
Pencils and Pens Graphite on paper, 1987 Signed and dated by the artist lower right (see photo) Rickey's drawing are rare, usually being preliminary designs for his sculptures. A fi...
Category

Marc Chagall
The Trickery of Dorcon

H 22.05 in. W 14.97 in.
Previously Available Items
Two Open Rectangles Up Wall, Mounted
By George Rickey
Located in New York, NY
The international master in kinetic sculpture, George Ricky was a master of balance and movement in stainless steel outdoor and indoor sculptures. He was contemporary artist who is ...
Category

1stDibs offers a wide variety of authentic George Rickey art for sale. Not every interior allows for large George Rickey art, so small editions measuring 10.6899995803833 inches across are available. Those interested in this artist might also find the works of John Henry, Ron Nagle and Theaster Gates. On 1stDibs, the price for these items starts at $NaN and tops at $NaN, while the average work can sell for $NaN.

Two Open Rectangles Up Wall, Mounted
By George Rickey
Located in New York, NY
The international master in kinetic sculpture, George Ricky was a master of balance and movement in stainless steel outdoor and indoor sculptures. He was contemporary artist who is ...
Category

Welcome (Commissioned by Andy Warhol for Winter Olympics 1984, Sarajevo) Hodgkin
By Howard Hodgkin
Located in New York, NY
In 1983, Hodgkin was asked by Andy Warhol to contribute to the official art portfolio of the Olympic Winter games to be held in Sarajevo in 1984. He produced this striking print, wit...
Category

Price Upon Request
“Union" Suite of 3 Limited Edition Hand-Signed Serigraphs by Yaacov Agam, Framed
By Yaacov Agam
Located in Los Angeles, CA
"Union," a suite of three original silkscreens by Yaacov Agam, are pieces for the true collector. Agam is considered the father of Kinetic art. His iconic style is recognizable acros...
Category

$13,000
White Marble＆Stainless Sculpture "Chaos Theory-Conpression", 2020
By Hsu Yun Chin
Located in CLYDEBANK, GB
Hsu Yun Chin is a multi-faceted Artist who lives and works in London. Her background is one that has been immersed in various art forms, most predominantly - though not exclusively -...
Category

$53,500
Original Sculpture TEA CUP Gold and White Steel and Marble Office
Located in London, GB
Made in Ukraine, 2020. This series of sculptures is a tribute to the great importance that simple symbols make in our lives. Can not imagine we will not see these symbols we meet ev...
Category

$500
The Blue Heart
By Jim Dine
Located in New Orleans, LA
Jim Dine (1935) is an artist associated with the Pop Art movement of the 1960s. Many of his works include recurring subjects such as hearts, palettes, and robes, all of which hold si...
Category