The only artist of the New York school to participate directly in European modernism, Hans Hofmann became known as the major exponent of Abstract Expressionism.

Hans Hofmann paintings are known for their manic, exuberant energy. Among 20th-century masters, he was the first to consolidate and codify the lessons of modernism into a teaching system. Hofmann was also a widely influential art instructor with schools in New York City and Provincetown, Massachusetts. He was described by New York Times critic Clement Greenberg as "the most important teacher of our time" (Peter Falk, Who Was Who in American Art). Approximately six-thousand students studied modernist art with him, among the well-known names are Helen Frankenthaler, Jane Freilicher, Wolf Kahn, Larry Rivers and Nell Blaine.

Hofmann was born in Weissenberg, Germany, showed a precocious interest in music and science, and had early training in mechanics while working for the Director of Public Works of Bavaria between 1896 and 1898. On that job, he invented the electromagnetic comptometer, the precursor of the adding machine.

Hofmann began to study art in 1898 in Munich where he was introduced to Impressionism. From 1904 to 1914, he studied in Paris and was exposed to many of the avant-garde artists and movements of that time including Fauvism, Cubism, and Surrealism. He was much taken with the exploration of pure color for its own sake, especially as investigated by Picasso, Braque, Matisse, and Delaunay. In Munich at the outbreak of World War I, he founded an art school and was highly successful until 1932 when he emigrated to America, having spent the summers in 1930 and 1931 teaching at the University of California at Berkeley. In 1932, he began teaching at the Arts Students League in New York and the following year opened his own schools in New York and Provincetown, Massachusetts.

During the 1930s and 1940s, American Scene painting was prevalent, but Hofmann resisted that style, staying with the modernism to which he had been exposed in Europe. Hence he was later credited as a courageous pioneer in America of European modern art. He closed both of his schools in 1958 so he could devote himself full time to his own painting. He died in New York City in 1966.

Hofmann said he always based his paintings on the subject of nature, and he used vivid colors such as bright blues, greens oranges and yellows and applied them with palette knives in long slashing strokes. He viewed the surface of the canvas as alive, responsive, and active, often with opposing forces which he created with his theory of "push and pull," and which is closely tied to theories of Paul Cezanne. He also experimented with dripping paint onto the canvas, a method Jackson Pollock learned and later made famous. 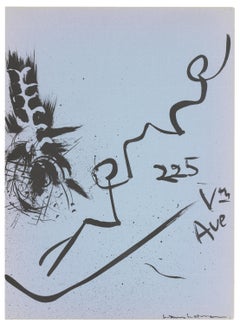 original lithograph
By Hans Hofmann
Located in Henderson, NV
Medium: original lithograph. This lithograph was printed in 1951 for the "Improvisations" portfolio, published by the Artists Equity Association of New York on the occasion of the 19...
Category 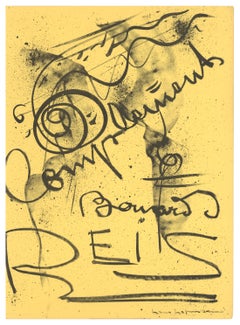 Kootz Gallery, abstraction
By Hans Hofmann
Located in New York, NY
A vibrant, Miro like work celebrating his exhibition at the famous Kootz gallery. This piece serves as historical work and and artistic expression of joie de vivre! In 1947 Hans Ho...
Category

The Climb
By Hans Hofmann
Located in Palm Desert, CA
"The Climb" is a painting by Hans Hofmann. The painting is signed lower right, "Hans Hofmann 60" and inscribed verso, "Cat. #1463 the climb 84 x 48 1960 hans hofmann". The framed pie...
Category

Frédéric Choisel
#7 With a voice one day I'll come back, The Divine Comedy, The Paradise , 2021

H 11.03 in. W 11.03 in.
Beached Sailboats
By Jean-Claude Quilici
Located in Houston, TX
French lithograph of boats at low tide by artist Jean Claude Quilici, circa 1960. Signed lower right. 37/175 Original artwork on paper displayed on a white mat with a gold border. ...
Category

H 24 in. W 30 in. D 0.1 in.
Little Girls - Original Haitian Contemporary Framed Watercolor on Paper
By Micheline Brierre
Located in Haverstraw, NY
The Haitian woman artist Micheline Brierre created this miniature and beautiful watercolor on paper. It is framed under glass and belongs to the private collection of Georges S. Nade...
Category

H 16 in. W 16 in.
46 Years (Tree Rings Series)
By Steven L. Anderson
Located in New York, NY
Steven L. Anderson 46 Years, 2015 marker and pen on paper 9.5 x 7.5 inches The Tree Rings artworks are made on paper which is torn and reassembled, scratched, and sanded. From there...
Category

1stDibs offers a wide variety of authentic Hans Hofmann art for sale. You can also browse by medium to find art by Hans Hofmann in paint, paper, gouache and more. Much of this artist's original work was created during the 20th century and is mostly associated with the abstract style. Not every interior allows for large Hans Hofmann art, so small editions measuring 7.5 inches across are available. Customers who are interested in this artist might also find the works of Bill Jensen, Lena Cher and Angelo Ippolito. On 1stDibs, the price for these items starts at $4,500 and tops out at $105,000, while the average work can sell for $28,000.