Jean Cocteau was a French painter, poet, designer, printmaker, playwright and filmmaker. He is one of the most important figures of French Surrealism, although he always denied being in any way connected to the movement.

Cocteau was born to a socially prominent Parisian family. His father, George Cocteau, was an amateur painter who committed suicide when Jean was only a child. Jean became famous in Bohemian circles as "The Frivolous Prince." In 1912, he collaborated with the Ballets Russes. After World War I, Cocteau met the poet Guillaume Apollinaire and the artist Pablo Picasso. In 1917, thanks to Sergei Diaghilev, a Russian impresario, Cocteau wrote a scenario for the ballet Parade — the set of this important ballet was realized by Pablo Picasso and the music was composed by Erik Satie. In the late 1920s, Cocteau wrote the libretto for Igor Stravinsky’s opera-oratorio Oedipus Rex. In 1918, he met the French poet Raymond Radiguet. They worked and went on many journeys together, and Cocteau promoted his friend's works in his artistic group.

Cocteau is well-known for his novel Les Enfants Terribles (1929) and the films The Blood of a Poet, Beauty and the Beast and Orpheus. During World War II, he created sets for the Théâtre de la Mode. In 1955, he was elected to the Académie Française and the Royal Academy of Science, Letters and Fine Arts of Belgium. He was commander of the Legion of Honour, a member of the Academié Mallarmé, the Academy of Arts (Berlin) and the American Academy of Arts and Sciences. 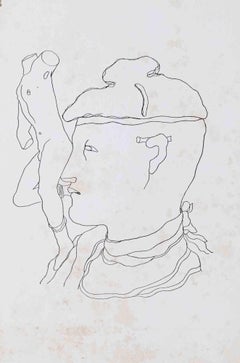 Monaco by Jean Cocteau
By Jean Cocteau
Located in New York, NY
This colorful original lithographic poster by Jean Cocteau was printed at the Atelier Mourlot in 1959. It is signed and dated in the stone by the artist on the bottom righthand corne...
Category

Jean Cocteau prints and multiples for sale on 1stDibs

1stDibs offers a wide variety of authentic Jean Cocteau prints and multiples for sale. If you’re looking for a way to add a pop of color to a neutral corner of your living room or bedroom, you can find work that includes elements of orange, yellow, blue and other colors. You can also browse by medium to find art by Jean Cocteau in ceramic, paper, lithograph and more. Much of the original work by this artist or collective was created during the 20th Century and is mostly associated with the Modern style. Not every interior allows for large Jean Cocteau prints and multiples, so small editions measuring 4.929999828338623 inches across are available. Customers who are interested in this artist might also find the work of Jacques Villon, Bernard Buffet and Georges Braque. On 1stDibs, the price for these items starts at $201 and tops out at $27,616, while the average work can sell for $1,381.