Jerry Malzahn, a talented landscape artist, was born in Stuttgart, Arkansas on September 30, 1946, moving to Texas as a young adult. He earned a bachelor of arts degree from the University of North Texas and founded Malzahn Landscape Company where he currently serves as president. In 1994, at the age of 48, Malzahn began to devote himself to landscape painting. He garnered enthusiastic and immediate response by collecting the first prize for landscape paintings with figures at the l996 Texas State Fair. Malzahn displayed his art in two successful shows at the Wild Gallery in 1996 and David Dike Fine Art in 2003 in Dallas. In 2003, he was selected for membership in the prestigious Salmagundi Club in New York. In 2005, the city of Richardson, Texas held an exhibit of Malzahn’s paintings alongside the personal collection of Jerry and Lyla. The paintings included works by Asher Durand, Díaz de la Peña, Julian Onderdonk and William Keith along with selected landscapes by Malzahn. The exhibit was covered by American Art Review and was viewed by over a thousand visitors. Malzahn’s landscapes are displayed in important private, corporate and public collections in Dallas and Fort Worth, New York and Annapolis, Maryland in the U.S. Naval Academy Museum. In 2008 Malzahn was selected to paint a Christmas ornament for the White House Christmas Tree. Malzahn’s brilliant landscapes pay homage to a wide range of 19th-century landscape masters. His heroic, western landscapes echo the grand panoramas of Thomas Moran and Albert Bierstadt in their scope and strongly articulated perspectives. His meadow scenes carry the delicate and poetic subtlety of the French Barbizon School, particularly the dream-like atmosphere of Corot, Daubigny and Harpignies. While noticing the influence of these artists, one ultimately sees the marks of a highly talented individual hand, sensitive to the nuances of how light and dark effect the mood of nature yet impassioned to capture the great breadth of America’s most exalted scenery. Malzahn died on June 12, 2019, in Texas. 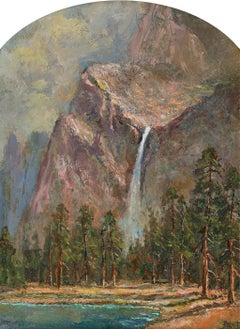 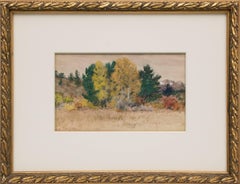 H 35 in. W 47.5 in. D 3.25 in.
Sangre de Cristos (Colorado)
By Jerry Malzahn
Located in Denver, CO
Framed dimensions are 32.25 x 46.25 inches. Provenence: Collection of the Artist Complimentary Shipping within the United States. Contact us for a quote on international shipp...
Category