Josep Guinovart (Barcelona, 1927 - 2007) began working as a painter of murals, posters, and theater decoration and also as the illustrator of the Dau al Set group's magazine.

In 1955, after completing his studies in Paris, thanks to a scholarship given to him by the French Institute, Guinovart founded the group Tahull, along with Antoni Tàpies, Jaume Muxart, Modest Cuixart and Joan Josep Tharrats.

He begins a figurative stage that evolves to a social theme and then to abstraction and informalism. In 1957 Guinovart began to experiment in a style close to assemblage and collage by incorporating into his works objects as boxes, cans, burnt wood or trashed elements.

In the 60's he leaves subjective poetry of informalism and his works are characterized by the expressive content that he tries to convey by signs and colorful strokes.

From 1970 incorporates materials like mud, straw or cement and also makes some works of social and political content. Examples of works from these years are "Earth and Stubble" (1976) or "Stone & Clay" (1977). In 1976 he began his work as an engraver.

In 1982 he received the National Prize of Fine Arts granted by the Spanish government and in 1990 the National d'Arts Plastiques Prize awarded by the Department of Culture of the Generalitat of Catalonia. 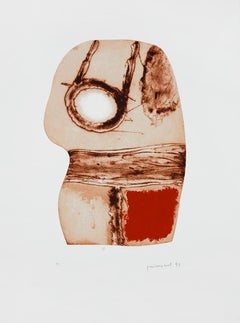 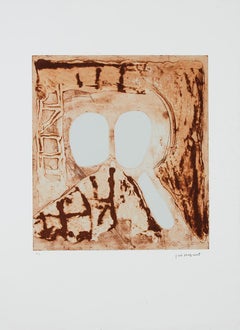 Non title. Original mixed media painting
By Josep Guinovart Bertrán
Located in CORAL GABLES - MIAMI, FL
JOSEP GUINOVART Josep Guinovart i Bertran (Barcelona 1927-2007) was a painter, draftsman and engraver from Catalonia, Spain. After studying at the School of the Lonja and the Promot...
Category