Moshe Elazar Castel was born in Jerusalem, Ottoman Palestine, in 1909, to Rabbi Yehuda Castel and his wife Rachel. The family was descended from Spanish Jews from Castile who immigrated to the Holy Land after the expulsion of the Jews from Spain in 1492. Castel attended his father’s school until the age of 13. He went on to study at the Bezalel Academy of Art and Design in Jerusalem, where he was encouraged by his teacher to study in Paris, furthering his art education at the Académie Julian and École du Louvre in Paris. He was greatly influenced by European masters Rembrandt, Velázquez, Delacroix and Courbet, after spending his days copying their works hanging in the Louvre. Castel returned to Palestine at the onset of WWII. The subject of Castel’s early paintings were scenes of Sephardic Jews in the Holy Land. In 1947, Castel helped to found the New Horizons (Ofakim Hadashim) group, together with Yosef Zaritsky, Yehezkel Streichman, Marcel Janco and others. During the 1950s, his artwork changed style reflecting his inspiration from ancient relief paintings depicting predecessors of the Jewish people. These paintings were surrounded by ancient ruins of basalt stone blocks, which later on became the foundation for his unique artistic technique. In 1955, a solo exhibition of his works was mounted at the Tel Aviv Museum of Art. His murals hang in the Knesset, Binyanei Hauma Convention Center, Rockefeller Center in New York and the official residence of the President of Israel in Jerusalem. In 1959, he purchased a studio in Montparnasse, where he worked for several months a year. Castel used actual ground basalt, mixed with sand and glue, to then form into different shapes, which he then engraved. The engravings, evocative of stone writing tablets, were derived from numerous ancient symbols of Hebrew culture. Moshe Castel produced two major commissions for the Israeli government, consisting of large reliefs in his signature style. A large collection of Mr. Castel’s artwork can be viewed at the Moshe Castel Museum of Art outside of Jerusalem. 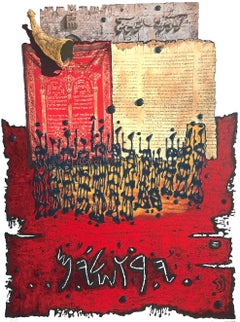 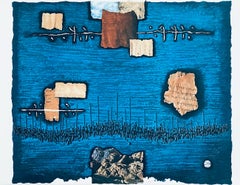 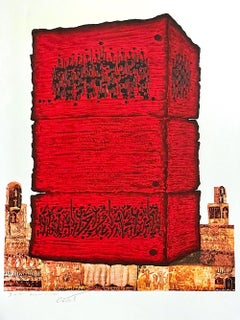 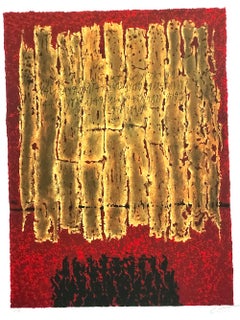 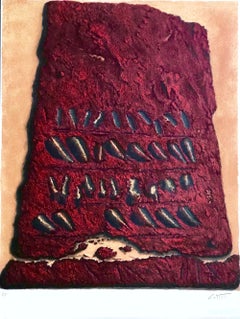 H 21.75 in. W 29.75 in. D .125 in.
Bronze Abstract Verdigris Jerusalem Sculpture Moshe Castel
By Moshe Castel
Located in Bal Harbour, FL
Moshe Elazar Castel born in Jerusalem, Ottoman Palestine, in 1909, to Rabbi Yehuda Castel and his wife Rachel. The family was descended from Spanish Jews from Castile who immigrate...
Category