Norma Bassett Hall was a woodblock printmaker and often depicted landscapes and outdoor scenes. She was one of the founding members of the Prairie Print Makers. Hall was the only woman member of that group and the only one to establish a reputation almost exclusively with color prints. She was born and raised in Halsey, Oregon, on May 21, 1889, and took her first art lessons at the School of the Portland Art Association, where she studied for three years. After graduation, she gave private art lessons. In 1915, she enrolled at the Art Institute of Chicago and graduated in 1918. She was an assistant teacher for one year and met her future husband, Arthur William Hall, who was also a student there and whose studies were interrupted by army service in World War I. Hall worked on defense projects in a drafting office after her graduation until the end of the war. In 1920, she returned to Oregon where she opened a studio in Portland and taught in a high school. Two years later she and Arthur were married. Her interest in woodblock printmaking dated from 1922 when she was in Cannon Beach, Oregon, on a honeymoon trip with Arthur. The couple decided to make a pictorial visit of their trip by copying block prints from a book and she saw what she described as the real possibilities of block printmaking. She used the Oriental method, which is the mixing of dry color with water and rice-flour paste. She had a residency in Kansas in 1923 and furthered her interest and skills in color block prints. She and her husband spent two years in Europe, 1925–27, studying and sketching and spending time in London and Edinburgh, Scotland, where she met Mable Royds, married to etcher E.S. Lumsden. From Royds, she learned the Japanese woodcut print method on rice paper involving transparent watercolors, which for Hall was a redirection from opaque oil-based colors. Adopting this approach exclusively for many years, Hall printed with as many as six or seven colors, each requiring a separate hand-cut woodblock. In 1942, the couple moved to Santa Fe, New Mexico, where her reputation was established for her block prints of the Southwest, especially New Mexico. After a short time, the couple settled in Alcalde, New Mexico, where the couple continued painting and also opened a summer art school. She began to devote a lot of time to serigraphs of local scenes and also did watercolors. The subjects of the totality of her work reflect the wide travels of the Halls and include Kansas-farm scenes, Oregon landscapes, European scenes and New Mexico pueblos. Hall continued to work and teach from their estate in Santa Fe until her death on May 1, 1957. 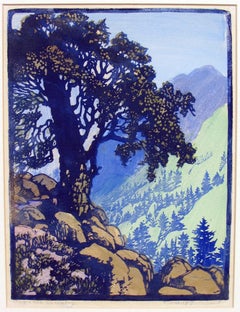 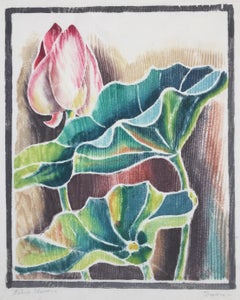 Norma Bassett Hall
"Gate in The Aspens", Circa 1930s

H 20 in. W 25 in. D 3 in.
Aspen and Spruce
By Norma Bassett Hall
Located in Wiscasset, ME
Born in Halsey, Oregon printmaker Norma Bassett Hall studied at the Portland Art Association in Oregon and graduated from the Art Institute of Chicago. Following an artist residency ...
Category