Ralph Rosenborg was an American artist whose paintings were described as both expressionist and abstract. Working amid a critical period in the rise of American modernism, Ralph Rosenborg was a leading contributor to the stylistic development and acceptance of abstract expressionism. A New Yorker until the last few months of life, he was born in Brooklyn on June 9, 1913, to Swedish immigrants. In his youth, he sketched scenes of the Long Island countryside while his mother worked as a domestic cook. During high school, Rosenborg began training in art seriously through the School Art League at the American Museum of Natural History. He went on to study privately from 1930–33 with Henriette Reiss, an associate of Kandinsky. His teacher’s insights into European culture prompted Rosenborg to explore avant-garde developments, causing him to abandon his academic style to explore his interests in gesture and abstraction. While delving into modernism despite the stigma applied to American abstraction at the time, Rosenborg‘s skills were put to use in both the Public Works of Art Project and the Teaching, Easel, and Mural divisions of the Works Progress Administration. While in the Mural division he worked alongside Arshile Gorky and was in the company of modernists such as Ad Reinhardt, William Baziotes and Joseph Stella in the Easel division. After his experience of teaching within the WPA, Rosenborg became part of the original faculty at the Brooklyn Museum School and held positions at New York’s Public Schools 9, 43 and 72, as well as the University of Wyoming and University of North Carolina. From the opening of his first solo show of oils and watercolors at New York’s Eighth Street Playhouse in 1935.

Rosenborg started regularly exhibiting in New York and throughout the country. In 1936, he became a founding member of the American Abstract Artists, participating in the group’s annual exhibitions and contributing to their multifaceted efforts to bring attention to the development of modern art in America. In 1938 he contributed the essay “Non-Objective Creative Expression” to the Yearbook that accompanied the American Abstract Artists’ second annual exhibition at the Gallery of American Fine Arts Society. Rosenborg’s veiled layering of paint and his gestural evocation of landscapes often set his work apart from those he exhibited with. Rosenborg joined The Ten and took part in several exhibitions during his involvement with the AAA’s formation in the late 1930s. Alike to Gottlieb, as well as contemporary Paul Klee, Rosenborg explored the use of symbols and featured hieroglyphics in several works. On the whole, however, Rosenborg’s style was directly based in nature, abstracting landscape forms and developing atmospheric depth in layers of color. His expressionistic take on abstraction relied on sensory impressions, demonstrating the artist’s interaction with reality. Beginning in the late 1930s Rosenborg took up work as a guard for Baroness Hilla Rebay’s Museum of Non-Objective Painting, a position shared by Jackson Pollock. The direction of Rosenberg's paintings soon influenced many artists in his circle, from Pollock to Willem de Kooning and shared with these painters a catharsis and energy of gesture.

Rosenborg’s amassed body of work anticipated the full developments of abstract expressionism for the vigorous and forceful handling of his medium, in which paint was often squeezed directly onto the work’s support. In 1949 and 1950, when abstract expressionism was still in the early stages of becoming a cohesive style, Rosenborg took part in Studio 35, a series of evening discussions on subjects of avant-garde art moderated by Alfred H. Barr Jr., Richard Lippold and Robert Motherwell. In addition to lectures from Jean Arp, Adolph Gottlieb, Jimmy Ernst, Willem de Kooning, Ad Reinhardt, John Cage and Harold Rosenborg, which depended on the interaction of the general public, a closed three-day session was held for the pioneering artistic figures involved in the series. Rosenborg was invited to join participants William Baziotes, Louise Bourgeois, Hans Hofmann, David Hare, Ibram Lassaw, Barnett Newman and David Smith. On the last day’s session, Rosenborg partook in discussions on the possible terms for the arising stylistic movement. Though the descriptions Abstract Symbolist and Abstract Objections were discussed on that day, the group’s work was identified as Abstract Expressionist.

In 1966 Rosenborg traveled to Europe through a grant awarded by the National Council of the Arts. During the 1970s, he became largely reclusive but remained committed to painting. His work was exhibited frequently throughout, including exhibitions hosted by the State Department and U.S. Embassy of Dublin as well as the Butler Institute of American Art. Through the aggressive, intimate handling of his medium and critical leadership among the dominant abstract art groups of New York, Ralph Rosenborg optimizes the bold developments of abstract expressionist art in America. In 1991 after suffering a stroke, Rosenborg and wife Margaret moved to Portland, Oregon, where he died on October 22 of 1992. 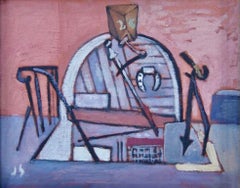 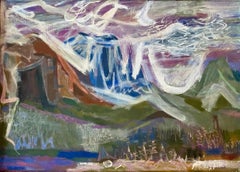