Roland Topor was born in Paris to Polish immigrant parents. He was an illustrator, painter, writer, poet, director, singer, actor and filmmaker. In 1962 he created the Panic Movement (Mouvement panique), with Arrabal, O. Olivier, Jodorowsky and Sternberg, a group that sets his lifestyle on confusion, humor, terror, hazard and euphoria. Topor wrote the novel The Tenant (1964), which was filmed by Roman Polanski as The Tenant (1976). Toper may be best known for his graphic works with their surrealist humor, leaning towards the side of the gruesome mixed with the mundane. He studied at the École des Beaux-Arts in Paris. Topor's artworks have appeared in books, newspapers, posters and film animations. His style in literature, cinema, painting and acting slides toward the surreal macabre and expresses examples of his taste for black comedy. 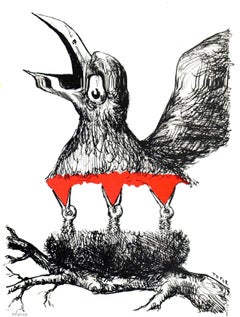 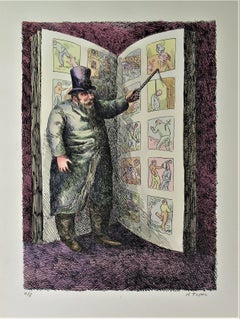 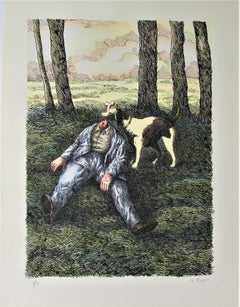