Rose Freymuth-Frazier was born and raised in Nevada City, California - a small gold rush town in the foothills of the Sierra Nevada Mountains. She attended Interlochen Arts Academy, a private boarding arts high school in northern Michigan. Upon graduation she was awarded a scholarship to study theatre at the American Musical and Dramatic Academy in New York City. After completing her training, and a couple of years spent in Hollywood, (which included a stint on a campy, nighttime teen soap opera), Freymuth-Frazier turned her attention to her other interest - figurative oil painting.

Seeking rigorous, technical training that most schools could not offer, she returned to New York City and studied for two years at the Art Students League. After taking a master class at the New York Academy of Art with Steven Assael, she continued her studies in a tradition common to painters of the past, through full-time apprenticeship. Her first apprenticeship was for two years under Assael in his New York City studio and her second was with Odd Nerdrum in Norway, at his farm and studio on the North Sea.

References from a broad swath of art history can be found in Freymuth-Frazier’s solitary subjects. Influences range from Balthus’s discomforting depictions of preadolescence, and the queen of Kitsch, Margaret Keane’s “Big Eyed” children and animals, to the heavy chiaroscuro and technical rigor of Caravaggio and Rembrandt. This unique combination of classicism and pulp results in something of a hybrid between Lowbrow esthetic and Old Master technique.

Freymuth-Frazier’s work has been exhibited internationally with galleries in Barcelona, Sydney, Amsterdam and across the United States from New York City and Chicago to Seattle and Los Angeles. Her work can be found in private collections internationally, including The Seven Bridges Foundation in Connecticut and the John and Diane Marek Collection in Tennessee. She has received attention and reviews from numerous publications including Playboy Magazine, Ms. Magazine, ArtNews, Hi-Fructose Magazine, Beautiful Bizarre Magazine, The Chicago Tribune, Art Papers, American Artist Magazine and The Huffington Post.

(Biography provided by Gallery Victor Armendariz)
Applied Filters13 results
Artist:Rose Freymuth-Frazier
to
Item Location
13
Height
to
Width
to
13
13
13
10,191
2,538
2,439
1,886
12
12
7
7
5
Quiet Evening - Setting Sun and Rising Moon, Reflective and Romantic Colors
By Rose Freymuth-Frazier
Located in Chicago, IL
The sky is in in that in-between stage where the setting sun casts its golden rays upon the sky and the rising moon is peaking through. This combination creates a haze of golds purp...
Category 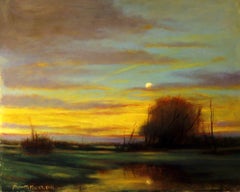 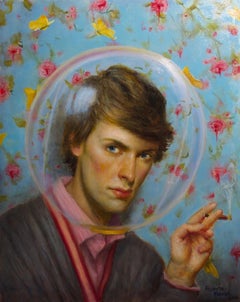 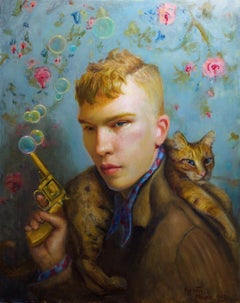 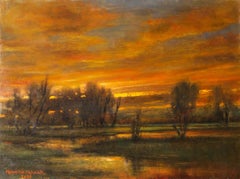 Redheaded Boy, Young Male Portrait w/ Rose and Butterflies, Framed, Oil on Panel
By Rose Freymuth-Frazier
Located in Chicago, IL
This young male fully takes in the intoxicating scent of the rose as noted by his closed eyes. He is seemingly oblivious to the numerous butterflies flitting around him. His soft r...
Category

Previously Available Items
Tangerine Sky - Original Oil Painting Soft Light Reflecting Romantic Colors
By Rose Freymuth-Frazier
Located in Chicago, IL
This beautiful landscape painting depicts the sun setting over a marshy field. The brilliant light of the sun casts its golden rays upon everything it touches, including the tangeri...
Category

Rose Freymuth-Frazier
In Memory of Unicorns, 2013

H 30 in. W 28.5 in.
Blond Boy
By Rose Freymuth-Frazier
Located in Chicago, IL
The loose stokes of the colored pencils used convey a softness in this portrait of a young blond male. The dappled grey toned paper enhances the subtle yellows and blues of this str...
Category