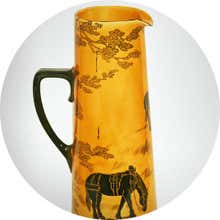 Set of 18 Raised Gilt Encrusted Cobalt Blue Presentation Dinner Plates, Antique
By Royal Doulton
Located in West Palm Beach, FL
An exceptional set of elaborate raised tooled gilding on a rich cobalt blue ground. And we have 18 of them!! A classic shaped Royal Doulton, England design at the height of the Gilde...
Category

Royal Doulton Cut Crystal Vase with Bubbles and Etching, England
By Royal Doulton
Located in Miami, FL
Lovely Royal Doulton finest cut crystal vase with bubbles and criss cross etching. Made in England and marked underneath. The vase is heavy and 5 inches wide at the top.
Category

Royal Doulton Demi-Tasse Vintage
By Royal Doulton
Located in Stamford, CT
Circa 1930s Royal Doulton demi-tasse porcelain service for ten. Some stamped for Tiffany and Co. Made in England. Please note of wear consistent with age including minor losses.
Category

Antique Marion Holbrook Royal Doulton Cobalt Blue & Green Art Pottery Jardinière
By Royal Doulton
Located in Hamilton, Ontario
This antique art pottery was made by the renowned Royal Doulton factory of England in approximately 1900 in the period Edwardian style. This large pot is done in a deep cobalt blue a...
Category

19th Century English Painted Ceramic Barbotine Pitchers, Set of Three
By Royal Doulton
Located in Dallas, TX
Decorate a wet bar with this charming, sculptural set of antique majolica pitchers. Crafted in England circa 1890, each colorful barbotine jug similar to the one of Onnaing, features...
Category

Royal Doulton Bowl and Vase from the Arts and Crafts Period
By Royal Doulton
Located in Austin, TX
A fine decorative ceramic bowl featuring a foliate design around the circumference from the Arts & Crafts period, set upon a fitted round turned wood base, by the celebrated English ...
Category

Royal Doulton Bowl and Vase from the Arts and Crafts Period

Great Quality & Condition Pair of Arts and Crafts Ceramic Vases by Royal Doulton
By Royal Doulton
Located in Lisse, NL
Rare pair of handcrafted, glazed vases. This wonderful pair of early 20th century vases by one of Britain's most famous makers is in the best possible condition. The perfect glazing...
Category

Pair of Royal Doulton Vases from the Arts & Crafts Period, 'Priced as a Pair'

12 Pink Gilt Hand Painted Castle Cabinet Plates. Antique English Artist Signed
By Royal Doulton
Located in West Palm Beach, FL
A vibrant and wonderful collection of antique porcelain plates featuring 12 distinct Great Britain Castles which are labeled on the back of the plates with their hallmarks dating the...
Category

Royal Doulton Jardinière on Stand, circa 1920

Set of 12 English Gilt and Floral Service Dinner Plates, circa 1910

12 Royal Doulton Hand Painted Plates Signed H. Allen Desert Scenes with Camels
By Royal Doulton
Located in Great Barrington, MA
This is one of the rarer subjects painted on any plates and this set of 12 Royal Doulton examples were painted by one of the masters, Harry Allen. Each plate is signed by the artist ...
Category

Edwardian Royal Doulton Stoneware Jug or Pitcher moulded Farming Scene, Ca 1905
By Royal Doulton
Located in Lincoln, Lincolnshire
This is a good stoneware jug or pitcher made by The Royal Doulton, Lambeth, London factory, very early in the 20th century, in the Edwardian period. The jug has a moulded shape with...
Category

Royal Doulton Art Nouveau Vase Decorated by E. Violet Hayward
By Royal Doulton
Located in Los Angeles, CA
An early 20th century art pottery vase from Royal Doulton of England, date marked for the period between 1901 and 1922. The vessel was hand-decorated in the Art Nouveau style by E. V...
Category

Six Royal Doulton Pottery Side Plates in Lynn Art Deco Pattern D5204, circa 1930
By Royal Doulton
Located in Lincoln, Lincolnshire
These are a good set of six side or salad plates decorated in the "LYNN" Art Deco pattern and made by Royal Doulton, England in the early 1930s. The plates are circular and made f...
Category

Royal Doulton Furniture is available for sale on 1stDibs. These distinctive objects are often made of ceramics and are designed with extraordinary care. There are many choices in our Royal Doulton Furniture collection, although brown editions of this piece are particularly popular. There are currently 76 vintage editions of these items in stock, while there is also 0 modern edition to choose from. Many original furniture by Royal Doulton were created in Europe during the 19th century in the Art Nouveau style. Many customers also consider Furniture by James Dixon & Sons, Spode Furniture and Royal Crown Derby Porcelain Furniture if you’re looking for additional options. Prices for Royal Doulton furniture can vary depending on size, time period and other attributes. The price for these items starts at $225 and tops out at $17,500, while pieces like these can sell for $895 on average.