Instantly recognizable by his waxed, upturned mustache, the flamboyant Salvador Dalí is one of modern art’s most distinctive figures. He is also one of the icons of the 20-century avant-garde Surrealist movement, whose dreamlike images, drawn from the depths of the unconscious, he deployed in paintings, sculptures, prints and fashion, as well as in film collaborations with Luis Buñuel and Alfred Hitchcock.

Dalí's use of hyperrealism in conveying Surrealist symbols and concepts that subvert accepted notions of reality is epitomized in what is perhaps his most recognizable painting, The Persistence of Memory (1931), in which he depicts the fluidity of time through melting clocks, their forms inspired by Camembert cheese melting in the sun. His artistic genius, eccentric personality and eternal quest for fame made him a global celebrity.

“Each morning when I awake, I experience again a supreme pleasure,” he once said. “That of being Salvador Dalí.”

La dernier venu de la derniere planete
By Salvador Dalí­
Located in Chatsworth, CA
This piece is an authentic Limoges porcelain plate done in collaboration with Salvador Dali in 1974. It is a part of a series of plates called "La Conquete du Cosmos" that depict im...
Category

La cercle visceral du cosmos
By Salvador Dalí­
Located in Chatsworth, CA
This piece is an authentic Limoges porcelain plate done in collaboration with Salvador Dali in 1974. It is a part of a series of plates called "La Conquete du Cosmos" that depict im...
Category

Infra-terrestres adores par Dali a 5 ans car il se croyait insecte
By Salvador Dalí­
Located in Chatsworth, CA
This piece is an authentic Limoges porcelain plate done in collaboration with Salvador Dali in 1974. It is a part of a series of plates called "La Conquete du Cosmos" that depict im...
Category

Salvador Dalí­
The Eternity of Love from the Trilogy of Love Portfolio, 1976

H 1.19 in. Dm 9.45 in.
Previously Available Items
Complete Set of 1984 Olympic Medallions
By Salvador Dalí­
Located in Chatsworth, CA
This complete set of 11 silver medallions was done by Salvador Dali for the 1984 Olympics in Los Angeles. These medallions were made exclusively for Intercoin, West-Germany. Dali r...
Category

Dm 1.8 in.
Cerberus - Original Woodcut Print by S. Dalì - 1963
By Salvador Dalí­
Located in Roma, IT
Cerberus from the Series "The Divine Comedy" by Dante Alighieri is an original woodcut print by Salvador Dalì, realized in 1963. Good conditions. Not signed. Plate n.6 (as reported...
Category 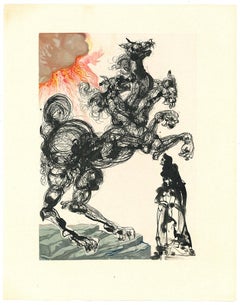 H 13 in. W 10.24 in. D 0.04 in.
Salvador Dali - Menorah - Bronze Guilded Sculpture
By Salvador Dalí­
Located in Collonge Bellerive, Geneve, CH
A Refined Judaica Menorah sculpture of Salvador Dali, Sculpture in Bronze, signed. Signed and Numbered. Edition of 350. Dimensions: 51 x 32 x 12 cm It is considered as one of the m...
Category

H 20.08 in. W 12.6 in. D 4.73 in.
Leviathan - Original Lithograph by Salvador Dalì - 1964
By Salvador Dalí­
Located in Roma, IT
Leviathan is an original artwork realized by Salvador Dalí in 1964. It is part of Biblia Sacra vulgatæ editionis published by Rizzoli-Mediolani between 1967 and 1969. Color lithograp...
Category

H 13.78 in. W 19.1 in. D 0.04 in.
Deux Fatrasies Maquette
By Salvador Dalí­
Located in Wilton, CT
One of the Maquettes for the book- included publishers notes and markings. Comprised of 4 original etchings on Arches paper. Print titles are: “Diogène en son tonneau,” “Le chute d...
Category

H 11.23 in. W 8.86 in.
Dalì Dalì Dalì - New paintings by Salvador Dalì - Vintag Catalogue 1947
By Salvador Dalí­
Located in Roma, IT
Extremely rare catalogue of the exhibition held in Bignou Gallery in New York from November 1947 to January 1948. Beautiful catalogue including some black and white reproductions of ...
Category

Find wide variety of authentic Salvador Dal more art available for sale on 1stDibs. If you’re looking for more art to add a pop of color to a neutral corner of your living room or bedroom, you can find work that includes elements of purple and other colors. You can also browse by medium to find art by Salvador Dalí in ceramic, porcelain, metal and more. Much of this artist's original work was created during the 20th century and is mostly associated with the Surrealist style. Not every interior permits larger Salvador Dal art, so small editions measuring 6.300000190734863 inches across are available. Customers who are interested in this artist might also find and find the work of. On 1stDibs, the price for these items starts at $920 and tops out at $360,000, while the average work can sell for $2,950.