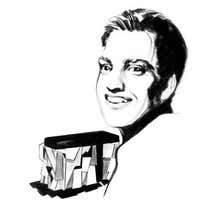 A designer and sculptor, Paul Evans was a wild card of late 20th century modernism. A leading light of the American Studio Furniture movement, Evans’s work manifests a singular aesthetic sense, as well as a seemingly contradictory appreciation for both folk art forms and for new materials and technologies.

Evans’s later work falls into three distinct style groups. His sculpted-bronze pieces, begun in the mid-1960s, show Evans at his most expressive. He employed a technique in which resin is hand-shaped, and later sprayed with a metal coating, allowing for artistic nuance in the making of chairs, tables and case pieces. Later in the decade and into the 1970s, Evans produced his Argente series: consoles and other furniture forms that feature aluminum and pigment-infused metal surfaces welded into abstract organic forms and patterns.

Paul Evans Cityscape Cabinet in Chrome and Burl Patchwork
By Directional, Paul Evans
Located in Highland, IN
This stunning credenza by Paul Evans studio for Directional is from Evans' PE 400 Cityscape series and has the most pleasing composition of walnut burl and chrome patchwork. Of parti...
Category

Paul Evans Studio Wrap-Around Corner Bench and Cabinet, c 1970, Authenticated
By Paul Evans
Located in Los Angeles, CA
This unique and authenticated custom piece was fabricated by Paul Evans and Dorsey Reading as what they considered a 'Studio' piece for Paul Evans Studio, circa 1970, is part of the ...
Category

1973 Paul Evans Floating Cabinet
By Paul Evans
Located in Asbury Park, NJ
A stunning Paul Evans cabinet or credenza adorned in figural burl veneer and mirrored chrome tiles at the back. The cabinet is lifted from the ground on a well proportioned platform ...
Category

Custom Order Paul Evans Steel and Leather Cabinet, Late 1970s
By Paul Evans
Located in Donhead St Mary, Wiltshire
Paul Evans cabinet dating from the mid-1970s was custom made with stitched brown leather sides and base. The top and doors are brushed steel with steel handles. The purchaser will h...
Category

Paul Evans, Argente Wall Mounted Cabinet 'PE-39', USA
By Paul Evans
Located in New York, NY
This hanging cabinet (signed PE 1967) was acquired from a New York collector, along with a corresponding console, and represents the finest condition and preservation possible. Both ...
Category

1stDibs Paul Evans cabinets are available for sale. These distinctive objects are frequently made of metal and designed with extraordinary care. In our collection of Paul Evans cabinets there are many options to choose from, although brown editions of this piece are particularly popular. We stock 36 vintage versions of these items, while there is 0 modern edition to choose from as well. Many of the original cabinets by Paul Evans were created in North America during the 20th century in the Mid-Century Modern style. Many customers also consider cabinets by Florence Knoll, Dunbar and Milo Baughman if you are looking for additional options. Prices for Paul Evans cabinets can vary depending on size, time period and other attributes. The price for these items starts at $4,200 and tops out at $425,000, while pieces like these can sell for $28,000 on average.