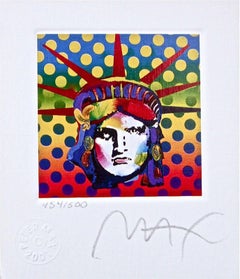 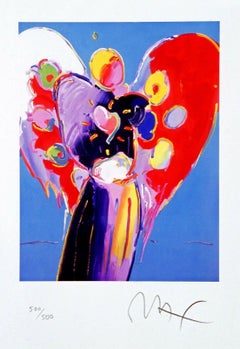 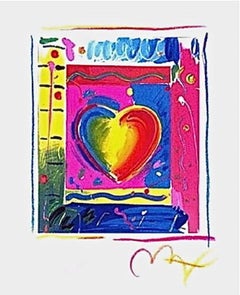 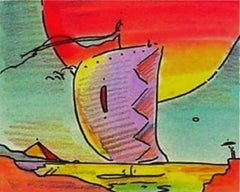 Sailboat Series I, Peter Max - SIGNED
By Peter Max
Located in Mount Clemens, MI
PETER MAX (1937- ) Peter Max has achieved huge success and world-wide recognition for his artistic accomplishments as a multi-dimensional artist. From visionary Pop artist of the 19...
Category

The Mime
By Peter Max
Located in Buffalo, NY
An original contemporary Pop Art lithograph by American Artist Peter Max titled, "The Mime," featuring the classic figural work Max is most known and loved for. This piece was create...
Category

LIBERTY HEAD
By Peter Max
Located in Aventura, FL
Lithograph in colors on paper. Hand signed and numbered by the artist. From the edition of 300. Frame size approx 33 x 33 inches. Artwork is in excellent condition. Certificate ...
Category

Vase with Tree, Peter Max - SIGNED
By Peter Max
Located in Mount Clemens, MI
PETER MAX (1937- ) Peter Max has achieved huge success and world-wide recognition for his artistic accomplishments as a multi-dimensional artist. From visionary Pop artist of the 19...
Category

UNITED WE STAND
By Peter Max
Located in Aventura, FL
Mixed media with acrylic painting and color lithography on paper. Hand-signed in acrylic by the artist. A unique variation. Artwork sheet size 24 x 18 in. Custom framed as pictured. ...
Category

Angel with Saturn, Peter Max - SIGNED
By Peter Max
Located in Mount Clemens, MI
PETER MAX (1937- ) Peter Max has achieved huge success and world-wide recognition for his artistic accomplishments as a multi-dimensional artist. From visionary Pop artist of the 1...
Category

Woman in Love
By Peter Max
Located in San Francisco, CA
This artwork titled "Woman in Love" 2008 is a mixed media on paper (Acrylic painting on lithograph) It is hand signed in acrylic paint at the upper right corner by the artist. The ar...
Category

UMBRELLA MAN WITH PROFILE
By Peter Max
Located in Aventura, FL
Original mixed media and watercolor on paper. Hand signed on front by the artist. Artwork is in excellent condition. Certificate of Authenticity included. All reasonable offers wi...
Category

Sailboat on Horizon, Peter Max - SIGNED
By Peter Max
Located in Mount Clemens, MI
PETER MAX (1937- ) Peter Max has achieved huge success and world-wide recognition for his artistic accomplishments as a multi-dimensional artist. From visionary Pop artist of the 19...
Category

Peter Max Statue of Liberty (Signed, Stamped & Numbered) - Framed Print
By Peter Max
Located in New Orleans, LA
A large, bright, powerful image of the statue of liberty by famous American artist Peter Max. I have included a photo of this same print being offered on Artsy for significantly more...
Category

1stDibs offers a wide variety of authentic Peter Max art for sale. If you're looking for art to add a pop of color to a neutral corner of your living room or bedroom, you can find work that includes elements of red, blue, orange and other colors. You can browse by medium to find art by Peter Max in acrylic paint, lithograph, and more. Much of the original work by this artist or collective was created during the 20th Century and is mostly associated with the Pop Art style. Not every interior allows for large Peter Max art, so small editions measuring 2.430000066757202 inches across are available. Customers interested in this artist might also find the works of Keith Haring, Takashi Murakami and Francisco Nicolás. On 1stDibs, the price for these items starts at $113 and tops out at $90,000, while the average work can sell for $1,259.