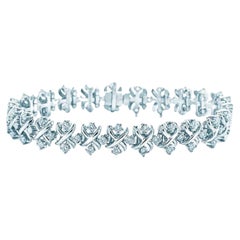 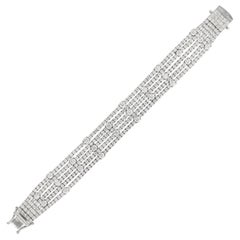 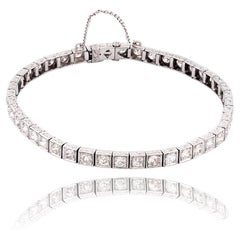 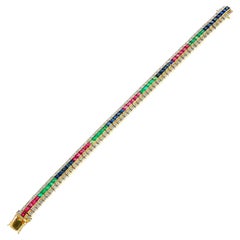 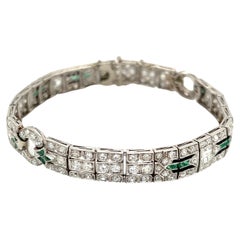 14K Yellow Gold Rainbow Moonstone Bracelet
By VR Jewels
Located in Boston, MA
Bracelets are worn to enhance the look. Women love to look good. It is common to see a woman rocking a lovely gold bracelet on her wrist. A gold gemstone bracelet is the ultimate sta...
Category

90's Turquoise and Diamond Bracelet, with Round Diamond and Turquoise, 18K Gold

Sapphire Gemstone Tennis Bracelet in 18K Yellow Gold with Multi Colors
By VR Jewels
Located in Boston, MA
Bracelets are worn to enhance the look. Women love to look good. It is common to see a woman rocking a lovely gold bracelet on her wrist. A gold gemstone bracelet is the ultimate sta...
Category

4.48 Carats Total Round Diamond Platinum Tennis Bracelet
By Sarosi By Timeless Gems
Located in Los Angeles, CA
This stunning tennis bracelet is set with nearly four and half carats of gorgeous, sparkling diamonds! Set in all platinum, each of the diamonds has been hand-selected and matched fo...
Category

Ceylon Sapphire Tennis or Line Bracelet with Diamond Set Clasp, White Gold
Located in Yorkshire, West Yorkshire
A classic with a difference - a tennis bracelet set with blue sapphires with three brilliant cut diamonds set into the catch. The sapphires, 58 in total, are bright and medium blue...
Category

Free Shipping
18K White Gold Ruby Diamond Bracelet
By VR Jewels
Located in Boston, MA
Bracelets are worn to enhance the look. Women love to look good. It is common to see a woman rocking a lovely gold bracelet on her wrist. A gold gemstone bracelet is the ultimate sta...
Category

14 Karat White Gold 2.34 Carat Round Diamond Tennis Bracelet
Located in Southampton, GB
Many of our items include UK VAT at 20%. This means we may be able to remove this when you are purchasing from outside of the UK. Please message us if you would like to know about a ...
Category

14K Yellow Gold 5 ½ Carat Round and Baguette-Cut Diamond Bracelet
Located in New York, NY
Be a star of the show by wearing this tennis style diamond bracelet. Created with rich 14 karats yellow gold, it is set with shimmering duos of 5 1/2ct round and baguette cut diamond...
Category

Vintage tennis bracelets are a no-brainer for those of us who remain unabashedly nostalgic for 1980s or 1990s fashion. And as long as the casual-luxe look is hot — and it is — these understated accessories will remain on trend.

The term “tennis bracelet” is relatively new. It stems from a tennis match that Chris Evert — the first player to win 1,000 singles matches — played in an early round of the U.S. Open during the late 1970s. A diamond and gold bracelet that the celebrated athlete had been wearing broke, and play was stopped while she scrambled to look for it on the court. At the time, minimalist fine jewelry was the order of the day. While fashion jewelry had undeniable appeal, the ornate diamond confections popular in previous decades were neither suited to the office nor the disco dance floor, and many people sought subtle but sophisticated jewelry designs to wear for both work and play.

Subdued ornament in the manner of Elsa Peretti’s versatile 1970s-era necklaces and bracelets for Tiffany & Co. wowed wearers and garnered media acclaim at the time, and the design of Evert’s subtle straight-line bracelet, the kind that had likely been referred to as an “eternity bracelet” before then, spoke to what was a popular type of jewelry during the era. Demand for versions of Evert’s uncomplicated accessory soared in jewelry boutiques across the United States in the years and decades following the match. The tennis star would eventually earn ninth place on the Tennis Channel’s “100 Greatest of All Time” list.

As elegant as they are versatile, these jewels have become chic staples.