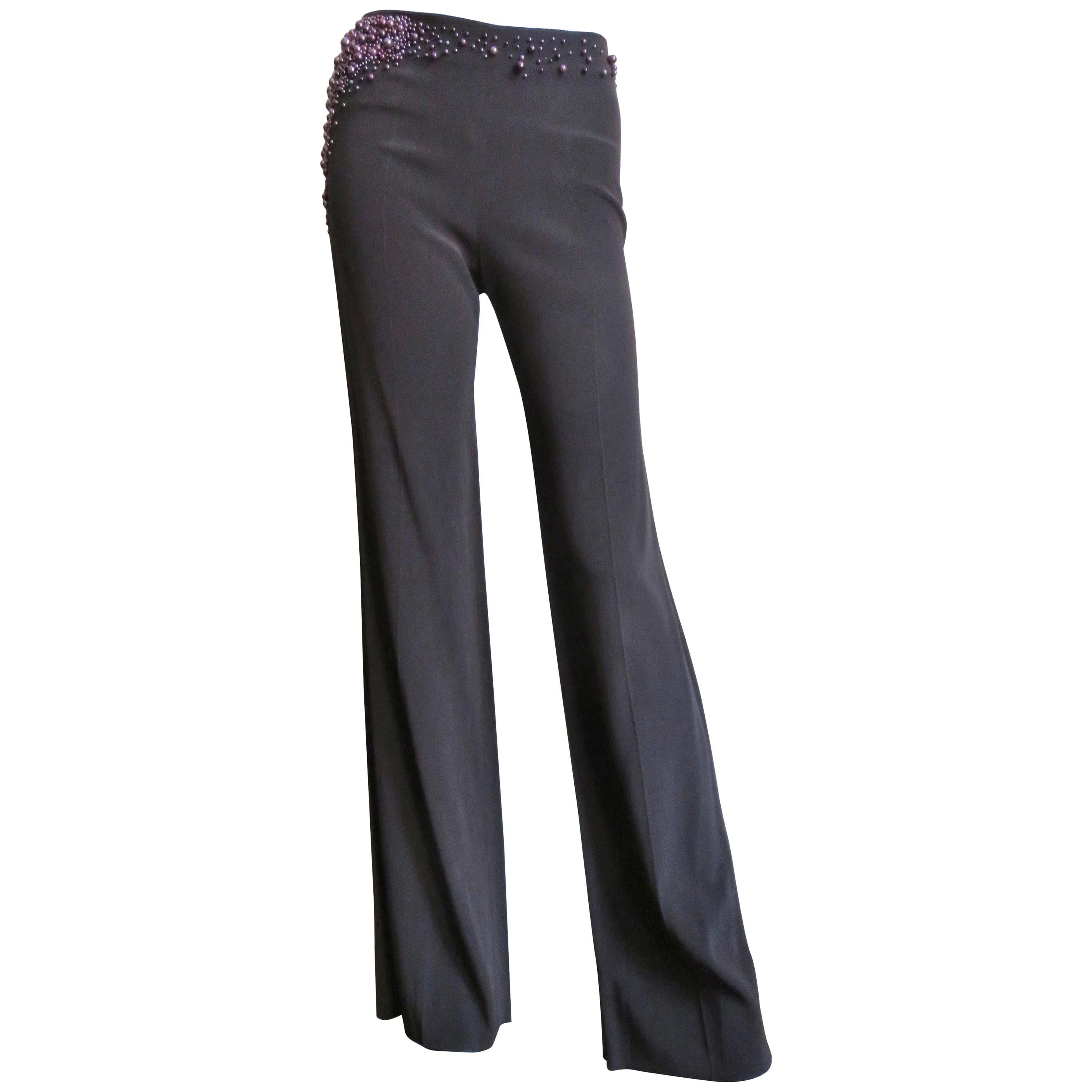 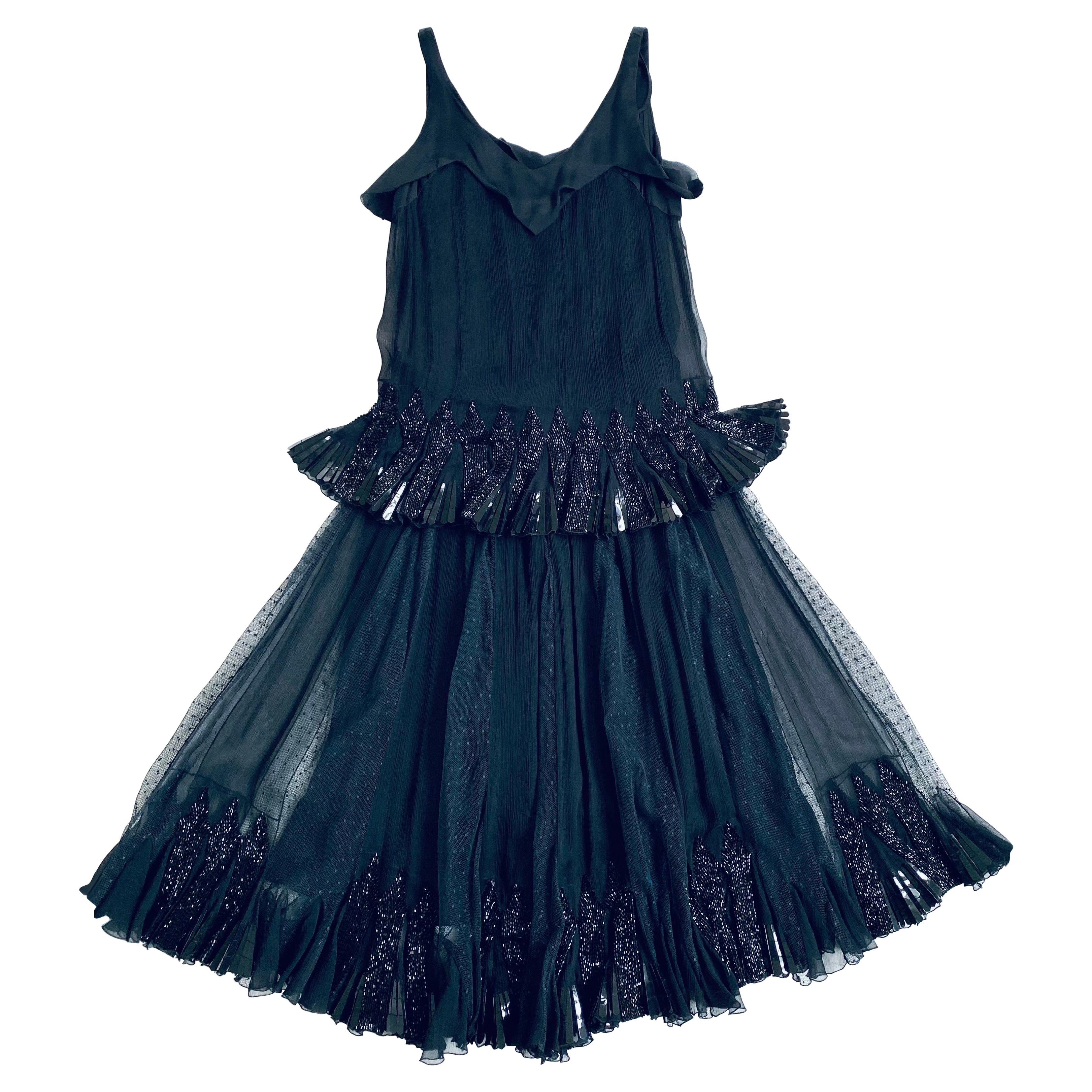 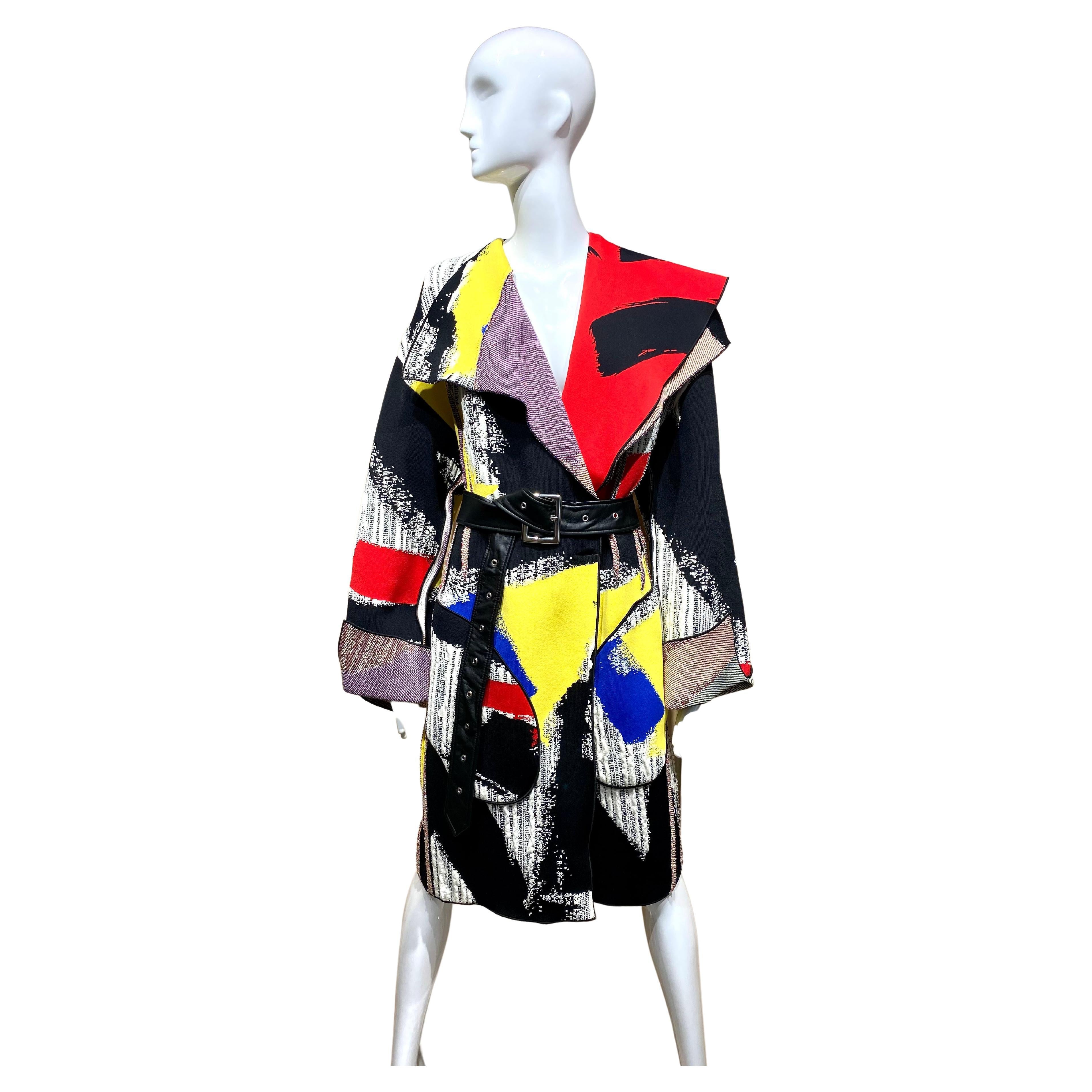 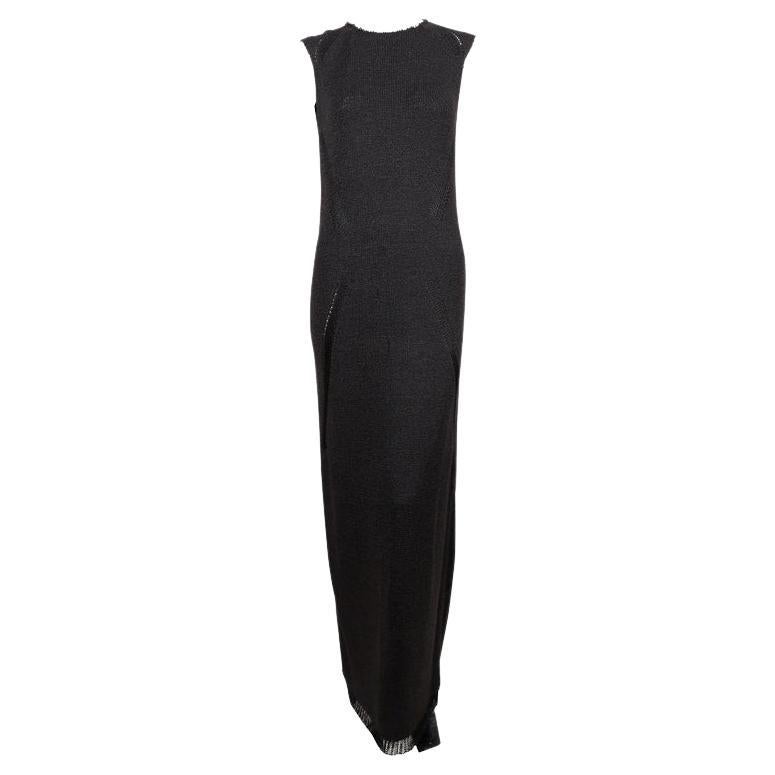 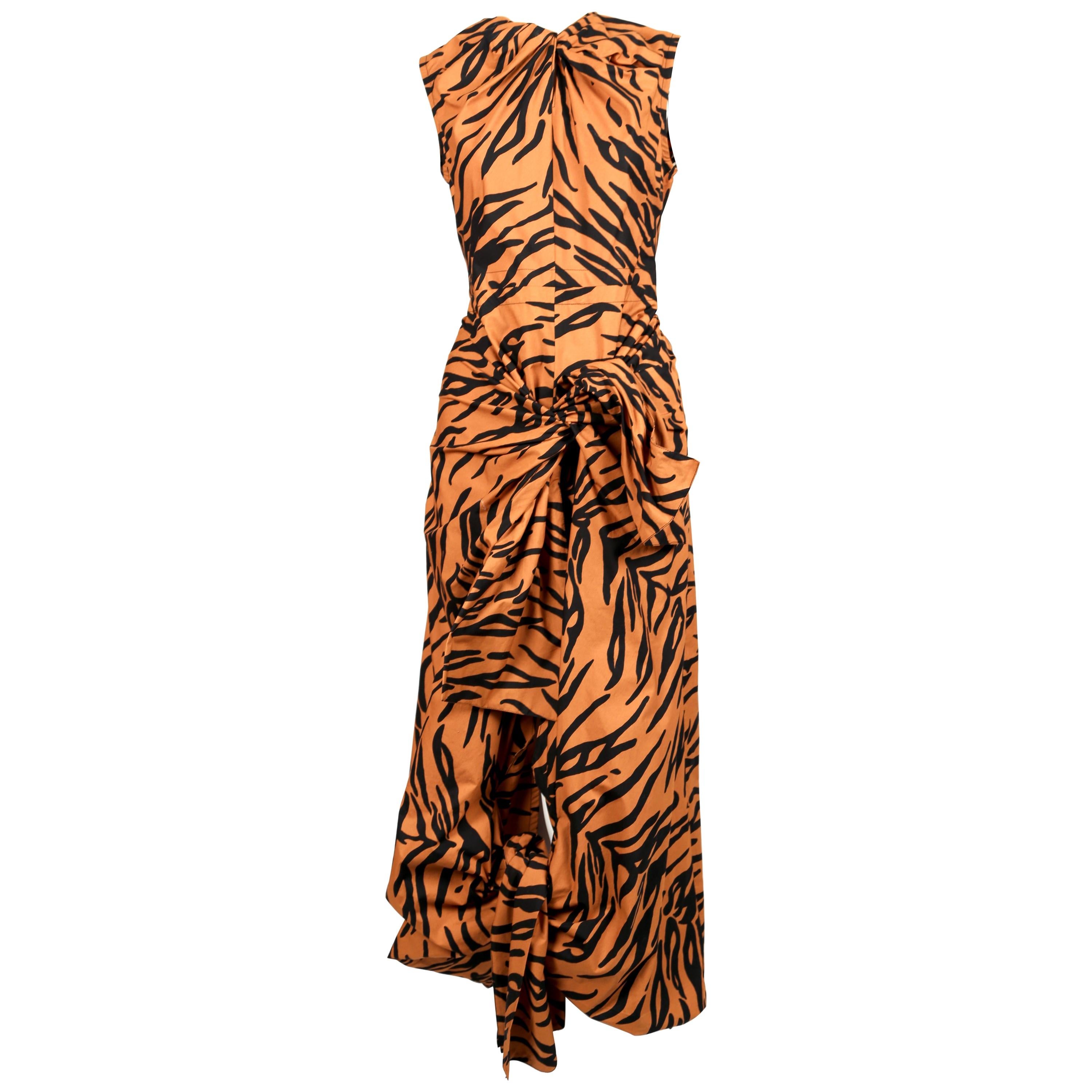 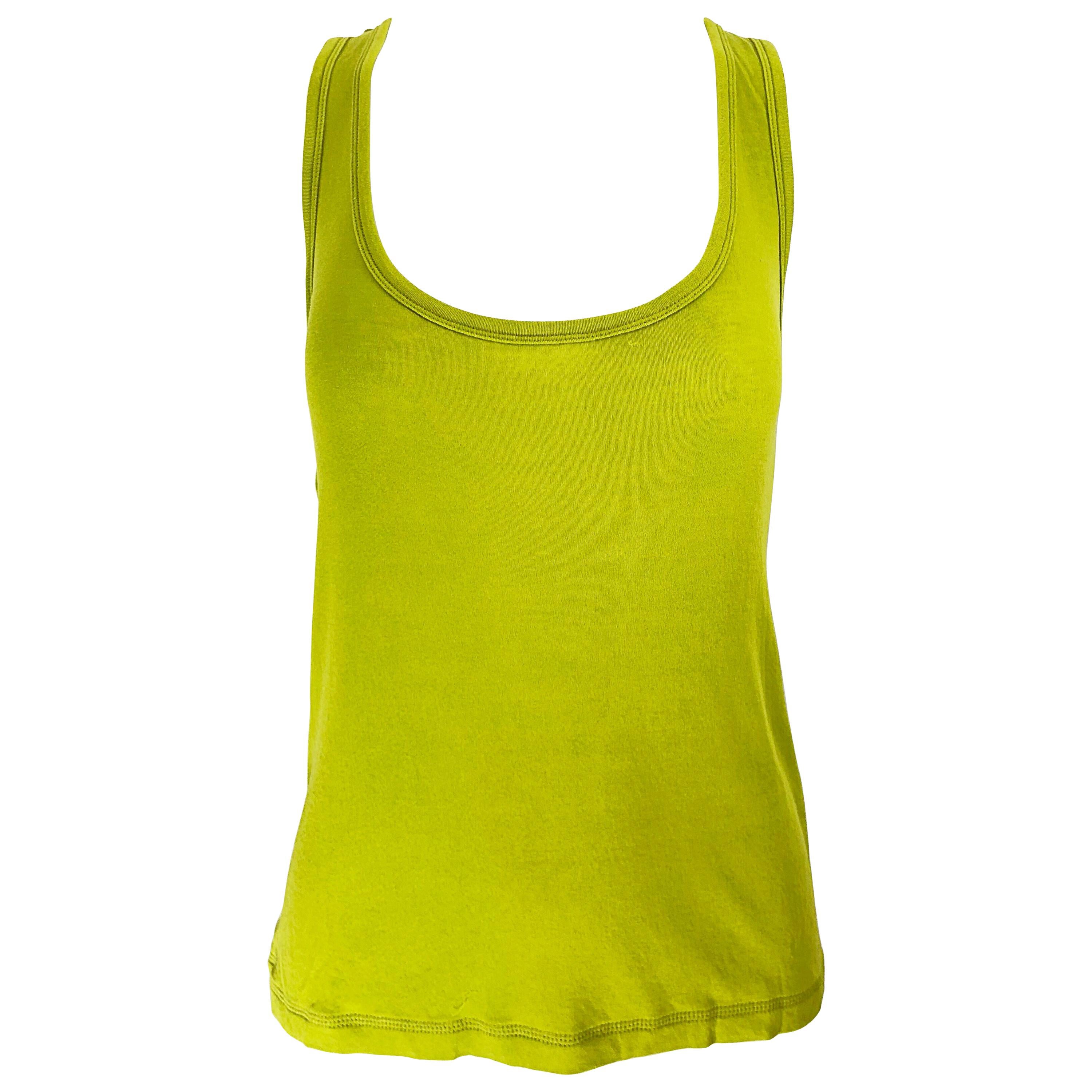 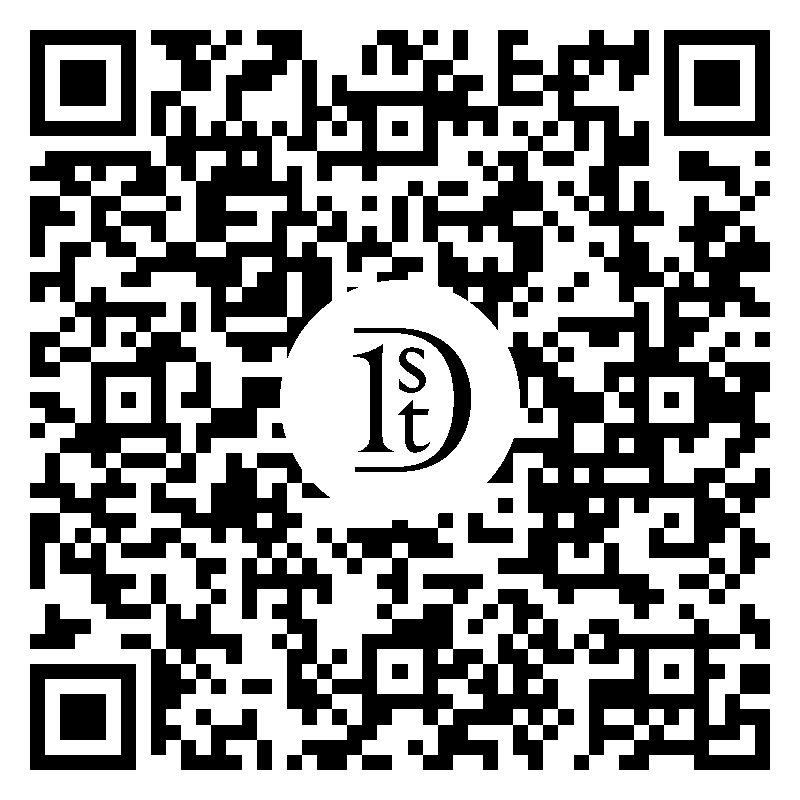 Named “the Chanel of her generation” by the New York Times, designer and fashion icon Phoebe Philo enjoyed a successful run at Chloé, memorably creating a collection of cult handbags among other triumphs. For the Chloé 2005 Fall collection Philo reimagined some of Karl Lagerfeld’s work from the 90s, including some of the most coveted prints he ever produced. As seen as look number 21 on that season’s runway and in the featured images on Diane Kruger, this beautiful dress is every inch the bohemian fantasy. This dress was also seen on the streets of Paris during fashion week in 2005, as reported in an article for Harper’s Bazaar. The abstract, Indian-motif print is based on a print Karl Lagerfeld created for the Chloé 1993 Spring runway, which sold at the renowned Kerry Taylor auction house for 11,000 Pounds in 2020, illustrating the value and collectability of this print. The original designs by Karl Lagerfeld can be seen in the featured images on Kate Moss as photographed by Peter Lindbergh, and on Linda Evangelista, who walked the 1993 Spring runway. Done in silk and lace, the dress features a print of triangles, circles, and abstract shapes in shades of green, red, orange, blue and brown on an ivory ground. The bodice begins with a plunging V shaped sailor neckline and voluminous blouson sleeves with cuffs that extend past the wrists. Sheer lace insets at the sleeves and skirt give this dress a dainty feeling that continues throughout, from the exquisite pleating at the shoulders, skirt, and bodice, to the luminous mother of pearl buttons set along the center front placket. Size: 38 FR Size estimate: SML/MED Measurements: Shoulders: no defined seams Sleeves: 26 inches measured from the neckline side Bust: 38 inches Waist: 30 inches Hips: Full Length: 51 inches At the waist, a belt of the same fabric loops through the sailor collar at the neckline, wrapping around the bodice and cinching the waistline, accentuating the natural lines of the body. The skirt falls in delicate pleats from just below the bust to several inches above the ankles in a high low hem, creating a classic A-line silhouette. The skirt opens in a thigh high slit beneath the center front placket, introducing a welcome risqué element that lends even more movement to the billowy silk fabric. Produced in limited quantities, this dress is highly collectable and is the perfect choice for a summer wedding, gala, or special occasion. This vintage Chloé dress is partially lined and closes with five mother of pearl buttons set along the center front placket. In very good condition with some signs of light wear, this dress has been professionally eco dry cleaned and pressed. High-quality vintage pieces like this are yours to live in and love while increasing in value every year. It’s never too soon to start collecting them, as an investment in your wardrobe—and in yourself. 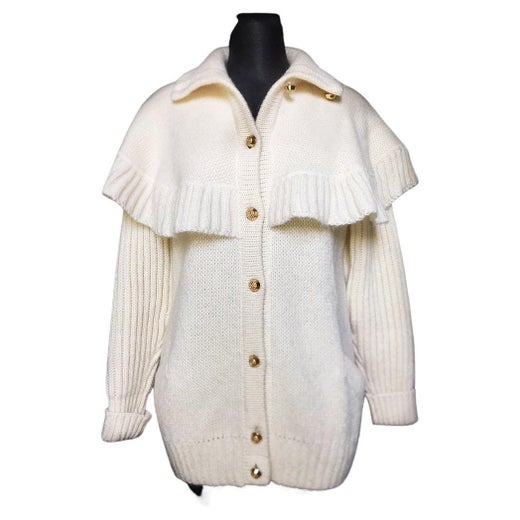 A part of the Left Bank intellectual crowd who shared her mother’s fondness for fashion, Chloé cofounder Gaby Aghion was inspired to empower independent working women to break from the conservative dress of the 1950s and don more free-spirited, feminine designs that were appropriate for both work and social life.

Born in Alexandria, Egypt, Aghion established her fashion house in Paris in 1952 with her business partner Jacques Lenoir to develop her own source of income, separate from her husband’s. She was one of the first designers to embrace the concept of luxury prêt-à-porter as a middle ground between haute couture and off-the-rack for the masses.

In 1964, Aghion hired a fledgling Karl Lagerfeld as a designer. The pair would bring Chloé into the international spotlight with their easy yet glamorous lines that drew such fans as Jacqueline Kennedy. Lagerfeld became the staff creative lead at Chloé in 1974 and stayed with the brand until 1983, during which time he became known for his romantic silk dresses that continued Aghion’s feminine vision and were a favorite of the “rich hippie” set. In 1988, then-unknown designer Martine Sitbon took the helm of Chloé for several years before Lagerfeld returned as creative director from 1992 to 1997, drawing all of the iconic 1990s supermodels to his runway.

After his second departure, Chloé tapped yet another early-career designer to lead the label: a punky 25-year-old Stella McCartney, who earned the position not because of her famous lineage (she’s the daughter of Paul and Linda McCartney), but because of her fashion education at Central Saint Martins and work experience on London’s Savile Row and at Christian Lacroix. Following McCartney’s exit to launch her own line in 2001, Chloé named Phoebe Philo to the post.

Under Philo’s leadership, Chloé expanded from women’s clothing to an accessories line — including handbags — and debuted the legendary Paddington bag in 2004. The padlocked satchel, notorious for weighing a hefty three pounds while empty, became one of the “It bags” of the decade (the brand’s double-handled Marcie holds its own in that regard); the entire 8,000-bag initial production run sold out via preorders.

Philo left Chloé in 2006; her successors include, among others, Clare Waight Kelle and Natacha Ramsay-Levi, who announced that she would be departing the house in late 2020. Part of Chloé’s decades-long lasting influence — which we’d like to speculate would appease Aghion greatly — is the brand’s dedication as a career-launching platform for newbie designers, particularly women.

About the Seller
5.0
Located in Boca Raton, FL
Recognized Seller
These prestigious sellers are industry leaders and represent the highest echelon for item quality and design.
Platinum Seller
These expertly vetted sellers are 1stDibs' most experienced sellers and are rated highest by our customers.
Established in 2014
1stDibs seller since 2014
523 sales on 1stDibs
Typical response time: 4 hours
More From This SellerView All
You May Also Like