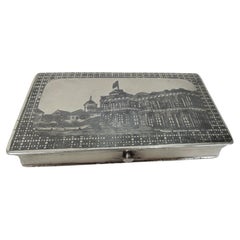 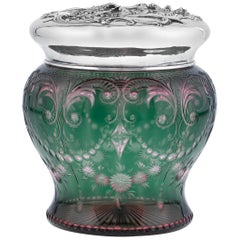 Other Snuff Boxes and Tobacco Boxes 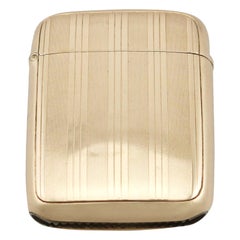 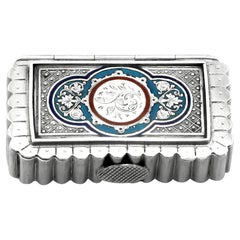 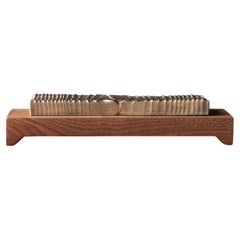 Silver Snuff Box with Map of Denmark, 1960s
Located in Esbjerg, DK
Silver pocket snuff box with a presentation side with a hand engraved map of Denmark. It was made by an unattributed Danish silversmith during the 1960s. It has no markings/hallmarks...
Category

Incense Holder Modern Elm Wood and Polished Bronze Casting by Alabama Sawyer
By Alabama Sawyer
Located in Birmingham, AL
These beautiful incense holders pay homage to a unique natural, salvaged, urban wood as a material and an icon. They are made from cast bronze and urban wood. Elm is a favorite for i...
Category

Louis XV Gold-Mounted Lacquer Snuff Box
Located in Spencertown, NY
The cover and base inset with gouache miniatures of the front and back of a chateau, signed Andre inv. with tortoiseshell lined interior maker's mark JG cross between, Paris, 1762-1768.
Category

French Chinoiserie Hardstone Snuff Box
Located in New Orleans, LA
A marvelously carved chinoiserie motif adorns the lid of this incredible 19th-century French tabatière or snuff box. The charming scene is intricately crafted in the form of a boatin...
Category

Russian Silver-Gilt and Cloisonne Enamel Box
Located in London, GB
The date mark that is stamped on this box is 1894 Assayer's mark AA (Anatoly A Artsybashev). Cover and sides with foliate scrolls in red, white, a gold initial on top,mauve, apple-...
Category

Japanese Gilt Honda Tabako-bon, c. 1900
Located in Chicago, IL
This lacquered box is a Japanese tabako-bon, or 'tobacco tray,' used to store tobacco and smoking accessories. Believed to have evolved from the traditional accessories of Japanese i...
Category

Georgian Tobacco Honesty Box
Located in New Orleans, LA
This rare brass box would have been a coveted contraption in the finest English pubs of the 18th and 19th centuries. Known as an “honesty” box, the rectangular brass box features a d...
Category

Incense Holder Modern White Wood and Antiqued Bronze Casting by Alabama Sawyer
By Alabama Sawyer
Located in Birmingham, AL
These beautiful incense holders pay homage to a unique natural, salvaged, urban wood as a material and an icon. They are made from cast bronze and urban wood. Bleached hackberry is a...
Category

Twenty-Two Miniature Boxes Mounted with Silvered and Gilt Metal
Located in London, GB
This set of 22 boxes contains examples of different sizes and shapes that are produced using different materials and techniques. The boxes contain a variety of stone specimens, such ...
Category

Mid-19th Century Limoges Enamel Flask
By Limoges
Located in Paris, FR
Small flask in Limoges enamel and silver mounts with its original stopper. All of its surfaces are decorated with figures set in a gallant landscape. On the body, a couple of young l...
Category

Agate and Micromosaic Box
Located in New Orleans, LA
Intricate and flawless, the highly detailed micromosaic medallion on the lid of this agate box is an incredible example of this diminutive art form. The elaborate micromosaic depicts...
Category

18th Century Box Martin Varnish and Gold Mount Signed Bardin
Located in Paris, FR
Cylindrical box in Martin varnish and gold mount. The box has two compartments with removable lids. Each lid is decorated with a miniature. On one of the lids, a man in Armor is pres...
Category

Snuff, made of ground tobacco, was especially popular with Europeans in the 1600s. The ornate boxes to keep the powder dry became highly decorative by the 18th century. It was considered a must-have item, particularly for nobility. Today antique snuffboxes and tobacco boxes — as well as other vintage tobacco accessories — are collectibles and charming pieces of decor for any display case or to elevate your bookshelves.

The most important feature of a snuffbox was that it was airtight. The box protected the snuff from oxygen. Another crucial component was the flat lid.

Snuffboxes could be small enough to fit into a pocket or a larger container for communal use at the table. They also came in different shapes. Porcelain containers were prevalent and often designed to look like trunks. Others were oval or square. Boxes made with cowrie shells were rare and more expensive.

Snuffboxes were usually crafted from silver, gold, horn or tortoiseshell. Some of the most prestigious snuffboxes were French tabatières made of gold and sometimes glass. They could be adorned with amethysts, sapphires and diamonds and enameled, engraved or chased.

Sheffield, England, was known for its silver snuffboxes in the late 18th century as its silver-plating technologies perfected these containers. By the early 19th century, the silver industry in Birmingham, England, was producing elegant snuffboxes with images of abbeys and castles on the sides and top.

Another type of tobacco box was the snuff mull or mill. It was made out of horn or an entire ram’s head and topped with a metal lid, frequently featuring engravings and decorative hinges. These were fashionable in Scotland during the 19th century. The origin of its name is unclear.

On 1stDibs, find a plentiful range of antique snuffboxes and tobacco boxes to complement any home decor or furniture style. You can browse the collection by style, which includes Victorian, Georgian and Art Deco, or by material to find pieces in silver and gold.