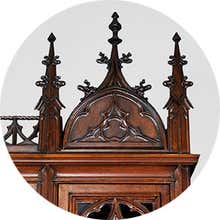 The Gothic Revival movement (also called Victorian Gothic or Neo-Gothic) emerged in Britain in the 1740s, and reached its height in the late-19th century. The style is characterized by such decorative flourishes as pointed arches, floral details, finials, heraldic motifs and linenfold carving. The movement was rooted in religious and social conservatism. Its proponents, who included Charles Barry and A.W.N. Pugin, the architects of London’s Houses of Parliament (designed in 1840), believed that the art and architecture of the Middle Ages were authentically spiritual and inherently moral.

In the United States, the Gothic Revival movement shaped both public buildings and private houses. Numerous American schools were built in the early-19th century in a style now called Collegiate Gothic. Many builders and craftsmen were inspired by Andrew Jackson Downing’s widely read 1850 book Architecture for Country Houses, which posited that a family’s home should exemplify their values — and that the Gothic Revival style was particularly well-suited to scholars and clergymen. Furniture with detailing that mirrored that of Gothic Revival buildings appeared in the same period. Such pieces typically feature dark, intricately carved wood, and upholstery in velvet or leather.

Much like the castle or cathedral that inspired it, a Gothic Revival chair makes a bold design statement. And while you probably don’t have to cross a moat or raise a portcullis to get through your front door, a Gothic Revival piece might make a statement that your home is indeed your castle.

A rare continental Alms Box, probably from Germany
Located in San Francisco, CA
Wonderful treen and wrought iron alms box with functioning lock in all original condition. The cylindrical form with turning wheel decorations, the ironwork a little loose due to ...
Category

Mid-19th Century French Patinated Bronze Mortar with Original Pestle
Located in Dallas, TX
Grind spices in your kitchen with this beautifully carved, antique mortar; crafted in France, circa 1850, and made of bronze, the bowl is round in shape with a wide mouth at the top,...
Category

19th Century French Black and Silver Cast Iron Hobnail Studded Safe
Located in Dallas, TX
Keep your jewelry or important documents locked up in this small antique safe from the Champagne-Ardenne region of France. Crafted, circa 1880, the safe is cast iron and has a chic t...
Category

Romantic Pair of Giltiron Italian Candlesticks
Located in Hopewell, NJ
A romantic vintage pair of Italian giltiron candlesticks having a gothic feel with crown like tops and leafy columns.
Category

Neo-Gothic Walnut Wood Table Trunk from France, circa 1860
Located in Dallas, TX
This fabulous table top trunk is Neo-Gothic in style. It is from France and dates to circa 1860. The top has an incised neo-gothic motif with a patterned ground beneath the individua...
Category

Antique Gothic Carved Limestone Model of a Madonna or Venus
Located in Philadelphia, PA
A fine antique limestone carving. Modeled as a Madonna. With her head slightly tilted, holding an orb in one hand, and with her other hand resting on her breast. By repute ...
Category

Antique Gothic Carved Limestone Model of a Madonna or Venus

19th Century Moroccan Gothic Repousse Silver and Gilt Copper Treasure Chest
Located in Dallas, TX
This elegant antique chest was crafted in Morocco circa 1850. Bombe in shape and built of wood with copper, the trunk with bronze side handles, is decorated with repousse motifs thro...
Category

Antique Lifesize Mary and Child Jesus Gothic Revival Wooden Church Sculpture
Located in Lisse, NL
Hand carved antique statue of Mother Mary wearing a Gothic crown. This original and all hand carved sculpture of the mother of all mothers is another one of our very special offerin...
Category

Great Quality Carved & Superb Condition Wooden Corpus Christi on Crucifix, 1800s
Located in Lisse, NL
Antique crucifix with stunning hand carved details and an amazing patina. This remarkable and sizeable sculpture of a suffering Christ on the cross is different to almost all others...
Category

Rare Early 19th Century French Vampire Stone Boss Fragment
Located in London, GB
Rare early 19th century stone boss We are proud to offer one of the most unusual examples of a European hand carved stone boss. In the form of a vampire / grotesque. The paint is c...
Category

English Early 18th Century Forged Iron Candelabra
Located in Baton Rouge, LA
A spectacular hand-forged iron candelabra, made in England circa 1700. The fixture will hold seven candles, arranged in a triangular fashion. Sourced from an English church, the anti...
Category

Saint Sebastian Wood Carved Sculpture, 16th Century Lower Rhine
Located in Bamberg, DE
Lower Rhine Master, c. 1520 A fully sculpted sculpture of the saint carved from oak. Whereas in the representations handed down from the Gothic period the main focus was still on th...
Category

Rare and Remarkable Corpus Christi on a Decorated Wooden Cross with a Skull
Located in Antwerp, BE
19th century crucifix or corpus Christi made from wood. Wooden cross with a nice patina and an exquisite shape. This item depicts the Christ in his last agony on the cross, after be...
Category

Very Rare Casket Minnekästchen, Southern Germany or Northern Italy, 15th Century
Located in Beuzevillette, FR
Wooden coffret, call minnekästchen, engraved with a dog, a hare and foliage with polychromy remains. During the Middle Age, the hare is a symbol of fertility, joy and represents the...
Category

Mid-19th Century French Patinated Bronze Mortar with Original Pestle
Located in Dallas, TX
Grind spices in your kitchen with this beautifully carved, antique mortar; crafted in France, circa 1850, and made of bronze, the bowl is round in shape with a wide mouth at the top,...
Category

Chest, Leather, Wrought Iron, Textile, Wood, Spain, circa 1500
Located in Madrid, ES
Rectangular body casket with semicircular lid made of carved wood and covered with a worked leather that has been reinforced with a series of forged iron fittings, material in which ...
Category

Stunning Handcrafted Late 1800s Gothic Casket with Peacock & Gargoyle Sculptures
Located in Lisse, NL
Beautiful and rare Gothic Revival treasure box with bronze handle. If you are a collector of antique boxes and/or if you are looking for an extraordinary jewelry box to grace your c...
Category

Large Gothic Mirror or Painting Frame, California, circa 1900
Located in San Francisco, CA
Gothic style mirror or picture frame, black with white accenting. Originally from a California Church framing Stations of the Cross, frames are stained pine, the Roman numerals can b...
Category

Large Size French Wall Crucifix / Jesus Christ on the Cross with Crown of Thorns
Located in Lisse, NL
Antique large size sculpture and an impressive, religious work of art. Looking at Christ suffering like this, the crucifix (in our view) is a symbol of what 'telling people the trut...
Category

Most Stylish Large & Quality Carved Wooden Art Deco Corpus of Christ on Crucifix
Located in Lisse, NL
Large crucifix with stunning hand carved details and an amazing patina. This remarkable and large corpus of a deceased Christ on the cross is truly unique in its style. The artist w...
Category