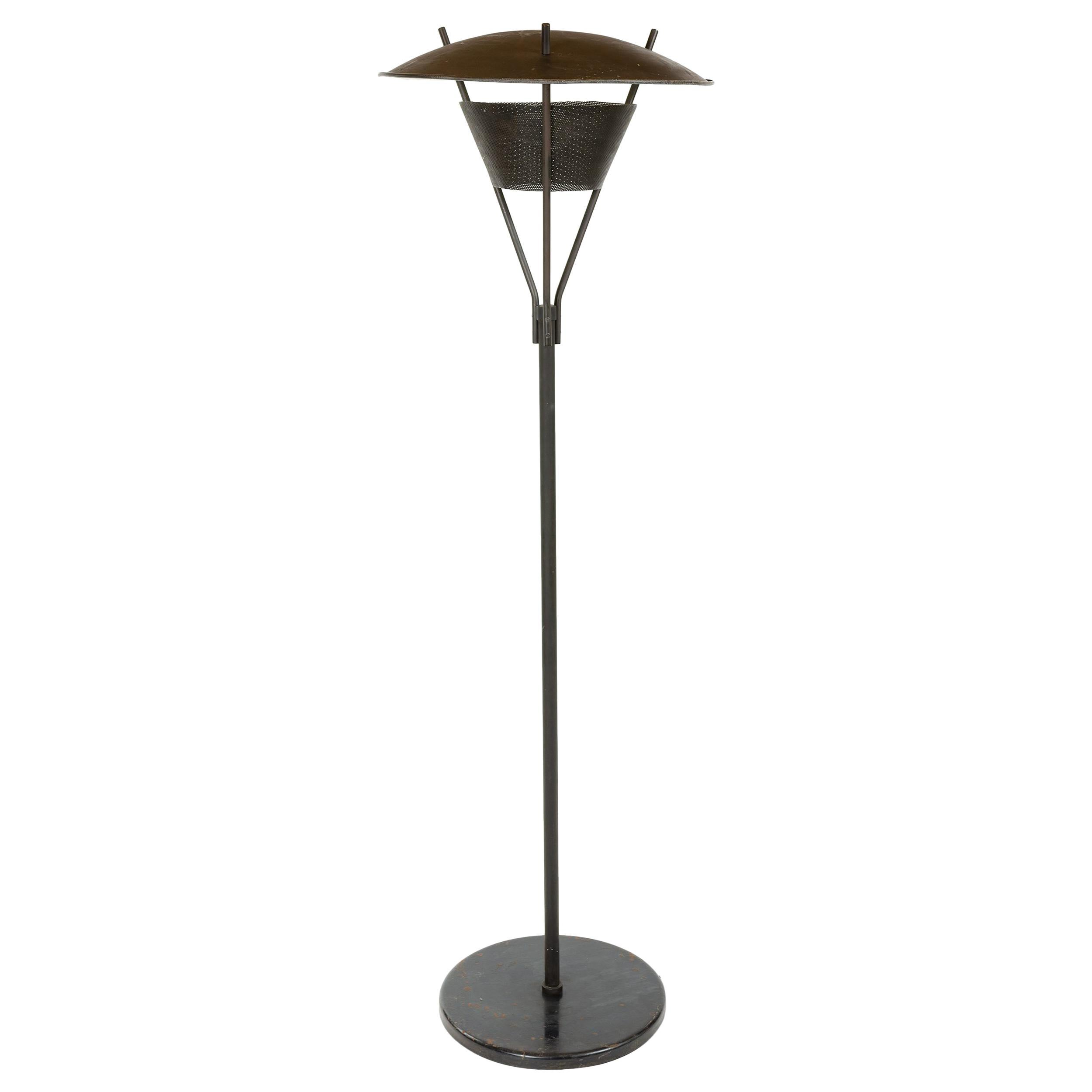 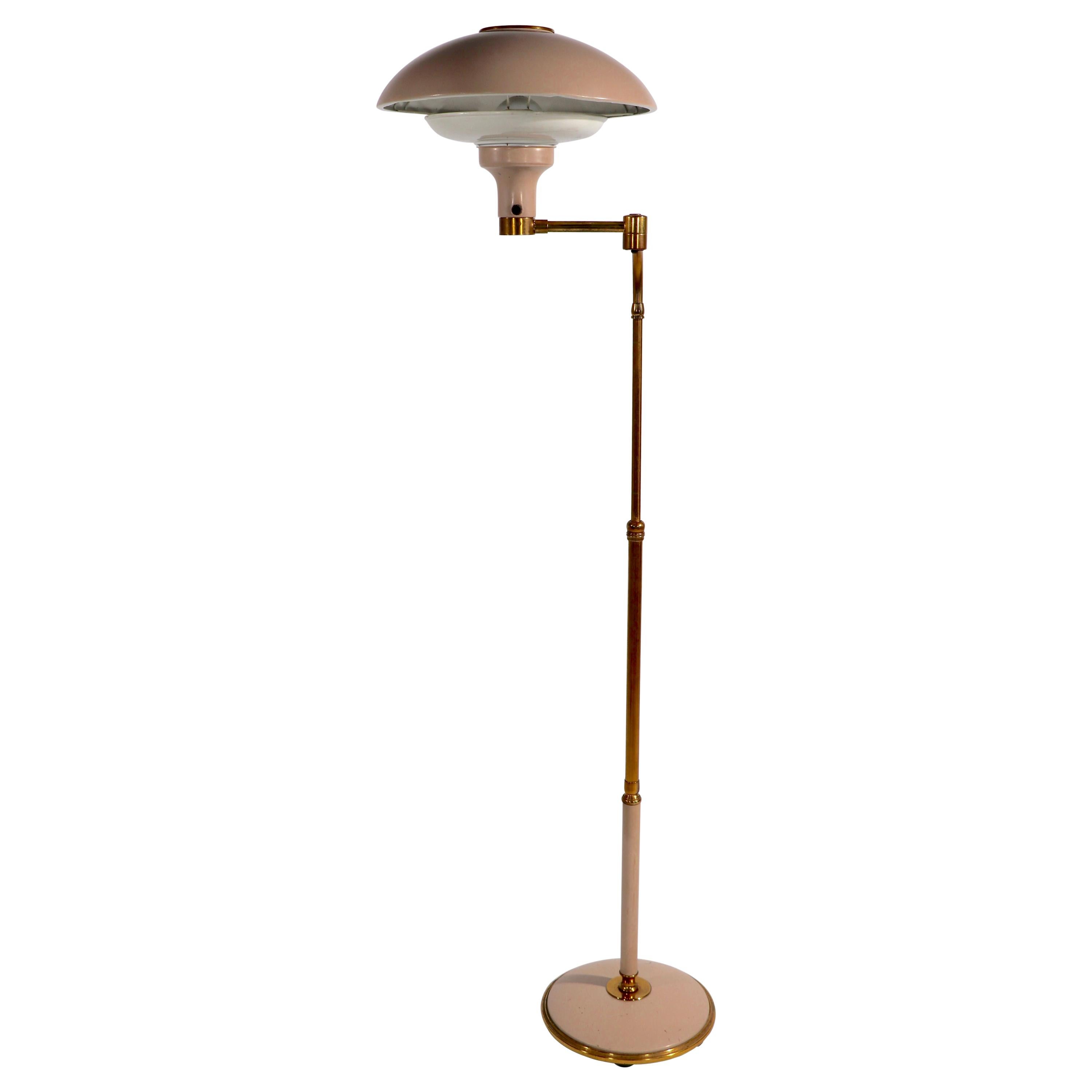 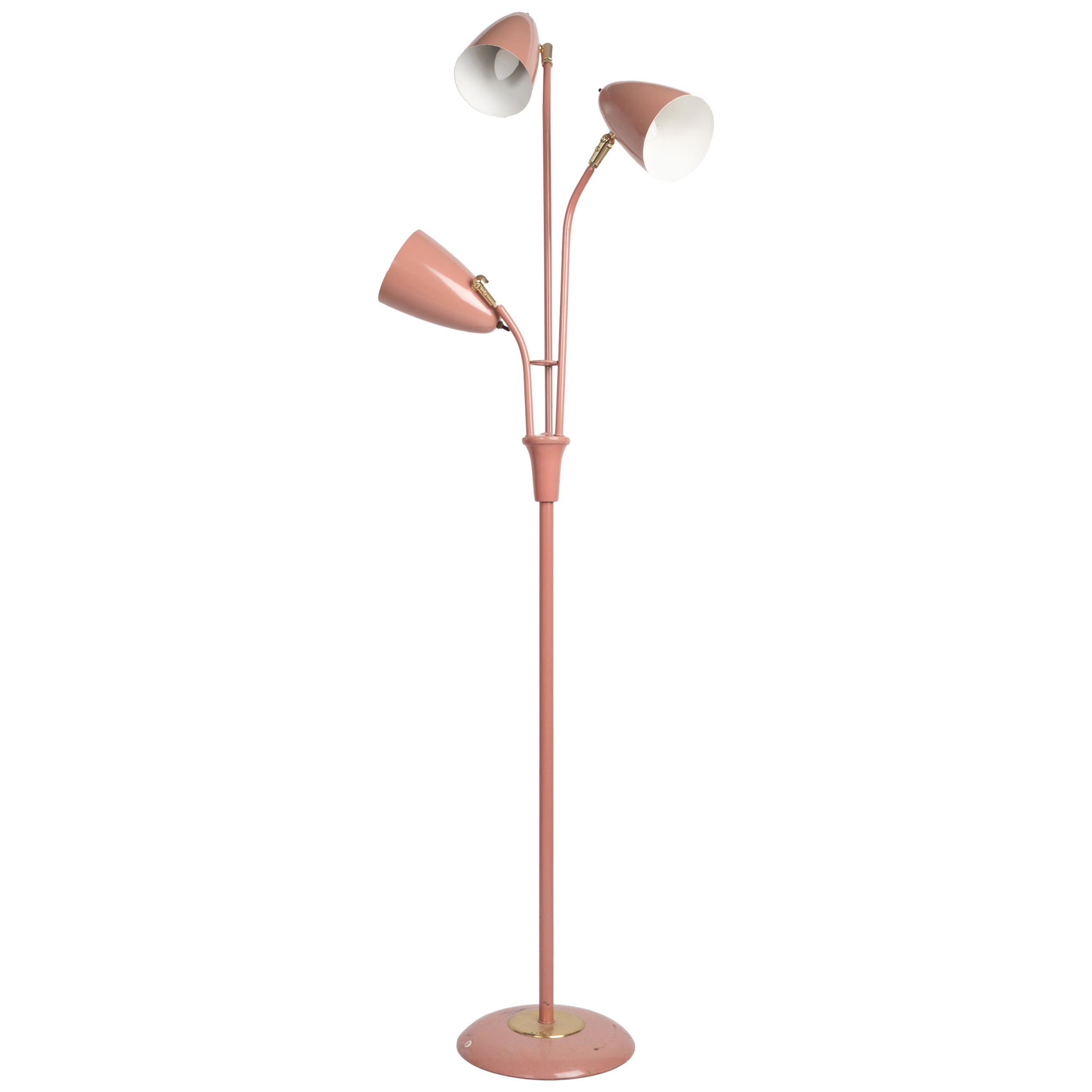 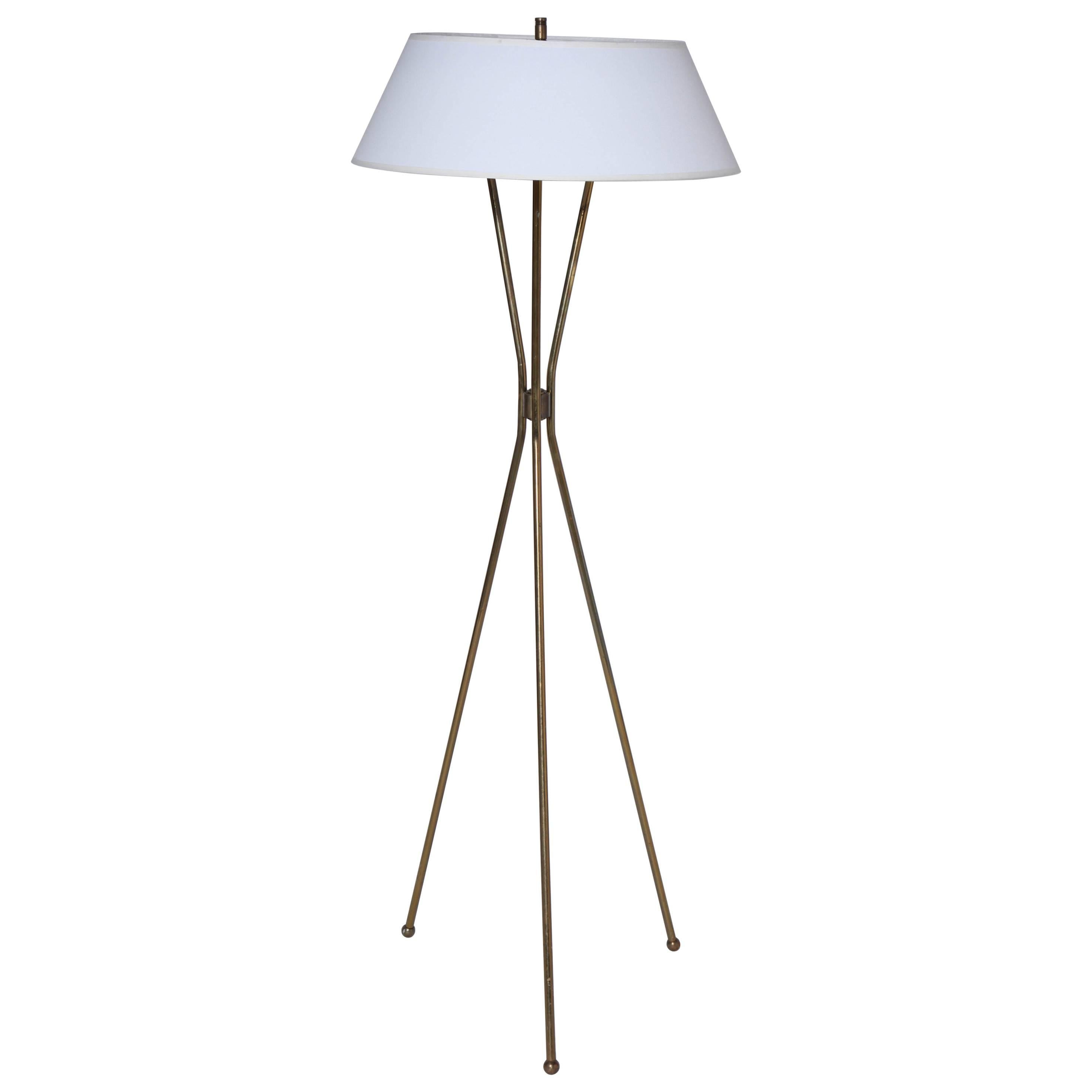 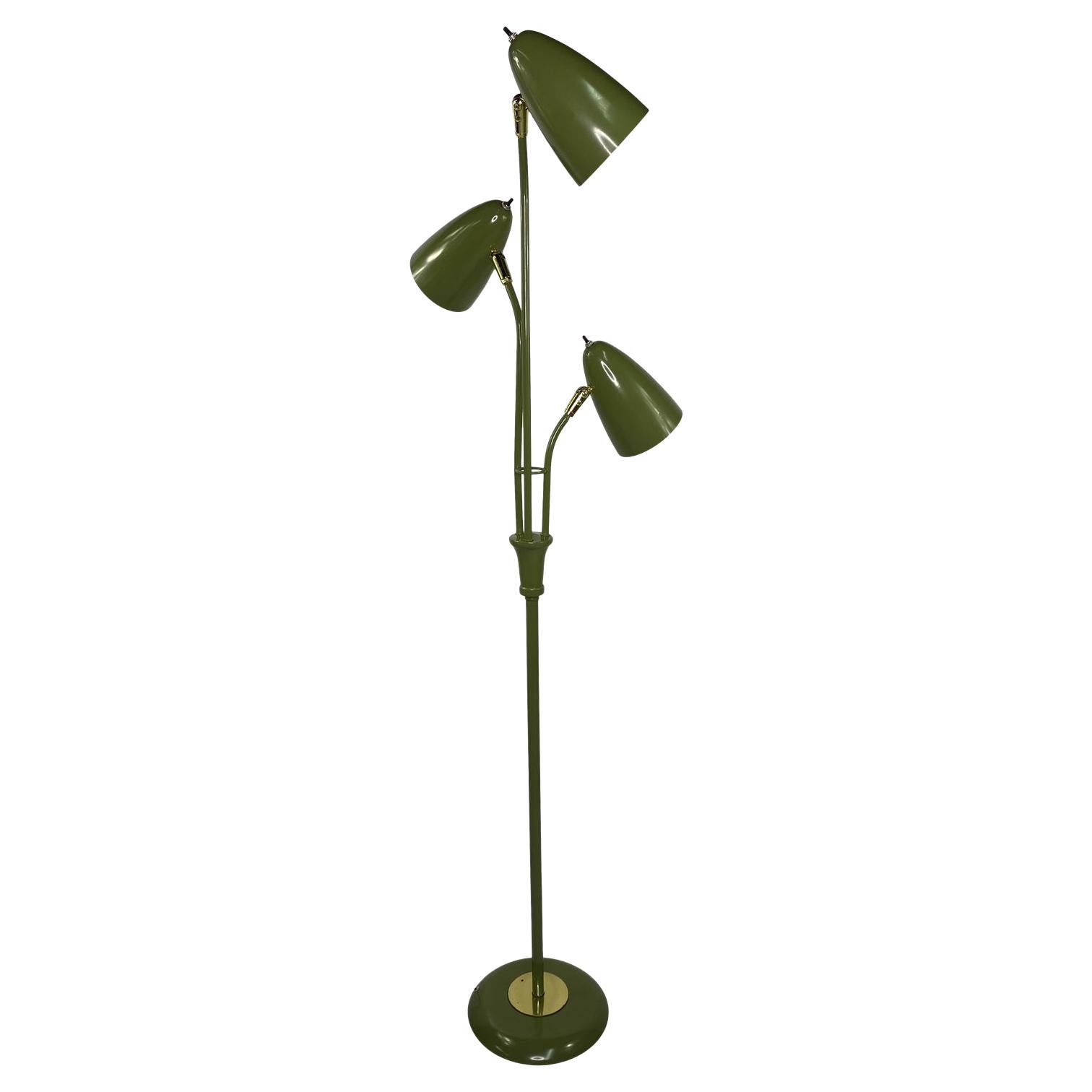 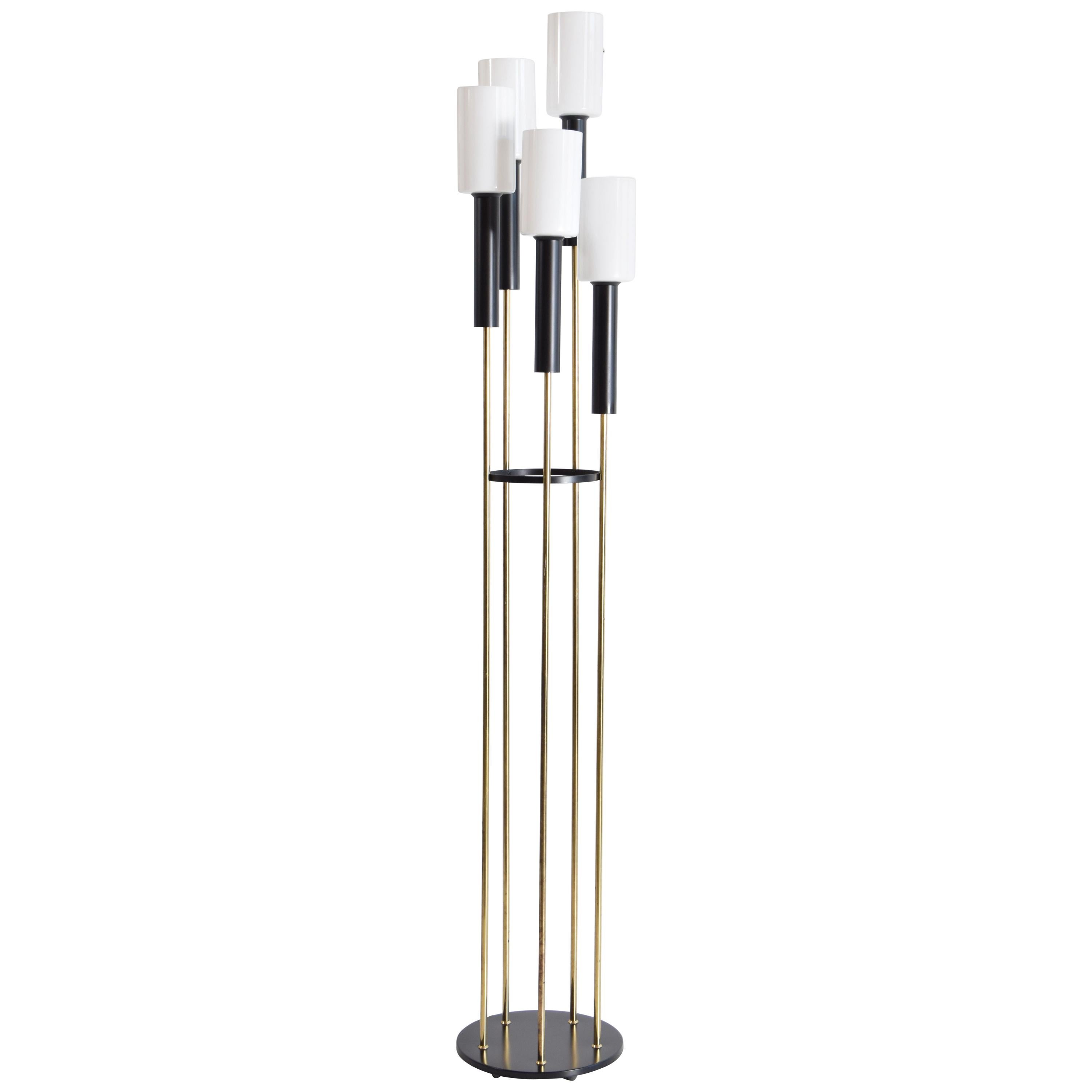 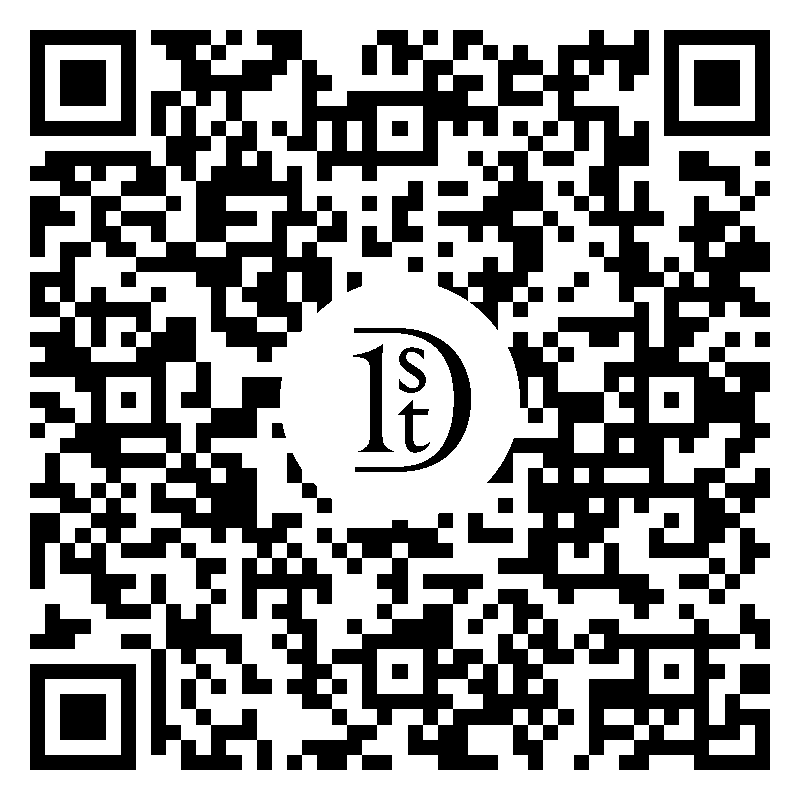 Classic uplight torchère floor lamp with three vertical brass rods supporting a shallow brass bowl and wider glass shade. The base designed by Gerald Thurston with a textured, fire annealed enameled glass shade designed by Carl Moser from his Claremont collection. The shade was produced by the Claremont Kilns with fire annealed and smoothed edge for permanence. The glass shade conceals a perforated brass collar around its three Edison style sockets which aids in diffusing the light evenly across the shade eliminating bright spots. Model: 8189. 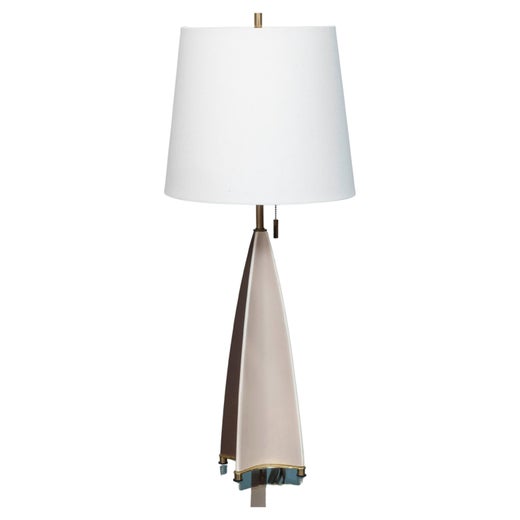 As the leading designer at Lightolier during the postwar building and design boom, Gerald Thurston created his clever lighting — sleek floor lamps, table lamps and desk lamps— to suit the American lifestyles of 1950s and 1960s. His designs were at the forefront of the mid-century modern lighting revolution — like much of the visionary work being done at the time in furniture and interiors, Thurston’s fixtures are both elegant and totally innovative, reflecting the exploration of new ideas and new technology that consumed designers of the era.

Thurston eventually led a stellar team of international lighting designers at Lightolier. He was important to the pioneering East Coast-based electric lighting company, and rumor has it that because he sketched every design on craft paper, the manufacturer insured his right hand for one million American dollars.

While enrolled in the School of the Art Institute of Chicago during the 1930s, where he earned his degree in industrial design, Thurston worked as a freelance designer for the Zenith Radio Corporation. Once he graduated, he found a position at the New Metal Craft Company. There he designed custom lighting fixtures and decorative objects for architects and interior designers.

Lightolier enticed Thurston to join them in approximately 1950. That same year, New York’s Museum of Modern Art featured a green floor lamp of his in their Good Design Exhibition of 1950. The sculptural lamps that Thurston created for Lightolier are representative of his interest in Scandinavian modernist lighting as well as the revolutionary designs produced by postwar Italian companies such as Arredoluce and Arteluce. (Lightolier partnered with the latter, and Thurston found inspiration in the work of Arteluce founder Gino Sarfatti.)

During Thurston’s decades-long tenure with Lightolier, he became internationally known for his many designs. His modernist fixtures are characterized by clean lines, vibrant colors and an appealing meld of metals and rich woods. His slender-legged Lightolier Tripod floor lamp, introduced in the 1960s, garnered widespread acclaim, while his whimsical Cricket lamp, with its arthropodan shade and slim brass frame, is wholly versatile — it can be hung as a sconce or positioned on a desk and offers direct or diffused light.

About the Seller
4.8
Located in Sagaponack, NY
Recognized Seller
These prestigious sellers are industry leaders and represent the highest echelon for item quality and design.
Platinum Seller
These expertly vetted sellers are 1stDibs' most experienced sellers and are rated highest by our customers.
Established in 1995
1stDibs seller since 2010
389 sales on 1stDibs
Typical response time: 1 hour
Associations
20th Century Specialists
More From This Seller

Adjustable Floor Lamp by Gerald Thurston for Lightolier
By Lightolier, Gerald Thurston
Located in New York, NY
Classic Thurston design Mid Century saucer top reading lamp manufactured by Lightolier. The lamp can be raised to 52 in, or lowered to 42 in H, the disk shade is 12 in. in diameter, ...
Category