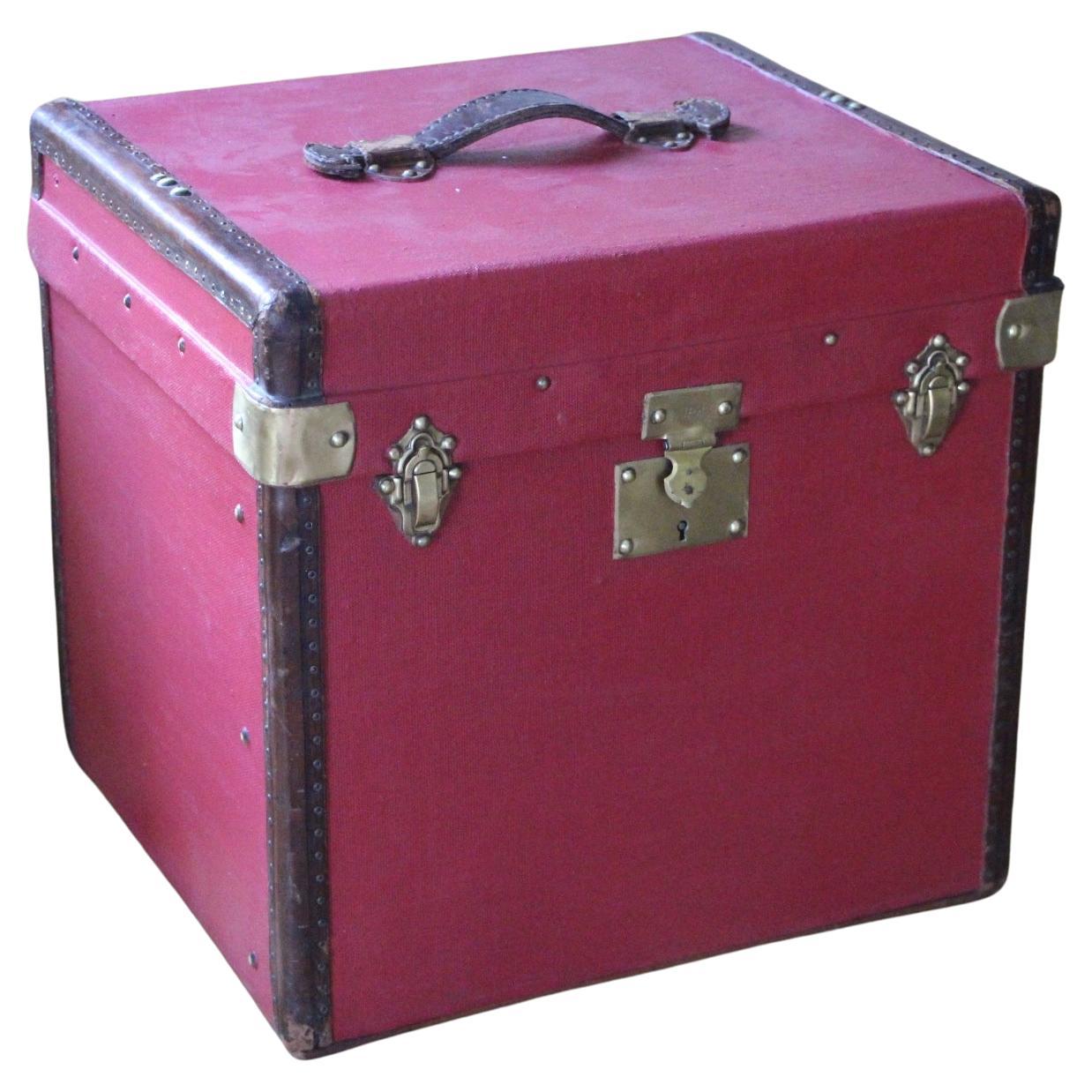 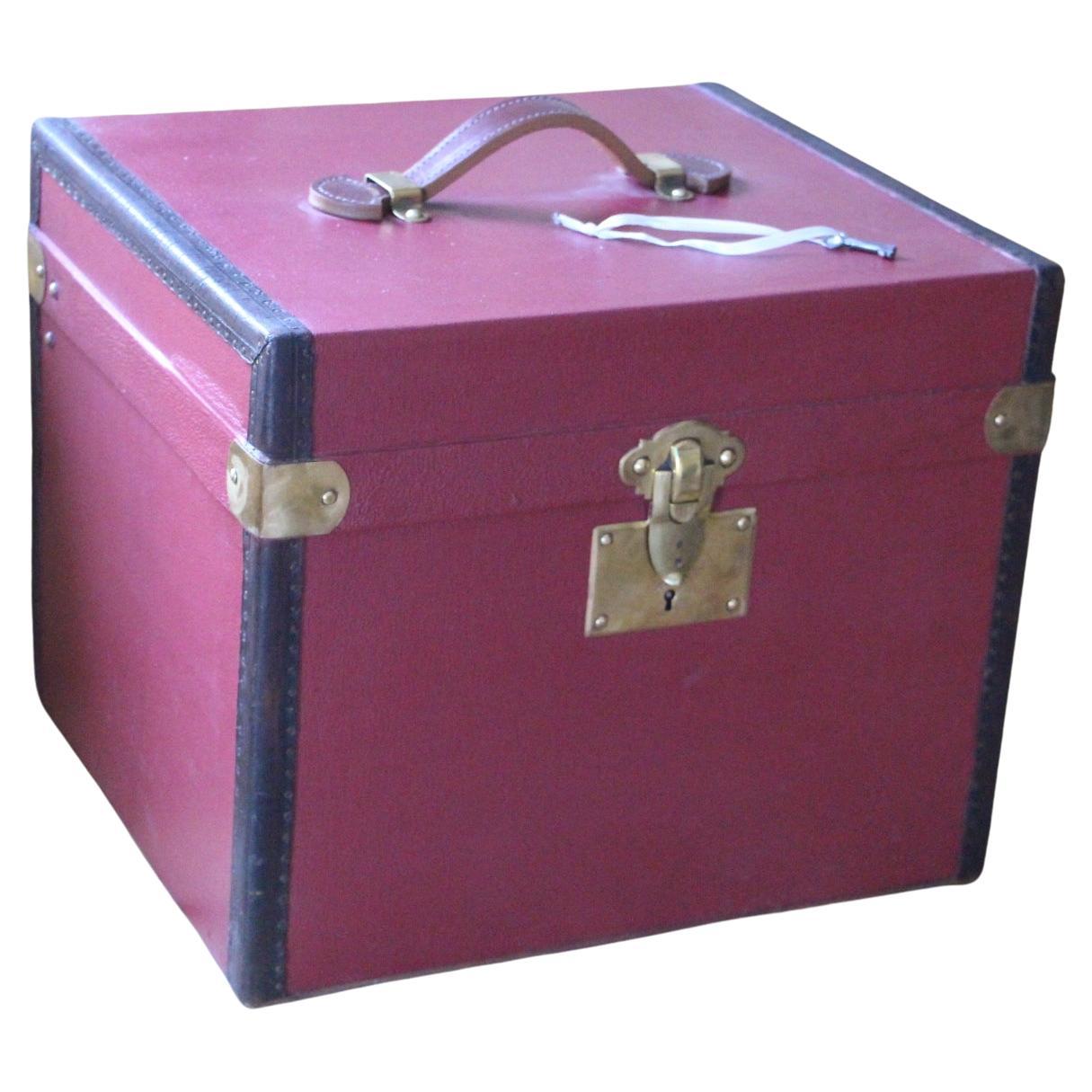 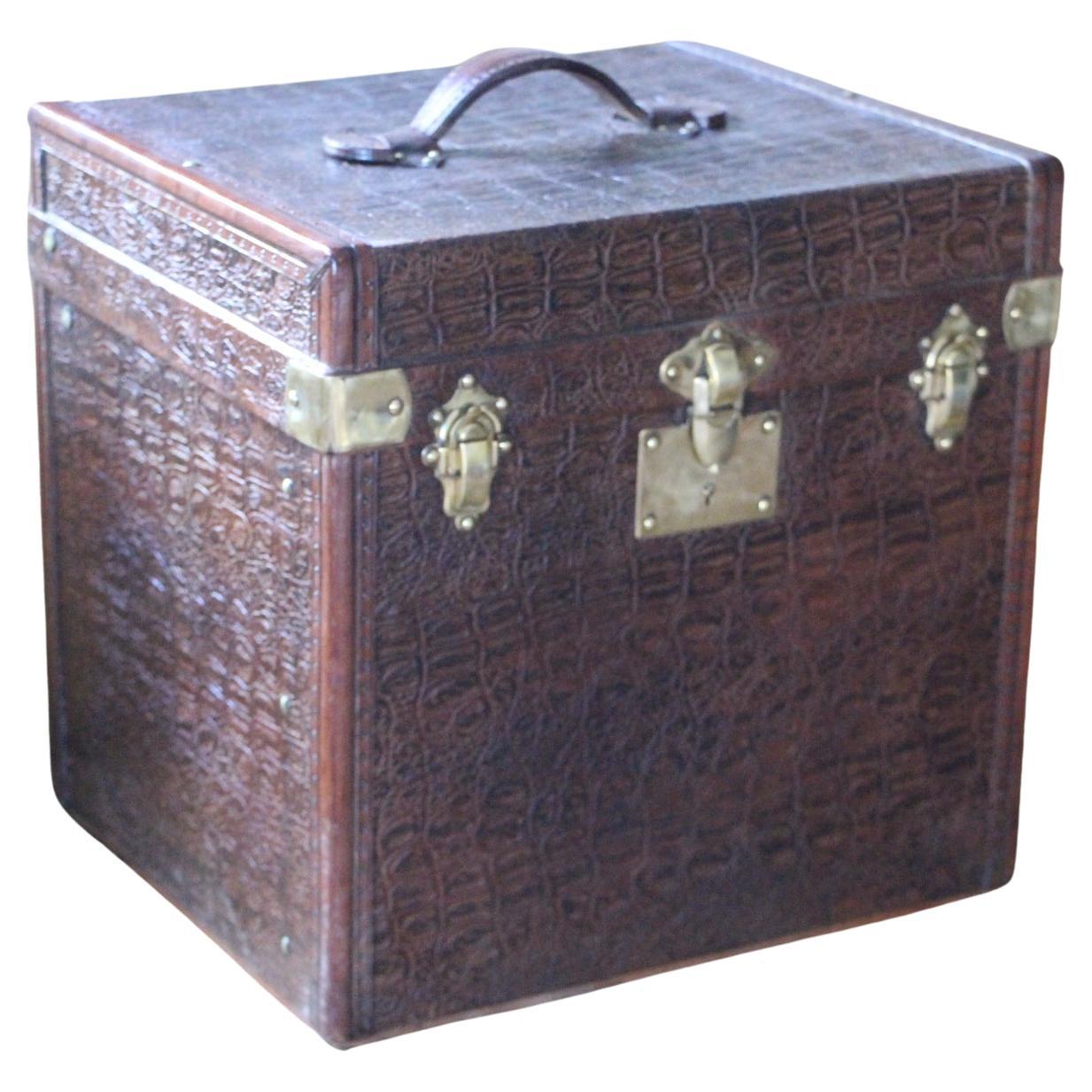 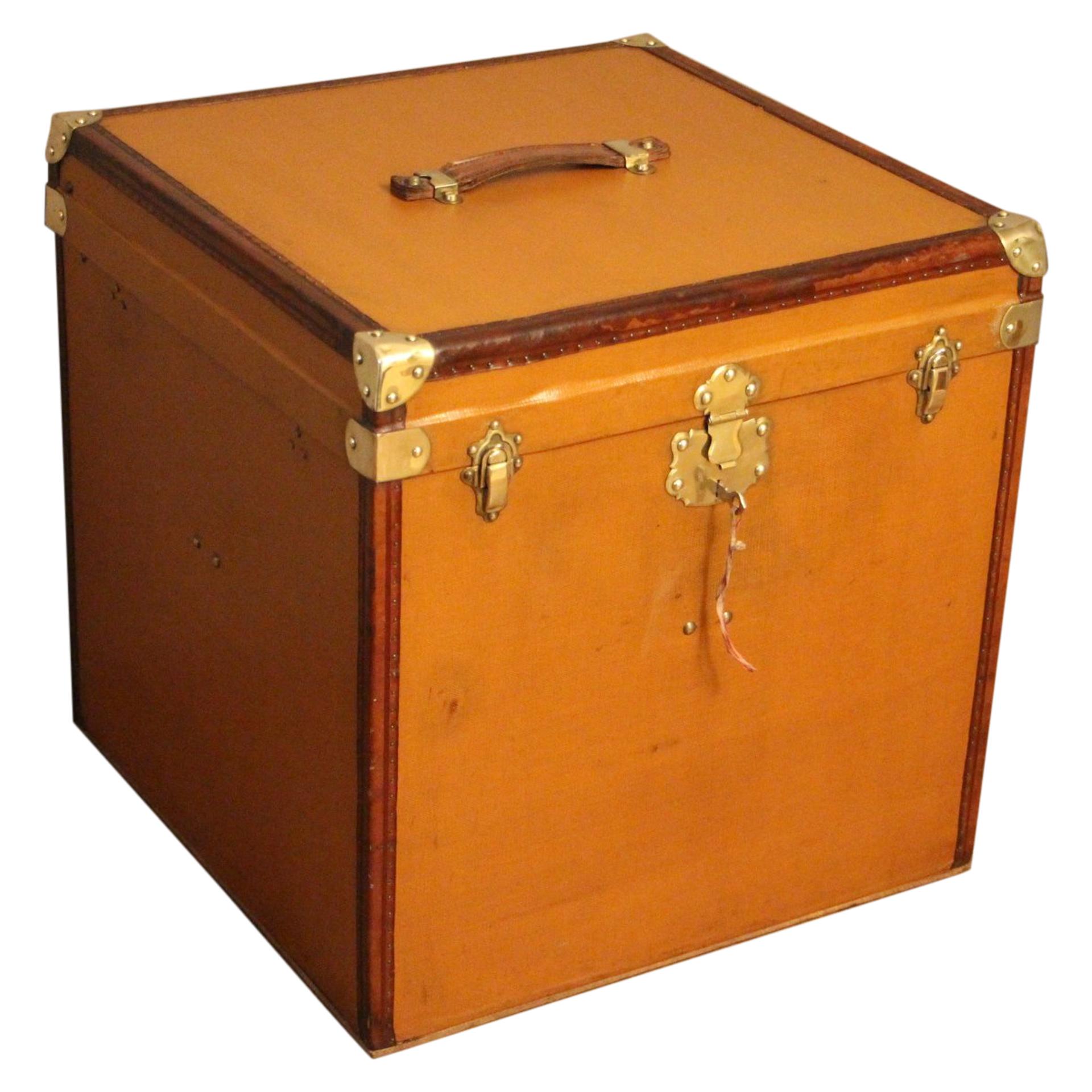 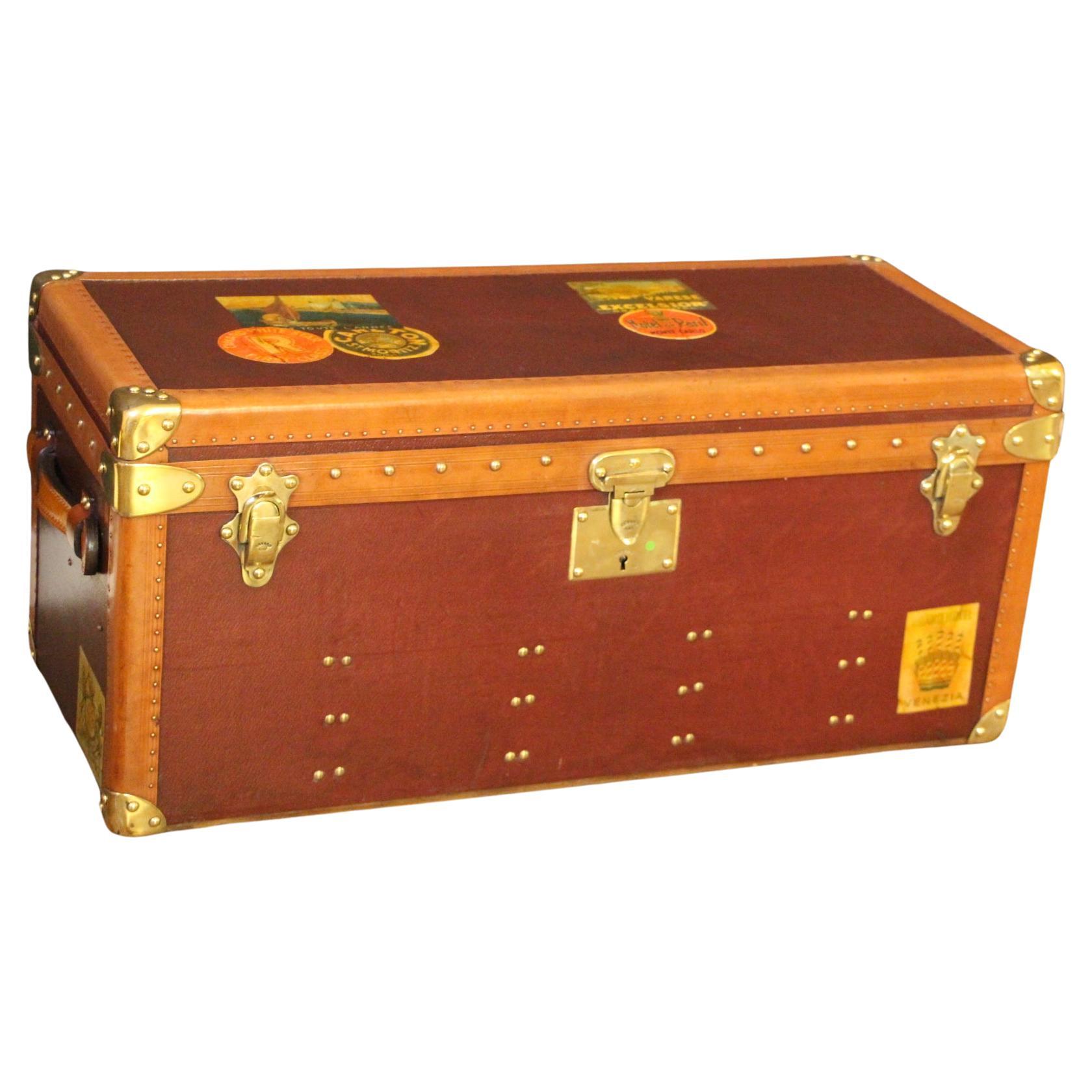 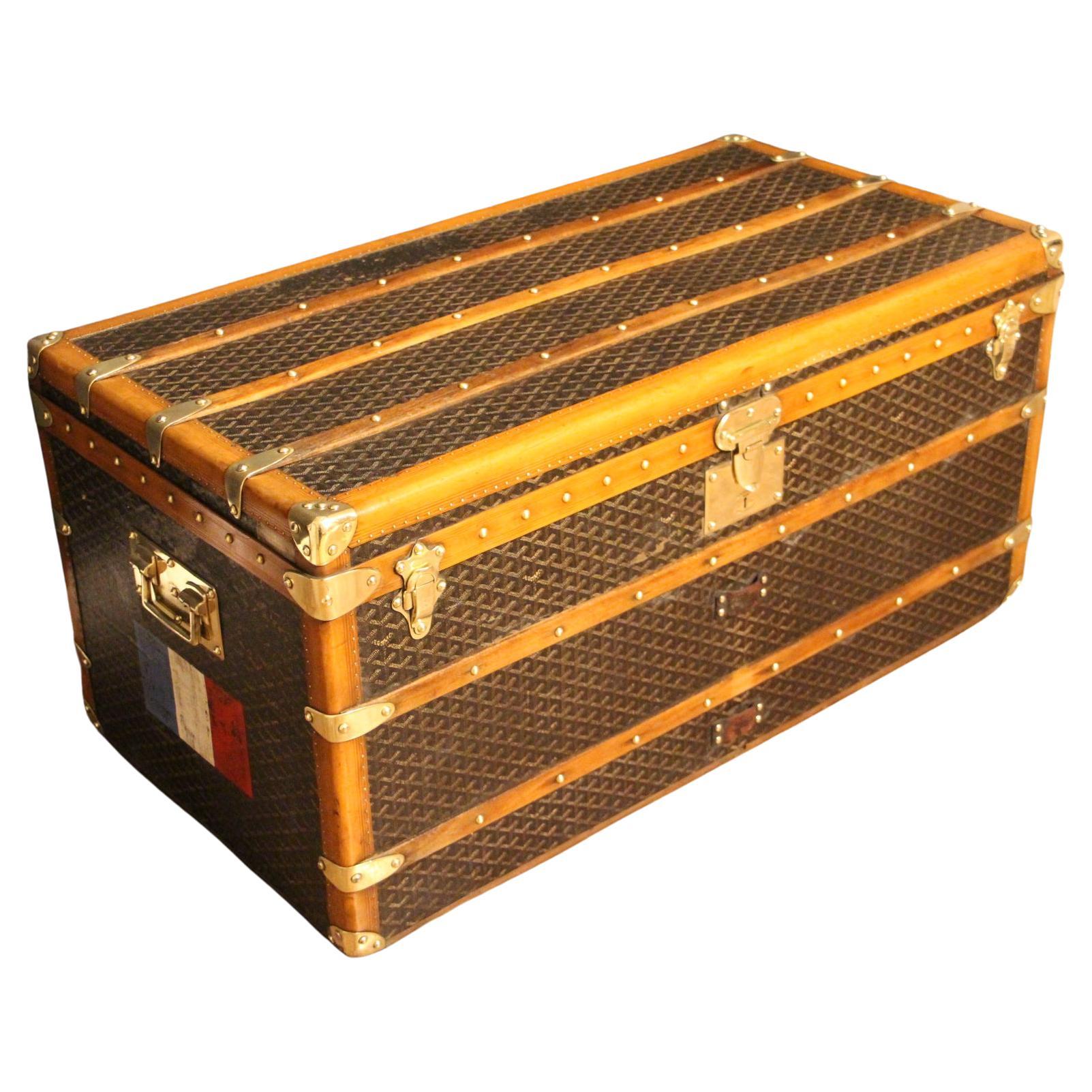 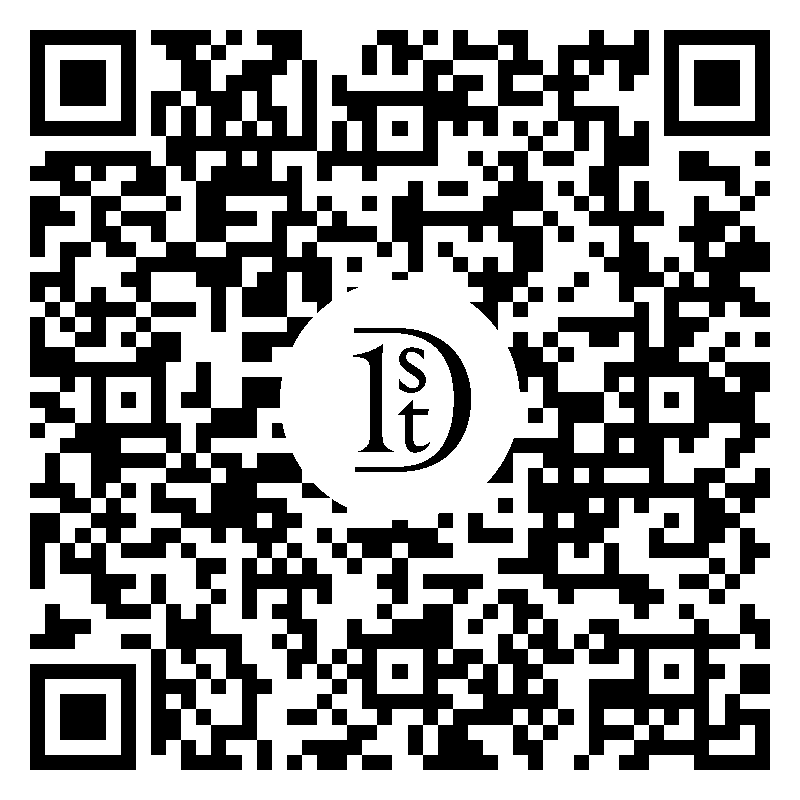 This magnificent Goyard hat trunk features the very sought after chevrons pattern canvas, two leather side handles, solid brass corners and Goyard engraved brass locks. It still has got its original Goyard plaques on each side. Very nice honey color trim. Original interior, original beige linen and removable webbed basket. A couple of stains inside. It could be a very nice night stand or end of a sofa. 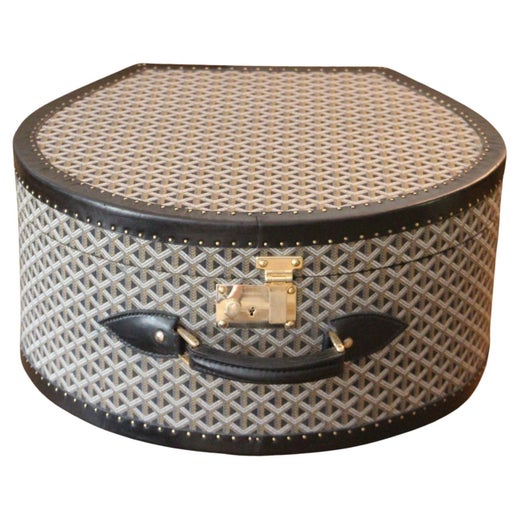 Few brands have stood the test of time as resolvedly as the French House of Goyard, a family-owned maker of luxury handbags, totes and accessories in chic and timeless styles and a vibrant array of colors. The internationally renowned bags were born out of the maison’s original business of making leather goods and other luxury travel wares — once the favorite of the French aristocracy, Goyard trunks are highly sought-after antiques today.

Originally known as House of Martin, the brand was founded in Paris in 1792 by trunk maker Pierre-François Martin. It quickly grew in distinction, and, in 1841, Martin hired and passed on the business to his employee, Louis-Henri Morel. In 1845, Morel himself hired a 17-year-old apprentice named François Goyard, who eventually took over and renamed the company Maison Goyard (House of Goyard).

François' son, Edmond Goyard, ushered the business into a new era when he became the head of the company in 1885. He focused increasingly on elite and international clientele to grow the brand's prestige. Edmond also created a "pet chic" line of Goyard dog collars and other accessories. Perhaps the greatest accomplishment of the younger Goyard was the Goyard signature canvas, as seen on the iconic luxury St. Louis tote. Durable, lightweight and waterproof, it features a distinctive "Y" pattern created from three chevrons or different shades. This revolutionary canvas laid the foundation for the modern brand.

A daring innovator, Edmond Goyard took the brand to the World Exposition of Paris in 1900 and won a bronze medal. Gold medals at the World Exposition of Milan and the Franco-British Exposition of London followed. Goyard continued showing at World Expos, bringing the house even more international acclaim and the attention of esteemed clientele like Pablo Picasso, John D. Rockefeller and the Duke and Duchess of Windsor.

In 1998, the fashion house was purchased by passionate Goyard bag and trunk collector Jean-Michel Signoles. He re-established the brand as a purveyor of luxury bags that continue to garner recognition.

About the Seller
5.0
Located in Saint-Ouen, France
Platinum Seller
These expertly vetted sellers are 1stDibs' most experienced sellers and are rated highest by our customers.
Established in 2003
1stDibs seller since 2014
198 sales on 1stDibs
Typical response time: <1 hour
More From This Seller

Set of Two French 1930s Parchment / Vellum Suitcases as Side Table
By Innovation
Located in Barcelona, ES
A set of high quality French luxury vellum suitcases. France, 1920-1930s. Made in wood and parchment with brass studs and lock plates in brass and leather handles. The one on the t...
Category

$1,406
Antique English Luggage Trunk Side Table with Iron Base
Located in Houston, TX
This antique English luggage piece has been crafted into a side table with a custom iron base. The trunk has the initials CGB on the front and was part of a luggage set belonging to ...
Category

Antique English Luggage Trunk Side Table with Iron Base

$695
English Trunk in Leather and Canvas with Brass Locks
Located in Barcelona, ES
Beautiful leather and canvas trunk with brass locks and fittings. It has two leather handles on the sides and one on the front part. England, Late 19th Century. It has unusual brass ...
Category

English Trunk in Leather and Canvas with Brass Locks

$2,187
Spanish 1930s Leather Suitcases as Side Table
Located in Barcelona, ES
Beautiful set of two brown leather suitcases placed as side / end table, Spain, 1930s. They have leather handles and metal hardware. The small one is a travel suitcase with a gentl...
Category

$2,078 / set
Unmatching Pair of French Suitcases in Vellum and Leather
Located in Barcelona, ES
Beautiful set of two suitcases made of cream leather and parchement, France, 1930s-1940s. Metal locks and studs and leather handles. The small one is made in vellum. The large one...
Category

Unmatching Pair of French Suitcases in Vellum and Leather